Creating a dot, line, shape with absolutely anything, and putting it on something be it paper, cloth, or your body; that’s the idea of mark-making.

There are various ways to achieve mark-making, and there are many techniques that gain different results, be it gestural and loose forms, or structured and disciplined lines. Artists can use thick and black lines or create grey and somewhat ambiguous blotches to show different sorts of emotion; there’s no limit to how one can deliver their emotions through ink and tool.

I looked up several artists and their methods of mark-making, and everyone had such different techniques and personalities that made their pieces so unique. One such example is Franz Kline, an American artist who had started out as a realist. 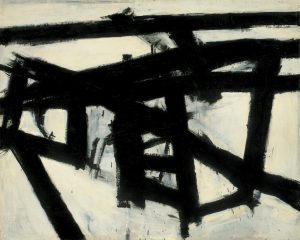 Franz Kline was known for his minimalistic black and white works, moving on from his realist style for a more abstract approach. His mark-making consisted of thick, bold strokes, often in an extremely dark and deep black ink. Many have said that his works were likened to Japanese calligraphy, with the lines differing in thickness but remained equally strong and controlled.

On the other hand, Cai Guo-Qiang made use of gunpowder explosives on top of paper to create his artworks. 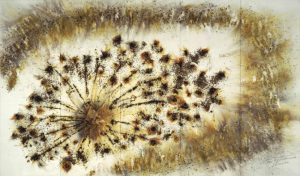 A Chinese artist based in New York, Cai Guo-Qiang wanted to express the idea of primordial chaos using natural forms of energy. Despite its destructive nature, his works tend to give a softer feel compared to Franz Kline’s harsher strokes; due to its lighter shades of brown from the gunpowder, and the dust fading away from the center of impact.

I have also looked up on various mark-making tools that others have used, and how they have affected the various marks made on paper. 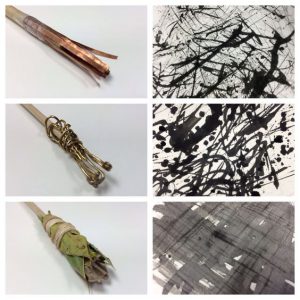 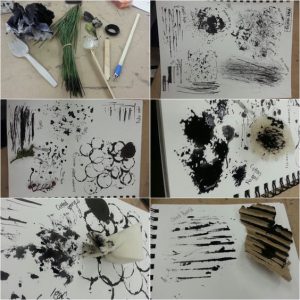 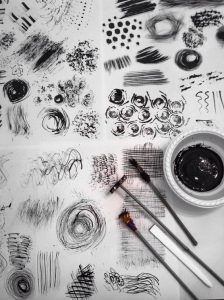 One good way to start is to play with texture and use all side of your mark-making tools. Feel free to get big splotches of ink onto paper, or small splatters created from the bristles of grass. Try to achieve unique shapes from the tools. Repetitive patterns can also be used, besides simple dots, lines and shape. 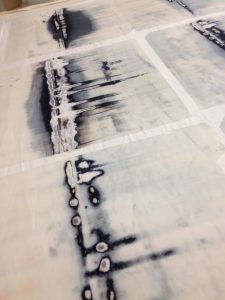 Some have even attempted using different mediums to experiment their tools on. Above, the artist has decided to use cloth as their base, creating a smudge-like effect that drips and stains. The use of white spots helps bring across negative space, which is something I wish to consider doing during my project.

Tools I Have Considered:

After much consideration, I have chosen a few things around the house to use as mark-making tools. Some with more organic forms, some more hard-edged, or some in between.

BUBBLE WRAP: A nostalgic piece from childhood. Everyone always has the urge to press on those bubbles, and it gives off a somewhat calming atmosphere when you are in your own world like that.

CDS/BROKEN CDS: CDs are rarely used nowadays; I asked my parents if they had any to spare, and they said I could take all the blank ones. They are cheap and we don’t have a CD burner. “Just take them lah!”

FACE GELS/BODY LOTIONS: Something to mix with ink to hopefully create a different consistency.

GLASS PEBBLES: They came from a part of my polytechnic days when each of our campmates would give it a well-wish and pass it on to you. They all have different shapes, although the texture is smooth.

METAL CHAIN: Given its interesting form, it is possible to create something unique out of its flexible shape and hard smooth surface.

FLUFFY FINGERLESS GLOVES: An essential for the easily-chilled. Curly fur bits can be used as a sponge, and further dabbed into a softer grey.

PAPER CLIPS: A simple daily object. Perhaps grabbing a bunch of them to use as a singular tool might create something interesting.

CLINGWRAP: Could be used in various ways; bunched up, rolled up, scrunched up like a tissue, etc.

WASHI-TAPE: I am considering using this to take ink away from certain parts.

BODY PARTS: Expression starts with the body. Why not use it.

There are many other sorts of mark-making tools out there that I might use in the future, but for now these are the few I will try experimenting on. 🙂

I had a few in mind, although I’m always open to the idea of being open-minded. See what we can get, right? But here are the few emotions I wanted to explore; and maybe I can get something out of it. Meanings are still somewhat vague; I know, I will work on it.

Infatuation
an intense but short-lived passion or admiration for someone or something.

Basically speaking, it’s the short burst of lust that occupies the mind, which gets mistaken as a form of puppy love, ain’t it? Infatuation is a young emotion. A… somewhat pure, but yet mature emotion. It gives off the sense of youth, with its energetic behaviour.

Think of it this way: Long. It’s been a looooooong time. It’s like being stretched over a pot of boiling water, and your muscles are aching and you really want to snap. It hurts in a slow and seething sort of way, like your torso wants to give in from the tense feeling and you yearn it, yet can never get rid of the strings that hold you up above the pot.

Eagerness
enthusiasm to do or to have something; keenness.

Relief
a feeling of reassurance and relaxation following release from anxiety or distress.

It’s basically holding a big ol’ dump for hours and finally letting it all go. I can’t explain this any better.

Amazement
a feeling of great surprise or wonder.

Amazement could mean something respectful, or just all out awe. Like woah, this building is amazing. Or something like bewilderment that has the shock factor in it. But I’ll personally prefer amazement that goes like woah, COOL, I GUESS.

Bitterness
anger and disappointment at being treated unfairly; resentment.

Like when your sibling gets something despite being younger. In other words, in teen lingo these days; salty.

Exasperation
a feeling of intense irritation or annoyance.

Ever get that feeling some point in your life when your parents don’t understand why you chose art for a living? Yeah, that. No matter how many words you try to use to explain why you wanted to survive on art, they will always remember to pick at you for it and you just sit there, kinda angry but somewhat speechless.

Anguish
be extremely distressed about something.

It’s like having a thing stuck in the back of your mind; like someone said: your hall has strangers coming in and out recently. Did you lock the door. Possibly, but you aren’t sure. Did your roommate lock the door. What if they didn’t. Oh god, they didn’t, didn’t they? Now your money is gone, your life is ruined, and that one piece of work you left on the floor could be in smithereens, your grades are now in the drain, and it’s because you weren’t sure if you locked the darn door.

Neglect
fail to care for properly.

Apprehension
anxiety or fear that something bad or unpleasant will happen.

Somewhat pacing, somewhat back of the mind thing again; but this time over the future. You could have done everything right but the possibility that you were born under the star of unlucky circumstances always haunts you. You pace every corner of the room because the ceiling fan could fall on you any time.