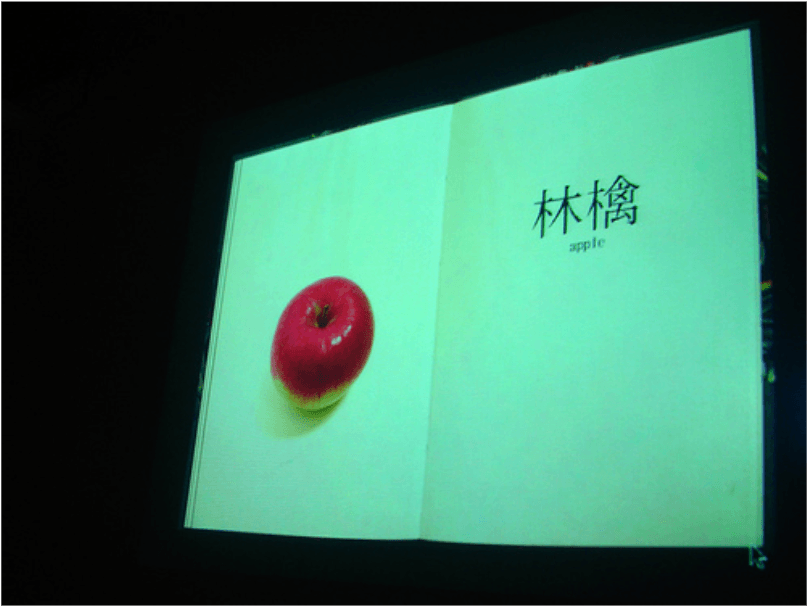 The first artwork I have chosen is made by Masaki Fujihata, known as Beyond Pages (1995 – 1997).  In this piece of work, the audience enters a space that sets a scene of a dark room. There is a physical desk that one can interact with, that has a digital screen that projects a book. The audience member is made to sit on a chair. To interact with this book, one must use the pen provided, which triggers the turning of pages and the manipulation of images within said pages. 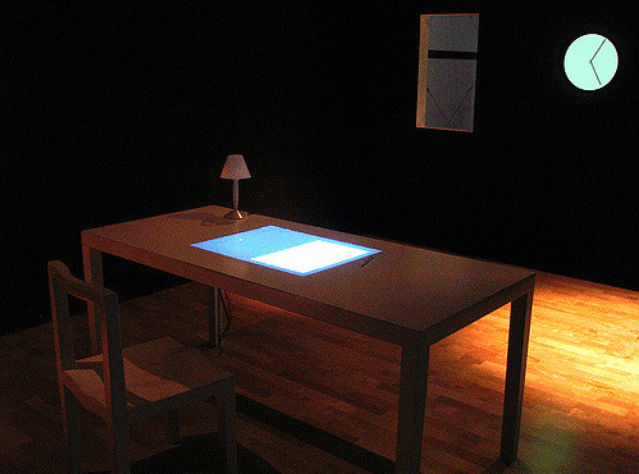 Why do you find this artwork or project intriguing?
As one interacts with the book given to them with the special pen, the images change accordingly. For example, an apple when tapped, will produce a biting sound, followed by the imagery of it being bitten into, exposing its insides. This gives the sense of it having been eaten despite it being in a ‘different realm’, which I find very interesting.

What is the situation or interaction created for the viewer?
The viewer is absorbed into the scene, such as one is absorbed into a book when reading. By interacting with the images on the book, it would either manipulate said images, or cause a reaction by an object nearby.

What is the intention of this interaction?
As Jeffrey Shaw says: “Beyond Pages definitively and convincingly shows us that our information spaces are no longer bound within their traditional wrappers (book, stage, screen, canvas, etc.) – instead they can manifest themselves as ubiquitous presences that move between and link together the totality of things in a new imaginary of being.”
This explains the title of the artwork, “Beyond Pages”, where a book is not conformed to its pages, and can exist as more than its paper self.

What is the role of the viewer?
The viewer has to be present in the chair, and interact with the piece using the designated pen. They react to the piece according to their own experiences, watching as a lamp lights up through a light switch present in the book, or a clock speed up when a hourglass is turned.

Who has control over the outcome of the artwork or project? Is it the creator / artist or the viewer/audience?
The creator plays a bigger role in creating the piece, as every interaction is pre-programmed to work a certain way. However, the audience plays a definitive role and the viewing of this artwork. The interaction does not have to be done linearly for the desired effect, but it is up to the viewer to decide what way they wish for the piece to do. This allows the viewer to experience their own thoughts and feelings about the artwork, and for them to have their own opinion on what they might think the artwork might be about. 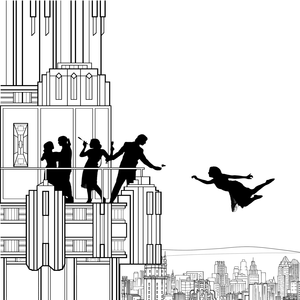 The next artwork is Scott Snibbe’s Falling Girl (2008). It is an immersive interactive narrative installation that allows the audience to be part of a story about a young girl falling off a skyscraper.

Why do you find this artwork or project intriguing?
The artwork tells a narrative, while also being interactive.

What is the situation or interaction created for the viewer?
As the young girl falls, she reacts to people who are in the skyscraper. These people are seen as silhouettes in the apartment windows, who are of the audience captured by a camera. The viewer is allowed to do anything they wish in front of the wall which would then be projected in a designated window, which the girl reaches out to.

What is the intention of this interaction?
The installation is part of a series known as “Visceral Cinema”, in which the language of film is translated into meaningful narrative interactive experience, where one’s emotions are evoked while also being aware of their own body’s experiences.

What is the role of the viewer?
The viewer’s body plays an intimate role in the narrative, and they are rewarded with a sense of presence within the film. The shadows all act as neighbours witnessing the falling of a girl. This compels them to better understand the work, and to watch it to the end where by the girl eventually reaches the ground.

Who has control over the outcome of the artwork or project? Is it the creator / artist or the viewer/audience?

The creator has greater control over the outcome, as the experience is rather linear. Within the piece itself, there are periods of time which none of the viewers can interact with, as it is part of the story that has been planned beforehand. The ending remains the same no matter the number of viewers. Only the experience of the audience changes based on their perception of the piece, along with the aesthetic of the artwork depending on what the audience does. 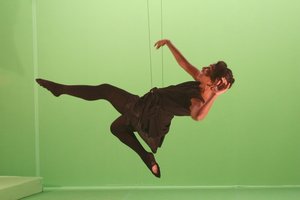 Come up with 2 thoughtful questions in your essay that will benefit the class with regards to this week’s topic on interactivity.