Happenings | Disappearance at the Bar Gallery, felt like a trip to another world. And I do not mean in a good or bad sense, but rather, just an odd one. I had brought a friend from outside of school along to witness the performance, and upon arrival, spent the majority of it trying to point out things that were happening, with zero context to anything beforehand. I had been hoping that the piece would be self-explanatory when I arrived, but it was the opposite, and an hour was spent trying to guess its complicated message. Were we trying to call upon aliens with the soundwaves? Were we questioning technology based on how static works? 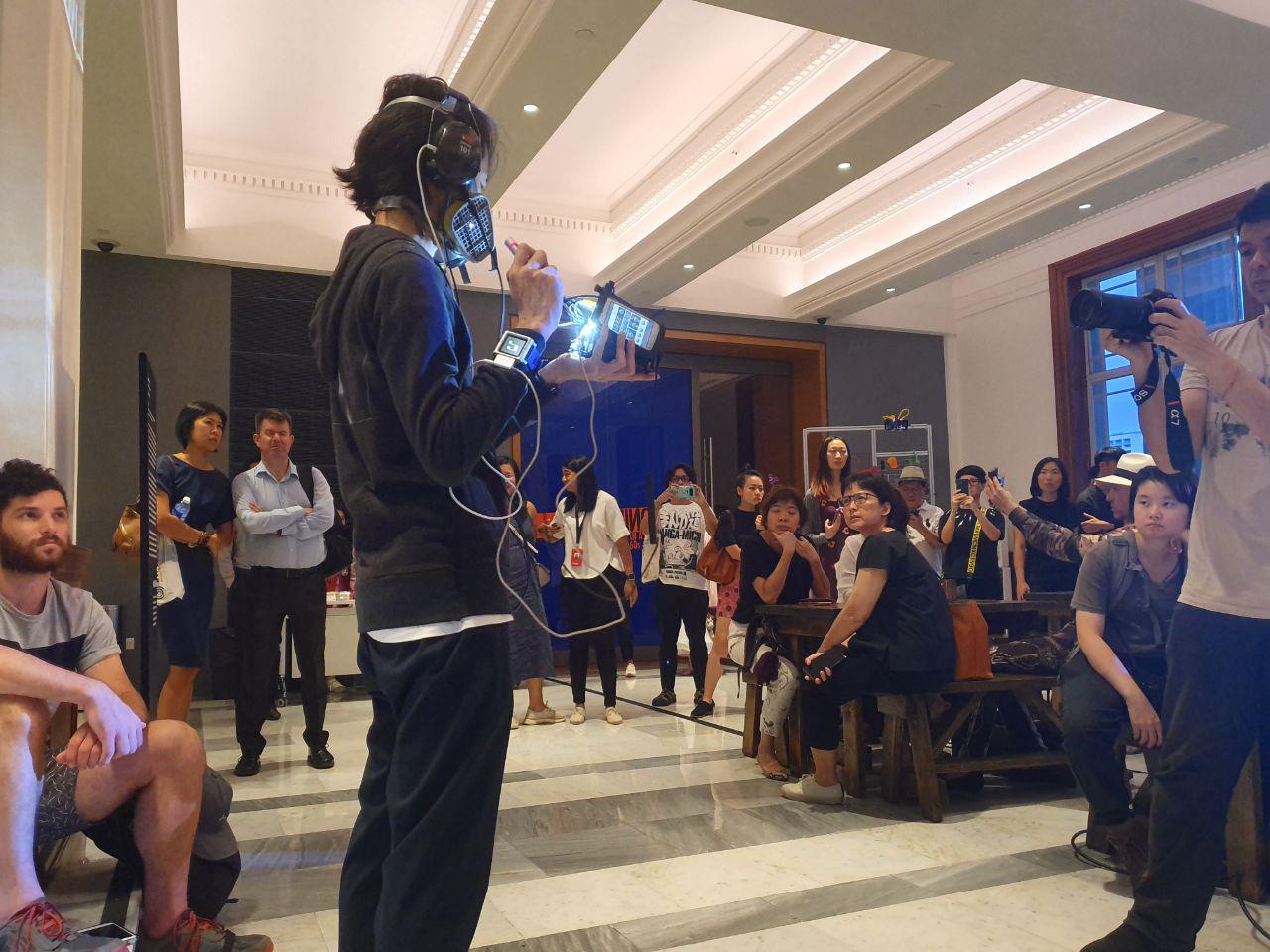 Dude walking around with his tons of static-causing items. On the right is the installation “Disappearance”.

To be honest, I did not even realise that the tables were supposed to be an artwork.  I thought it was just a fancy decision to put them there as a place to rest, and perhaps have a bit of a snack. It was only until class the following week that I realise it was based off an exhibition by Lee Kang Soo called “Disappearance” in 1973.

“Unlike other performance art pieces at that time, Disappearance was completed with the participation of the audience. It was an artwork that overturned the boundary and position of the artist and the audience.

While exchanging glasses between the two of us at a lukewarm bar without any customers except for us, my gaze stayed on the wooden table and chairs. It seemed as if I was listening and seeing the sound of many people and an illusion full of smoke from cigarettes. The traces of rubbing off countless cigarettes on the table and chairs, burnt marks made by hot pots, and incessant mopping by the worker at the bar – all these seemed to make noises together. But all of this disappeared at once. I was there, and my senior was sitting in front of me, but we were there and not there at the same time. I could not prove it precisely. I could not be my senior sitting in front of me, and he could not be me. The bar I was experiencing could not be the same as the place he was encountering. Where were we?”

By buying the chairs and tables of said bar, he had wished to recreate the bar experience, the intimate experience of drinking with his senior, to the gallery in 1973. He basically wanted anyone to sit there for the art to work, an opportunity for the audience to share a memory that was private, from a specific, intimate place.

So in what way was this related to INTER-MISSION and Happenings? How did they co-exist in the same space? I look into INTER-MISSION’s about page to better understand their motive in creating art. They call themselves “an art collective dedicated to discourses of technology in art”, inhabiting the gap between technologically engaged artworks, artists and audiences. They also build “transnational networks to promote sustained dialogue and engagement with media practices, encouraging collaboration, reflection and participation in our ever-changing technological environment through interactive performances, etc.”.

I started to think a little deeper into this, maybe they were finding the ghosts of Lee Kang Soo’s imagination? One of them had been holding tons of recording or sound-making things; the one with the mask. He had also started walking around, putting his arm up to the audience at the Bar, which in response would cause more static noises to come out of his headphones. It felt odd, but being a fan of dumb supernatural shows, static was often used in this context to look for ghosts, in order to communicate with them. Was INTER-MISSION searching for this intimate memory? Was INTER-MISSION maybe instead questioning this intimate memory? Who knows? 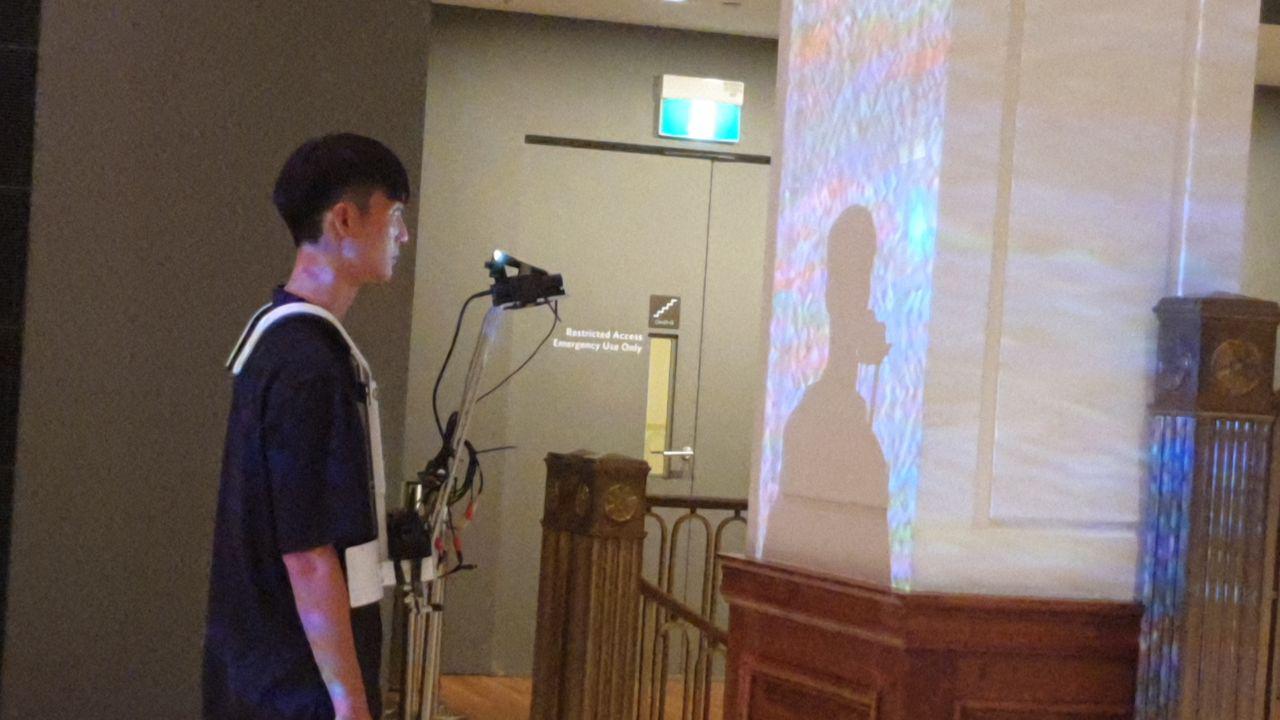 One of the dudes with a camera to his face, which is projected out onto any surface in front of him.

There were also several projections displayed, each changing repetitively and quickly in succession, of different angles of the Bar, and of a live setting in Tokyo. I guess it could potentially be talking about being able to actually experience an intimate setting in today’s world with technology. The Bar at the Gallery would have been very different there. Was the Disappearance now a different meaning interpreted from what Lee Kang Soo had put together decades ago? Was the visual manipulation of these screens a rising question about how technology should be viewed, likewise with its loud static audio? Was the other dude with the camera projection of his face walking around to find some kind of entity, or maybe the purpose of this whole performance?

I looked up INTER-MISSION’s other works, to better understand their message as a group. They often used the same techniques to perform, in reference to their collaborative audiovisual event during IAFT 16/17 but with each performance came a different visual, while the sound… Well, it could be different, since it was not the same place after all. (I cannot tell for the life of me. My ears are bad as is.)

With each piece came a different context, depending on the environment they were in, despite them performing. But from Happenings, I gained a different perspective when given an idea what “Disappearance” had been about. There was a lot to question about the art, and with the performance came a new perspective opened for me. I had googled Happenings and found another performance at NGS, by several performing artists.

“My fellow artists and I found ourselves performing within a bar made almost 50 years ago, for an audience living in modern times. It presented an untrodden path that led to a joyous journey for everyone involved. After the performance, as we stepped out of the bar, we realised that a new door had opened for us.”

It was an interesting look from another artist’s perspective, how they had perceived the art piece and collaborated within that space. It was like entering a different world, time; an alternate universe if you might, in this space. I feel that maybe INTER-MISSION might have felt the same, being in different spaces with different chemistry, and it is something that their work looks into. So while I did not fully understand their piece when I was there at NGS, I guess it was in a way, an arbitrary piece, that I could still interpret bits and pieces of and had my own personal takeaway. It was an amusing experience to say the least, and had many questions, and I do wish to see them talk more about it in detail if they ever would.