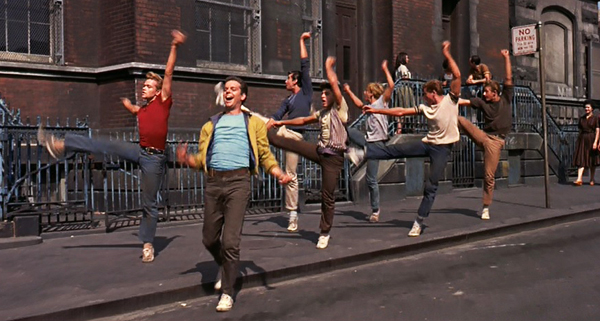 During the lesson on Musical Genre Films, we learned how musicals were a genre where the suspension of disbelief is required from the audiences. This means that as one watches a musical, one needs to throw aside what they believed about the world in order to immerse themselves in the diegetic world of the musical film. Although suspension of disbelief is in fact needed to watch any film, since movie plots are fictional and some even contain out-of-the-world themes and topics, in my opinion, musicals are one of the genres where this suspension is crucial in order for one to enjoy the film, as it is impossible to witness people breaking out into songs and choreographed dance numbers out of nowhere on the streets.

In this response, I will be looking at West Side Story and explaining how this musical film was the first to challenge the suspension of disbelief required in viewing musical films previously.

West Side Story distinguished itself from previous musical films by involving location shooting, with a Prologue opened in New York City and set in the urban streets (Shearer, 2015). Bringing the filming from a studio out into a real natural location, West Side Story introduces realism into the musical film by breaking the tradition of studio filmmaking audiences were used to seeing, such as painted backdrops, highly controlled studio lighting or synthetic looking props. As a result, audiences’ suspense of disbelief is reduced, as the background serves as a reminder of reality, in fact, it is one that is highly recognizable by Americans.

In the prologue where the jets first meet the sharks, as seen during lecture, audiences are expected to draw out visual and aesthetic patterns in the environment that is both an every day setting and an aesthetic space (Shearer,2015), where there is a convergence of aesthetics and realism, such as how the gangs shift from walking to dancing. The non-dance moves, randomness and spontaneity seen in the film highlight the ‘everyday life of the street’ (Berman, 1983). Some scholars even argued that the film deliberately fosters discrepancy between the highly stylized dance moves (a mix of ballet and non-choreography dance) and a naturalistic setting, allowing for a mix of realism and Hollywood studio production style (Shearer, 2015). Moreover, the dance sequence in the prologue mixes characters’ natural movements with choreography, there were many instances characters moved like how any man of the street would, creating occasional distinction from the imagined world. With such distinction, it makes it clear to the audience to distinguish between what is realistic and what is not while watching the film, making them aware that there are natural elements in the film.

Finally, West Side Story explores real life themes and issues such as immigration and racism, and ends with an unconventional sad ending instead of a happy ending that audiences were used to watching in previous musical films. Just as how these social issues remain unsolved and are still negatively affecting lives today, West Side Story shows a realistic portrayal of these social realities. Hence, audiences cannot help it but are made aware of real social depictions instead of entirely suspending disbelief like what they have been used to doing in watching previous musical films.