The two projects that I selected for this “hyper-essay” are ‘The Weather Project’ by Olafur Elisasson and ‘Tree’ by Ai Weiwei.

I will start this text by giving a brief introduction of both projects. ‘The Weather Project’, 2003 by Olafur Eliasson showcases representations of the sun and sky that dominated the expanse of the Turbine Hall. In this project, Eliasson wanted to bring a part of London in to the building, and through the experience and memory of the work, a part of it is taken back out into the city by the viewer.

“Every city mediates its own weather.  As inhabitants, we have grown accustomed to the weather as mediated by the city. This takes place in numerous ways, on various collective levels ranging from hyper-mediated (or representational) experiences, such as the television weather forecast, to more direct and tangible experiences, like simply getting wet while walking down the street on a rainy day.” 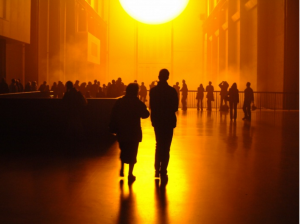 Ai Weiwei’s ‘Tree’ installation at the Royal Academy courtyard, comprised of reclaimed and reconstructed trees from his home country, China.

“Tree has been likened to the modern Chinese nation, where ethnically diverse peoples have been brought together to form ‘One China’, a state-sponsored policy aimed at protecting and promoting China’s sovereignty and territorial integrity.” 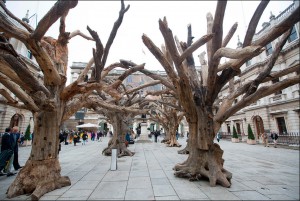 If we were to compare both works, I can find a couple of similarities between them. Firstly, both projects have the purpose to ‘unify’ people. In Ai Weiwei’s case, ‘Tree’ has been likened to encourage ethnically diverse people to form ‘One China’. Similarly in ‘The Weather Project’, Eliasson mentioned that the subject of weather has long shaped the content of everyday conversation. In this project, the topic of weather can ‘unify’ people or even strangers together as commonly, the first talk of a conversation is of the weather.

Secondly, both projects requires a huge amount of time to implement and extensive labour. In ‘Tree’, parts of dead trees are brought down from the mountains of southern China and sold in the markets of Jingdezhen, Jiangxi province. Ai then transports the trees to his studio in Beijing where they are made into trees. Similarly in ‘The Weather Project’, a huge spaced is needed for this installation in the Turbine Hall where at the far end of the hall is a giant semi-circular form made up of hundreds of mono-frequency lamps.

For both projects, I can relate to Ramroth’s five phases of project management. There are clearly the starting point, planning and figuring out how to perform the work, the design phase, production – which in these cases are the most important to how they execute the work and lastly, closeout where the project is completed and open to the public.

Furthermore, I believe that every project has its life cycle. It often requires a substantial amount of time initiating the idea and planning for its whole course. In both projects, I would say that the phase ‘execution’ is the most important as it determines and provides the aesthetic visuals that both artistes planned at the beginning.

In conclusion, I believe that no matter what project, be it small or huge scale, planning a project have to be considered with a few limitations like resources, especially time, budget and execution process in order to produce a desired outcome that can be aligned with the original project scope.

And to quote from Ramroth (2006), ‘ Goals are broad, general, and do not change from project to project.’ Whereas,’ Objectives are specific results against which we measure the project’s success. They express the purpose of a given project.’