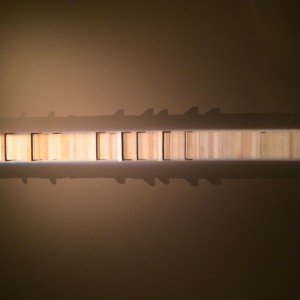 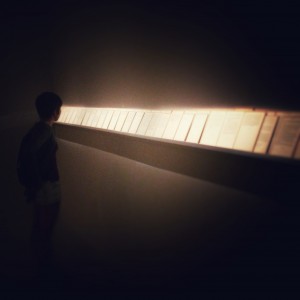 Endings was an installation that used pages of book endings with wooden frames. All the frames are displayed on a shelf.

At first glance, it seemed that the stories are connected. I thought there was a hidden message in the pages or a common theme in the story. It’s actually very interesting how Bunoan made use of an item that would not really be thought of as an art piece, put a spin on it to give it dimension and meaning.

After reading the description, I think the artist was making a point regarding stories in general. Not just novels, but people’s stories, relationships. It was very interesting point that she brought up.

“What is closure without context?” A very profound and philosophical insight into stories. Is there a story if we only know the ending? Is it as satisfying?

No Endings is an intallation consisting of a stack of books that reach high up into ceiling, the spines facing the wall so the audience does not know which stories it is. My first impression of the work was that it was about endless possibilities since you do not really see where the pile of books end. It is cleverly covered by a part of the ceiling, leading the audience to imagine that it stretches far up into the sky. I think that both her works leaves the audience to imagine for themselves what are the stories involved and to create their own. Or it could be a message to support production of art and media instead of endless consumption.

A video installation and a black and white photo of a US soldier.

The first thing to grab your attention is The Ocean View Resort. It focuses on the sea during a cloudy day  for the longest time with classical music playing in the background. It made me feel like I was waiting for someone to come home, as if staring at the sea long enough would bring them back. The melancholy his work brings out by just a simple footage is brilliant.

As I looked at the photo of the soldier, I was hinted that the story was even more tragic. Maybe it was about waiting for someone that was never going to come back. I connected with it because I knew what it was like to be separated from a loved one for a long time. It also portrays hints of political and historical connotations.

After a while, the narration started. I’m not sure if the volume was meant to be soft so the audience only hears whispers to make it more intimate or the speakers were just not set up properly. I would have like to understood what the artist was saying to get more context.

After reading the description, I found out that this was a story about three locations, Okinawa, Tokyo and the United States. The artist was also inspired by his childhood friend Y and his sexuality. I didn’t really get that from the installation but maybe if I had paid more attention or gave a more astute second look I would have seen the significance of each sign shown in the art.

One thought on “Museum Visit”