Eiko and Koma have a unique way of dancing that combines stillness, shape, light and sound. Both were born during the post-war era of Japan and lived in simple times where technology was mostly absent.

However, when the nature around them was destroyed by industries, student protests became rampant so the two were influenced by the nationalistic fervour of the times, thus igniting their passion for social change that they channelled into their experimental dance. Their movements are usually minimal and slow, incorporating pieces of nature into their movements and allowing their bodies to appear to become one with nature. The minimal, ragged cloths of earthly tones also help them blend in with the earth. 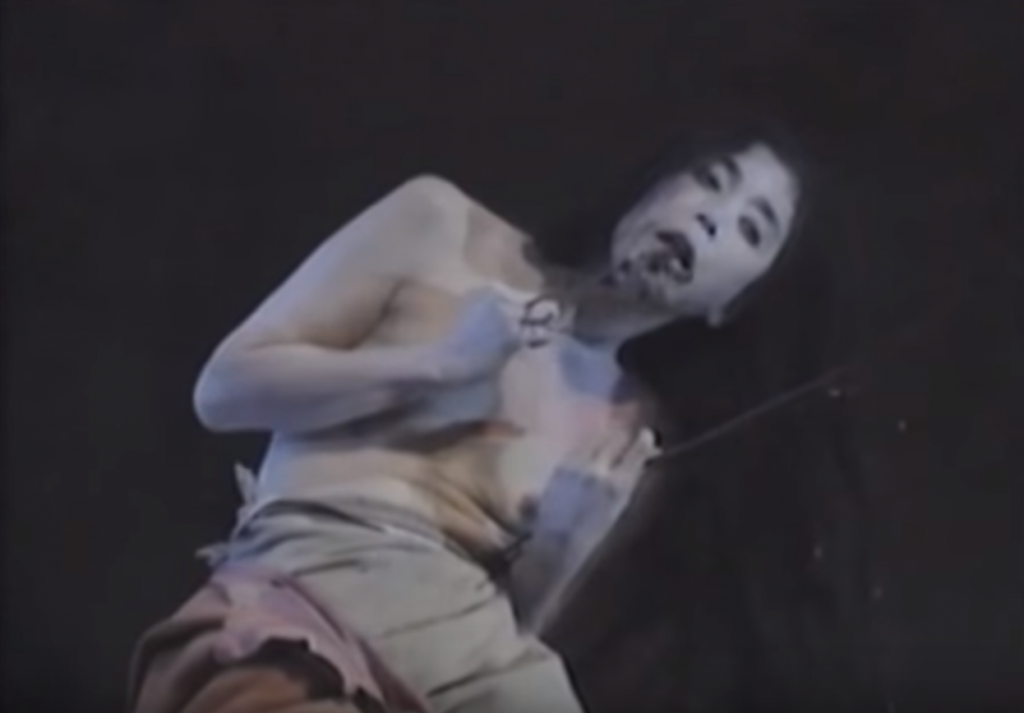 Eiko placing twigs on her chest while moving

I love trees, just touching them I know nothing is in their mind. – Koma

Perhaps, their desire to return to the simpler times during the post-war era manifests in their appreciation for nature which they see as a void of the materialism present in civilisation today and thus, a way to purify themselves as they become one with nature through their experimental dance. The strong presence of nature and return to simpler times is also emphasised by the sounds of traditional drums and flute. 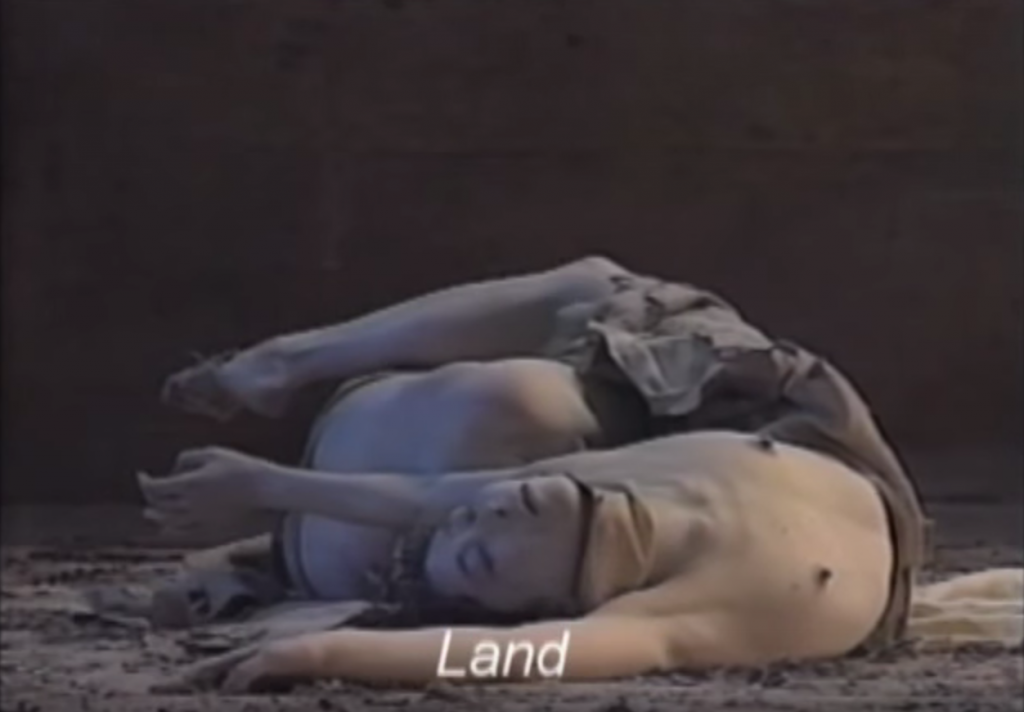 Appreciation for the natural elements

Similarly, against the setting of waves by the beach, Eiko and Koma’s dance moves appear to make them seem as if they are part of nature itself. One moment they appear to be blown away by the wind and the next, they appear to be flowing with the waves.

It can be clearly seen that in Motion Control there lies a strong synergy between the performer and the camera as seen by the different angles used to emphasise each particular movement. The camera angles also contribute to appearance of some other force such as a sudden change in physics. Indeed, as implied by the title, the dancer performs as if she is being controlled by some other force other than herself. 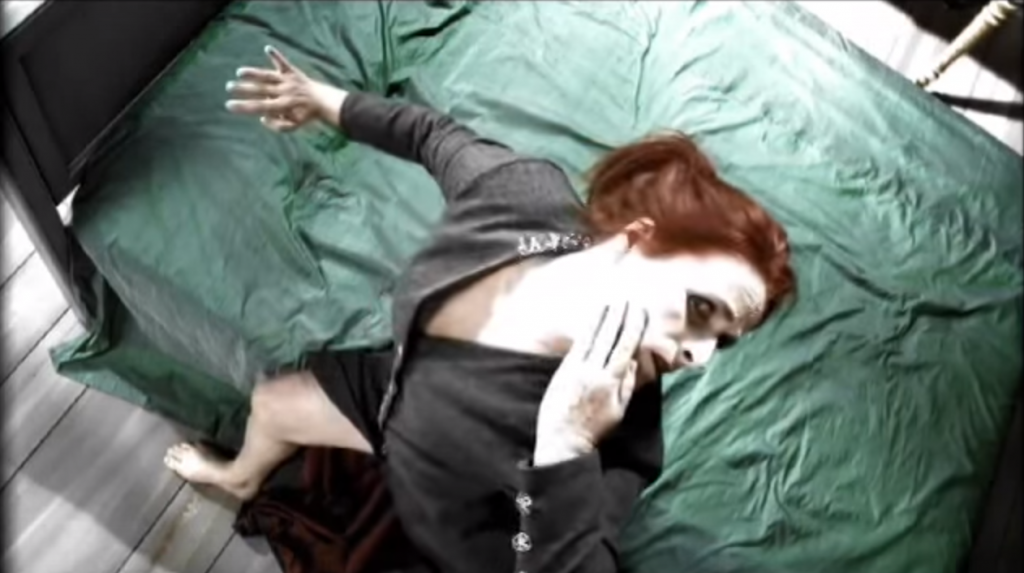 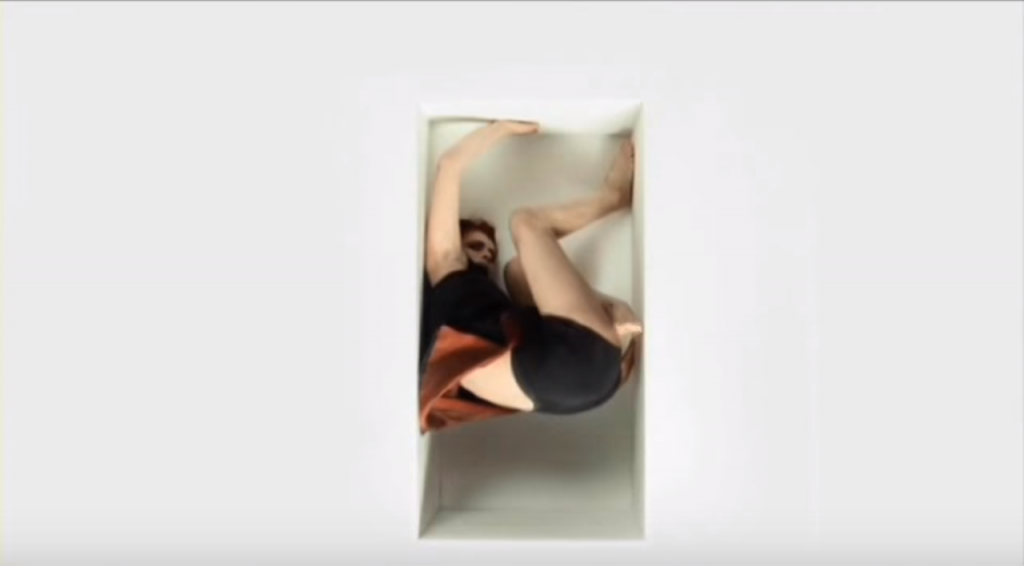 Sudden change in physics by rotating the camera angle

It then occurred to me that the use of a motion camera is vital to the dance as the whole performance would not be as provoking and fluid without having the camera follow the dancer in a specific motion. Upon further research, I discovered that it belonged to a particular genre of dance known as Screendance (or Videodance).

The make-up, clothes and background also contribute to the different mood in each segment of the video. The first one features theatrical make-up against a victorian setting, making the dancer appear to be a marionette. The second one has the dancer dressed much more simply and it is the use of wide space that makes the dancer appear small and surrender control to the physics of the space. This particular segment is also the one where she noticeably appears to respond to something physical, being the box. She wears a striking red dress in the last one that makes her seem connected to the ground as she limits her movement to her upper body.

The use of sound is notable as well as it features electro-orchestra music that is hard hitting and seemingly jarring at first but then forms a particularly unique style when accompanied by the dance movements. I found it especially interesting in the first segment when contrasted against the traditional victorian background.