My hyper-essay is going to talk about Marc Quinn’s Planet and Kumi Yamashita’s Origami Shadow Art. Both of them are interesting and mind-blowing sculptures but made of different materials and techniques. Also, their concepts and process making are not the same in many aspects either. 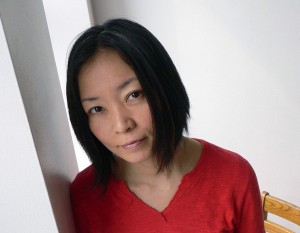 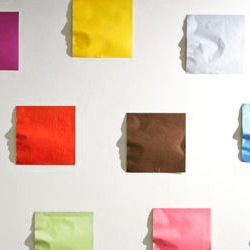 In 2011, shadow artist Kumi Yamashita, was commissioned by American Express to create a unique work of art for their Tribeca, New York office lobby. The work was entitled “Origami” which consists of 22 sheets of 9″x9″ colorful origami paper that, when creased by hand and lit from the side by a single light fixture, will reveal in shadow the facial profiles of employees. 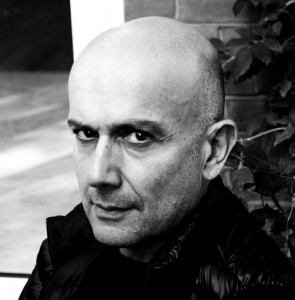 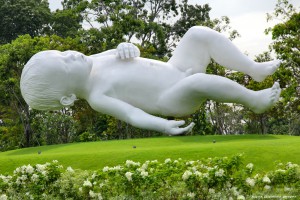 The unveiling of Marc Quinn 2008 sculpture “Planet” — a seven-ton, 10-meter-long bronze sculpture of his infant son — at the Gardens by the Bay in Singapore. Donated by Mr. and Mrs. Putra Masagung, the sculpture, one of an edition of three, will be a permanent display in the meadow area of the new public garden. This piece is about the environment, nature, and our relationship to it. 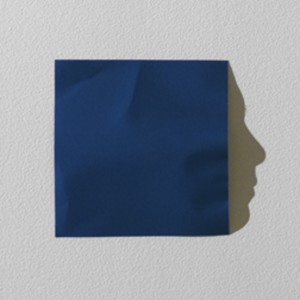 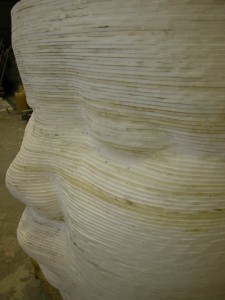 Both two sculptures have relation in human and also revealing shapes and lines of some parts of human body.

However, for materials, they used totally different ways and forms to create the works. One is as simple as Origami papers and shadow; the other is seven-ton super huge and heavy bronze, but they are both inspiring and amazing. Well, as Kumi Yamashita mentioned, “Origami” symbolizes the essence we all share. It is a simple square piece of paper and with it one can come up with an infinite number of shapes. We may all look different, live different and sometimes it feels impossible to relate to one another. However, once unfolded, we share a common shape, a common source. Shadows came to symbolize another dimension of life, perhaps something even more real than its holder. At the same time, to Marc Quinn, floating bronze plays on weight and the illusion of weightlessness. It is about a paradox, an inversion of our relationship to our planet. It makes you realize that something big, like our planet, is vulnerable as well, and kind of precious.

Even though Origami sculpture seems easy to produce, but it comprised of both the material (the solid objects) and the immaterial (the light or shadow) and so it still need enough preparation and planning to achieve it well. While, “Planet” is even more than this.

When beginning the work, Kumi Yamashita took a lot of time working on sketches to get the composition and scale, this is especially true for her light & shadow sculptures that are site­ specific. It is very important that the artwork inhabits the space in a balanced and harmonious way. So to get human gestures and contour to look recognizable and natural in shadow, she started by photographing and then used those photos as reference for sketches. Once she had the composition worked out, the next step is choosing the right light. While in choosing the lights, Kumi Yamashita encountered several problems and risk as different bulbs have different qualities, some lights will cause double shadows to appear, which of course ruins the effect, while others may produce very crisp shadows or blurry ones. But she did keep working and soon overcome it; hence she ended up doing a lot of testing to find the correct fixture for each sculpture and application. Once she had figured out the shadow’s shape and the light to be used, then begin folding the actual sculpture.

The process of making the huge sculpture was a long way. Marc Quinn was working in his big, white studio in Hoxton, east London. It’s modern, functional – not like a lab, not quite, but rather clinical. His assistant beavers away quietly in the background, making phone calls, tapping on the computer. The concrete floor is heated. The music is just about hearing level. He has some computer mock-ups of what the sculpture was going to look like. Polystyrene was used to model the sculpture. Then bronze will be poured in it, the piece was molded and cast in bronze. Once the bronze shape finalize, white paint covered on it. There are more details in the video, and Marc Quinn involved every stage of the process.

Though it’s difficult to find so much information in budget and planning of these projects. However, I can see they really had clear goals in mind and organized well in process while getting everything moving step by step.