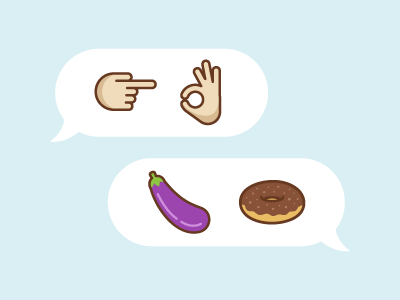 Sex is nothing new to us, it is a topic that everyone knows of and understand how it works. In order to spice up their sex life, people are always finding new ways to pleasure themselves and their partners. Due to technology advances in the recent years, a new form of sex has emerged – sexting. Sexting involves the use of sending sexually explicit messages or images through text messaging. People are now also using emojis to sext, providing a somewhat visual to the sexual acts that they want to perform on their partners.

A safe word is almost always agreed upon before having consensual sadomasochism sex. This safe word is a signal for the dominant partner to stop, slow or alter his actions. This safe word should be easily recognizable and stands out from the context as incongruous and unambiguous. For example, the word “no” is not a good safe word as it’s use is vital in sadomasochistic sex. It offers the dominant partner the sensation of imposing their desires on the other while the submissive derives pressure from being overpowered. In contrast, some popular and effective safe words are colours such as red, food like bananas and oranges, or even celebrities such as Justin Bieber and Donald Trump.

Julie and Mike are two sexual partners who are into sadomasochistic sexting. They use emojis to express their desires and derive pleasure from using the emojis in different sequences.

Through these emojis, several could be used as a safe word. For example, ? and ? seem to be the two emojis that are most out of context. The rest of the emojis can be used to express a certain reaction to a sexual action, or symbolise the sexual action itself. For instance, facial expression emojis like ??? depicts the pleasure that one receives. ?? can also mean that the submissive partner being silent, gagged, or in tears (which might not be a bad thing because of the sadomasochistic sex).

Additionally, just like the word no, ✋ is not a good safe word. Even though it can mean stop in other contexts, this will likely not work in sadomasochism sex. It might be perceived as submission or a raise of hands for more sex (or sexting).

Therefore,? and ? are the most likely a safe word in the sadomasochistic sexting that Julie and Mike involves in as it has no sexual connotation. It does not depict any sexual acts, and are the most arbitrary emojis in the stack. However, it must be mentioned that this is based on the assumption that this has been conveyed beforehand, and these do not personally connotate anything for them.

Remember Donald Trump’s ‘this-was-locker-room-banter’ excuse after that video of his conversation with a group of men on a bus in 2005 was released last October during the presidential campaign? I’m sure you do… Now, read the top three entries for ‘locker room talk‘ in the UrbanDictionary. Do you agree with it? Does it fully capture what ‘locker room banter’ is and what social/interpersonal functions it serves?

I agree to the UrbanDictionary to a certain extent – locker room talk typically involves the topic of sex. However, I also feel that instead of looking at the entries individually, a holistic view can be utilized instead. Mixing the three entries together would provide a better picture of locker room banter, and the social/interpersonal functions it serves.

The top two entries on UrbanDictionary seem to hint at homosocial talk and bonding. By talking about their sexual encounters, similarly gendered people are using the topic of sex – something that they can all agree upon – to bond with each other. The real focus of the conversation is their relationship instead of the sexual act itself. They can also relate with each other in an informal and nonhierachical way (Cameron & Kulick, 2003). This is especially so for the second entry, which states that locker room talk is between people who are like-minded. This sharing of secrets and stories on their sex lies would underline their in-group status, bring them closer together and affirm their shared moral code. In contrast, if someone of the out-group participates in the conversation, he is highly likely to not understand or approve of what is said.

The second and third entry of UrbanDictionary also hints upon fuck stories, which are generally not approved for discussion in public. These fuck stories affirm dominance and control – something that Trump tries to portray. By saying that he would grab women by the pussy, he is portraying himself as the alpha male and is also objectifying women in the process. This is actually something prominent in locker room banter. By degrading and putting a woman down, the gender imbalance is highlighted, and gives the man a sense of domination. The man starts to feel more masculine and powerful through these stories, which strengthens his construction of his heterosexual identity.

This heterosexual identity is constructed through locker room banter. Even though homosocial relations are highly valued and regarded, it undeniably gives rise to the spectre of homosexuality. Guys who are too “bro” or too close with each other may be deemed as feminine or gay, and might thus find ways to deconstruct this assumption. Therefore, through locker room banter, they use their sexual attraction to the other gender as an affirmation to their commitment to shared norms for gender and sexuality, and as an denial to homosexuality.