[FORM AND VISUALISATION] Project 2 – The Improbability of Vision

I wanted to make an anamorphic illusion whereby from one angle, you see a distorted pattern on an object but from another angle, you see properly aligned checkered patterns!! I thought it’d would be cool to actually make something like that as I often see these kinds of projects outside. I wanted to use grey and white checkered patterns as the design as that pattern means “transparent” in photoshop language. I figured it’d be a cool trick if someone in ADM were to see a “missing piece” of object from a real, normal world. That is because everyone in ADM is familiar with the grey and white checkered pattern symbolizing “transparency”

PROCESS:
I tested out with a box and a black marker first. I borrowed a projector from a friend as I think it’ll be useful to project the pattern I want onto the object, then trace it to obtain maximum accuracy. This was a very very very rough test that I tried. After the test, I found out that there were many requirements needed to make it successful.

2. Projector must be at eye level

3. Projector must be stationary!

4. Object must be stationary! 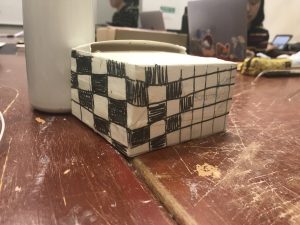 Afterwards, Peter told me that checkered patterns were too boring so we changed it to a dazzle pattern instead, with the aim of trying to make the object invisible! A dazzle camouflage was used in olden times of war for ships to fool enemies on their distance, size and quantity. I decided to use a toy car as my object as I wanted a vehicle and cars have many curves, contours and parts like wheels and mirrors, which would make this project a challenge.

SET UP:
I put the projector at the same level as my object, which I spray painted white and added a backdrop. 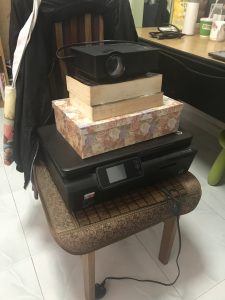 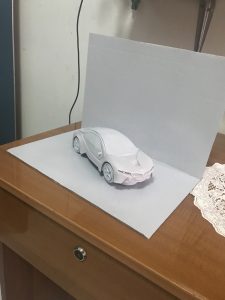 After using the projector for a while, I realised that it was extremely difficult to work with such a small object as there were shadows cast from the car to the backdrop as well as shadows cast from me onto the whole set up. My shadows would hide the projection, making it pointless as I couldn’t see where I was marking. In the end, I stopped using the projector and relied on a single “looking-point” to paint instead. 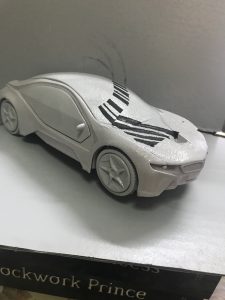 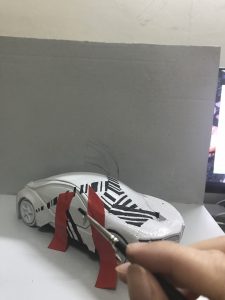 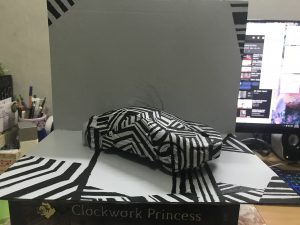 OUTCOME:
When viewed from correct angle: 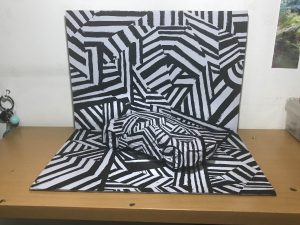 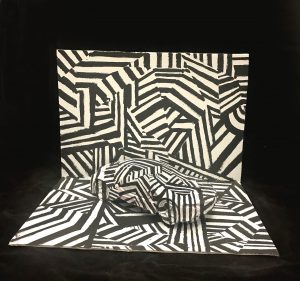 When viewed from “wrong” angle: 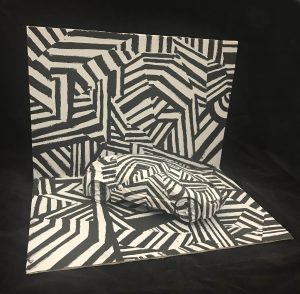 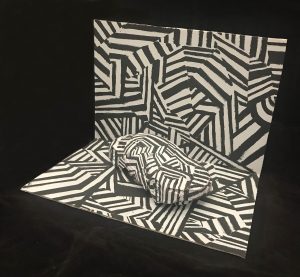 I think this project would have worked a lot better if I had a bigger object instead. The illusion would be more convincing, and I would have been able to fully utilize the projector too. It might also have been better to use a marker instead of paint as the paint is messy and it cracks after a while. Overall, I spent a lot of time and trouble figuring out how to create the camouflage when I couldn’t use the projector according to my original plan. The effect also shows up better on camera as many perceptive cues are flattened in 2D form.