In the second lecture, we looked at Art Noveau. Alphonse Mucha is one of my favourite artists and I was excited to learn about his works in class. Alfons Maria Mucha known internationally as Alphonse Mucha, was a Czech painter, illustrator and graphic artist, living in Paris during the Art Nouveau period, best known for his distinctly stylized and decorative theatrical posters, particularly that of Sarah Bernhardt. He produced illustrations, advertisements, decorative panels, and designs, which became among the best-known images of the period. 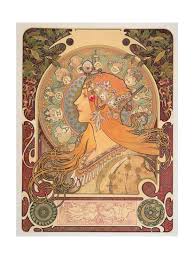 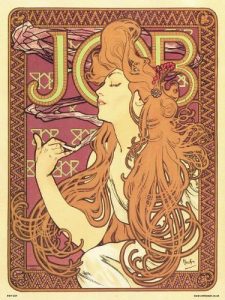 His use of swirls and curves became a very distinct look for the Art Nouveau period.

The success of the Bernhardt posters brought Mucha commissions for advertising posters. He designed posters for JOB cigarette papers, Ruinart Champagne, Lefèvre-Utile biscuits, Nestlé baby food, Idéal Chocolate, the Beers of the Meuse, Moët-Chandon champagne, Trappestine brandy, and Waverly and Perfect bicycles.With Champenois, he also created a new kind of product, a decorative panel, a poster without text, purely for decoration. They were published in large print runs for a modest price. The first series was The Seasons, published in 1896, depicting four different women in extremely decorative floral settings representing the seasons of the year.

I think it is wonderful that he was given a chance by Sarah Bernhardt. We would never have gotten to see such beautiful art if not for this lucky discovery.