I woke up in a world where magic and sorcery is widely practiced, though there are dangers to the spells cast. Everything is out of the ordinary and even the forms of living beings have been altered due to the use of such powers.

My characters, name and attributes

Using the idea of “Be careful what you wish for”, I created these 3 characters, each representing a different  theme: Brains, Brawn and Beauty. They are all magic practitioners who have cast spells upon themselves, revealing their greatest desires. However, due to the complexity and risk of casting such great spells, they have transformed their bodies into something undeniably abnormal. This curse was the cost and consequence of granting their own wish through the unethical use of their powers. 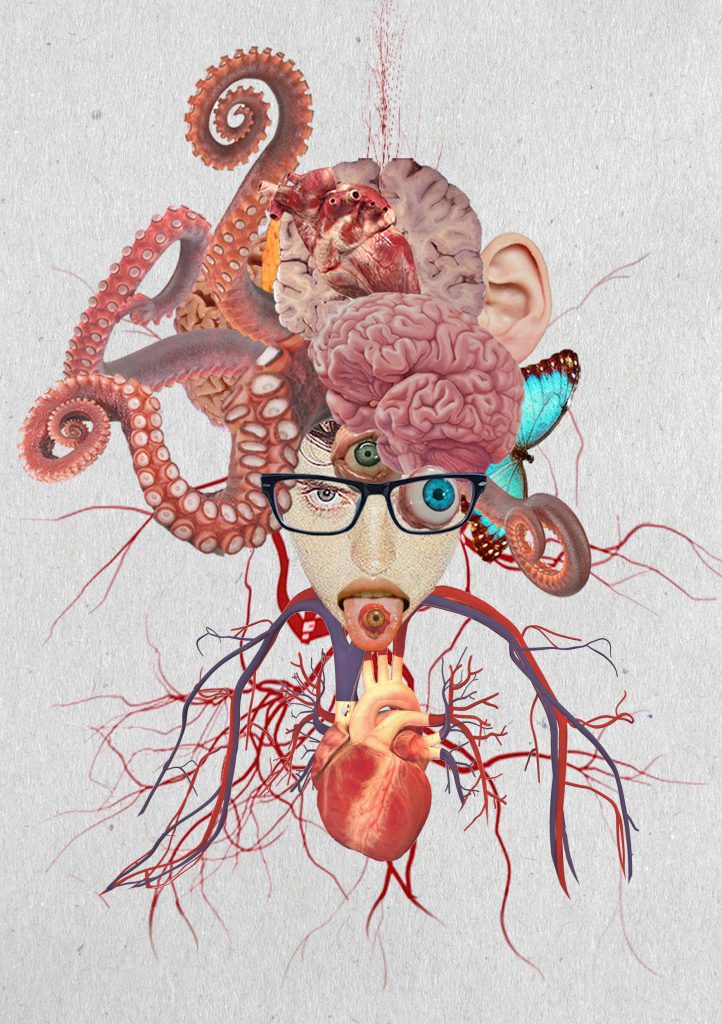 Albert was originally intelligent, but he wanted more. He was obsessed with the idea of being an all-knowing being and all the wisdom and knowledge in the world, therefore performing the spell on himself. It went wrong and now, he’s stuck with this form. There are multiple brains on his head to represent the knowledge he acquired. Parts of his face like his eyes and nose have been shifted out of proportion due to the addition of extra brains. The addition of eyes was to symbolize the idea of “seeing the truth”. The octopus represents cleverness, and complexity. The butterfly represents intellect. Another consequence of the spell is that now, he has no body, as the twisted unconscious judgement of the spell deemed that he no longer needs a body if all he required was knowledge. He navigates by floating around and using the veins and nerve endings to feel and touch things around him. 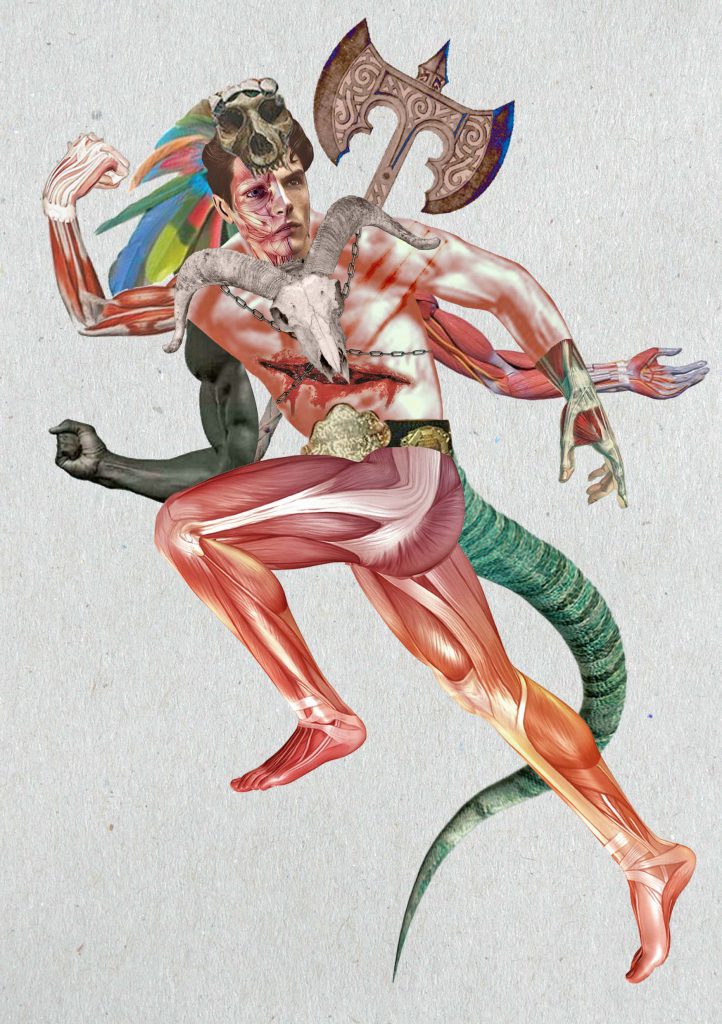 Ekon was a very active and sporty person. He hunts and fights often, and was fixated on the idea of obtaining his ideal perfect body. Fit, strong and capable . He was always curious as to how peak human performance looks like and soon, desired it for himself. Now, he has 2 extra arms for the sake of efficiency in battles. One of them has been hardened into something that’s tougher than iron for the sake of punching people’s lights out. Most of his muscles are now exposed to show the inner workings of his crazy anatomy and also to scare his opponents. He carries a weapon on his back (an axe) and the skulls of animals he killed around his head and chest. There are also scars on his body to represent the many tough battles he’s been in. There is an additional tail added to him which he can use while fighting enemies from behind. 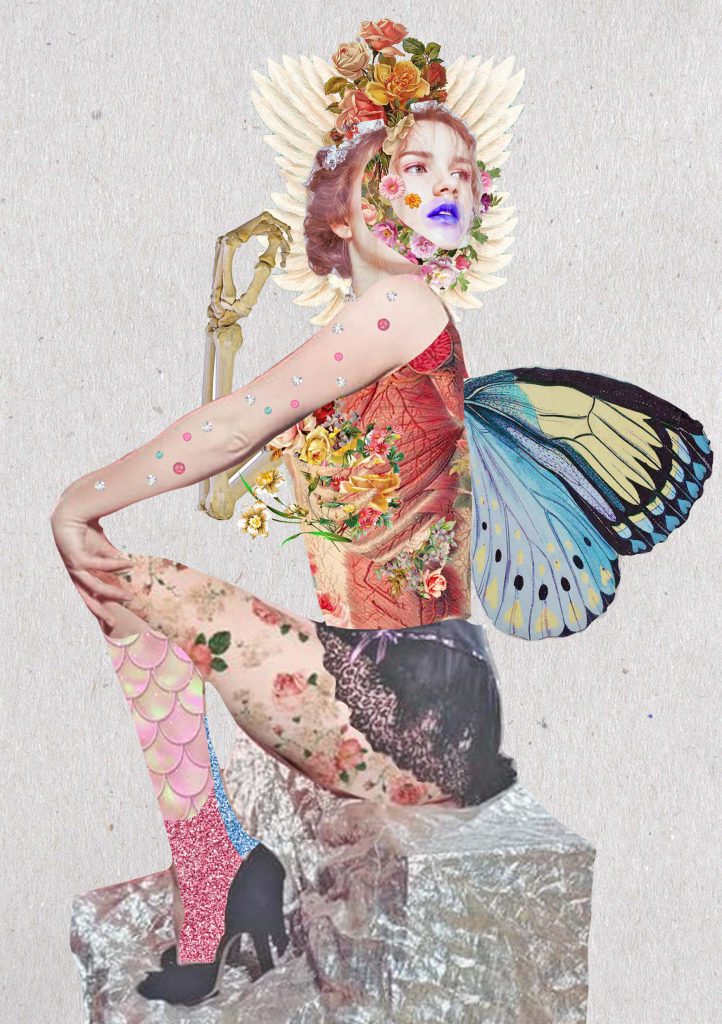 Unlike the previous two, Mabel never had any of the traits of her wish in the beginning. She was a conventionally unattractive girl, who deeply wished to be beautiful. She spent years practicing and researching on this spell so that she can finally be beautiful both on the inside and outside. But alas, it didn’t turn out the way she had hoped for. Mabel wished to encompass all there is to beauty. Nature is the first word that comes into my mind when I think about beauty, so I added a lot of flowers to her form. Her face has now been cut up to reveal flowers inside. Same goes for her torso. This is meant to represent “inner beauty”. There are angel wings on her head and butterfly wings on her back, which also symbolizes beauty and elegance. There are jewels embedded on one of her arms to exhibit glamour, and the other has been turned into a skeleton as a representation of society’s view of “skinny = pretty”. Her legs are mashed up with things that she finds beautiful such as flowers, mermaid scales and glitter.

What was the process taken?

I started by coming up with a world that I would think is strange but cool at the same time. I also looked up the internet for some collage inspirations. I had a lot of ideas at first and I didn’t know which to choose, so I chose one that would allow for the most experimentation with elements. However as I was working, more ideas came into my head and I decided to change and explore the theme again, making mind maps of words that could describe my characters so I would have an easier time looking for the correct and specific images. It was honestly very time consuming to scrap an idea halfway and redevelop it again, but I felt that it was worth it. I also wanted to work with something that I have a personal interest in, which is gore, human anatomy parts and organs. I’ve always liked the insides of the human body as it is clearly there but, hidden away under a layer of skin. I wanted my work to expose the inner workings of the human anatomy, to make it look a little disgusting yet aesthetically pleasing too. I planned to show “Too much of a good thing becomes a bad thing” through the story ( “Be careful what you wish for”) and design of these characters so I added many elements of what the characters feel is “good” and tried to make the end result look crazy and “bad”. I tried to pose the characters in a way that also represents their respective themes, to make the 3 images look more visually interesting.

What DO YOU ENJOY MOST ABOUT THE CREATIVE PROCESS AND YOUR WORK?

I really enjoyed cutting up pictures and trying to find interesting ways to composite them into my characters! I also liked playing with colours in my collage, trying to find a balance between all the elements. I don’t do collages because I usually illustrate more, so this was really new and refreshing for me as I always start with a sketch before I illustrate something, but for this project, I went in with just a bunch of images and experimented on their proportions and placements to conjure up something new and exciting. There are many happy accidents that happened along the way too and I probably would have never thought up of such characters without using this method of collage. I put in a lot of time and effort into this project as it’s fun to create my own original characters from a concept.

What DO YOU ENJOY LEAST ABOUT THE CREATIVE PROCESS AND YOUR WORK?

I’ve always had this problem, which is that I tend to hate my work the more I look at it. I had a lot of self doubt throughout the process. Even though it was fun making the characters, I often worry about it not being up to standard.

Were there any challenges along the way?

Definitely. It was really difficult finding suitable pictures to put into my collage and appropriate high resolution images are rare. Deciding on which idea to work with was tough too as I had quite a few.

The face I used for Albert was too grainy and contrasted too much with the other clearer elements in the image. I should have looked for a photo with higher definition. Also the heart on his head was quite unnecessary and I should have removed it. I also feel that I didn’t do a good job on Mabel’s legs. The flower patterns are too blurry and the other elements didn’t flow into one another well enough. It would look better if they were blended together instead. After the class critique session, I learnt that sometimes adding too many elements into an image will harm the image instead of help it. Although that was what I was going for as I enjoy looking at elaborate and detailed works of art, I will take note of this fact for my future projects.