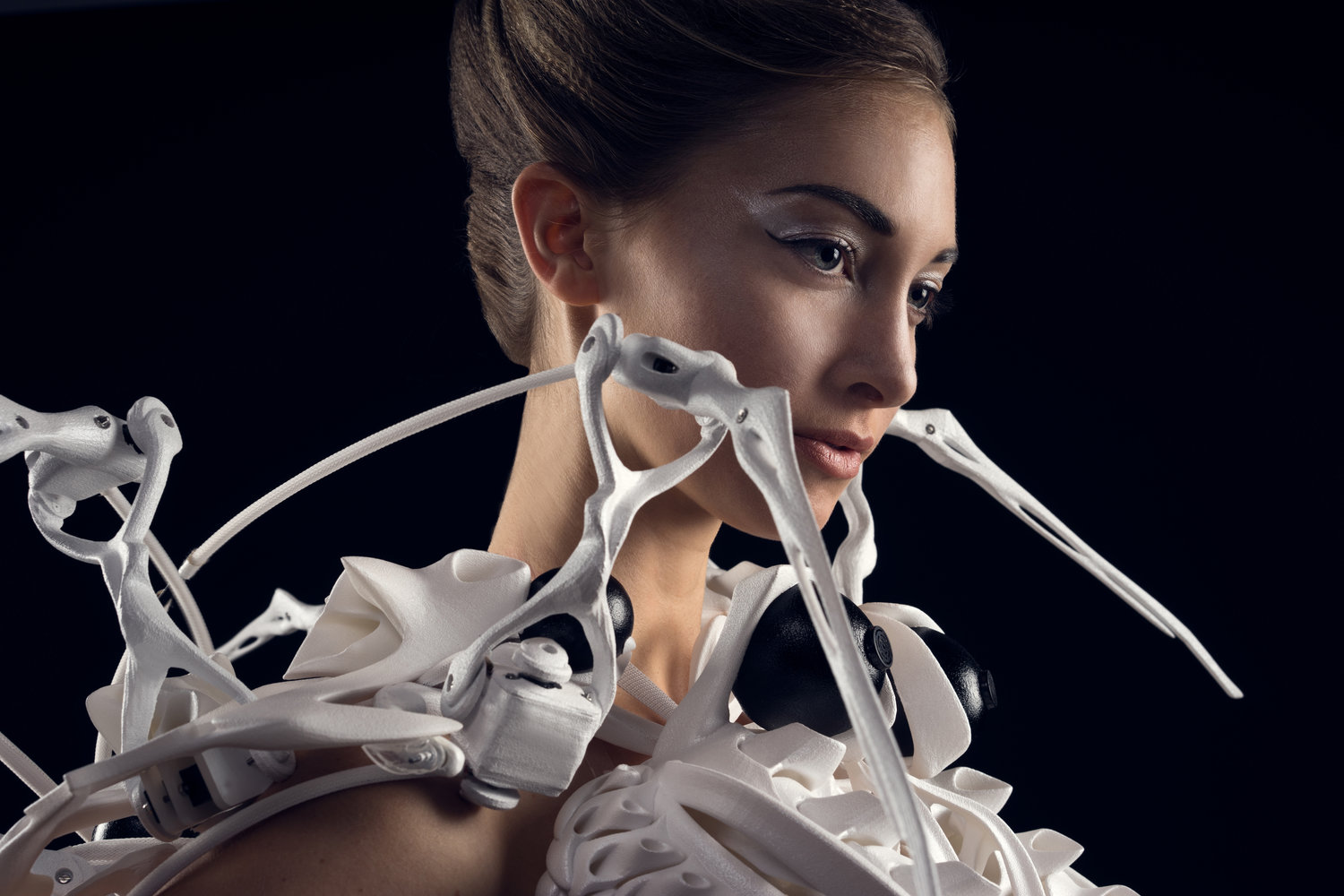 “Spider Dress acts as the interface between the body and the external world,” said Wipprecht. “It uses technology and the garment as a medium of interaction.”  – Anouk Wipprecht

Nowadays, fashion is a media to explore new functions, technology and also a new area for interdisciplinary academic research including engineering, material science, fashion design, interactive design and etc. The Spider Dress is one of Anouk Wipprecht’s 3D printed interactive garments powered by Intel in 2012. It contains proximity sensors and biometric signal that measure the wearer’s stress level to trigger the mechanic limbs on the shoulders that protect the wearer and attacks when others steps into the personal space. The system is able to understand 12 states of behavior, and Wipprecht calls it as “an interesting interplay between co-control and education of your own body and mind.” The Spider Dress is the innovation that is more futuristic than the smart wristband and glasses, and it pushes the boundaries of social norms. 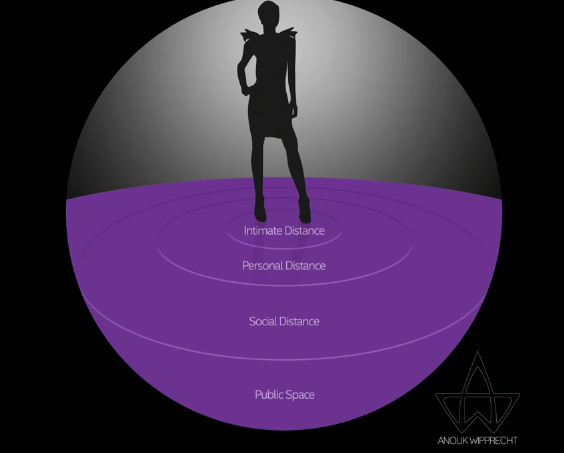 Anouk Wipprecht investigated in the interactions in different types of space such as the public space, social space, personal space, and the intimate space. Human being naturally prefers to keep certain distances between themselves and others. This creates invisible walls around us, and Edward T. Hall, the American anthropologist, and cross-cultural researcher called it the hidden dimension in his book.

“Fashion design, Interaction design, and technology. My thesis was about technology as an extension of the body.” – Anouk Wipprecht

Further, technology became the companion of us since the 1980s when personal computers were available to the mass. The interaction with personal computers developed from keyboard to touchscreen, voice control and even Brain-Computer Interfaces (BCI) that allow humans to mentally interact with computers. The function of computers is becoming part of our emotion and extension of the body. People had been communicating and expressing their attitude through fashion since ancient civilization. The expression becomes more dynamic with technology.

“I see the future being more sensorial and adaptive to individual needs. Personalized instead of globalized.”

I believe that wearable technology will go beyond the concept of personal dynamic that Alan Kay and Adele Goldberg Illustrated in 1977. It goes straight to reach our biosignals such as brainwave and heartbeats, instead of receiving the input from our fingertips. Wearable tech will be another breakthrough in human-computer interaction. 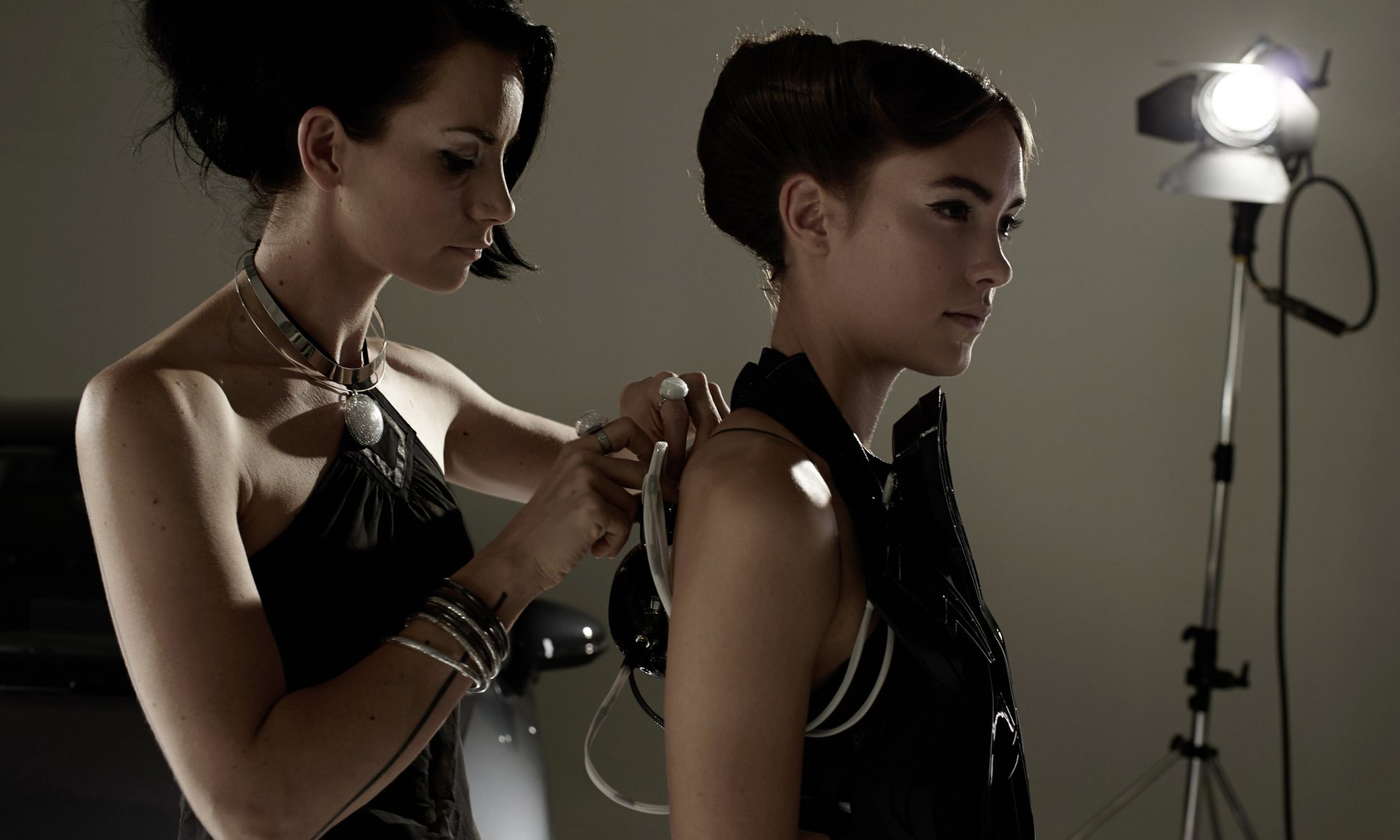 Around five decades ago, Roy Ascott mentioned that

“If the cybernetic spirit constitutes the predominant attitude of the modern era, the computer is the supreme tool that its technology has produced. Used in conjunction with synthetic materials it can be expected to open up paths of radical change and invention in art… The interaction of man and computer in some creative endeavor, involving the heightening of imaginative thought, is to be expected.”

in “Behaviourist Art and the Cybernetic Vision”. Nowadays, numerous artists and designers are applying this theory in their artworks. Anouk Wipprecht is one of the outstanding artists.

Anouk Wipprecht’s artworks demonstrate the combination of Fashion, Technology and Interaction Design. She is aiming to create the dialogue between the technology and body or the surroundings of the wearer with fashion as the new interface. The new interface that the next generation will grow up with. The garment itself is no longer a “perfect object”, as viewers’ participation is part of it and it is often unpredictable. Artists likeAnouk Wipprecht had transformed from an individualized source that creates objects to ones that create behaviors.