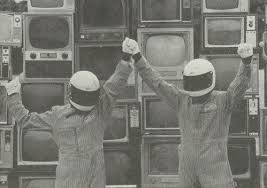 Ant Farm (1968-1078) was founded as an architecture, graphic arts, and environmental design company by Chip Lord and Doug Michels (1943-2003) in 1968. The group of adventurous artists and architects based in San Francisco identified themselves as part of the underground culture in the late sixties and seventies. That how the company name was made.

Ant Farm’s artworks were experimental and against the existing system. In the 1960s, the society was transforming into the era of collectivism, connectivism and DIY culture, where sexual liberation, mind-altering drugs, and utopian ideals were embraced. Also, they were not only focusing on single discipline, and crossed the conventional boundary of art with the rise of new media and technologies in the 1960s.

Our professor Randall Packer hosted an interview in the third space with the co-founder of Ant Farm, Chip Lord. Media Burn is one of the examples that he shared during the interview. It is an exciting performance documented in the videotape, that consist the two American icons. One is the customizes 1959 Cadillac El Dorado Biarritz, and another is the television. This public performance was widely spread on news, and there was live audience, camera crew involved which was ‘using TV to destroy TV’, said that by Doug Michels. On July 4, 1975, Schreier and Michels, drove the Cadillac through the set of televisions at its full speed, ended with the flaming televisions.

However, the performance did not end with the burning televisions. Doug Hall, an American artist, presented as President John F. Kennedy, had a speech, addressed the issues with mass media.

“‘What has gone wrong with America is not a random visitation of fate. It is the result of forces that have assumed control of the American system…These forces are: militarism, monopoly, and the mass media…Mass media monopolies control people by their control of information… And who can deny that we are nation addicted to television and the constant flow of media? And not a few of us are frustrated by this addiction. Now I ask you, my fellow Americans: Haven’t you ever wanted to put your foot through your television screen?’”

All in all, Media Burn was a piece that addressed the social issue using the most recognizable cultural icons: Cadillac and television. As the majority was addicted to television, and the mass media was having control over the audience. It seems to be the mobile phone and social media we have now. Media Burn, the “reality” that the artist create also brought up the question for us today: Haven’t you ever wanted to put your foot through your mobile phone?

One Reply to “Parodical or Commentary?”