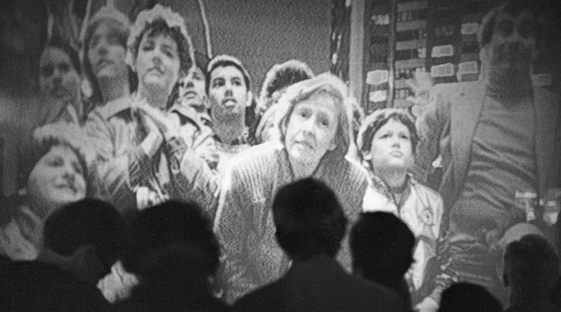 On a November evening in 1980, a remarkable performance art, Hole in Space was held on the two sides the United States. Kit Galloway and Sherrie Rabinowitz had their two life-sized screens installed at the Lincoln Center for the Performing Arts in New York City and the department store at the open-air Shopping Center in Los Angeles. The audience at Los Angeles and New York City could see and speak to each other through satellite technologies. The audience was extremely excited to interact with people across the state. As it was not easy to travel 2789 miles (est. from east to west in the United States around the 1980s. Even now, it will take estimated 5 hours to travel from Los Angeles to New York City by air. Also, video call was only common for consumers in the early 2000s.

On the first day of the performance, the audience was unsure about what was going on with no instruction or signs were provided. They started to interact with strangers on the screen to clarify their thoughts. Interestingly, from 04:50 in the video above. We can see the change in audience’s body language that they moved closer to the screen. They were trying to imitate the physical interaction, and chatting casually with each other, although they might be complete strangers. A middle age male audience even questioned the interviewer if the people he saw on the screen are actors.

On the second day, the audience went to the installation to participate in the performance through the word of mouth. A male audience wearing sunglasses declared that he heard it from his friend. I think this performance art had encouraged the interaction beyond the performance to the certain extent. On the last day, most people decided to come after mass media announcement to meet their friends, family and loved ones, just like how we Facetime our friends nowadays. The reaction of the audience likely reached the climax of the whole performance. They were laughing, screaming, and shouting at each other. You can see the audience jumping and kneeling on the floor to express their excitement near the end of the video attached.

In my opinion, this performance art is a success, as it encouraged audience engagement. Where the audience were fully involved in this piece. The setting of the performance is the key to encourage people to be interested in participating.

“The sculpture gives form to a social space that is at once displaced and intimate. People are enthusiastic to make contact with others in a much more uninhibited manner than could be found in the normal urban environs of New York or LA.”

Firstly, there is no description and instruction which created curiosity among the audience. Secondly, the performance was held in the public space with its life-sized scale screen to attract attention. Lastly, it was able to create emotions, such as happiness and excitement when the parents saw their daughter on the screen (from 10:25 in the video). The artist’s’ role here is to create the space for the audience to participate in the performance instead of letting the audience watching the artists chatting using satellite technologies. Last but not least, this performance was probably erasing the geographical boundaries, and pulling people closer, even strangers through the “third place”.

One Reply to “The Mother of Facetime”