Here are my final designs after the thought processes which I have mentioned in my previous post! Ciao! 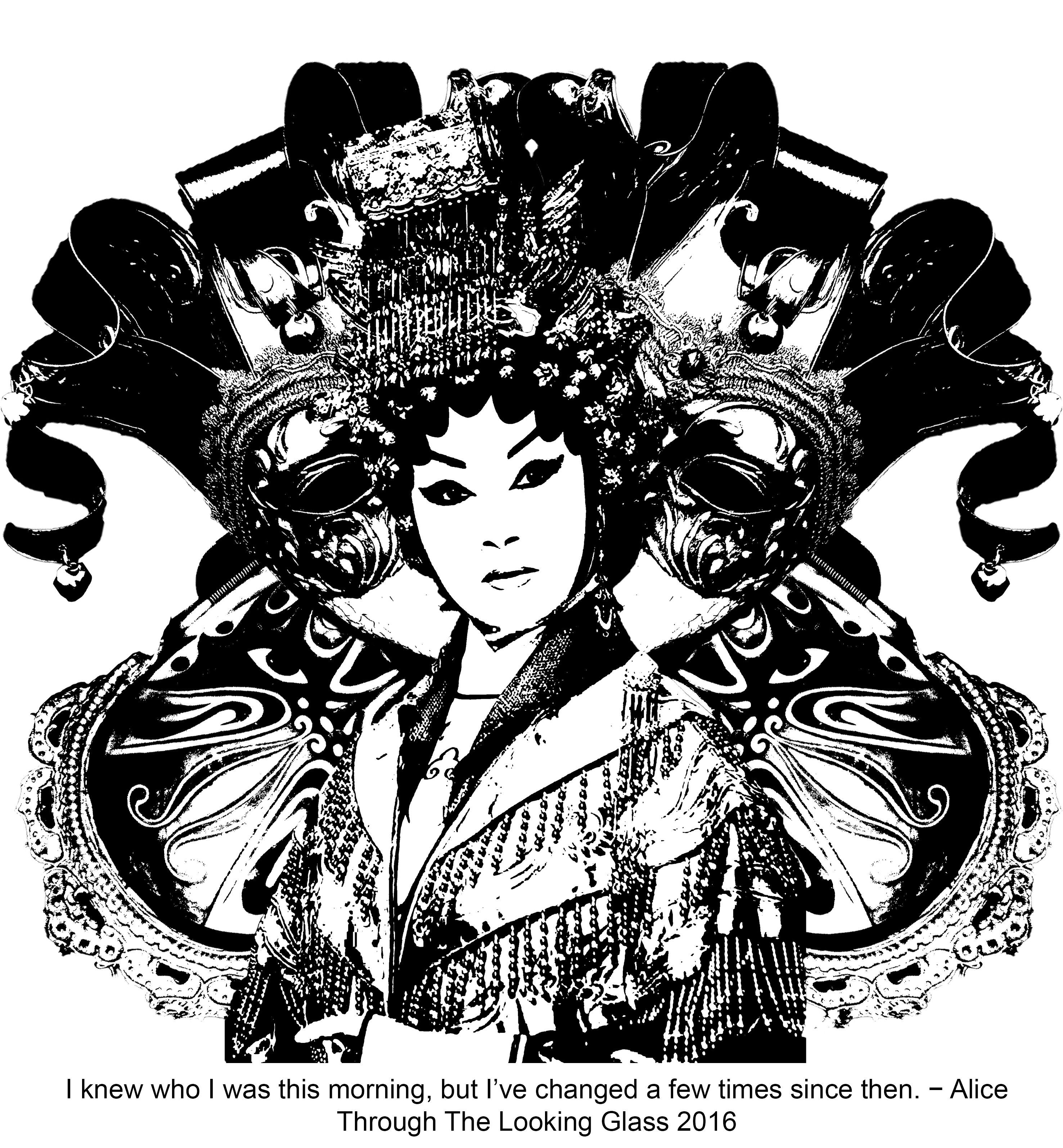 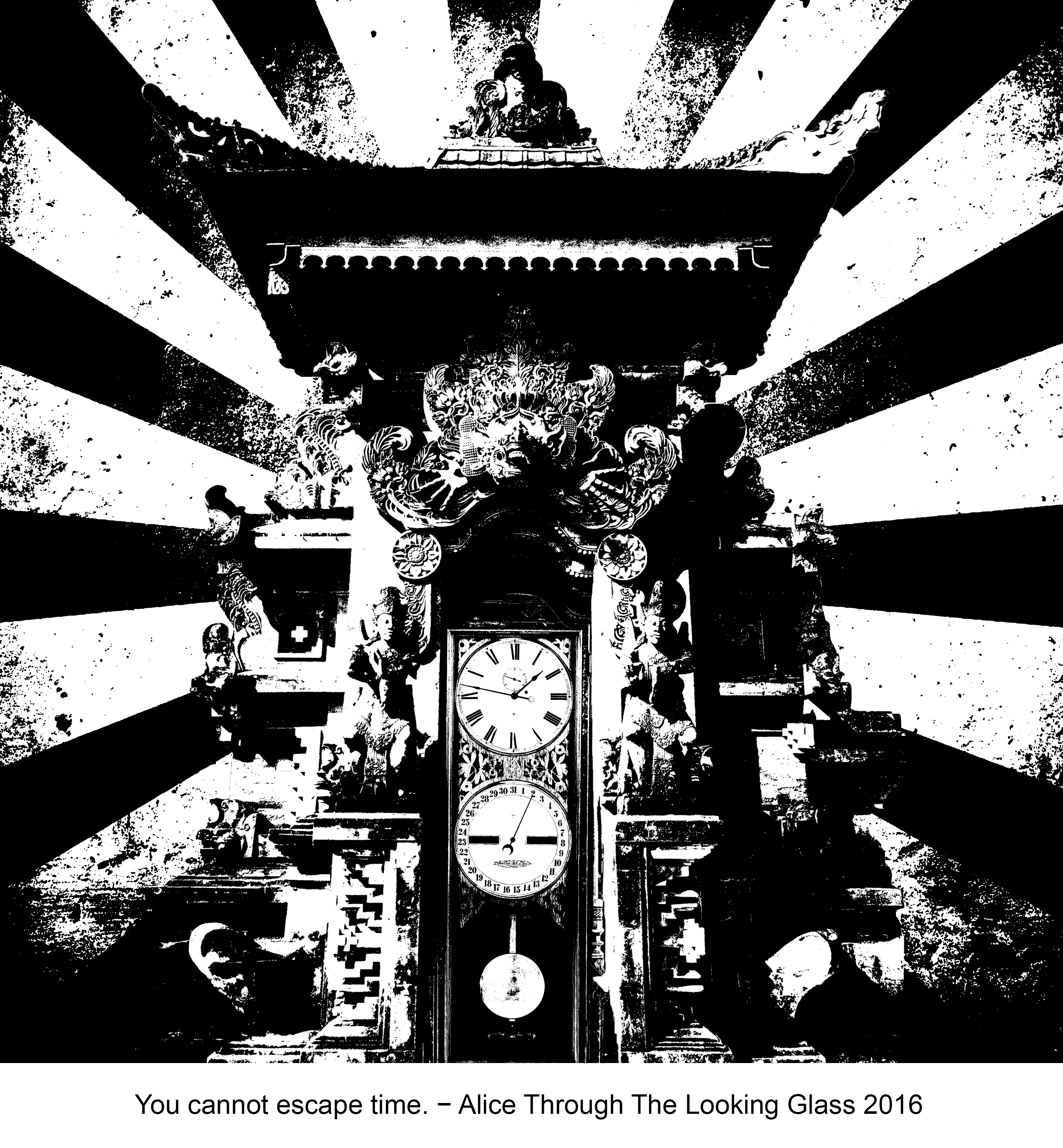 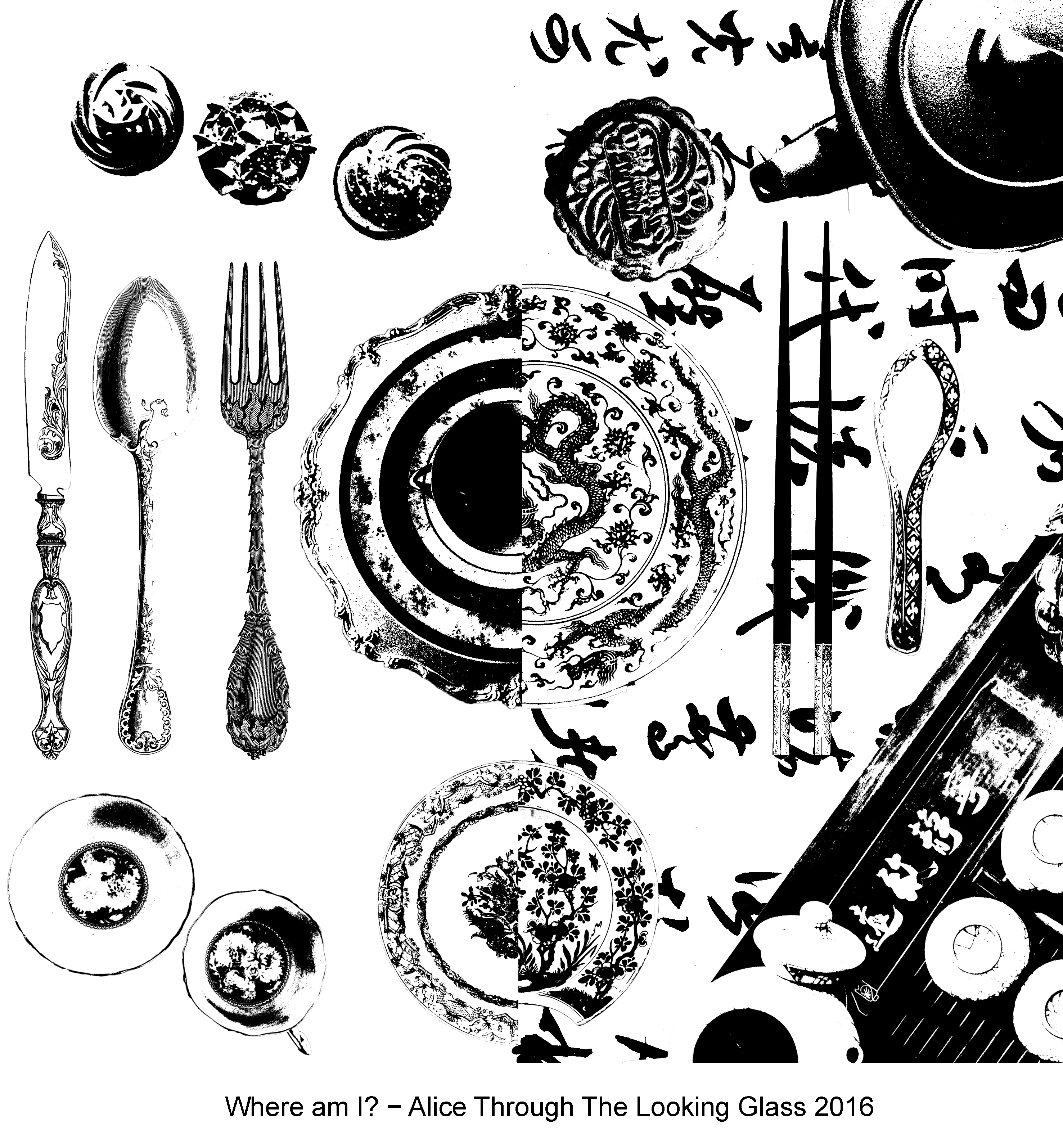 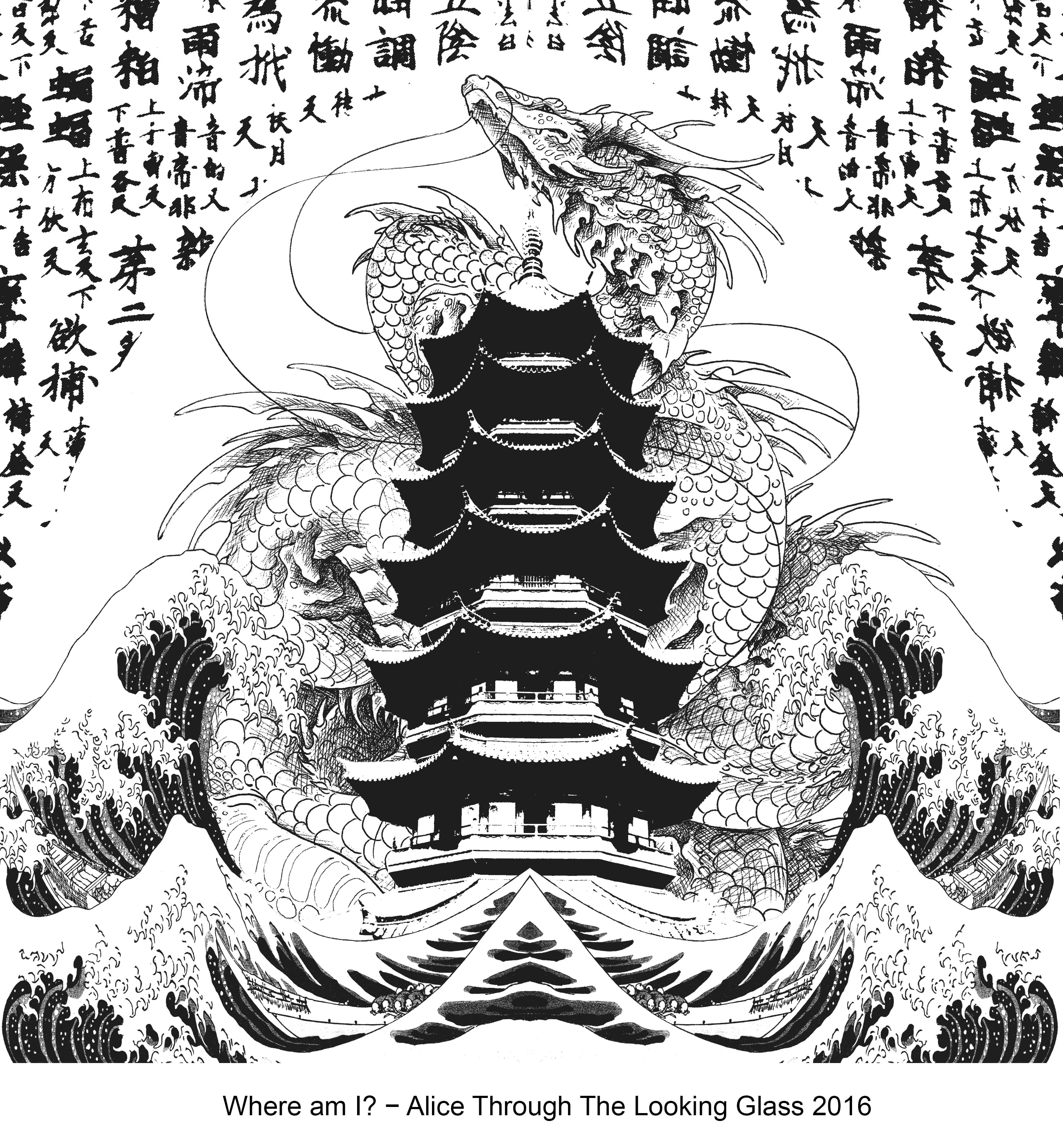 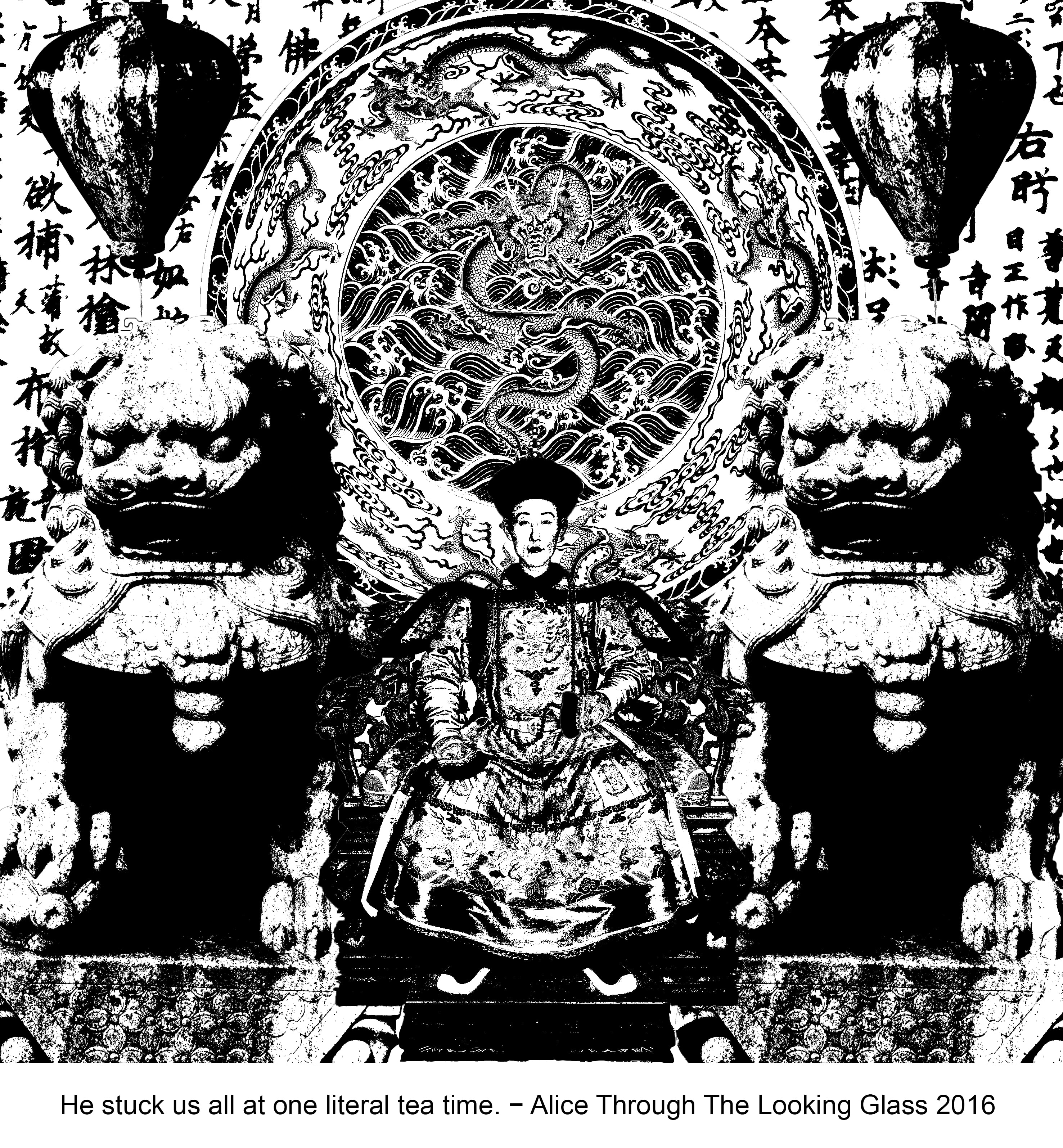 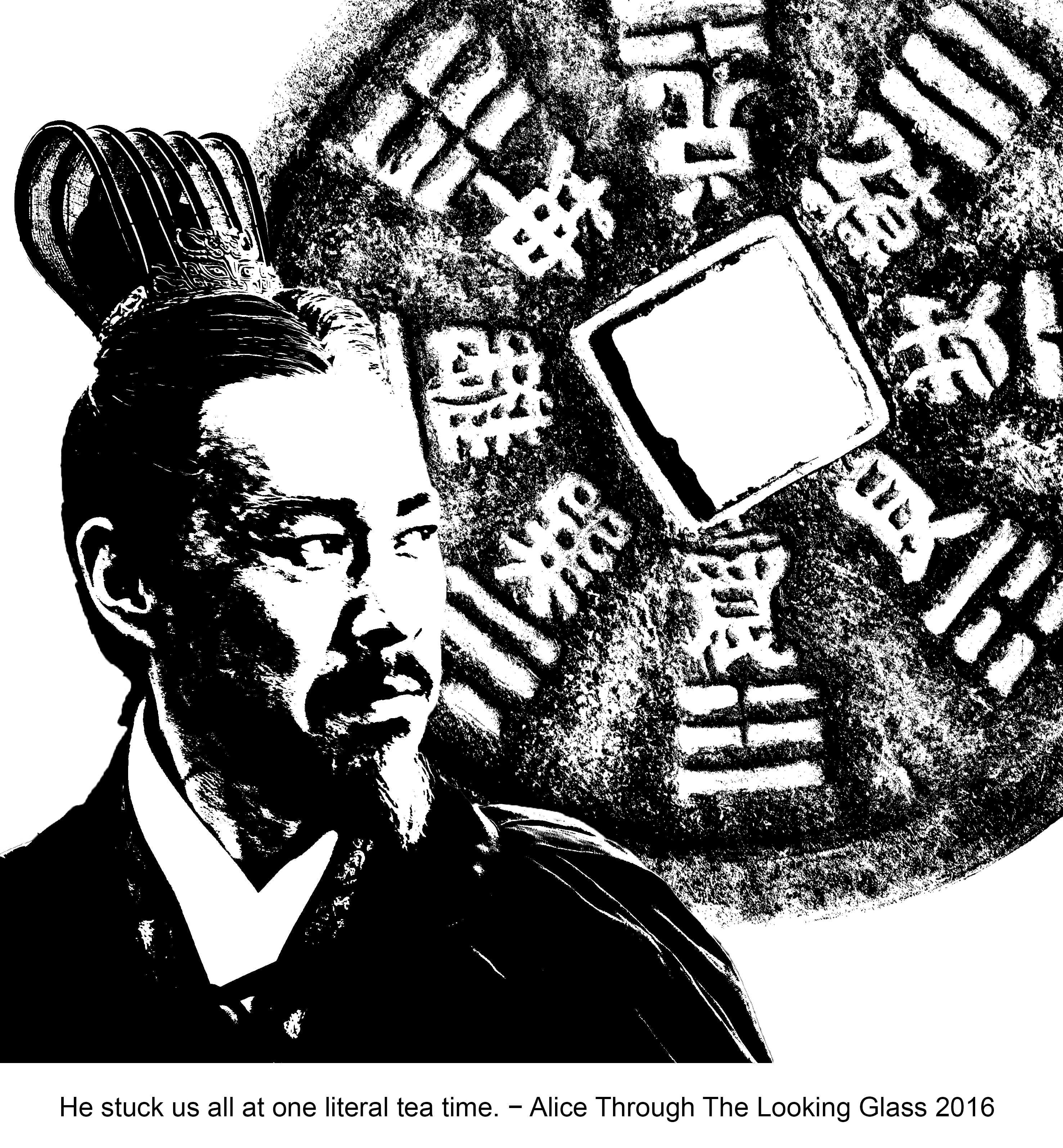 Hello all. For this project, I have taken some reference from the move, Alice Through The Looking Glass for my quotes. The four quotes are:

“I knew who I was this morning, but I’ve changed a few times since then.”, “Where am I?”, “You cannot escape time.” and “He stuck us all at one literal tea time.”

Since this movie is sort of a twisted version from the original story, I thought that it would be interesting to have a twist to my project as well. Instead to using the vintage and western concept, I have decided to use some Chinese references to my images. It all started when I gathered some inspiration from a professional chinese performance I saw in China once. There is a specific name to it and it is called “變臉”. Basically, it consists of a performer who usually wears a traditional chinese costume and with a swift action of his hand, he is able to change his mask on his face.

To give a clearer picture, here is a video of how it is like.

I thought that the idea of changing his masks is like changing different sides to him, which I thought was pretty relevant to my quote, “I knew who I was this morning, but I’ve changed a few times since then.” Hence, this kick started the Chinese concept to my project.

I’ve chosen the design aligned to the quote mentioned above for the totebag. It was really interesting as to how we coated our silk screens and imprint our designs on it such that we can print it on bags or on paper. 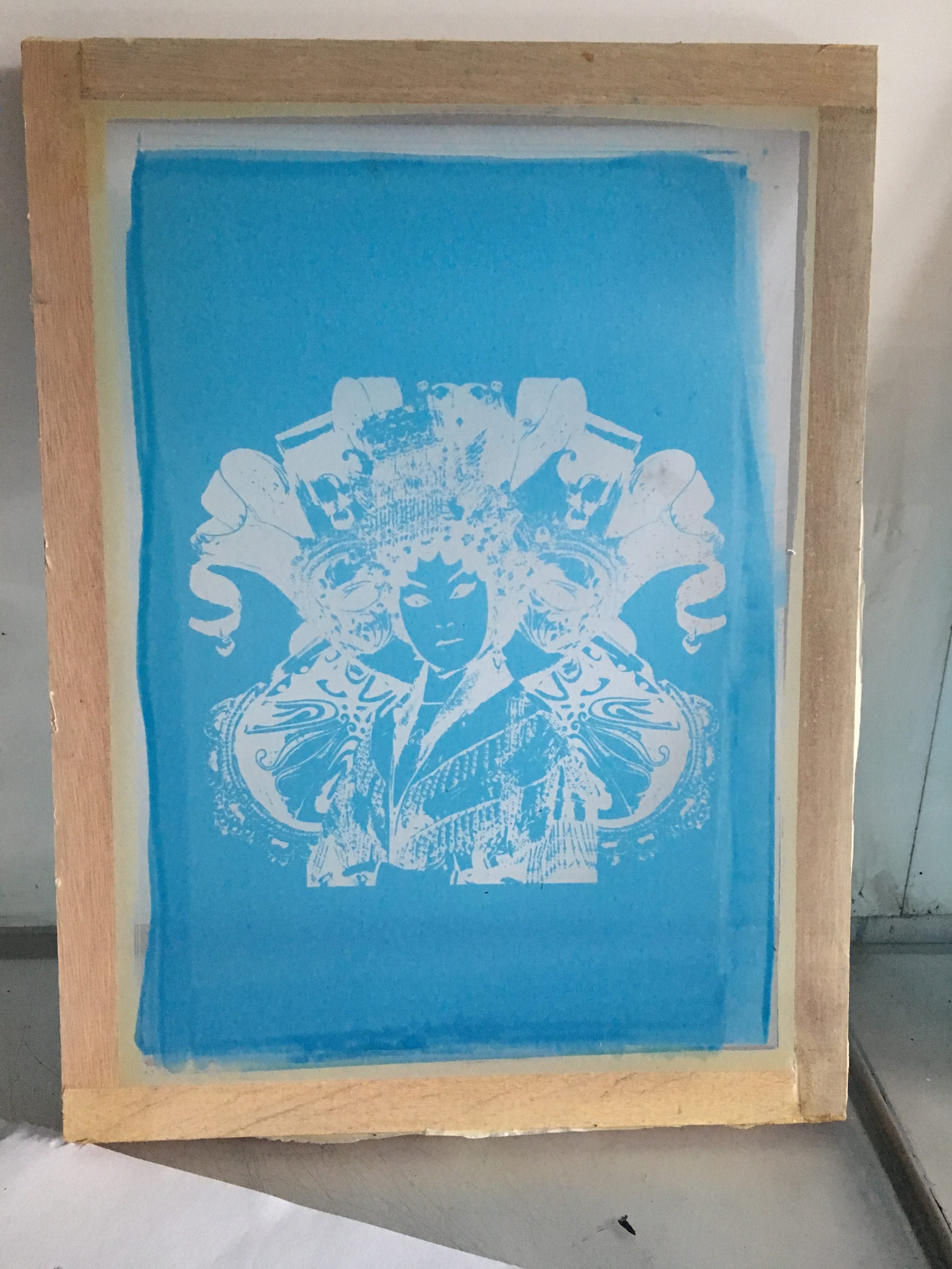 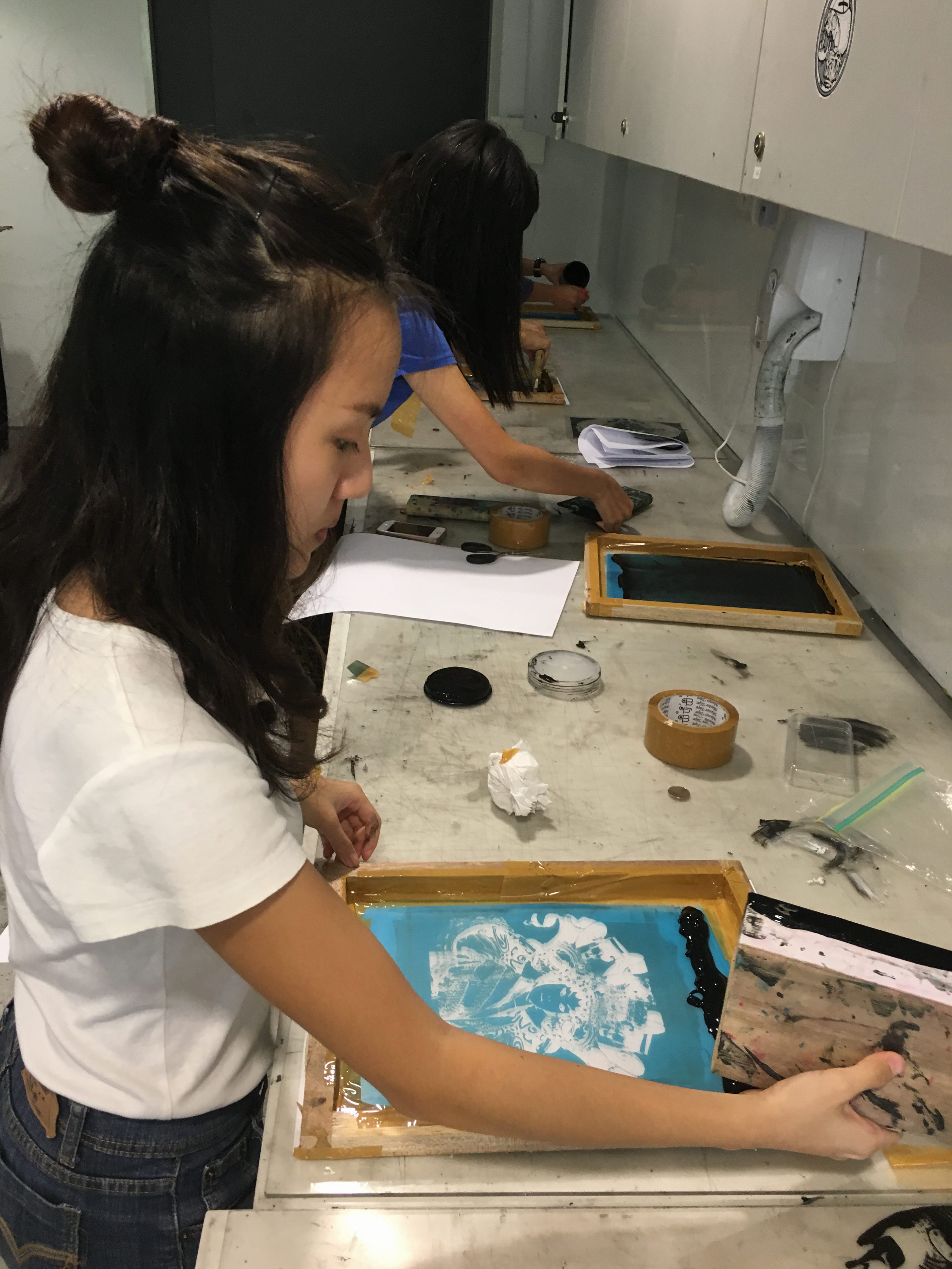 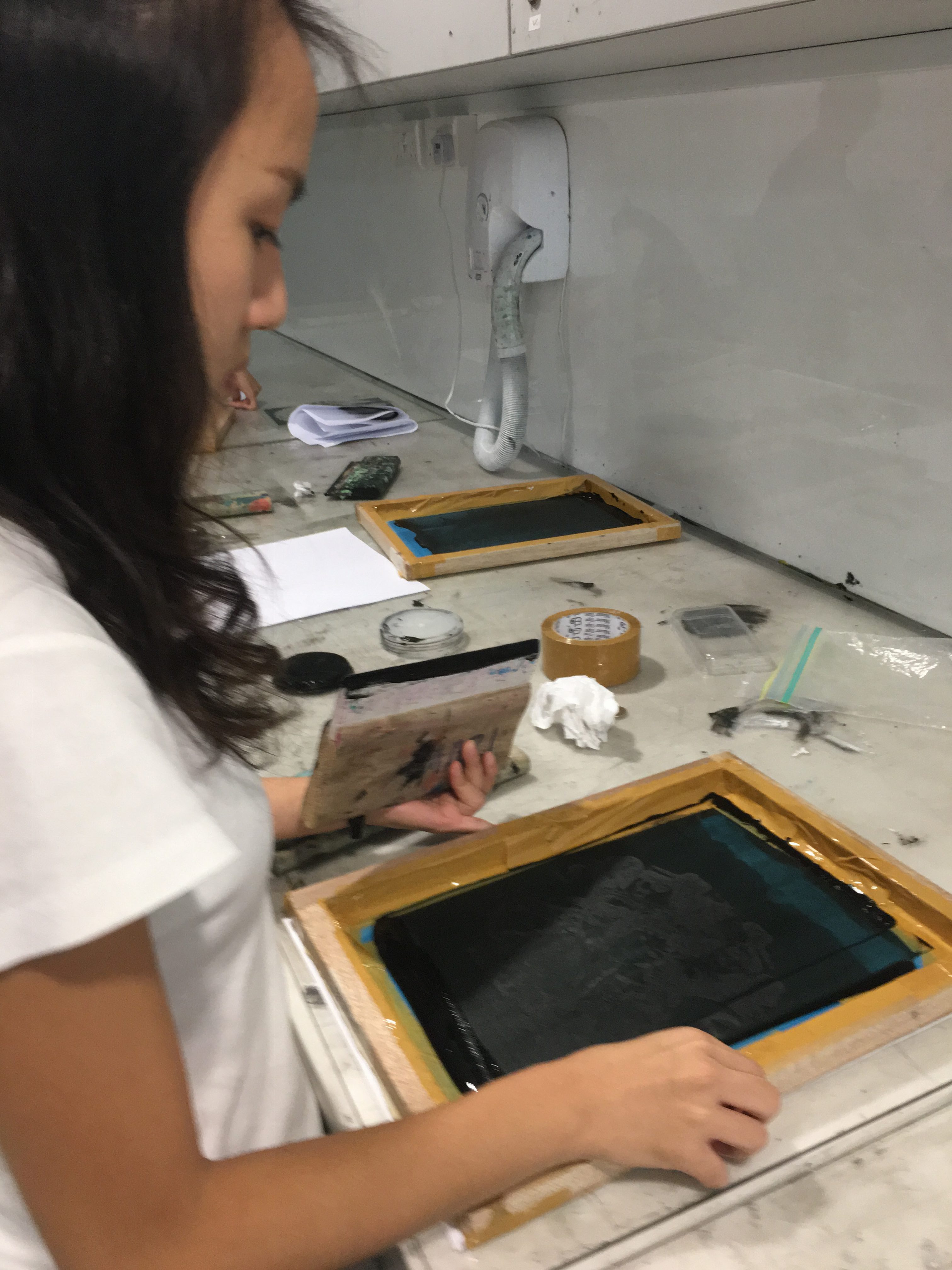 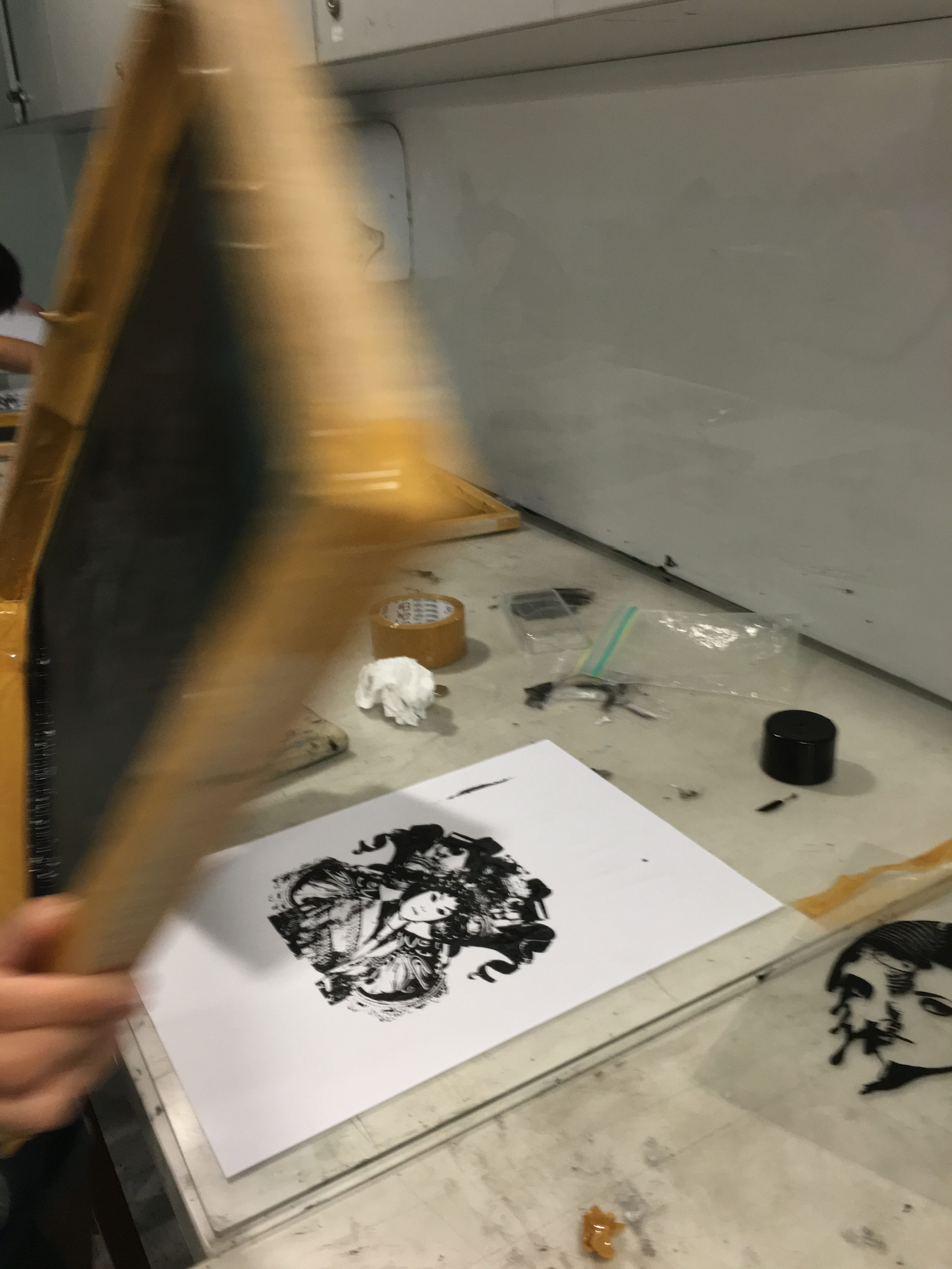 Trying it out on paper first! The other quote from the movie like  “He stuck us all at one literal tea time.” reminds me of someone who has a dictator-like quality to him and someone who has the authority to order peasants around and whatnot. Hence, aligned to the Chinese concept again, I thought of using images of emperors or kings, just basically individuals who had power during the olden days in China. Other images used would be anything related to royalty or being majestic.

The third quote would be “Where am I?”. This quote to me is a representation of entering into the dimension one is not sure of. In the original movie of Alice in the Wonderland or any renditions of it, there will this very iconic scene of a long table with a very generous amount of food, sweets, and desserts. I can’t really find a picture of it but I found an imitation of it in an MV of  a song called “Twenty-three” by IU. This MV also follows the concept of Alice in the Wonderland as well. 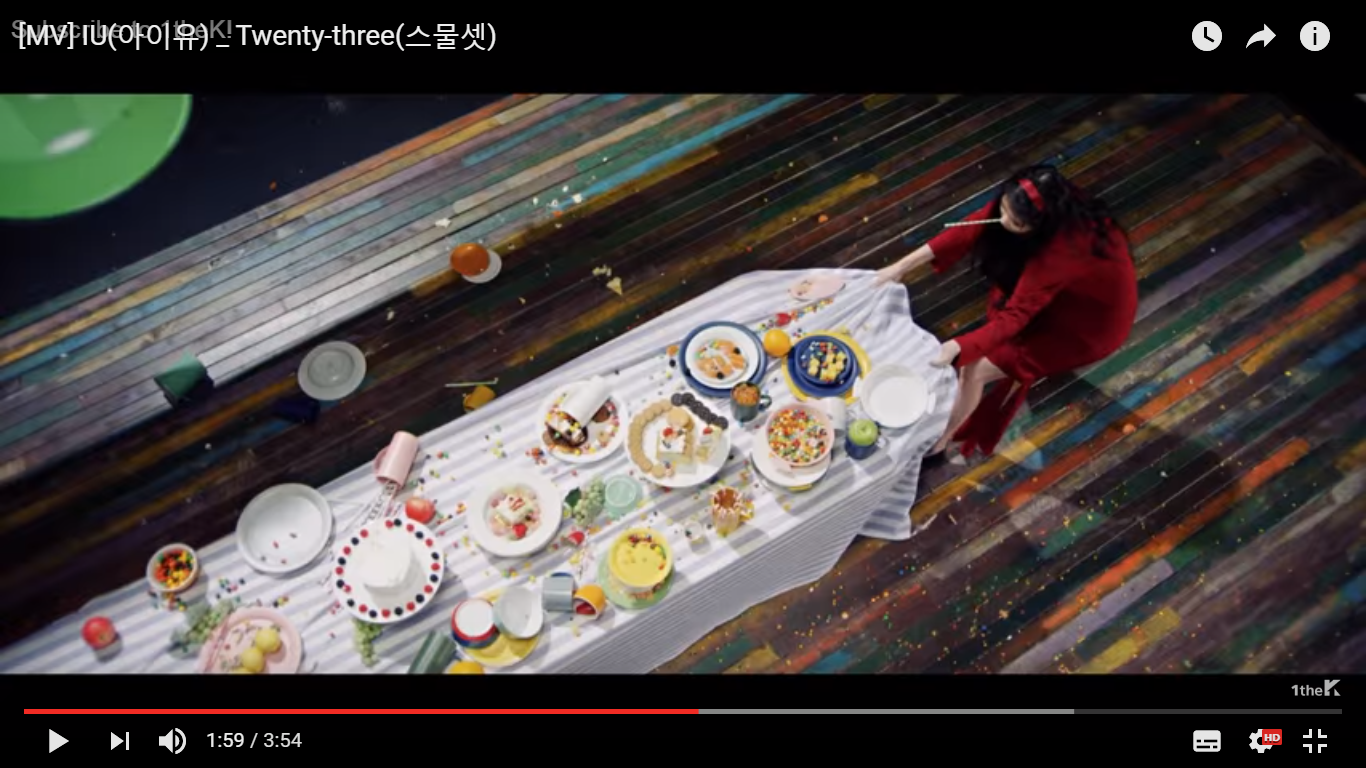 I feel that there is something fantasy-like when it comes this, like entering into a magical world with food that you’re not sure where they’re from but they all seem very appealing at the same time. Hence I decided to use this concept to the quote. Just that I added a twist to it by separating it into 2 styles – Chinese and European to add a little puzzlement and confusion in the design itself. Since that is what the quote is all about.

I have another design to the same quote of “Where am I?” This time I wanted to add a mythical creature to my designs since this quote is, as I mentioned, very fantasy-like to me. Hence, aligned to the chinese concept yet again, I used the picture of a dragon. This was also inspired by Studio Ghibli film of “Spirited Away” as they have the characters of dragons as well. The last quote will be “You cannot escape time.” When I read this quote it feels like there’s a very monster-like characteristic to the subject of time. Like a monster that catches you and you’ll be engulfed by it. I decided to design this with an antique clock as the subject, giving a mysterious vibe to it accompanied by the entrance gates of a temple as I felt that it gives a very authoritative and majestic quality to the clock itself.

So there you go! My ideas to the designs themselves. These are currently the designs that I have!