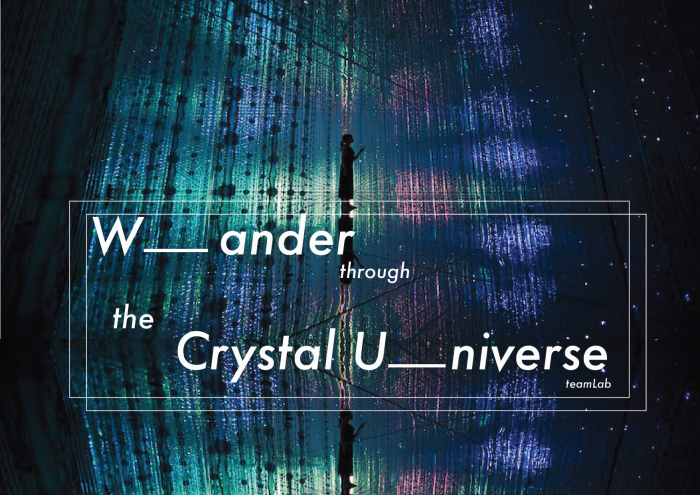 A Concoction of Human and Nature

teamLab is an art collective that consists of many specialists who bring to the table an array of installation pieces we can witness at the ArtScience Museum today. As a team of programmers, artists, engineers, CG animators, mathematicians and architects, this collective is indeed one that meld together different professions to create stunning interactive installations.

With a vision to successfully embody art, science, technology, design, nature into one, creating borderless immersive installations has been their forte. Having produced exhibitions all around the world, in Singapore, Japan, Sydney, New York, the team has seen their works go global. teamLab, as a collective, challenges their works to amalgamate human and its natural surroundings, bringing in our innate environment into the interactive, immersive realm.

Digital technology has allowed art to liberate itself from the physical and transcend boundaries. -teamLab

Indeed, this is apparent in their portfolio of works.

I m m e r s i n g into the Life-size Installation: Wander Through the Crystal Universe

Evaluation of image realism should also be based on how closely the presentation medium can simulate dynamic, multimodal perception in the real world… The image would move beyond simple photo-realism to immerse the viewer in an interactive, multi-sensory display environment.

Wander Through the Crystal Universe, as mentioned by Fisher, is one that submerges its audience into the massive life-size container that brings its audience into a whole new realm. Mesmerising orchestra of moving light points creates an abstract narrative, bringing the audience a whole new experience. The phenomenon of “suspension of disbelief”, when teamLab engulfed the audience with a stimuli of reality (not in its entity), through stimulating the audience visually and auditory. What is created is a realm of not unquestionably what realism looks like, but an augmented, tweaked reality, as if of a different world. The circumambient forms an expression of a world inside Crystal World, an imaginative, impressionable space created through the combination of light and sound effects.

Audiences can fish out their mobile phones and gain control of what is displayed in the Crystal World. A universal element is selected, by simply swiping in the direction of the Crystal World. The element will then be shown through the changes in the light points that lights up and are created. This creates a different “cosmic” experience for the audiences. With interactivity as a key part to appreciating this piece, distortion in the flow of the narrative may occur when one selects a universal element while one is simultaneously showing on the installation. The abstract representations of the universal elements might be distorted in a non-sequential narrative, showing immediate changes once a universal element is chosen.

The “surprise” element to the installation is the interaction that is allowed by the audiences, by changing the effects of the light points. Removing the passive characteristic of the piece, audiences can choose their type of telepresence with mobile control. This choice factor is the only thing that is non-programmed, totally up to the sovereignty of the audience.

In the ever-changing narrative of the effects of the light points, it created a series of possibilities, creating an entropy. There is a sense of unpredictability as the narrative can change with a click of a button on the mobile by any of the audiences. For Wander Through the Crystal Universe, it is of low entropy because of its structured and finite number of possibilities. Yet, entropy in this installation may not be wholly disordered. Since the narrative will flow from one to another with the change in the effects of the light points, the instances where the change is not stark, order is still in place. In the instance of a sudden transition, disorder occurs. Hence proves that the entropy here does not always lead to a disorder.

Indeed, digital art that taps on technology and science is moving forward, putting on the table new forms of art appreciation. Unconventional, non-traditional pieces reflects the advancement of the society, where technology plays a huge role today. “Art reflects the state of the society” and likewise, the new era of art places its medium on technology and science. Nam Jun Paik, the father of video art, pioneered the idea of creating art digitally (video art), pushed the boundaries of the traditional mediums. Advancement in technology also has played a part in making digital art more accessible and relatable to people of  all walks of life. We now live in the era where art starts to mould itself, digitalising, gearing away from the conventional brush and paint, pushing the boundaries of the new medium.

Nerdist – Explore the Cosmos in the “Crystal Universe” Installation

Entropy and Art the View Beyond Arnheim

Art is a Reflection on Society and the Times

The Rise of Digital Art