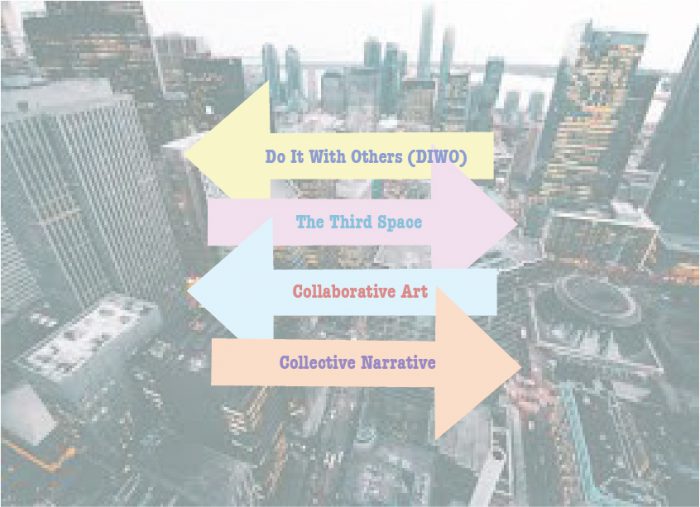 DIWO, otherwise known as, Do It With Others, is a concept created by Marc Garrett, the founder of Furtherfield. A new perspective brought forward to encourage collaboration, this has shifted creative production from being top-down to being collaborated. In the first half of the semester, Experimental Interaction class has emphasized on the idea of Doing It With Others (DIWO), The Third Space, Collective Narrative and the idea of collaborative art. Moving from The Tele-stroll to glitching up images, every project has an essence of collaboration and or using The Third Space as a medium. Each project has opened up my perspective on the realm we can work with for artistic productions, living up to its name of being experimental and bringing engagement to an interactive manner.

The founding fathers of Open Source and Furtherfield both have the same vision – inculcating openness in the sharing and learning of knowledge, tapping on the idea of collaborating with relevant counterparts to produce a much greater good for the society. Each has a bold statement that pushes for the once conservative playing field of talented individuals. Founded between the 1950s to the 1960s, Open Source allowed the virtual sharing of content on the World Wide Web, stripping its monetary value. Opening the gate to progress and the advancement of the society through the sharing of knowledge, I would boldly say that their initiatives have played a huge part in shaping the world today. Take Steve Jobs’ Apple for instance, it is undoubtedly seen everywhere. (In fact I am using one right now.) Steve Jobs started Apple with open source components and then creating a closed source operating system called the Mac Os X then produced personal computers for home that revolutionized the usage of computers and thereafter our mobile phones and tablets. Dare I say, such radical moves advances the world, creating a different social culture altogether, a breakthrough.

Taking a leap of faith to break the stereotypes of art culture in 1996, Furtherfield is  a pioneer that broke the conservative culture. The emergence of Furtherfield created a more competitive and varied art scene to the one that was once flooded with elite artists. Going beyond just the four walls of a gallery, Furtherfield also created a platform that can host greater audience and boost viewership for artists on their humble first start-up website hosted at Backspace. Transforming the interaction to a two-way one, Furtherfield is a platform that allowed for conversations between the artists and the audience, a different approach in the appreciation of art. Besides, the Netbehaviour email list has encouraged people of the same interests to be connected through opportunities for dialogues, bringing people together.

As a dynamic art organization that is very involved with grass-root and ecology projects, Furtherfield is like no other. Creating a platform for the arts, technology and an advocate for social change, this perfect hybrid is indeed an exemplary addition to the art scene. 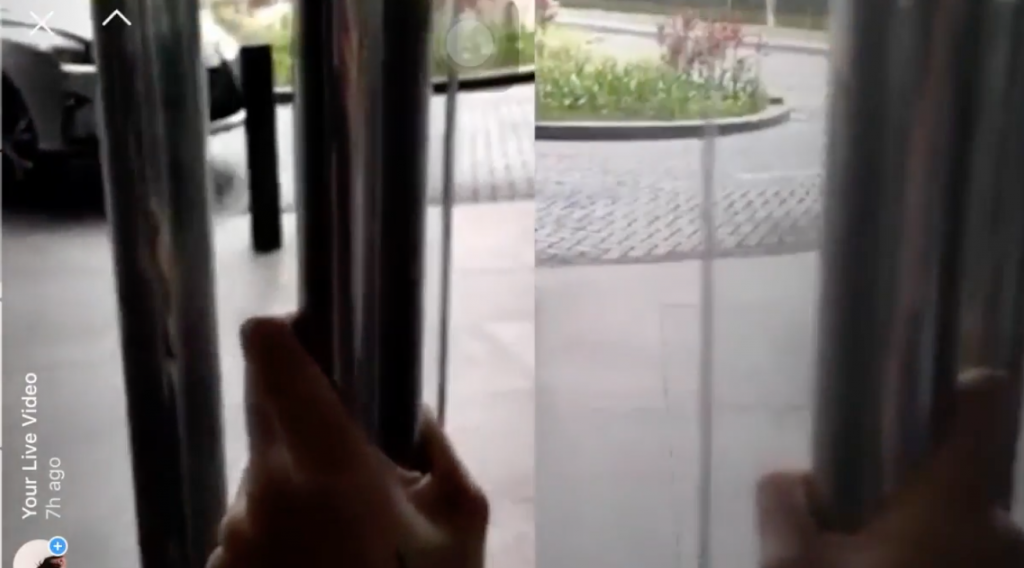 A screenshot from The Tele-stroll – Two screens, as if we are opening a single door

Moving a step ahead, The Telematic Embrace, an exercise we did in class emphasized on collaboration and corporation as a social practice. 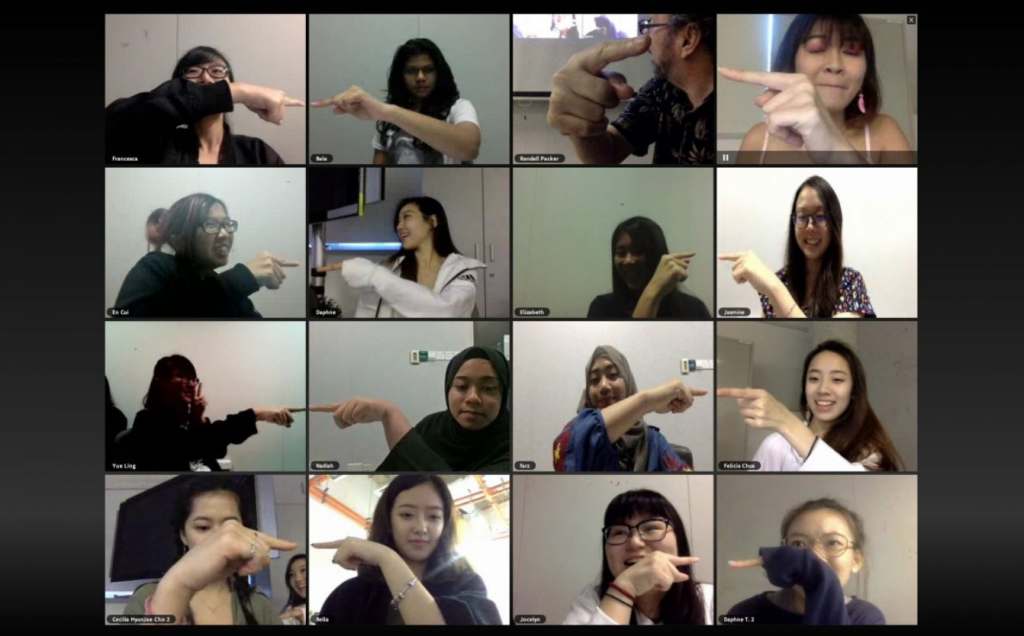 A screenshot of The Telematic Embrace, an exercise did in class

DIWO at the Third Space can be clearly seen. Moving interaction to the Third Space, we unleashed the playfulness of the medium by making use of the nature of the split screens placed in neat rows. Creating different ways we can be playful with it, finger touching, to finding items of the same colour, this collaborative project creates a form of collaborative art. 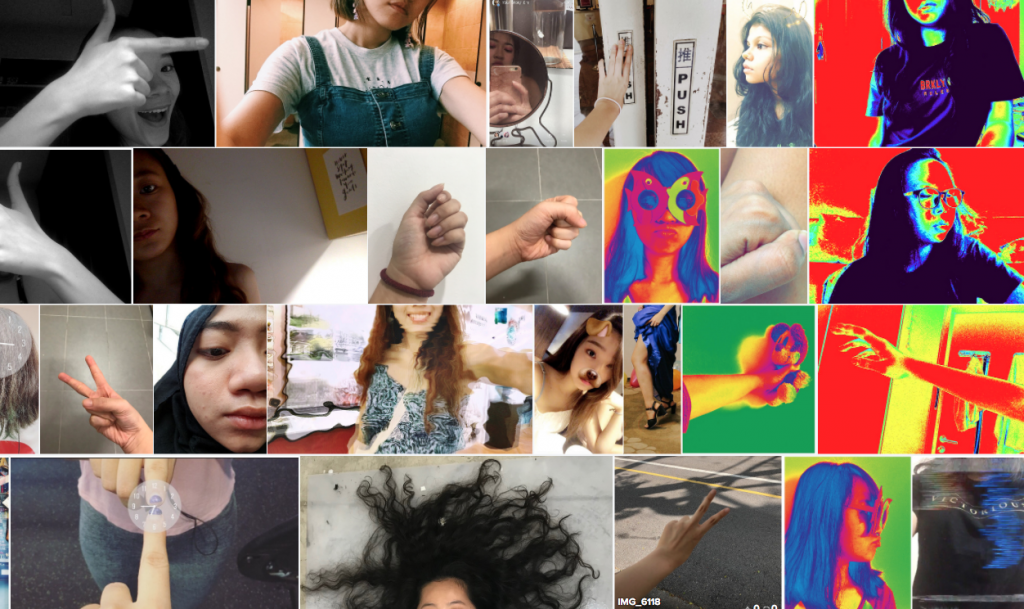 A screenshot of the Collective Body on Flickr page

The Collaborative Body, a-photo-a-day project of our body parts pieced together is one that demonstrate a collective artwork. Different photos pieced together forms a collective body of oneself, as if the body is malleable enough to be placed in a random position, altering the conventional viewpoint of the body. 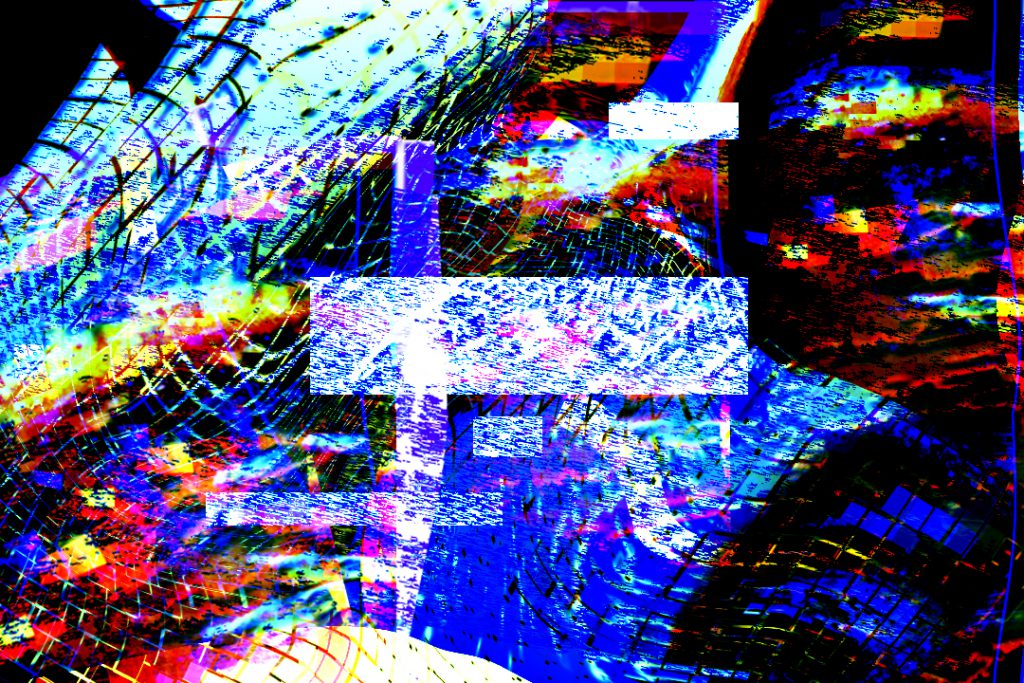 The Exquisite Glitch is a compilation of the different modifications that was made to the image, passing it down from one classmate to another. The final product is like an outcome by a computer virus, glitched, unrecognizable, nothing like its original. This is also a collective artwork that requires the input of more than one person to fully create.

DIWO, a term that involves the contribution of a mass looks at a more unpredictable, more unscripted form of art production. With the involvement of a group, no one person can predict what the outcome will be since the final product is the summation of all individual efforts through a collaborative technique.

Dissecting the projects we have done thus far, it is of no doubt that the DIWO concept is one of the main focus. Using the Third Space as a medium and the Collective Narrative as the the main way of production, DIWO the underlying concept behind is brought forth. As the generation that will rise up, this overarching idea of DIWO will be one that will expand in greater in depth and in width. Standing on the shoulders of our giants, we hope for a brighter tomorrow.

Do It With Others (DIWO): Participatory Media in the Furtherfield Neighbourhood 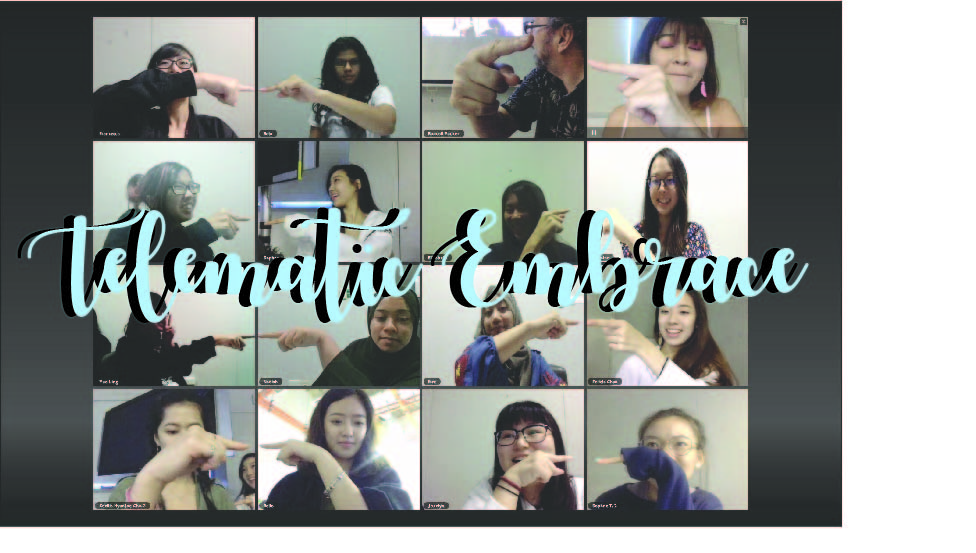 Connected to Adobe Connect together as a class, we were all immersed in our devices, busying signing up and starting up the application. That marks the end of our human contact. Migrating all forms of contact to the Adobe Connect application, this is the beginning of us hanging out together, while being alone! 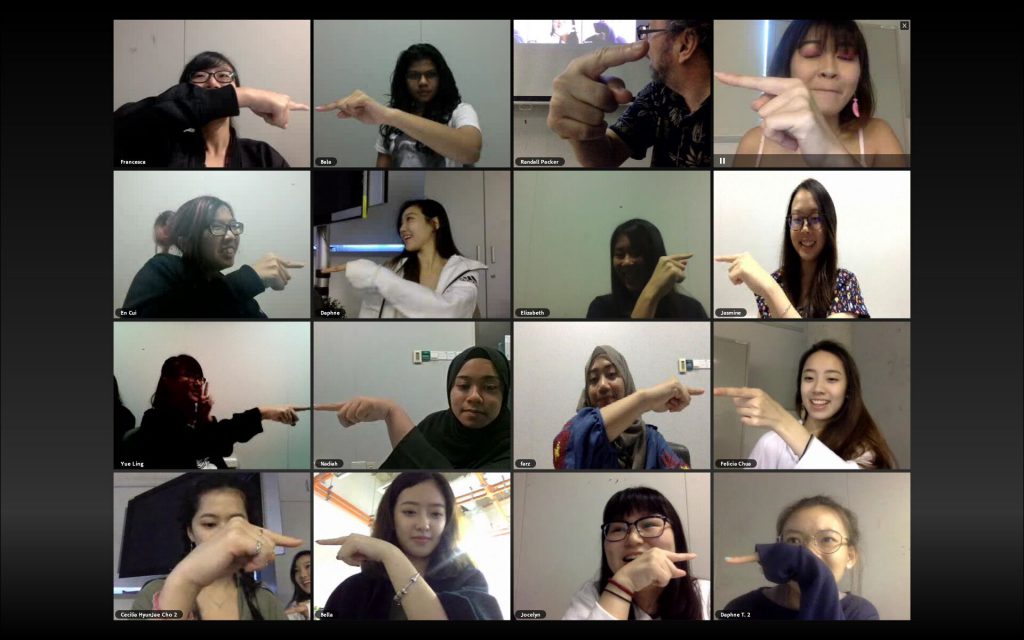 Our attempt at letting our index finger touch with the person beside us.

The get-together as a class at the Third Space brought us closer as individuals than merely seating in class learning about the Third Space and not experiencing it ourselves. The following two tasks we have to do allowed us to have interactions with our classmates without physically being close to them.

The totally arbitrary line-up of the screens gave us all a partner to work with to have a complete Index Finger Touch as a class. For me, I worked with Jocelyn with the Index Finger Touch! In fact we were seated a few seats away for that particular lesson itself. We might not necessarily be the closest in the class, yet we experienced a closer connection in class through the activity in the Third Space. 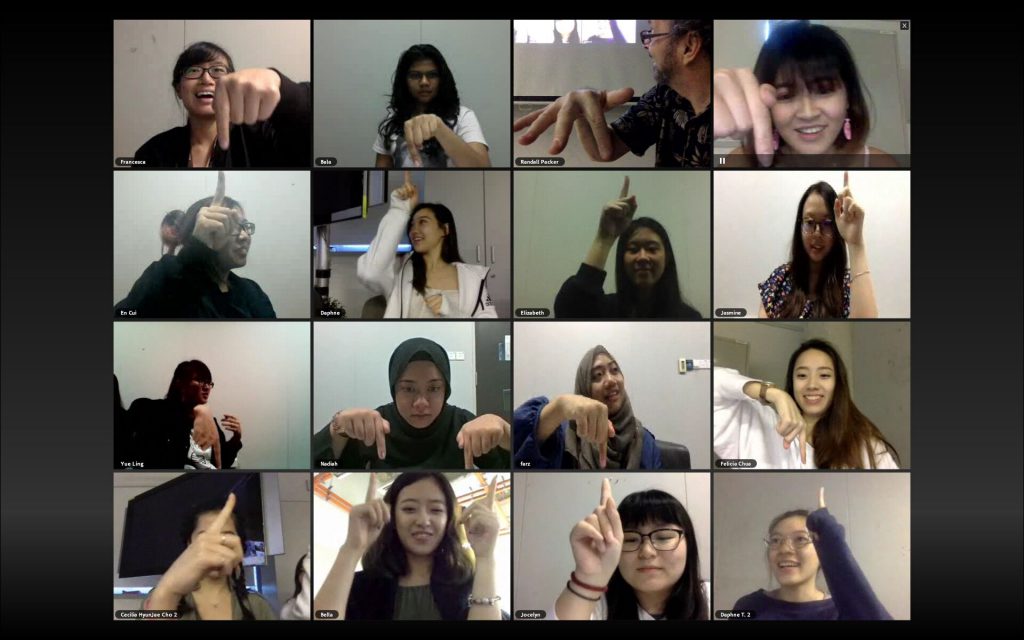 Our attempt at making our fingers touch with the person above or below us.

Similarly, for the second task, we attempted at making our index fingers touch with the person above or below us on the screen. I was paired with Felicia. Although we were actually seated beside each other for that particular lesson itself, the experience was different altogether. 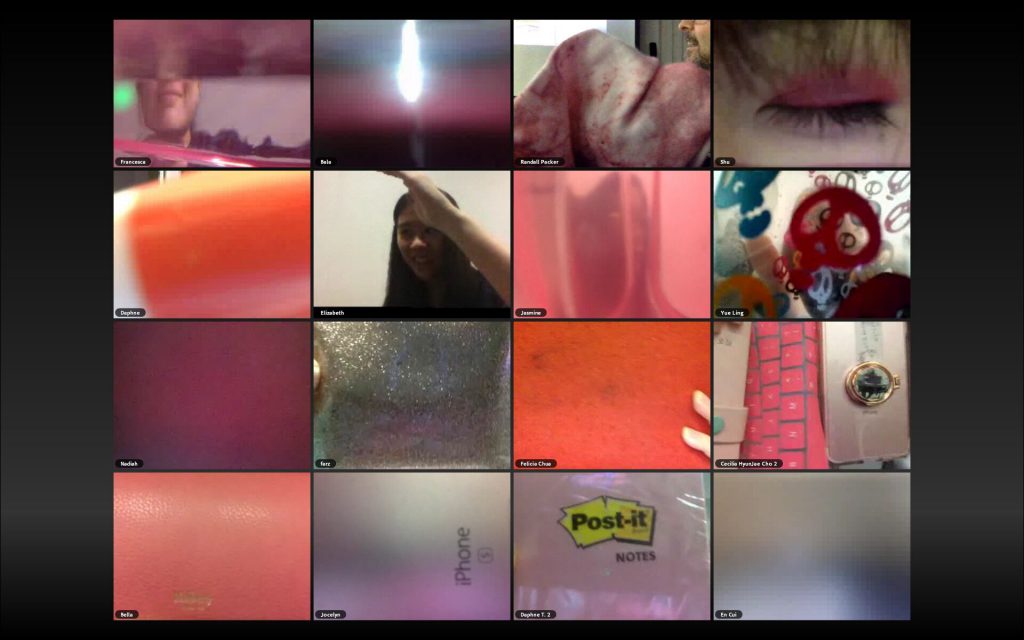 Our attempt at finding a pink object. 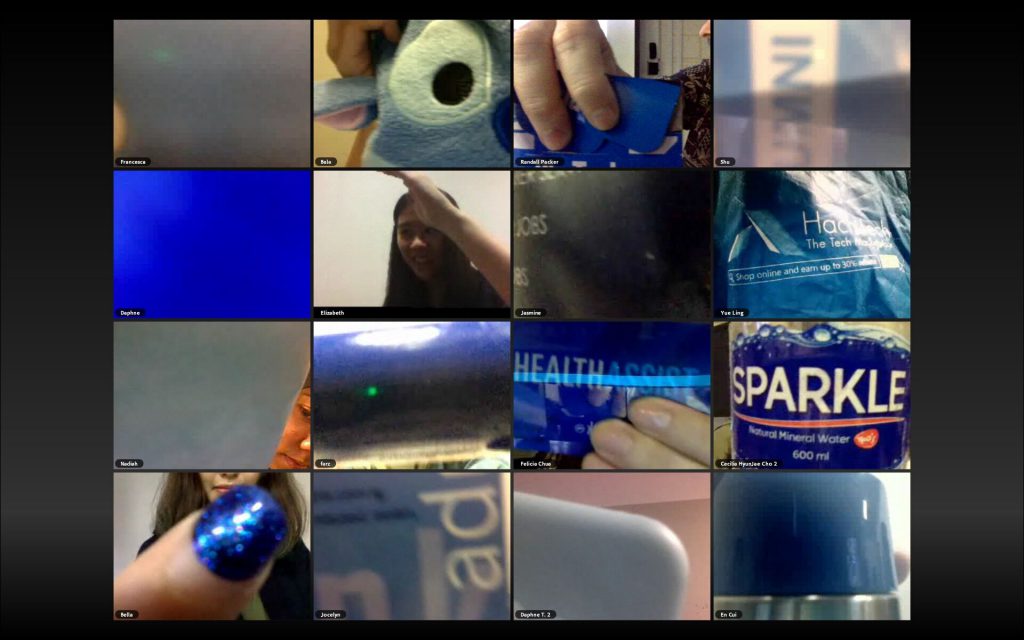 Our attempt at finding a blue object.

For these two tasks to be executed well, we had to find commonalities between all of us. We went playful with it, and had to negotiate on a colour more common that we can work with. The Third Space has allowed us to DIWO (Do It With Others), creating a new platform for play to happen. Ostensibly extending the area of play from brick and mortar to the virtual Third Space.

All in all, this micro-project done in class showed me a new paradigm of collaboration on the Third Space and creating a new platform of play for this technologically savvy generation of ours. With such platforms, no doubt our quality and quantity of communication has increased, with more human connection without the physical touch.