Initially, I wanted to focus on the form, shapes and patterns of the buildings to represent Shenton Way by looking at cubism. This would also convey the movement of a fast-paced, growing atmosphere. I wanted to also capture the organised and steady rhythm Shenton Way gave off with the buzz of the workers. I first researched some graphic design that gave off a messy and hectic feeling. On the other hand, I went off to pinterest to collect some inspiration in creating a moodboard. However upon research, some of the graphics gave off an upbeat party vibe instead of a paced working vibe.

I first began looking into the architecture elements of the building, be it the use of lines, colours or shapes. I started looking at the photos I took in Shenton Way and started sketching and illustrating on Illustrator. I collaged my photos on Photoshop and morphed it into a 360 degree view to make it interesting- rather than a plain landscape vectorised illustration. I was inspired to do this when I saw an Instagram post similar to this: 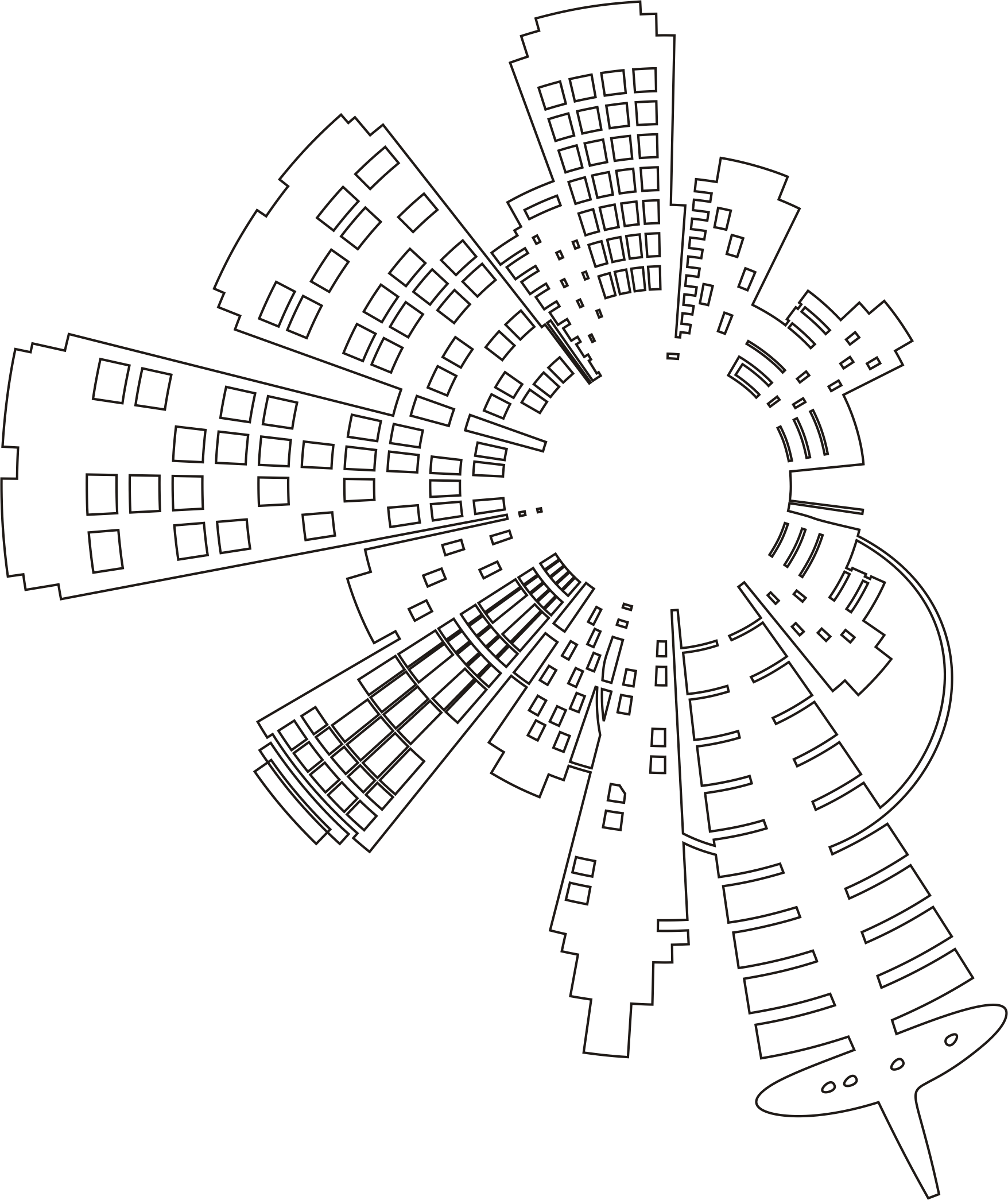 Adding on, I created a building made with blocks of squares and rectangles to show the reflective-glass features on Shenton way buildings. Mimi commented that my overall design was inconsistent, separated and it looked more like an architectural zine. She advised me to bring out a narrative story on Shenton Way to make the zine more appealing. How do I balance my vision of the place with my ideas and also express Shenton Way from an outsider’s perspective; I wondered. This got me into a ‘designers block’. This led me into further research on more graphic forms of the economy and banking in Shenton. I wanted to give off the essence of the economical growth in Shenton Way, since it is designated as the financial and banking hub. It is also a a symbol of Singapore’s rise to a modern nation. 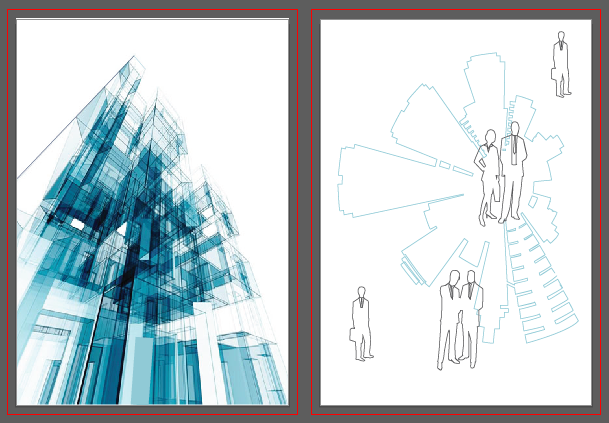 I experimented on designing the cover page by playing with the idea of a building with office workers intertwining in the title. However, upon completion, it seemed boring and uninteresting so I decided to scrap it off. (as shown below) 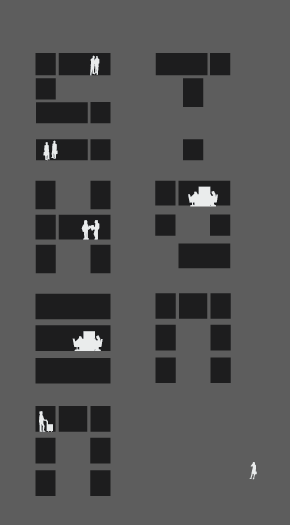 After consulting with Mimi, I decided to take another look at my photos I took in Shenton Way. I think one of the obstacles along the way was drifting off with the idea and concept you initially had, ignoring the actual essence of the location and the photos you took.  I also re-looked at the write-up I wrote for Shenton Way. This gave me a new and clearer picture on how I wanna stylise and design the zine. 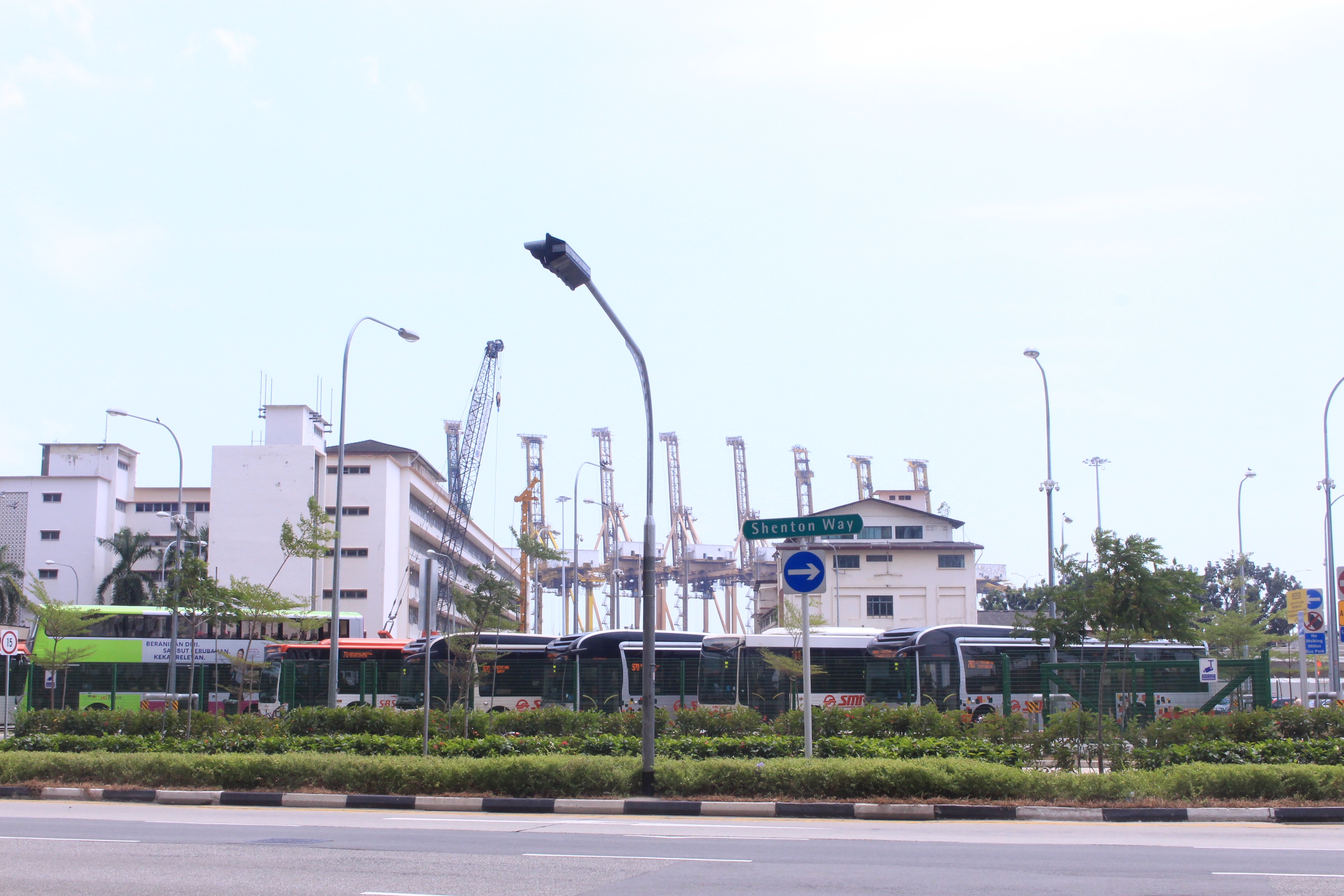 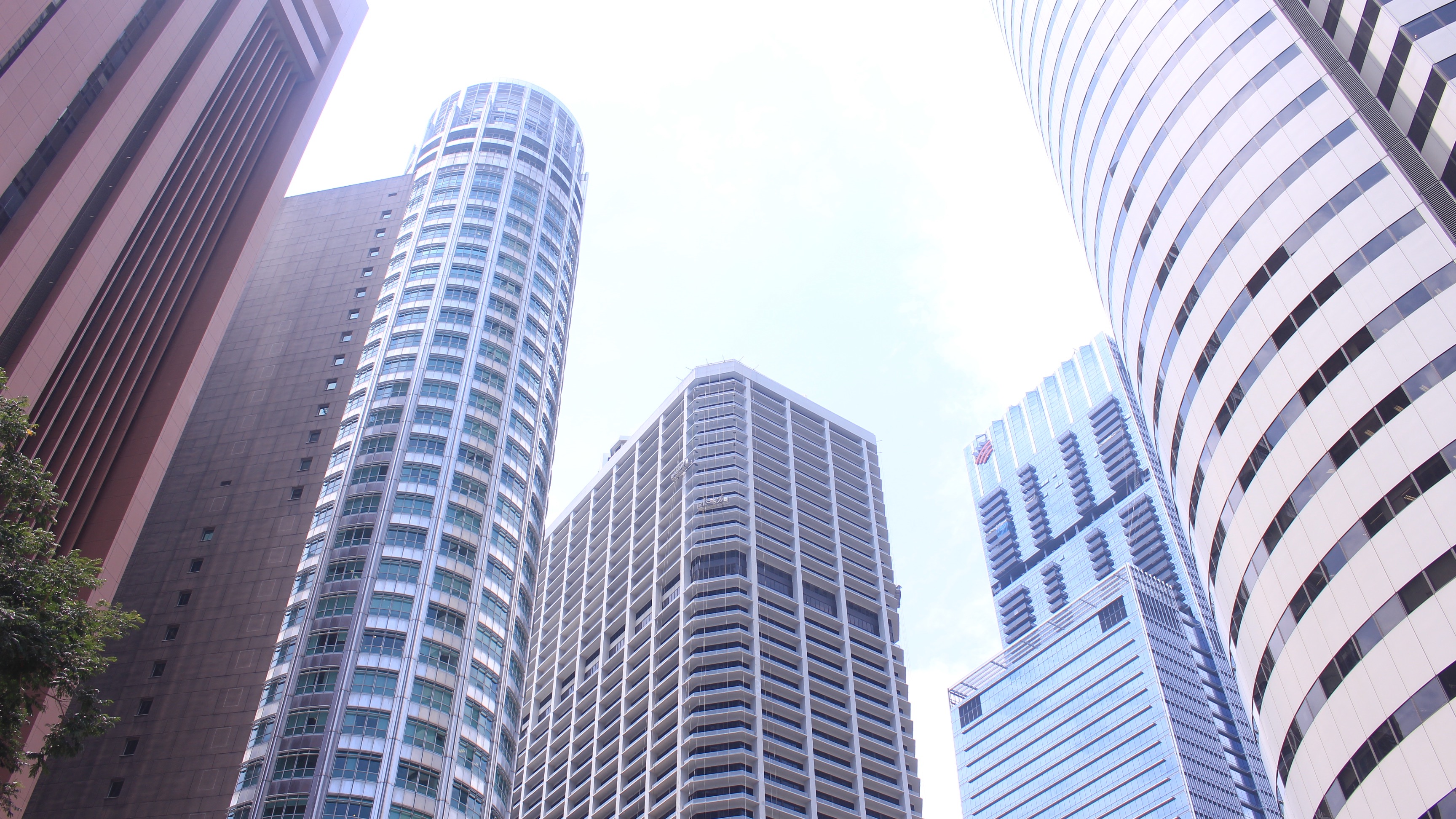 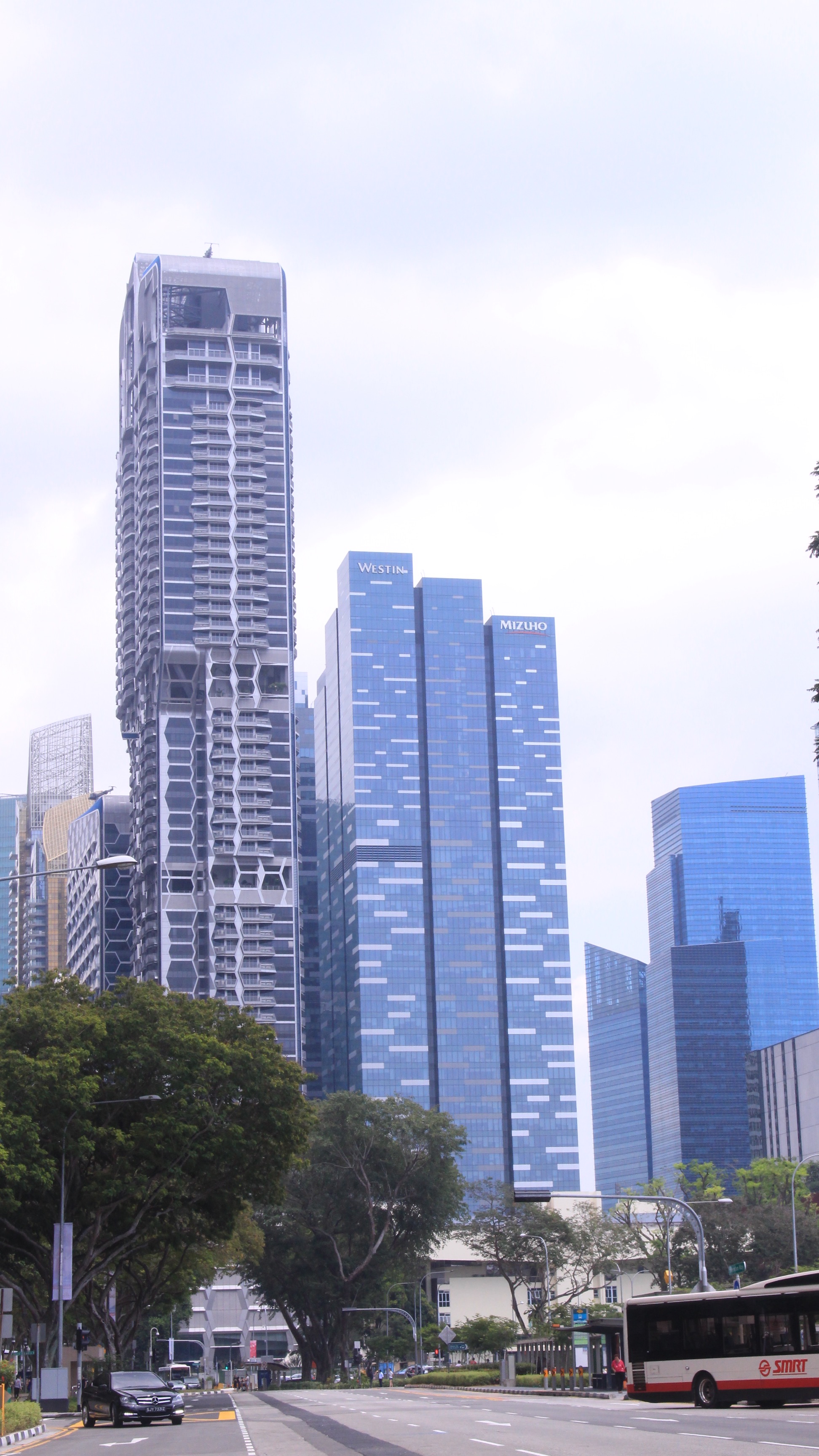 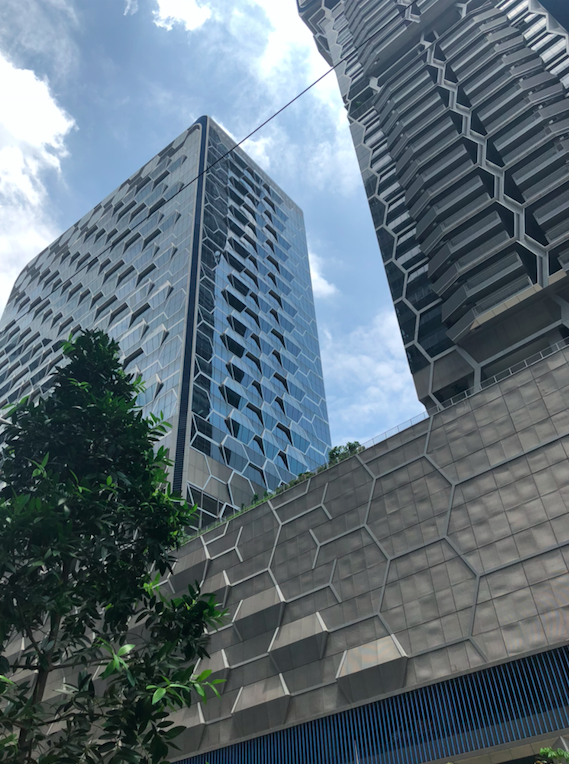 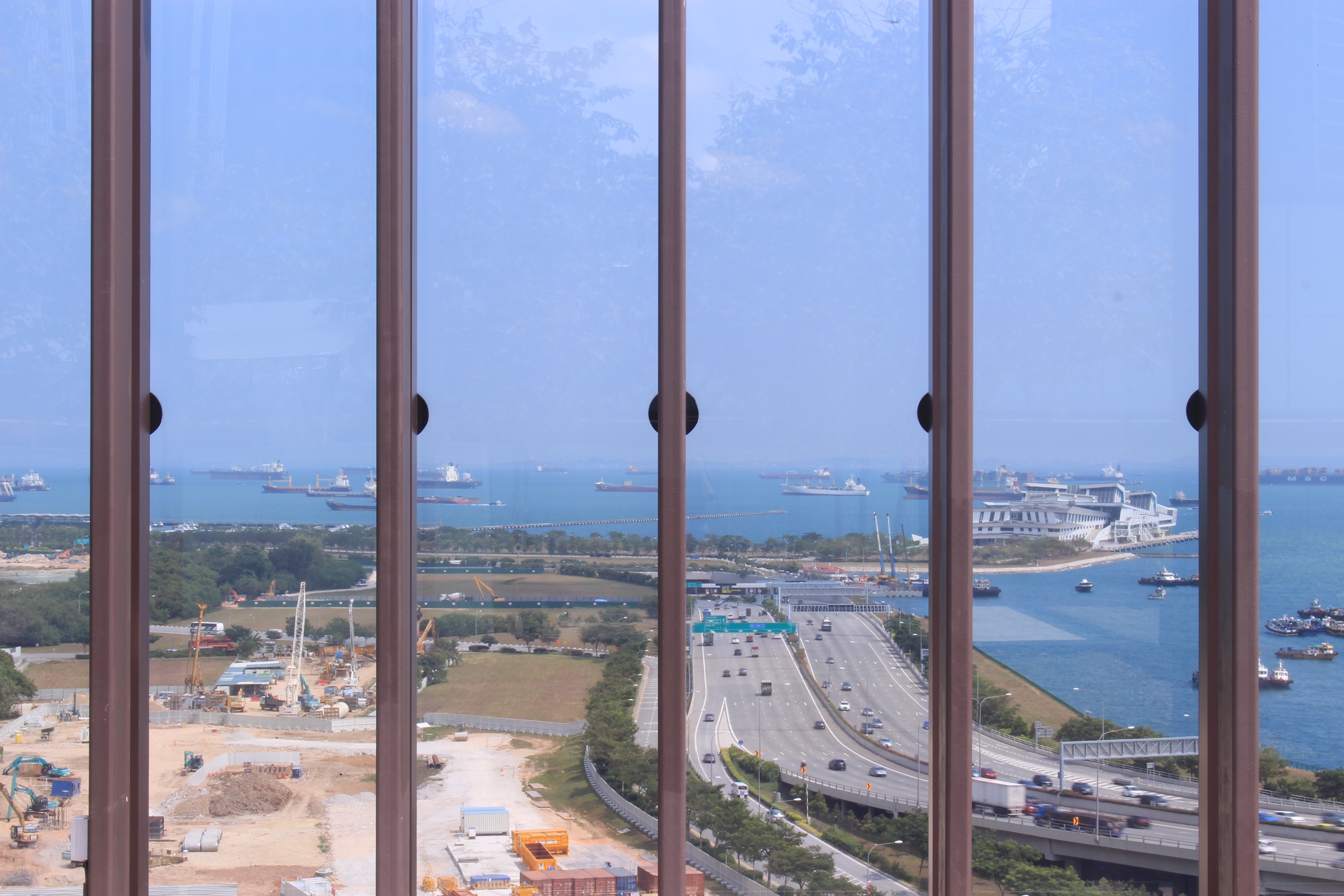 Shenton Way is known as Singapore’s Wall street- banking and financial hub. When I break down these words ‘finance’ and ‘banking’ – currency exchange comes into my mind. Hence I focused on the idea of currency exchange. I depicted this by creating vectors of the different currencies of the world: Yen, Euro, Dollar, Pound, Won and of course including the SGD (showing Singapore’s first president, Yusuf Ishak since the location is in Singapore). I also added office workers walking around and pushing the currencies to portray the financial office life around the area. Moreover, to make it more of a narrative I included a character, a deer, to represent me wandering around the place. A character that is out of place and holds the curiosity of what goes on in this area. As a whole you may think that the deer does not fit into the scene and feels unnecessary, but this is what I wanted to portray. This led to the graphic design below. 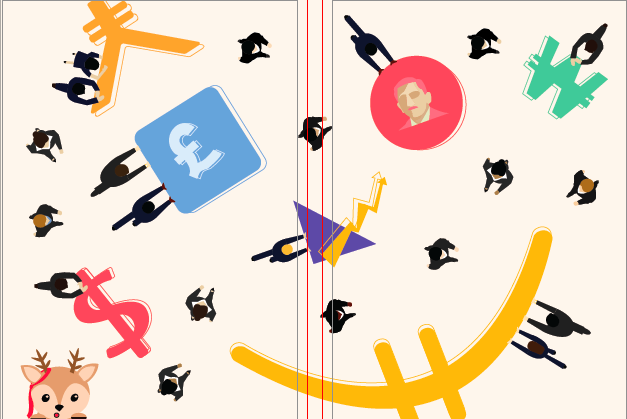 Keeping in mind that Shenton Way is a symbol of Singapore’s rise from “a small fishing village” to a modern nation. I wanted to portray this, as well as the new bus interchange built to serve commuters in the Central Business District in June 2017. Thus leading me to design an economical graph with iconic buildings of Shenton Way and the bus interchange. I also added overlapping text to add a sort of glitch or the messy incoming information and data that goes in the offices of Shenton Way. 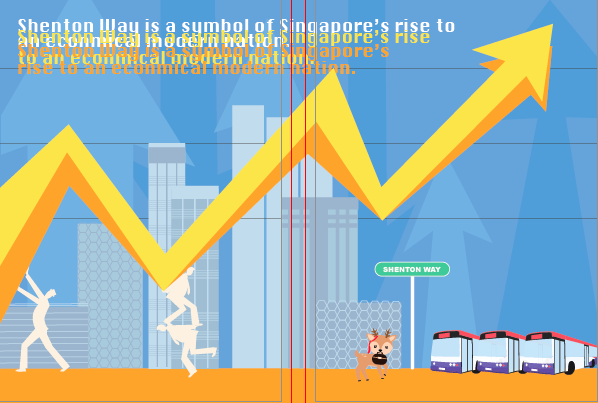 For the last double page of my Zine, I decided to incorporate my favourite spot in Shenton Way, where I unexpectedly came across.  I left the photo raw as I wanted to show the beauty of the raw land where its is under construction that may be built on for a future building. The allurement of the flat land before a rise of new modern buildings. This spot is from the Singapore Chinese Cultural Centre rooftop garden. I decided to work my graphics on it to shows the element of  ‘growth’ by using the crane and the office workers inserting coins into a piggy bank. Furthermore, I wanted to add my thoughts into this page by inserting a comment by the deer. 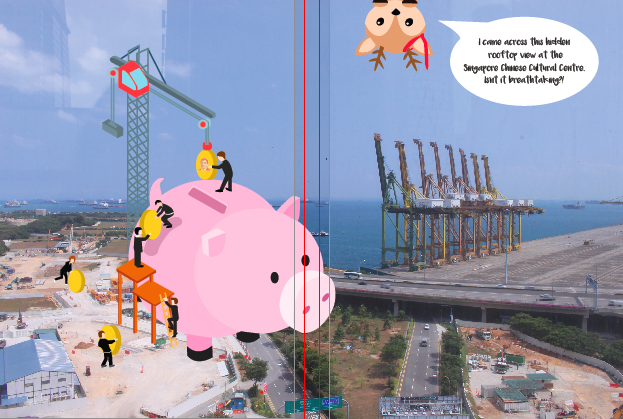 Overall, I chose to do a double-spread page for all my pages to create a landscape to give a bigger impact on the location. Moreover, I chose a colour scheme of toned-down solid colours crossing over to pastel colours to make it vibrant to reflect the lively energy in Shenton instead of a systematic monochrome colour scheme – implementing complementary colour pairings.

I did not want my cover page to reveal where my location is and what the zine is about as I felt it should be shown through the graphics on the pages. Thus, it should only give a sneak-peek into the direction of the zine and an introduction of the character.

The first draft of the cover page (shown in the initial stage) was plain and predictable – not abstract enough. Thus I designed a cover where it shows the overall essence of the location without revealing the name of the place. Upon my completion of the design, I still felt like it was lacking and could be further improved but I was stuck on ideas for a double spread cover. Thus settling for the less. I feel like I can do better! 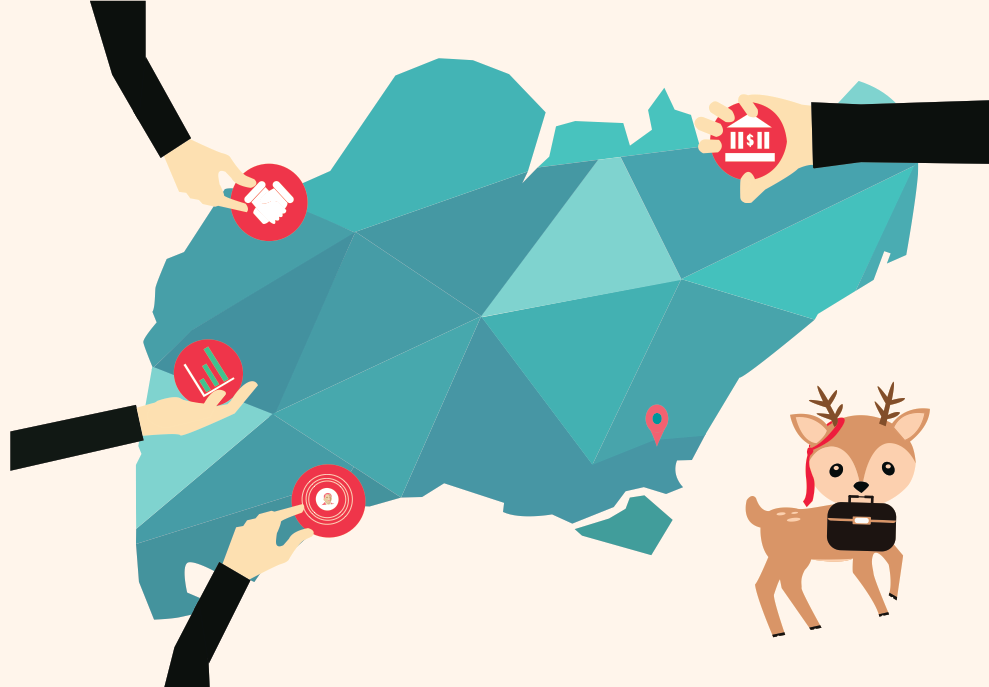 Onto the printing stage! Mimi suggested that we head over to RJ papers to see what they had to offer. To my surprise, they held collections of wide varieties of paper that made me overwhelmed with my choices. Being indecisive, I tried my best to cut to 3-4 different types of paper that I liked. It also surprised me how cheap it was even though I am buying 8 sets of each. I am definitely coming back in the future for my future projects. The aunt over there told me to buy more since I came this far and the price was very reasonable. I thought 24 A4 sized paper was more than enough for test prints and my final zine. Little did I know, during my test print, I used up 16 out of 24 before my final! I must say test printing is so crucial, which tested my patience in aligning and colour correcting the designs on paper. It is also an important medium to match with the concept of your graphics that can further emphasise your ideas. Nonetheless, i enjoyed the whole process in the creation of my zine! 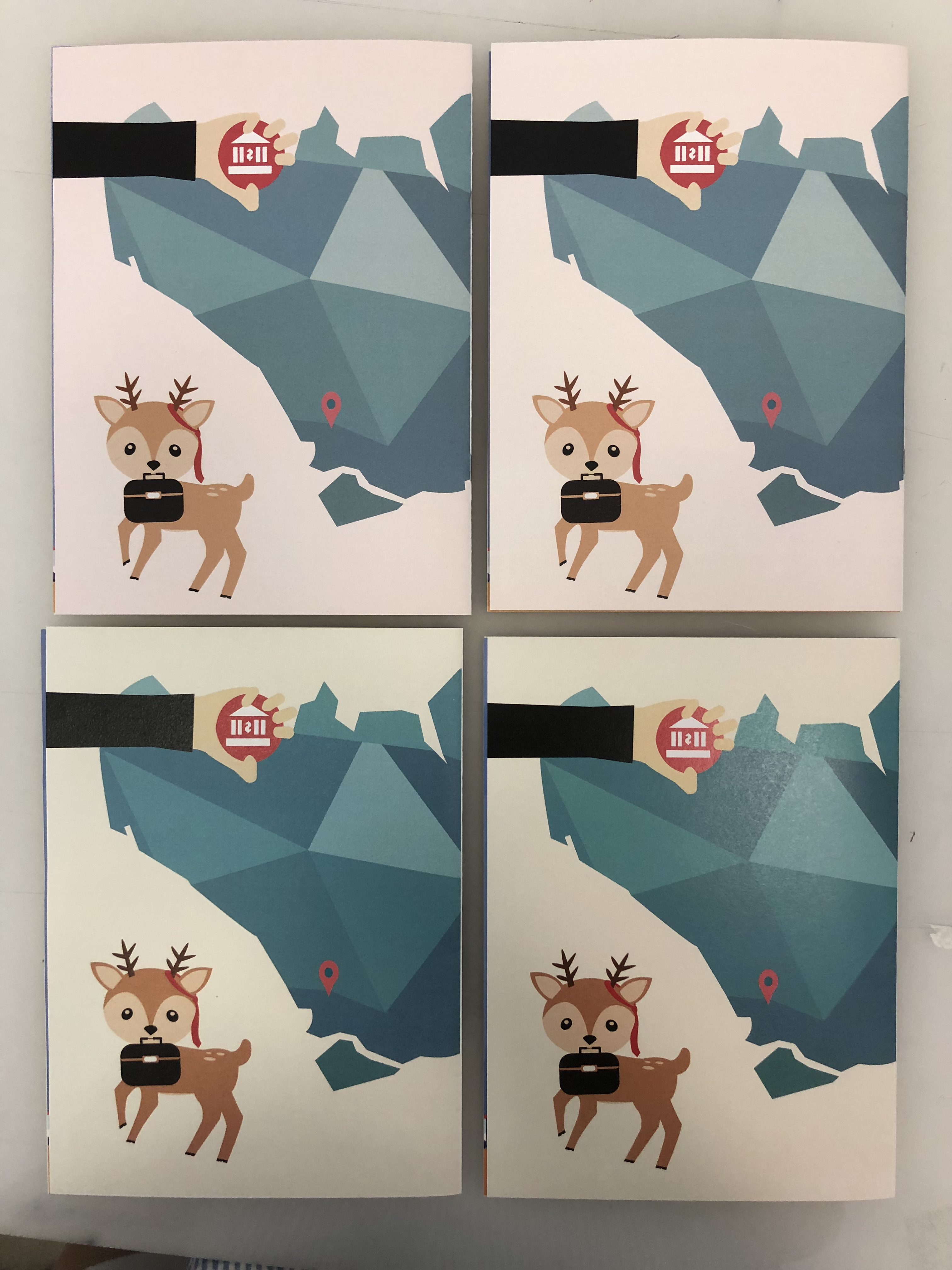 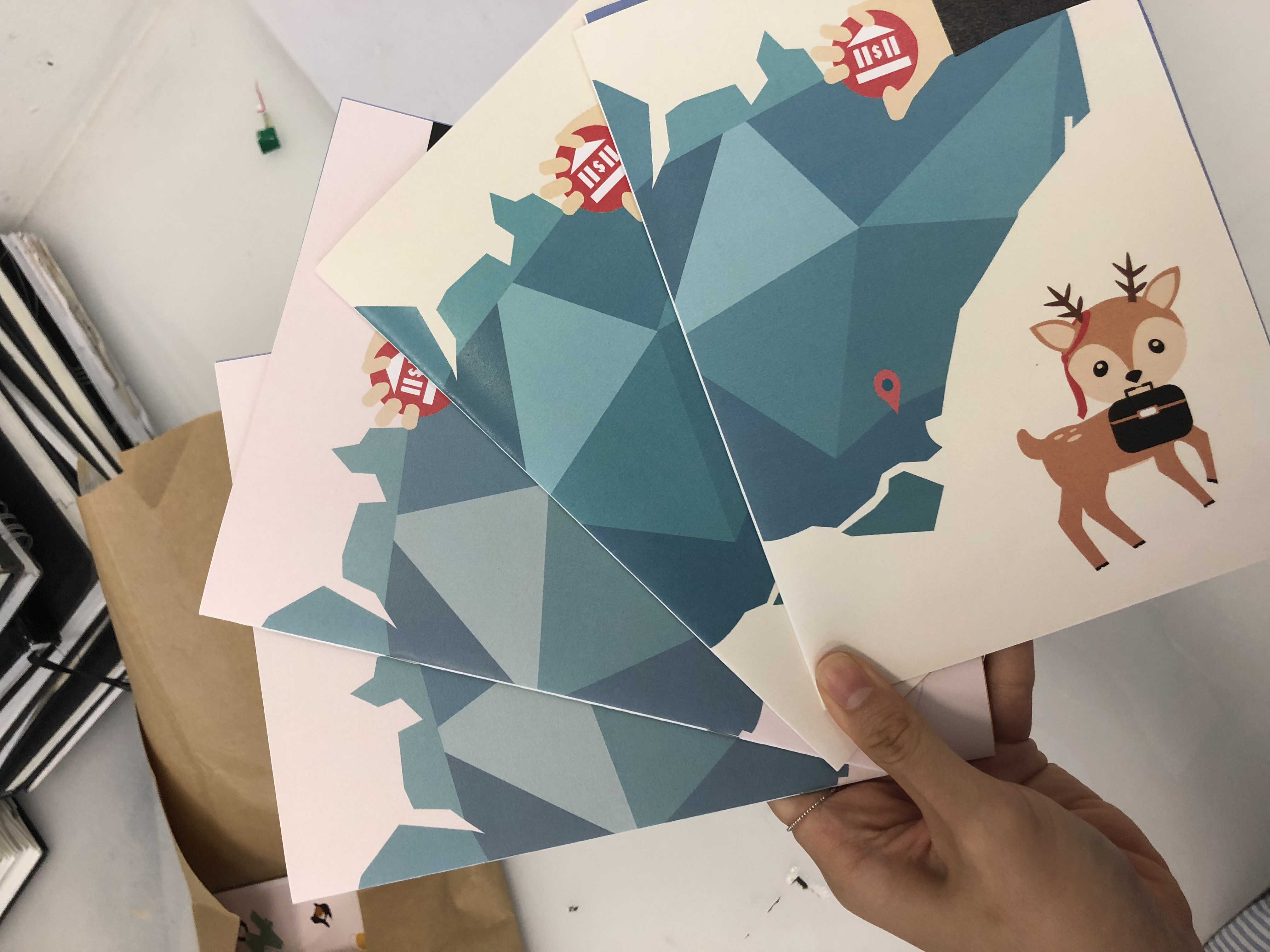 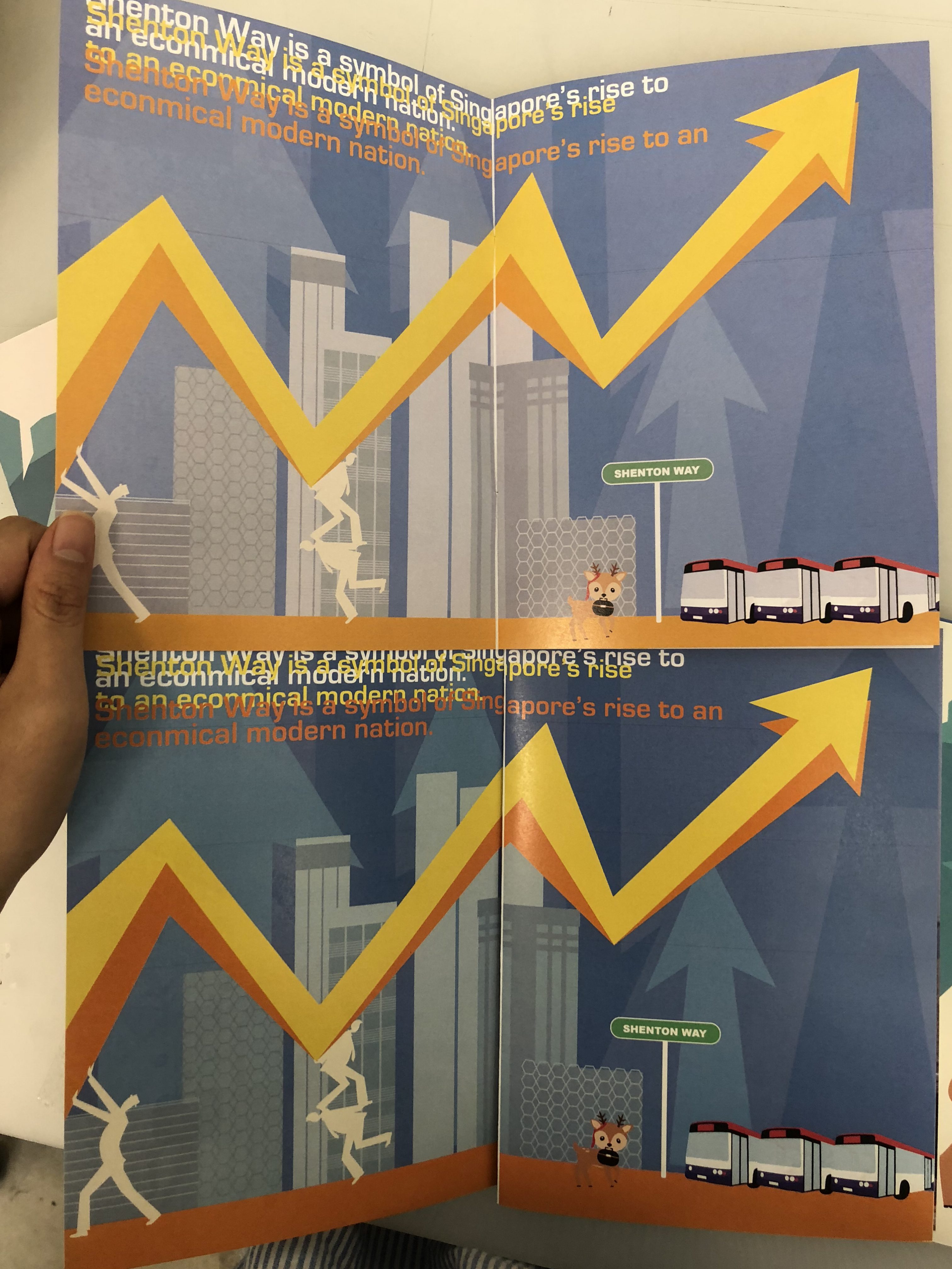 ….AND OFF TO THE FINALE OF MY ZINE!