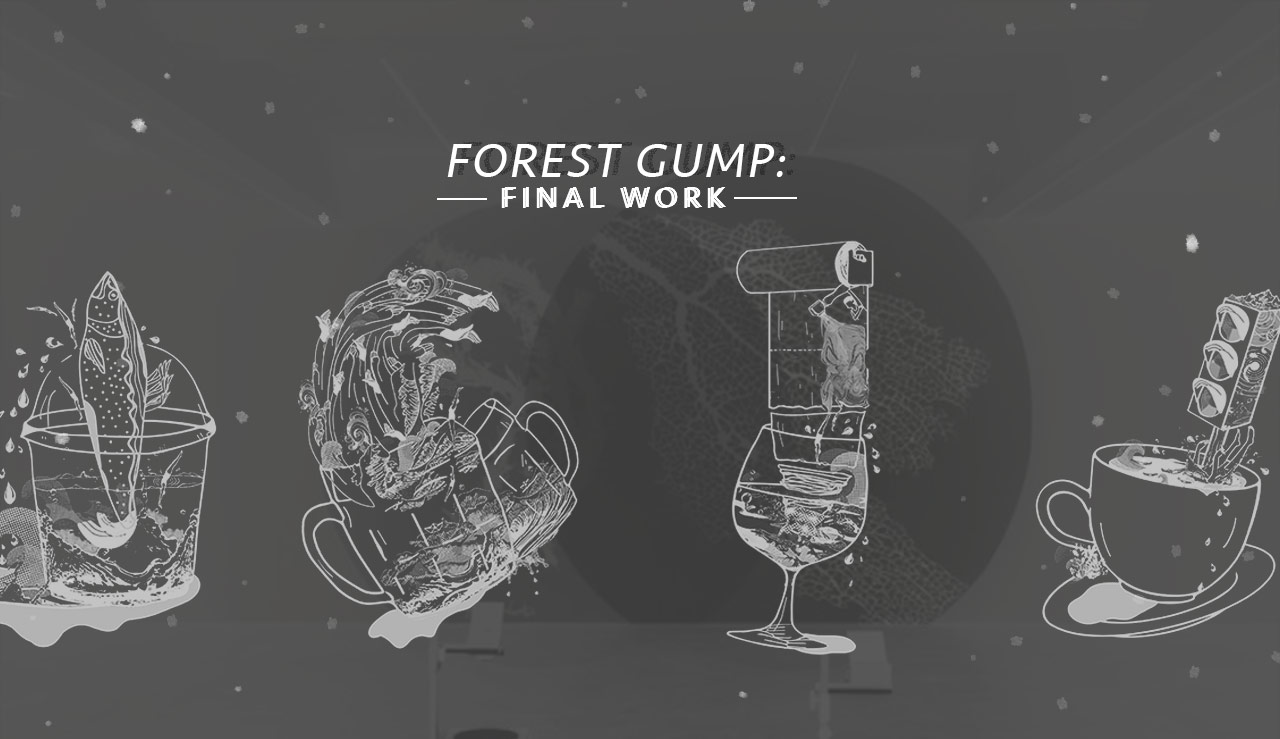 My compositions were mainly inspired by surrealism and the use of everyday objects to create an entirely different world of its own and allow others to be intrigued by the choice of objects used to represent different elements.

All four of my finalised compostions include the use of similar objects but in a different way. Some objects like the hands, are morphed into another object itself to give an additional personal meaning to the everyday object. Elements like water and cups are repeated in the compositions as they portray the meaning of life/moments/feelings to me.

I remembered Chungking Express as a memory filled film, where many different emotion were involved especially ones that make me feel like curling up into a ball on my comfy bed. It made me want to bottle up these feelings I felt and remember it for life. In fact, the quote that I picked from this movie aptly described how I was feeling.

“If memories can be canned, would they also have expiry dates, if so, I hope they last for centuries”

Sardine Fish – cans reminded me of sardine fishes and I made it big + popping out of the cup to represent the huge factor in our lives that leave a great impact on us. Sometimes, there are too many moments and memories that we want to protect and remember for life but there is to much to remember them all

Water – overflowing water represents the amount of memories we create in a lifetime but not can be etched in our head forever. Water in the cup represents how these memories and feelings can be so full of life and energy

Hands – the hands replaces the regular fin and tail of the fish. They add a more human touch to the composition and also how hands hold onto things. In this case, it is holding on to memories

Boyhood was a slow long movie/documentary that revealed its story bit by bit. The story didn’t hit me all at once but rather in pieces. At the end of the movie, I felt different, I felt like I have watched something that made me feel reflective about life and how a simple story could make me feel this way. Sometimes, that is how a moment makes us feel. Even the simplest moments can take over and seize us.

“You know how everyone’s always saying “seize the moment” I don’t know, im kinda thinking it’s the other way around, you know like the moment seizes us”

Waves – my representation of a moment seizing us just like how a wave can seem so harmless but is actually very harmful and powerful. Waves can even take away lives. Thus, when I read the quotes I immediately thought about waves.

Hands – I morphed hands into the waves almost as if the waves can grab or hold on to your life. They add a human touch to the composition

Water – the water in the cup seems to have its own life of its own and is very active. This represents the unpredictability of life and its moments

Her, was an extremely different kind of movie. It was strange yet intriguing. Although its something that I would have never imagined before, I could still understand his love, pain and other emotions well through the mood of the movie and its various shots. The movie had a unique touch to it and is definitely memorable.

“Sometimes I think I have felt everything i’m ever gonna feel, and from here on out i’m never gonna feel anything new, just lesser versions of what i’ve already felt”

Cup – the wine cup symbolises life and its emotions/feelings.

Toilet Paper Roll – the quote says that sometimes “you’re never gonna feel anything new, just lesser versions…”. In that way, a toilet paper once used will never be the same again. The next roll you encounter will look similar, but you will never be able to get the same thing back again, just possibly a different version of it. The rolling effect also symbolises how life will just keep rolling on and there will be more emotions/feelings to deal with

Water – the water in the cup seems to have its own life of its own, it has bubbles, splashes and even something similar to a whirlpool. It represents how quick a moment last and sometimes when its gone, the feelings of that moment goes with it and one will never be able to get the exact feeling back again

Coffee Filter – where the essence of the coffee comes out from but in this case, marbled water is coming out and they are my representation of feelings

Humans – additional human touch to the composition. Human is entering its own feelings

The Imitation Game was an eye-opening movie with intellectual scenes and reminders of why we should never doubt someone of their capabilities. We should never judge one based on their looks or on just one incident. We should learn to be patient and believe in others.

Cup – symbolises life and its moments

Water – Life’s moments and its struggles

Human – added human touch to composition. In this composition, the human is seen drowning and has the traffic light piercing through her. It is a scene that no one will ever imagine

The silkscreen process sounded very complicated to me when I first heard about it. However, I was also filled with excitement to try it out. The thought of printing my own composition on a tote bag also made me want to do it well so that I’ll have a new tote bag to carry out.

The process consists of several parts but we were guided well with the help of our work study. We were each give one screen to expose and had to make sure we took care of it well.

We were first told to label our screens so that we don’t accidentally take the wrong screens or spend time figuring which is ours. Then we had to slightly rinse the screen and pat it dry before going into the dark room.

After layering the light-sensitive ink onto our screens, we had to light it dry before pasting on our transparency print of our composition onto one side of the screen to let it get exposed. After exposing, we had to use the water spray jet to wash off the exposed ink in order for our composition to appear.

We were required to go back another day to re-expose our screens and get it printed onto our tote bags. Lucky for me everything went quite smoothly on that day besides accidentally tearing a small bit of my screen on the side. Thankfully, it was not a big problem as it could be covered with tape.

I did a few test prints before eventually printing into my tote bag!

AFTER THOUGHTS – I thought that the the whole process was an interesting experience and I’m glad I got to learn something new through this. I was always curious about the silkscreening process and wanted to try it out for myself. So I guess this experience is a strike off my to-try list 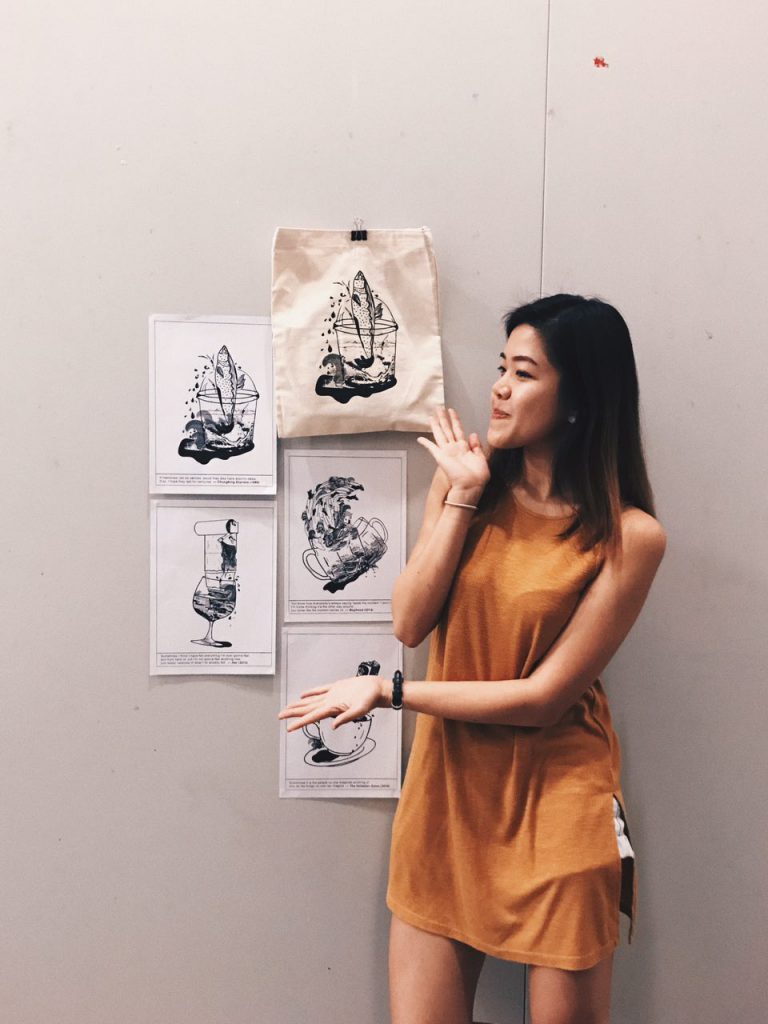 After critique thoughts: This project allowed me to explore alternative ways of putting together compositions and coming up with designs. Although it was challenging at the beginning, I eventually narrowed down my concept and it became easier to work from there. A challenge I faced was attempting to make the 4 compositions look consistent throughout and re-using the same elements in each of the composition.

I received overall good feedback after the critique and was very happy to receive such a good response from my classmates. I’m glad that my compositions were understood by others and was slightly relatable. On the whole, I am glad that my hard work has paid off and this project has been quite an experience for me! 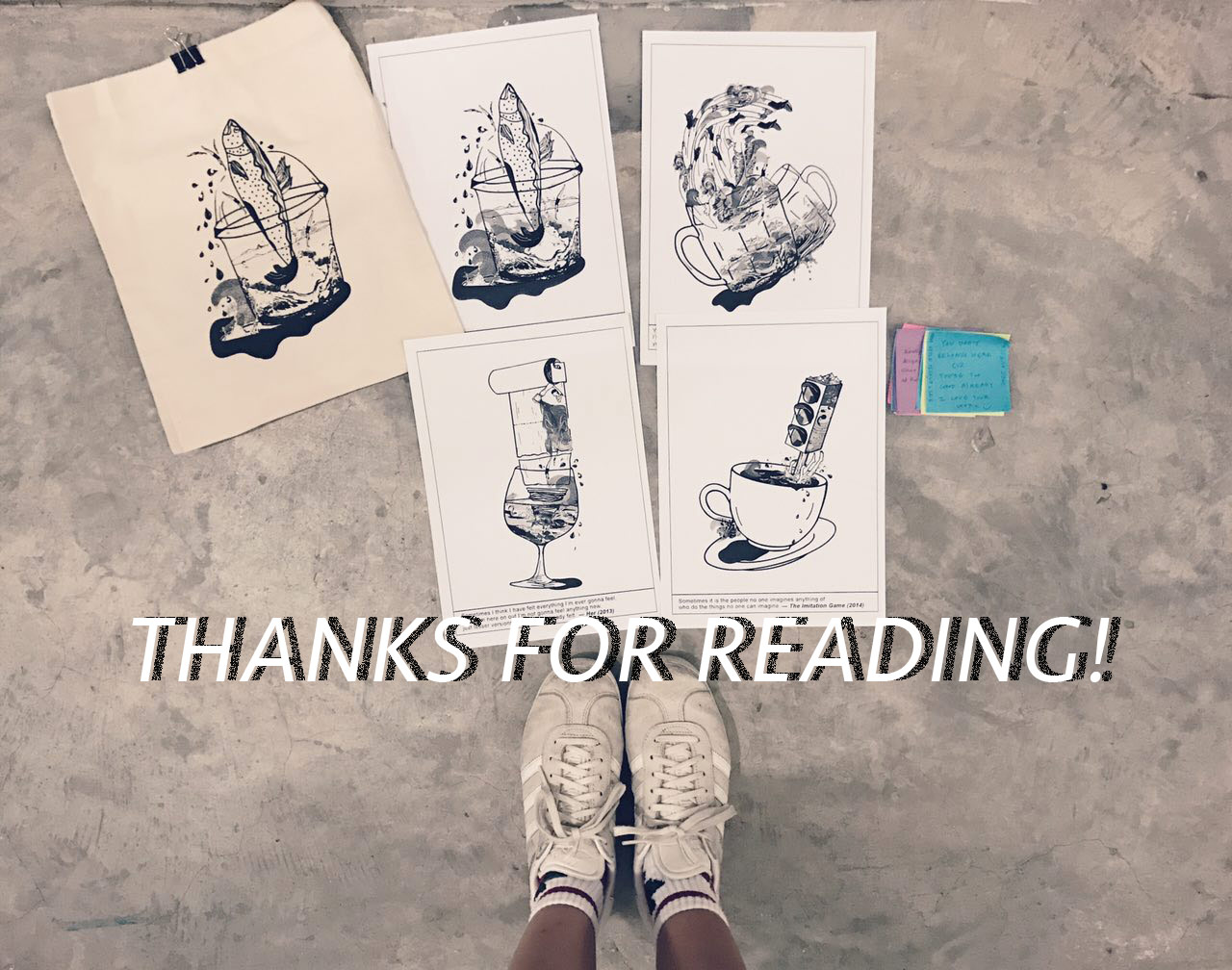