Starting the project off, I needed an overall concept to help me choose my four jobs. After thinking through several concepts including some like ‘things I will never be (e.g. mathematician)’ and ‘non-existent jobs’, I finally landed on the concept of the four elements: earth, water, air and fire.

So, after scanning through a million lists of jobs that have to do with each of the four elements, I finally decided on a Scarecrow (earth), a Helmsman (water), a Window Cleaner (air) and a Volcanologist (fire).

Moving on, thinking of a message that I wanted to bring across through these compositions, the first thing that popped in my mind was: “You suck!”. Well not really, but I thought of how humorous it would be to explore the ways that I could potentially mess up these jobs.

So, here are four ways of which I may potentially mess up my job in the future: 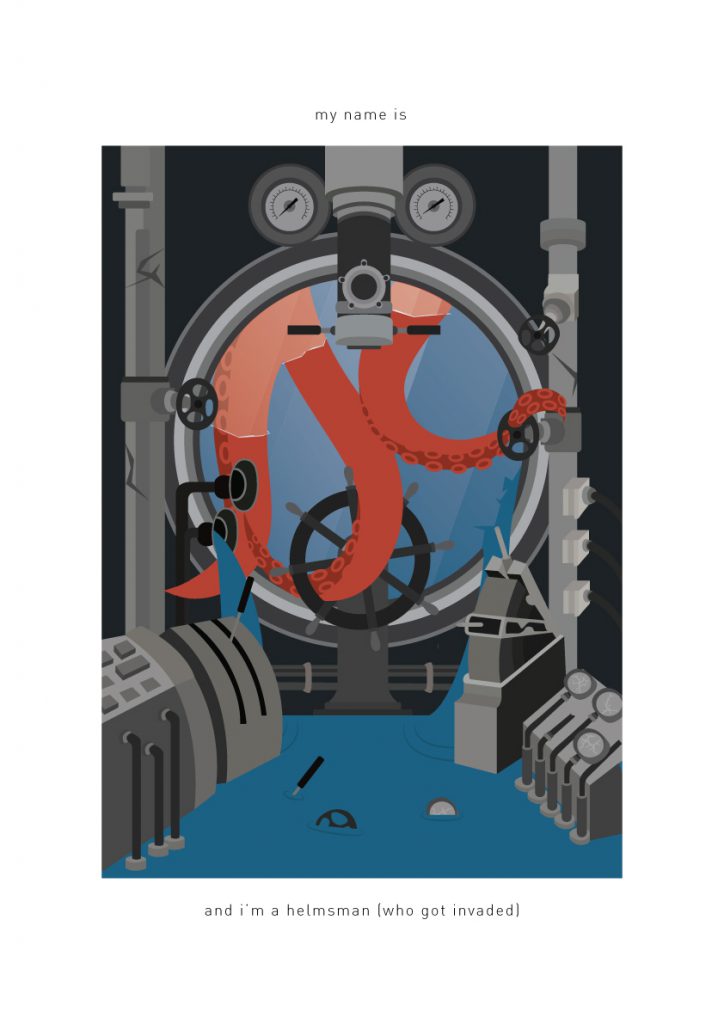 I was inspired by the many octopus illustrations on Pinterest, and figured that if I were to ever encounter a huge octopus I would, in fact, freak out. I seem to not like things with too many legs (e.g. centipedes) or no legs at all (maggots). While an octopus only has 8 compared to a centipede, you still have to consider that it’s huge, strong, slimy, and can attack you with its suction cups.

I wanted this to be an illustration full of detail, as I seem to find the feeling of fitting in many details very satisfying, as opposed to a minimalist style (that I also like). The excessive detail of the submarine’s mechanisms, water coming in, cracks and invading octopus is to give the feeling of how I would feel like in that situation of driving a submarine: overcrowded with too many things to handle.

Finally, the octopus’ tentacles that are coming through the window and taking over my job as the helmsman are used to form the letter forms ‘D’ and ‘C’ that are my initials. I decided to play on colour, where the red of the octopus can stand out from the monochrome submarine interior, so that a viewer’s attraction is largely drawn to the letter forms (also in the centre) first. 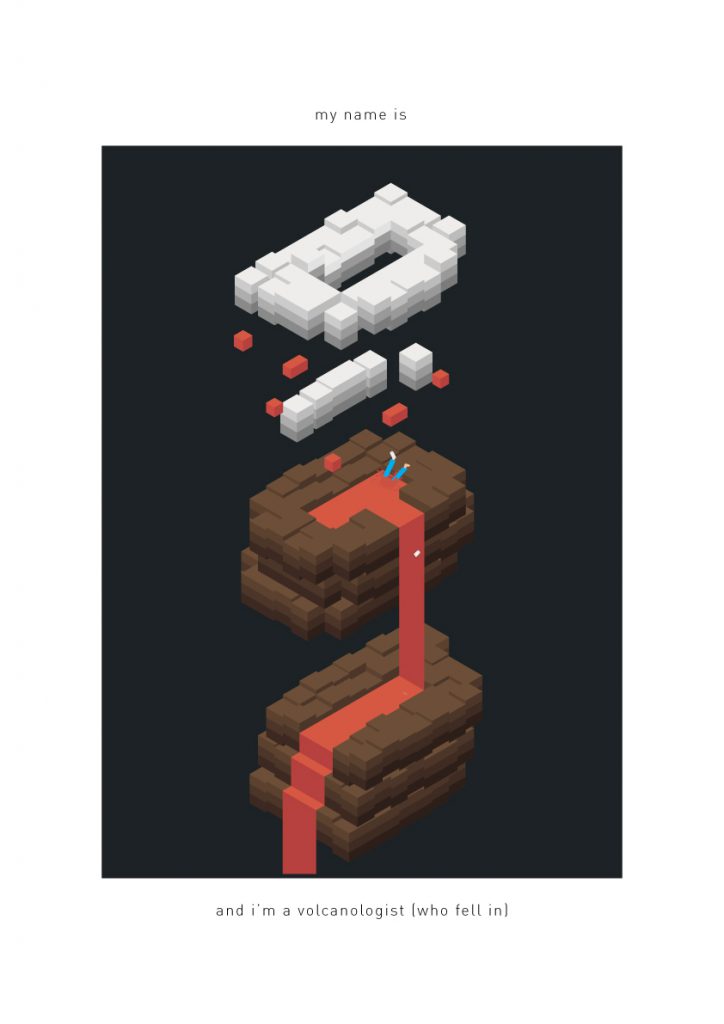 I saw many illustrations and tutorials on the isometric style, and decided to give it a go. I somehow ended up with an isometric style that uses repeated cuboids, much like pixels, or the game Minecraft.

After exploring severals ways of how I could explore a job on individual letters, I decided to use my full first name as I felt that an individual letter’s isometric space did not allow for much storytelling. This composition is probably also the most different one out of the four, as instead of using the elements to form a letter (e.g. tentacles to form ‘DC’), I went with designing the element from the letters.

Here, I used the letters in my name to form a volcano that is inducing smoke/clouds. I decided to go with an ‘abstract’ form of designing the volcano, such that while the volcano does not actually look like a proper-shaped volcano, the colours and placements of specific attributes (i.e. lava, clouds) help to tell viewers that this is in fact, a volcano.

The clouds are coloured white unlike the brown volcano, and the ‘D’ is to show kind of like a ‘halo cloud’ of smoke except that it’s not rounded all the way, while the ‘i’ are the rising smoke clouds. I used the lava to indicate the gaps within the ‘o’ and ‘n’ letters.

Finally, there is a tiny me that has fallen into the lava pool on the ‘o’, where you can see that I’m not even wearing proper volcanologist gear. I’m just in blue pants, playing on complementary colours to orange so that viewers will be able to see the tiny me very clearly, as well as my usual three-strap velcro shoes that I have brought back from my previous project. One of my shoes has even fallen off, to give the distinction between falling in vs. actually diving in on purpose. 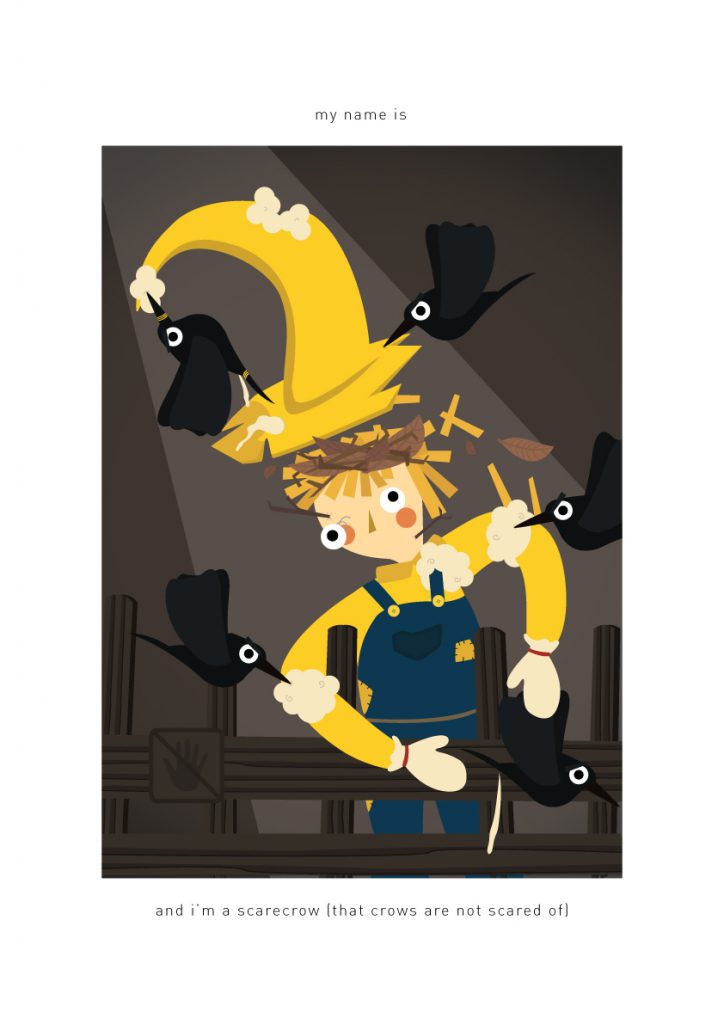 Now comes the scarecrow, that isn’t so scary. After the first two compositions, I wanted to attempt one where the letter forms were not so obvious to the viewer.

Here, the attack of the crows are what affects the scarecrow’s stance to then form the letters ‘D’ and ‘C’. The scarecrow was initially dressed in one full colour, but I decided to change its outfit for easier identification of the letters. The yellow parts of the outfit are hence the parts forming the letters.

Letter D: The hat is being pulled by the ‘leader’ crow, marked by the yellow stripes on its beak and tail. The pull causes the hat to form the bend/curve of the ‘D’, while the crow itself helps to complete the ‘D’. The yellow stripes are to help viewers understand that the crow is still part of the letter, since I am playing on colour.

Letter C: Simple enough, the pecking of the crows have caused the scarecrow’s arms to break, thus forming a ‘C’. To further add humour, the broken arms are sort of trying to catch one of the crows who manages to get away, while leaving its mark behind… At least I managed to scare one crow.

I initially tried to place the scarecrow in a field of dead crops, but decided against the design as it was too distracting (process may be viewed later on in the post). Thinking of what background to give to the composition, I then decided to bring back one of the jokes from my previous project, where I designed myself to be an exhibition with a ‘do not touch’ sign (that gets touched anyway), because I dislike people touching me.

So, the diagonal spotlight helps to bring attention to the letter forms that are also placed diagonally, and the brought back ‘do not touch’ sign has been left out in the dark while I get attacked by the crows. 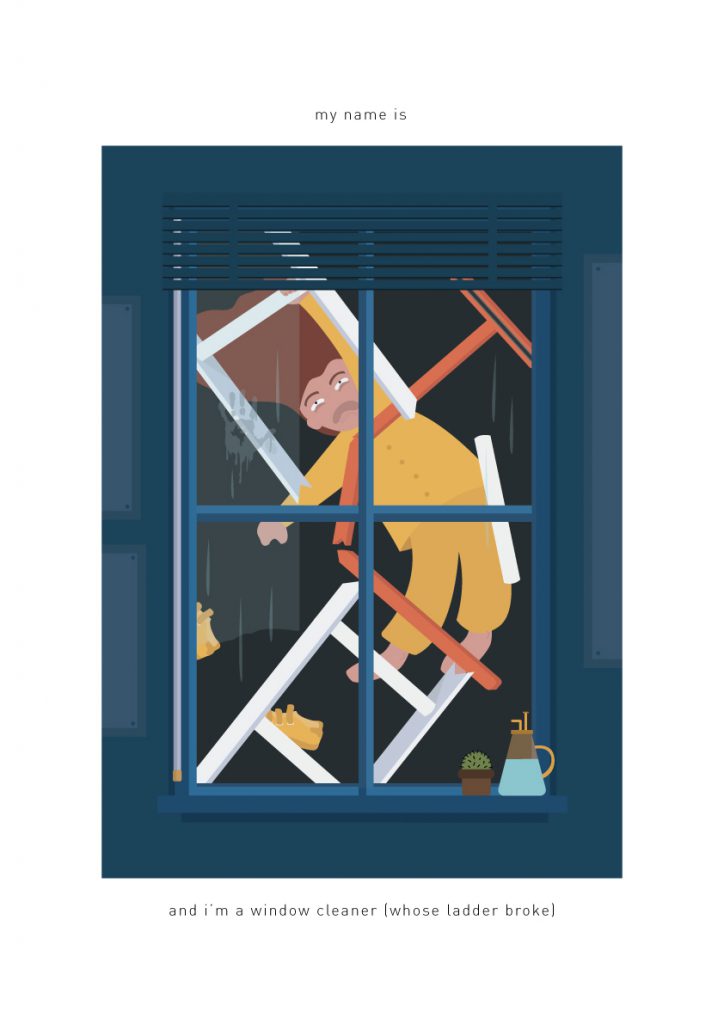 Similar to the scarecrow, I wanted the composition to show the letter forms in a non-obvious manner, while still being able to be identified once taking a closer look.

I feel as though my progress can be seen through the compositions, as in contrast to the first one where the tentacles are one element forming both letter forms, I have now progressed to using different elements to form the letters.

I wanted this piece to be slightly more minimal than the first, just to explore different ways of illustrating. However, while being minimal, I still wanted there to be drama so as to bring out the message of me messing up my jobs and thus the composition may not be considered ‘minimalist’, but it is still in a way ‘cleaner’ than the submarine.

The letter ‘D’ is formed by three things: The white broken ladder, myself hanging on for dear life as well as the interior’s window blinds lifter string… thing.The letter was initially only formed by the broken ladder. However, taking note of the curve in the ‘D’, I decided to change the way my body was positioned, which also helped with increasing dramatisation in the composition. However (again), since my body is yellow and the ladder is white, the ‘D’ still wasn’t so clear and so I added the blinds lifter on the inside to help complete the letter.

The ‘C’ is simply formed by my long, broken squeegee and is coloured orange, making it stand out clearer as a letter form.

Finally, I wanted there to be some humorous ‘contrast’ between the interior and exterior for dramatisation: While it’s all calm on the inside with the very in-place posters, blinds and succulent, right outside the window is all chaos. I added a half-wipe to show how I was cleaning the window halfway, as well as a ‘realistic’ handprint, in contrast to my ‘cartoonish’ hand, to show how I had smacked on the window before falling away.

The majority of my initial conceptualisation can be found in my visual journal, while I will build on how my final compositions came about in this post.

Starting off the project early, I did not have a message in mind that I wanted to convey through my compositions as I thought that the only point was to show the type. Thus, the initial drafts did not show any sign of myself messing up the jobs.

Here on, I will go through the process of each composition that eventually led to the final:

The initial draft of forming the letter forms by the tentacles, along with a minimalist plan: 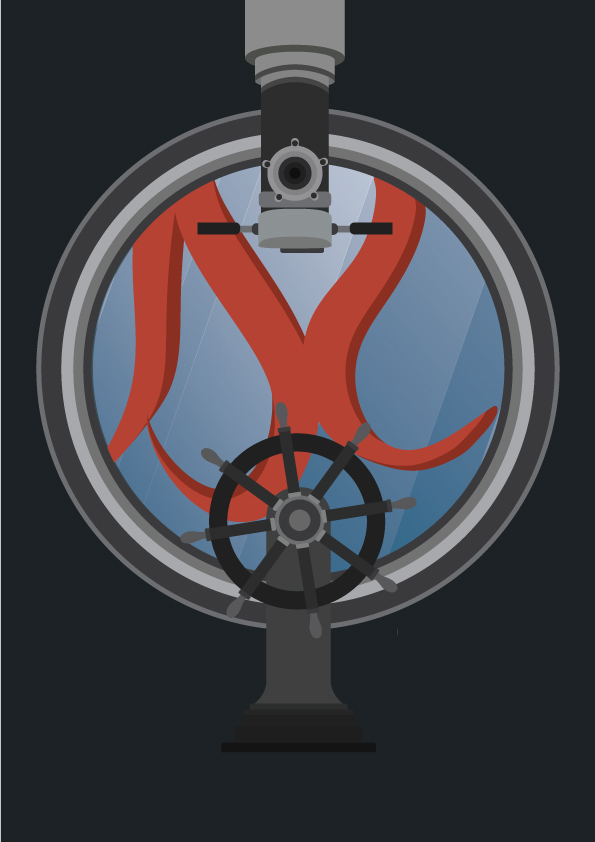 I then decided that I did not want to go with minimalism but rather a composition full of detail. This was also when I realised the need for a message: 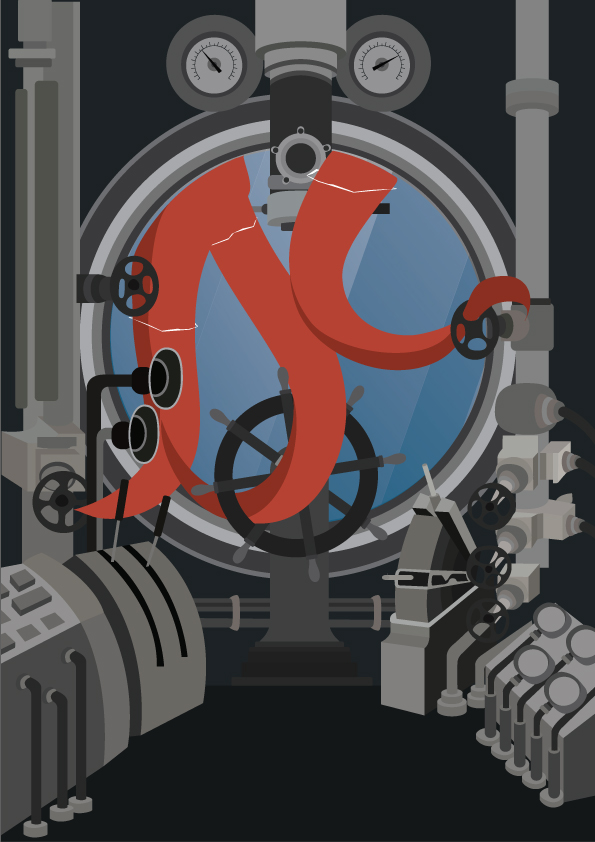 While I do (still) like the overcrowding mechanisms, I received feedback from some of my peers that it may have been too much. I hence reduced several details such as the wheels, and instead added more details that enhanced the narrative of messing up the job (i.e. cracks, flood, etc.), eventually ending up with my final piece.

I came across many isometric illustrations on Pinterest, with Ranganath Krishnamani’s Alphabet City catching my eyes the most. 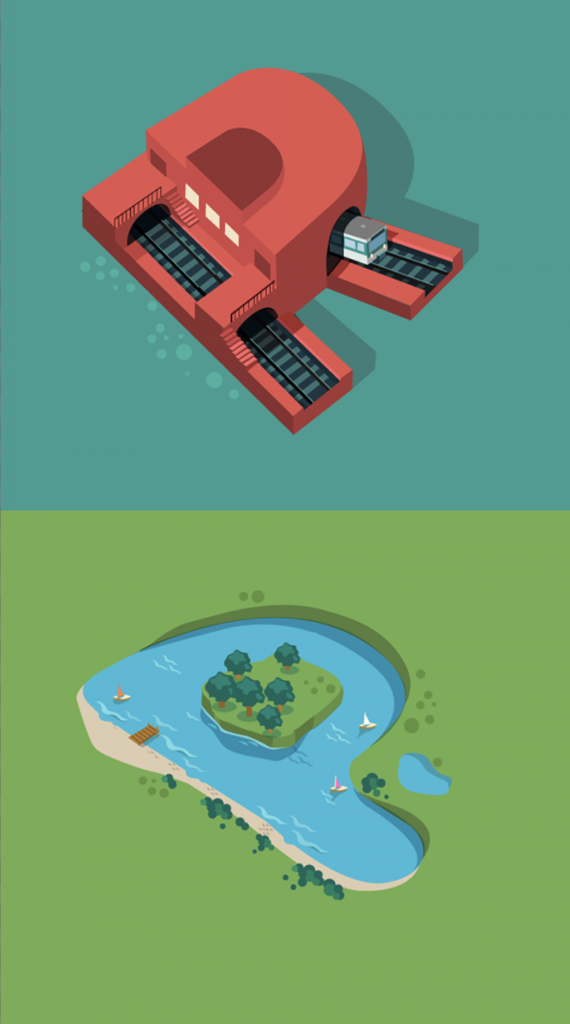 I then proceeded to explore the ways that I could perhaps form my name in the isometric style, without having a particular job in mind: 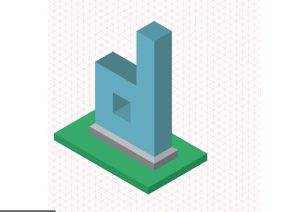 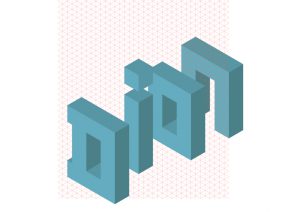 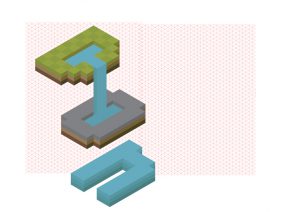 Hence, from there, some way, some how, I managed to come up with the idea of using the letter forms to instead BUILD the volcano. 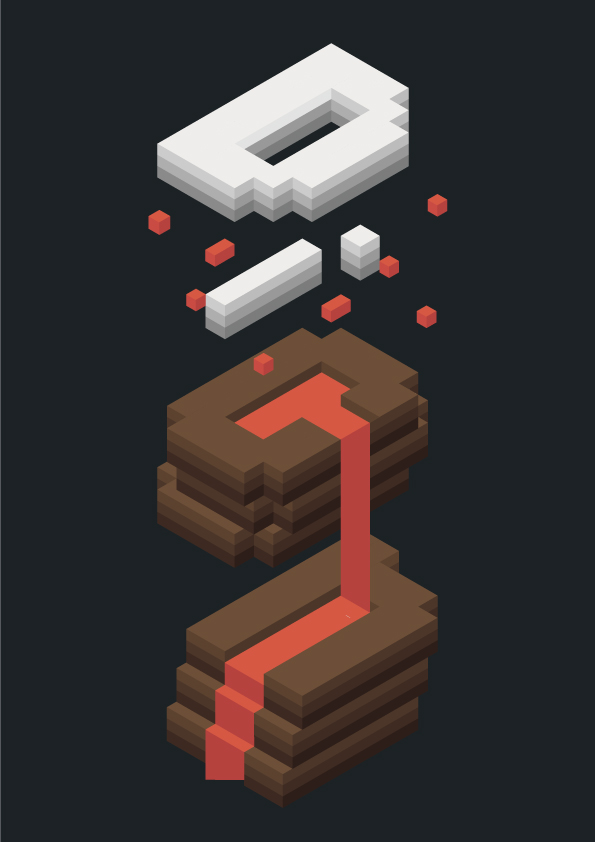 Seeing that it the forms were very flat, I decided to play around with the cuboids’ levels for more depth within the composition. I also added a thermometer to show that I’m ‘studying’ the volcano – again, this was before I realised the need to convey a message. After this I realised the need for a message, hence I added the image of myself falling into the lava. I also played more with the levels of the volcano to match up with the clouds.

This was an image found on Pinterest that I decided to use as inspiration. 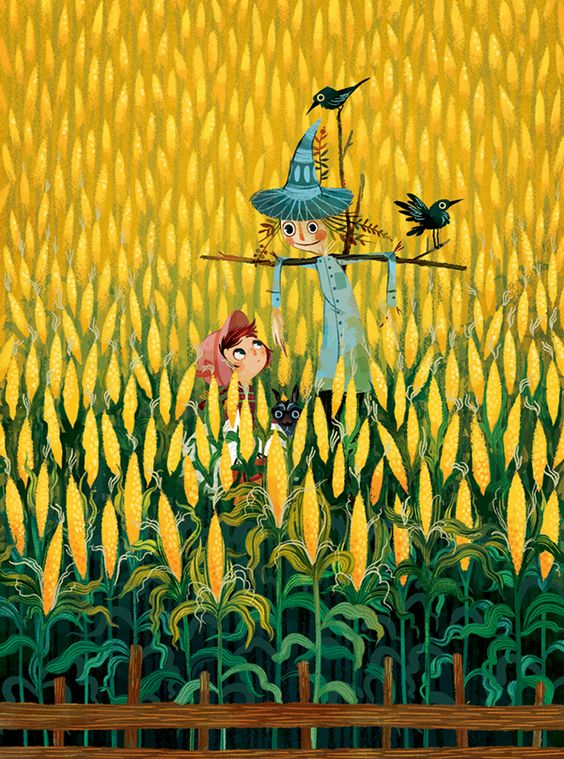 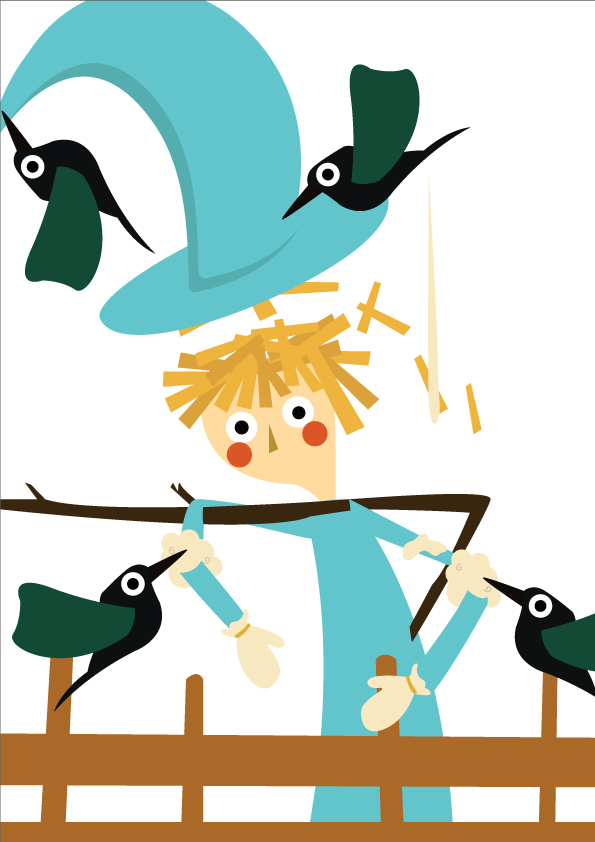 As mentioned above, this was where I tried to incorporate a dead farm in the background, which came across as too distracting. 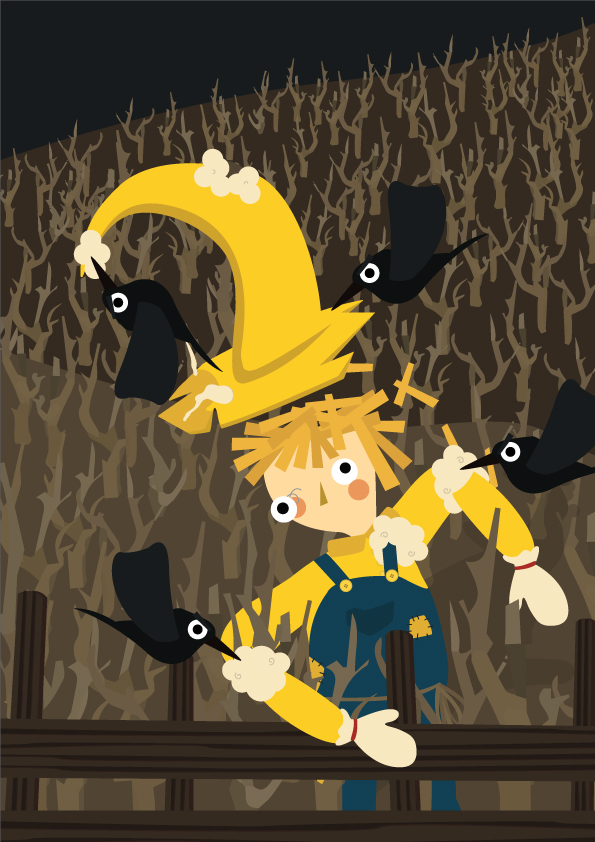 Originally, before I realised the need for a message, I wanted to go with another isometric composition where the windows formed the letters D and C. 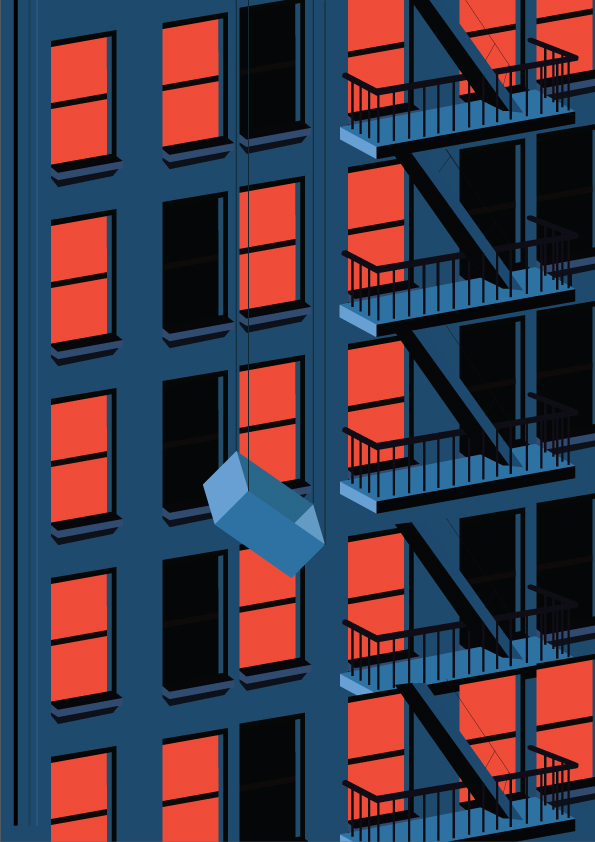 Trying to stick to this concept, I tried to add the message of messing up the job by adding dirt and cracks to the windows, but none of them looked appealing. I also thought of illustrating opened windows with heads popped out (in the forms D and C) to look at ‘me’ who’s fallen off the gondola, but thought that it was too much to do. I hence decided to scrap this idea and come up with something completely original, ending up with my final composition 🙂

Here’s some of the other random ideas I came up with at the very start of the project, before I even chose my jobs. I just wanted to explore with vectors, letter forms and potential ideas! 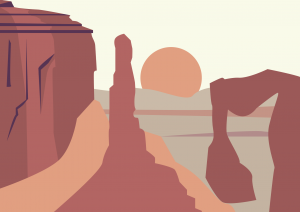 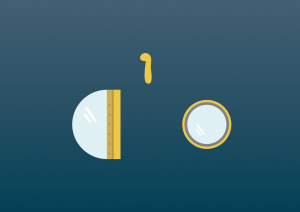 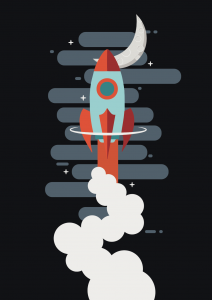 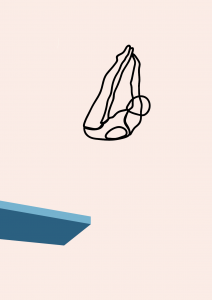 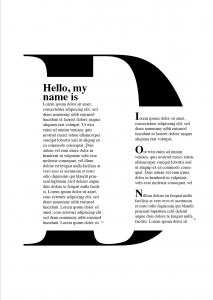 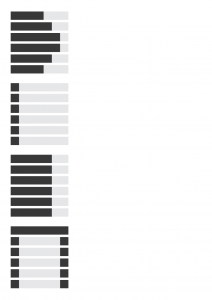 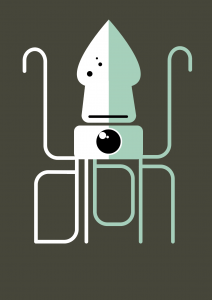 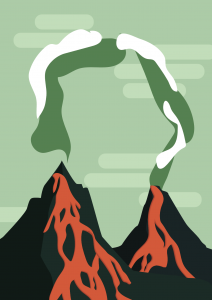 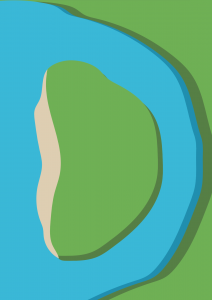 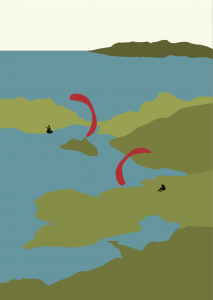