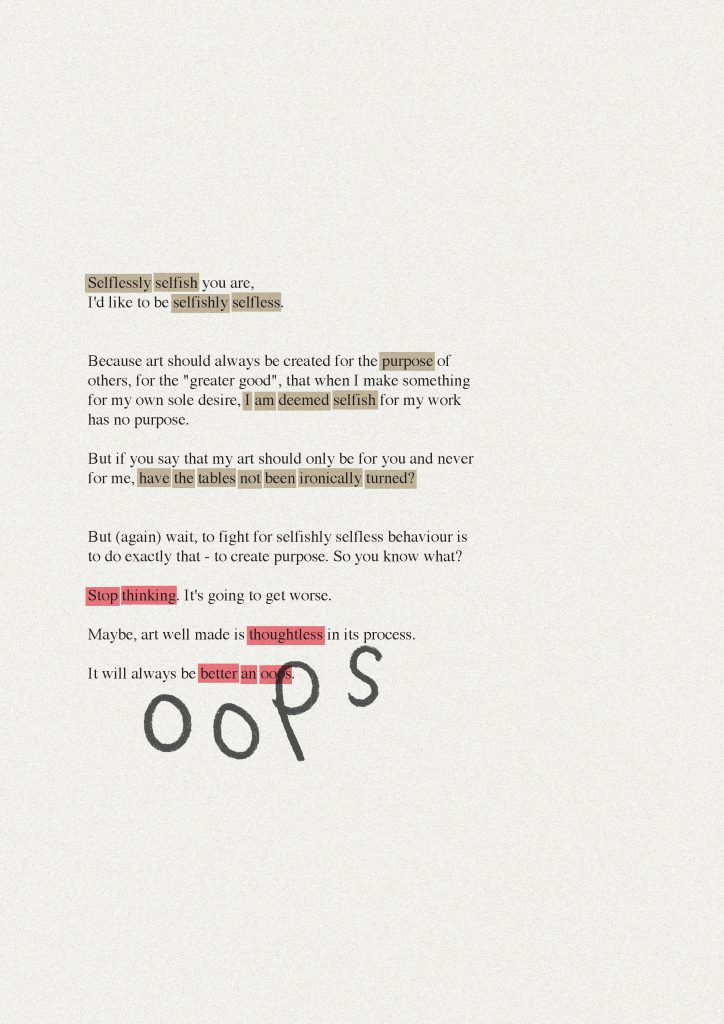 Selflessly selfish you are, I’d like to be selfishly selfless. Because art should always be created for the purpose of others, for the “greater good”, that when I make something for my own sole desire, I am deemed selfish for my work has no purpose. But if you say that my art should only be for you and never for me, have the tables not been ironically turned?

But to fight for selfishly selfless behaviour is to do exactly that – to create purpose. So you know what? Stop thinking. It’s going to get worse.

Maybe, art well made is thoughtless in its process.

It will always be better an oops.

I refer to several art movements that no matter how unintentionally purposeful you may think they were made to be, all served a purpose one way or another.

Art Deco was purposeful, aiming to infuse functional objects with artistic touches. De Stijl was purposeful, in attempt to remake society in its aftermath of WWI, for a greater world. Dada questioned purpose as its purpose, focusing on crafting aesthetically pleasing objects that generated difficult questions about society, the role of the artist and the purpose of art. The Bauhaus obviously aimed to reunite creativity and manufacturing for its fear about art’s loss of purpose in society. The Art Noveau sought to revive good workmanship. Even Minimalism, you would think was about not being concerned about what others think of as “art”, ironically creates works that purposefully and radically eschew conventional aesthetic appeal.

So, is purpose, especially for the benefit of the public, what defines good art?

I then refer to this excerpt of an article by typographer Paula Scher, which pretty much speaks for itself:

And after thinking so much into this, I came to realise: We often beat ourselves up for not being able to come up with the most top-notch ideas, but sometimes, things that are created by chance without a care in the world, could mean so much more than those that have been crafted for long hours with its core focused on pleasing everyone’s expectations (and even when we’re trying to go against expectations, we ironically end up coming back full circle anyway!). Basically saying the more you think, the worse it gets.

So maybe, in a similar concept to Beatrice Warde’s “type well used is invisible as type”, art well made is thoughtless in its process.

Although, already translated into text above. 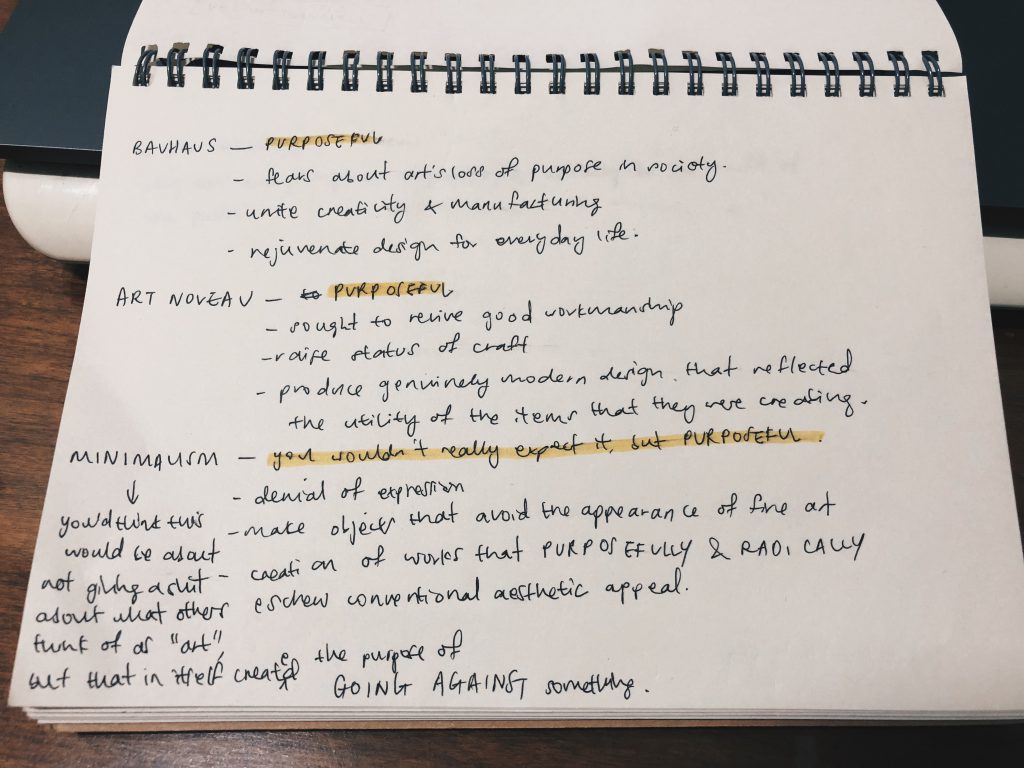 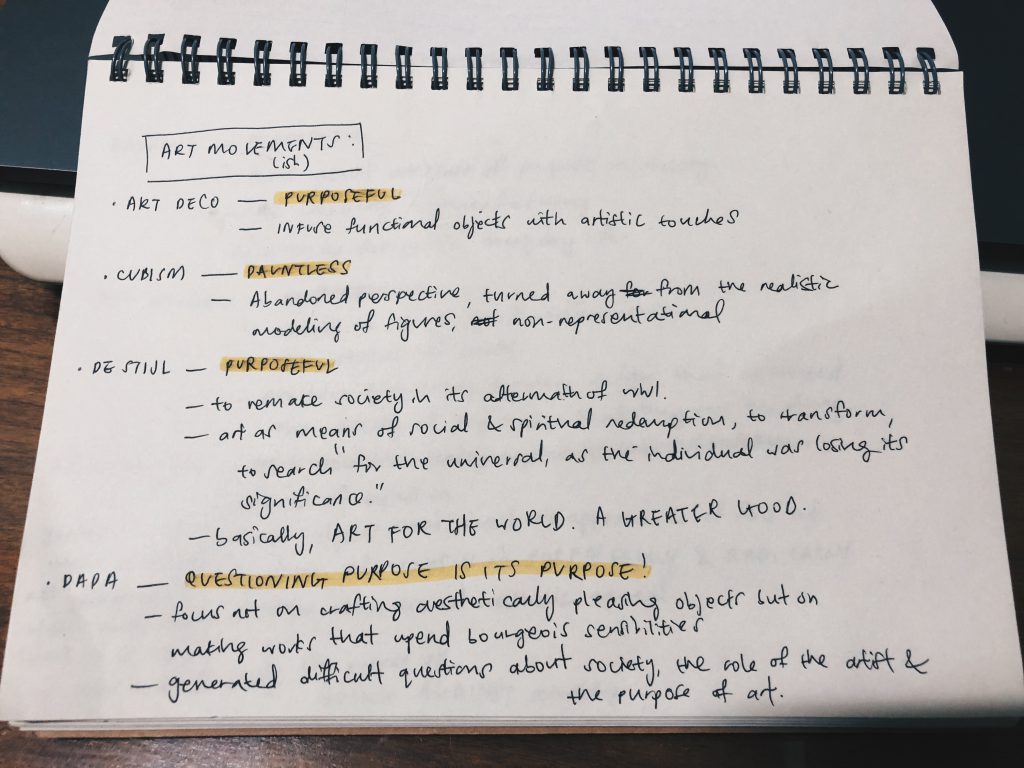 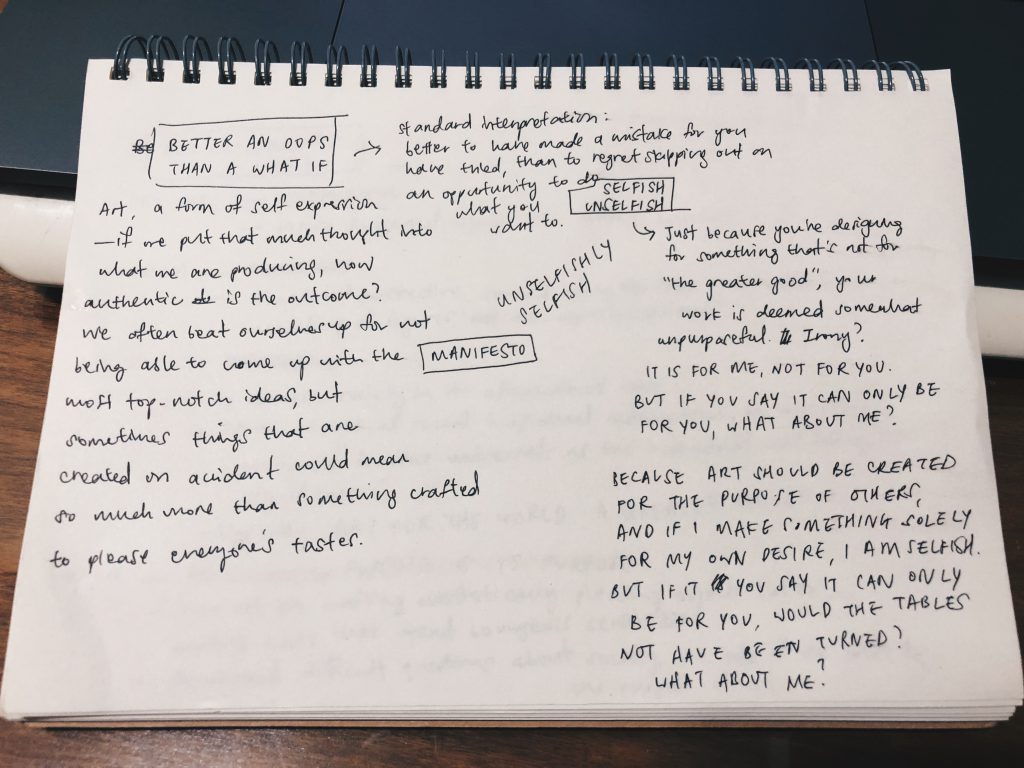