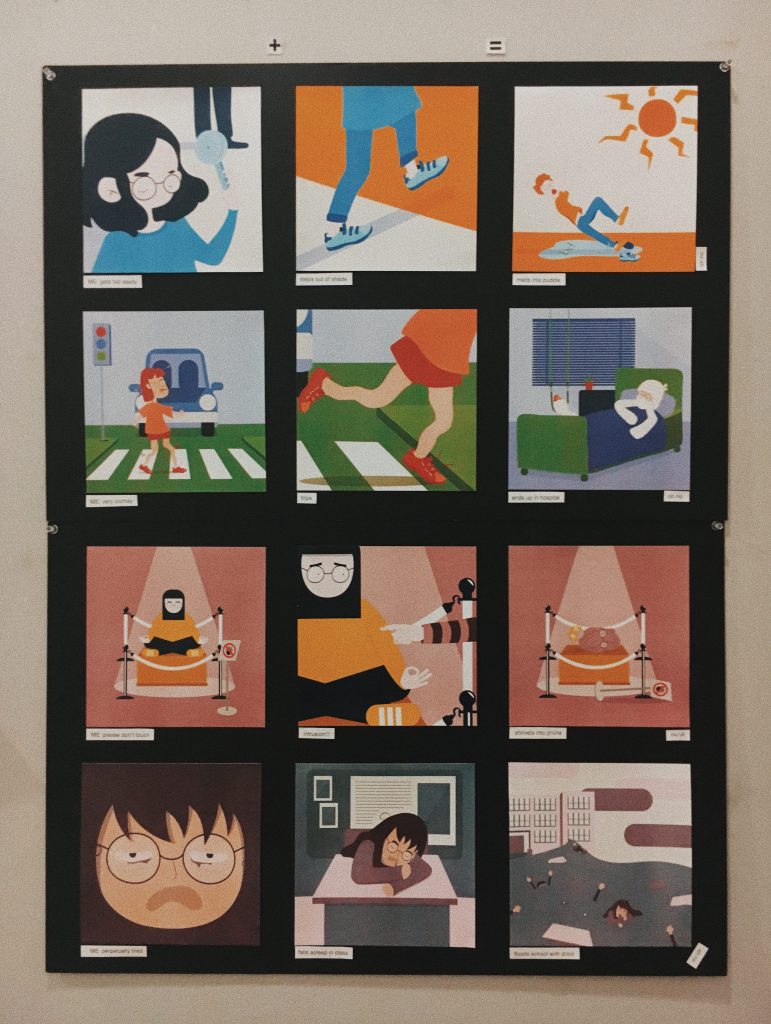 ART STYLE:
I made a wise decision to go with what I’m comfortable with for this final project, that is, digital illustration. However, as a challenge for myself, the final style that I have gone for for this project is a full vector illustration style with NO outlines, as I am usually only comfortable with outlined illustrations.

I had no limitations to the type of colours I use (e.g. only pastel) apart from using different colour harmonies so as to allow freedom in exploration of colours. Through this project, I also allowed myself to explore different ways of graphic illustration, while still having all the compositions be able to tie in together as one in the end.

There was also an overall attempt at exploring different shot sizes in every equation, to give better depth and understanding of the concepts.

CONCEPT:
The very first few ideas that came to my head happened to involve negative traits/feelings that I possess… and putting myself in situations, the outcome all happened to be self-destructive/comical. I’m not so sure why, but I went ahead with them anyway.

ME:
As I allowed myself the freedom of exploring illustration styles, I decided to attempt different ways of illustrating the main girl character present in every equation. To let the audience know that these ‘girls’ are all supposed to represent me, I added two key features to every girl – my round glasses and my three-strap velcro shoes.

To express the juxtaposition between hot and cold, I went with shades of the complementary colours blue and orange, that happen to also make logical sense such that blue represents cold and orange represents heat in general knowledge. 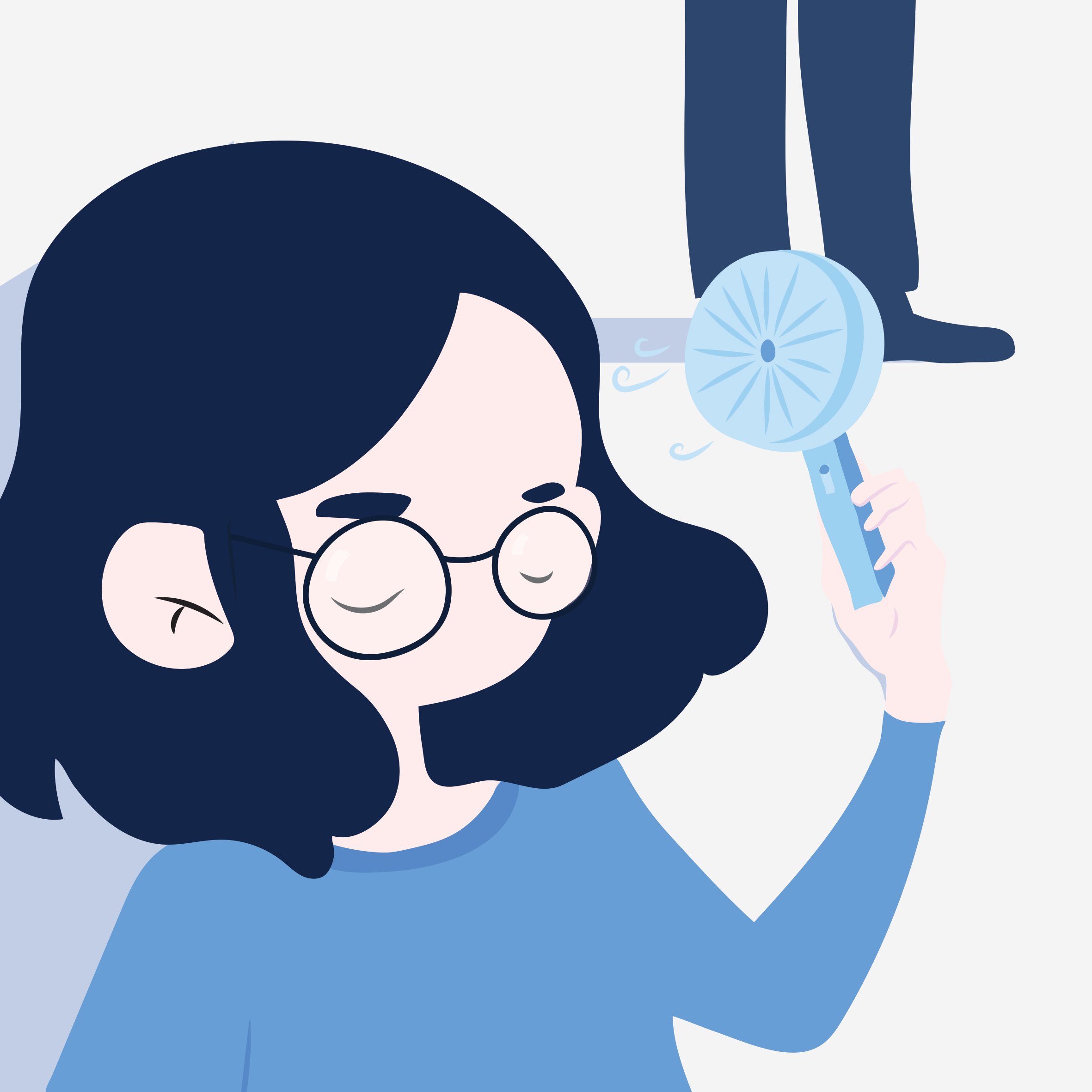 ME: gets hot easily

The main character, me, is drawn towards the front and left – allowing for depth and space for the addition of an extra presence (silhouette) behind. 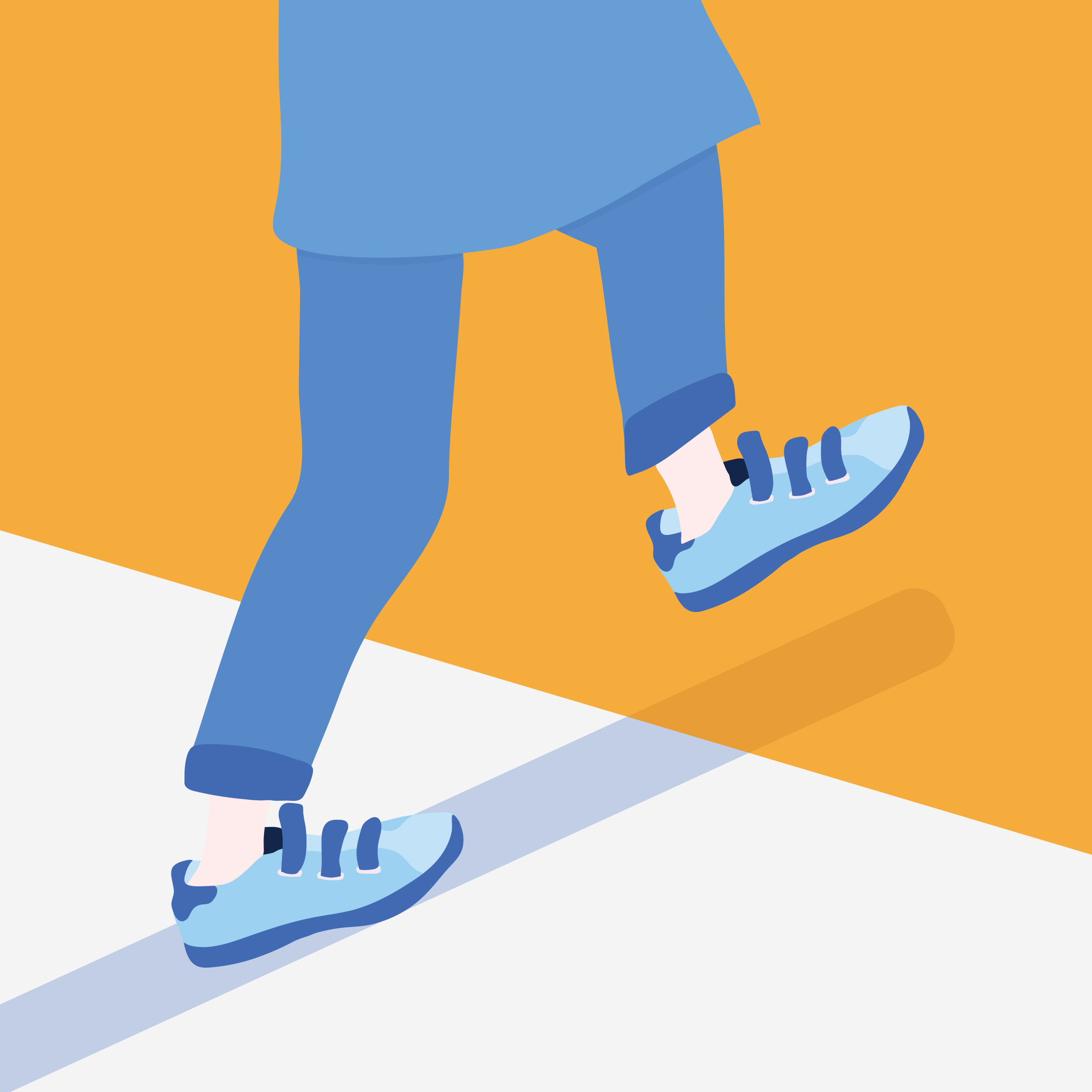 steps out of shade

While the ‘shade’ here is not represented by a dark colour, the cool tone in comparison to the bright orange suggests that it is, a cooler place than being under the sun. The 1:2 composition of shade:sun gives the impression that the heat is overpowering. 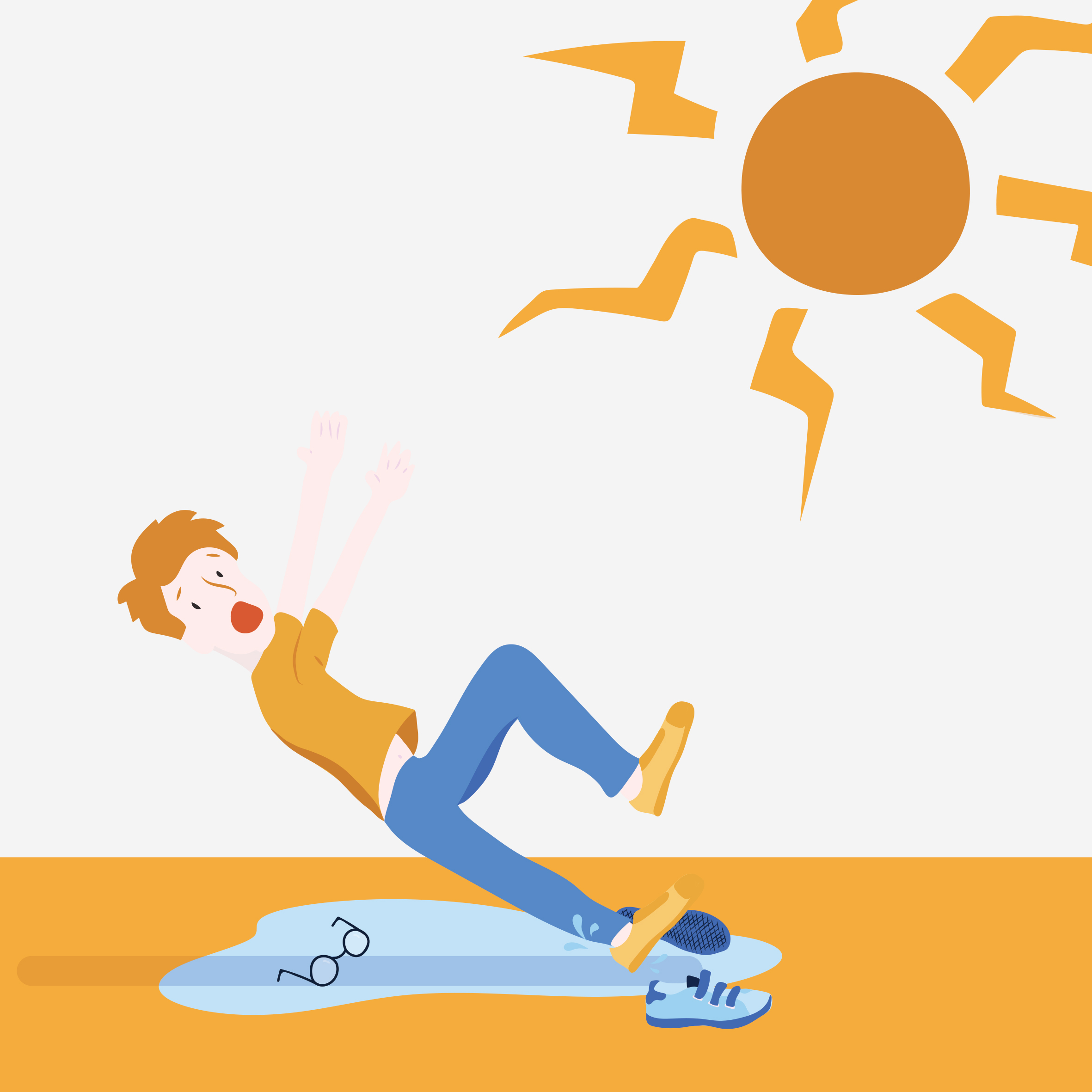 A wide shot, to give viewers understanding of the whole situation – that is, I stepped under the sun, melted into a puddle, and a passer-by has slipped over me. The puddle. What remains of me are my signature round glasses and velcro sneakers.

I decided on using the triadic colours of red-orange, blue-purple and green to separate the different elements present in the compositions.

I, personally, have always really disliked the three secondary colours for some reason, but… life is like that (I quote my friend who says this to me all the time), you can’t always stick to doing only what you like, so I decided on using these adjusted tones of the basic secondary colours so as to let myself explore the usage of these colours. 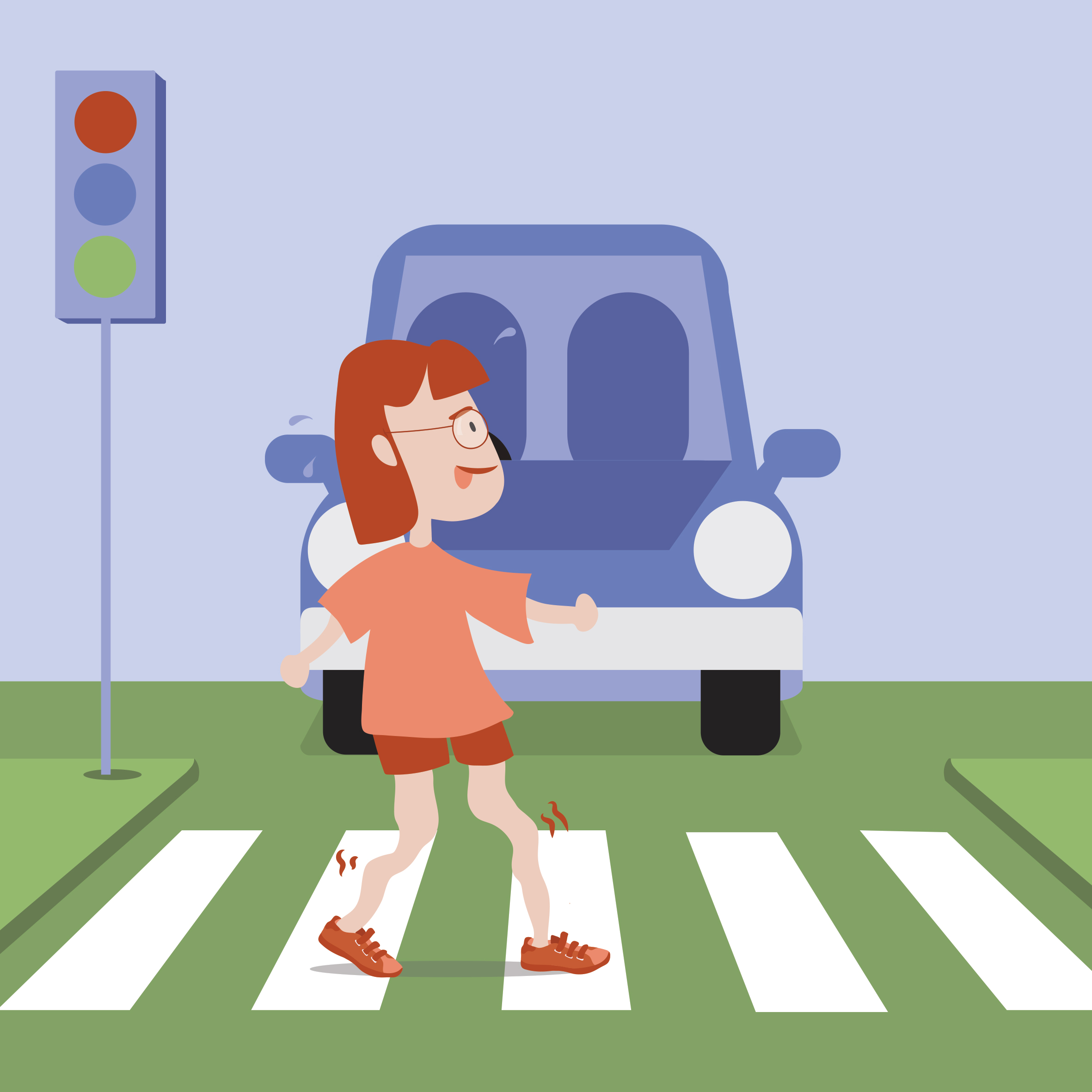 Here is I, with my very wobbly legs, crossing the road. What’s going to happen? 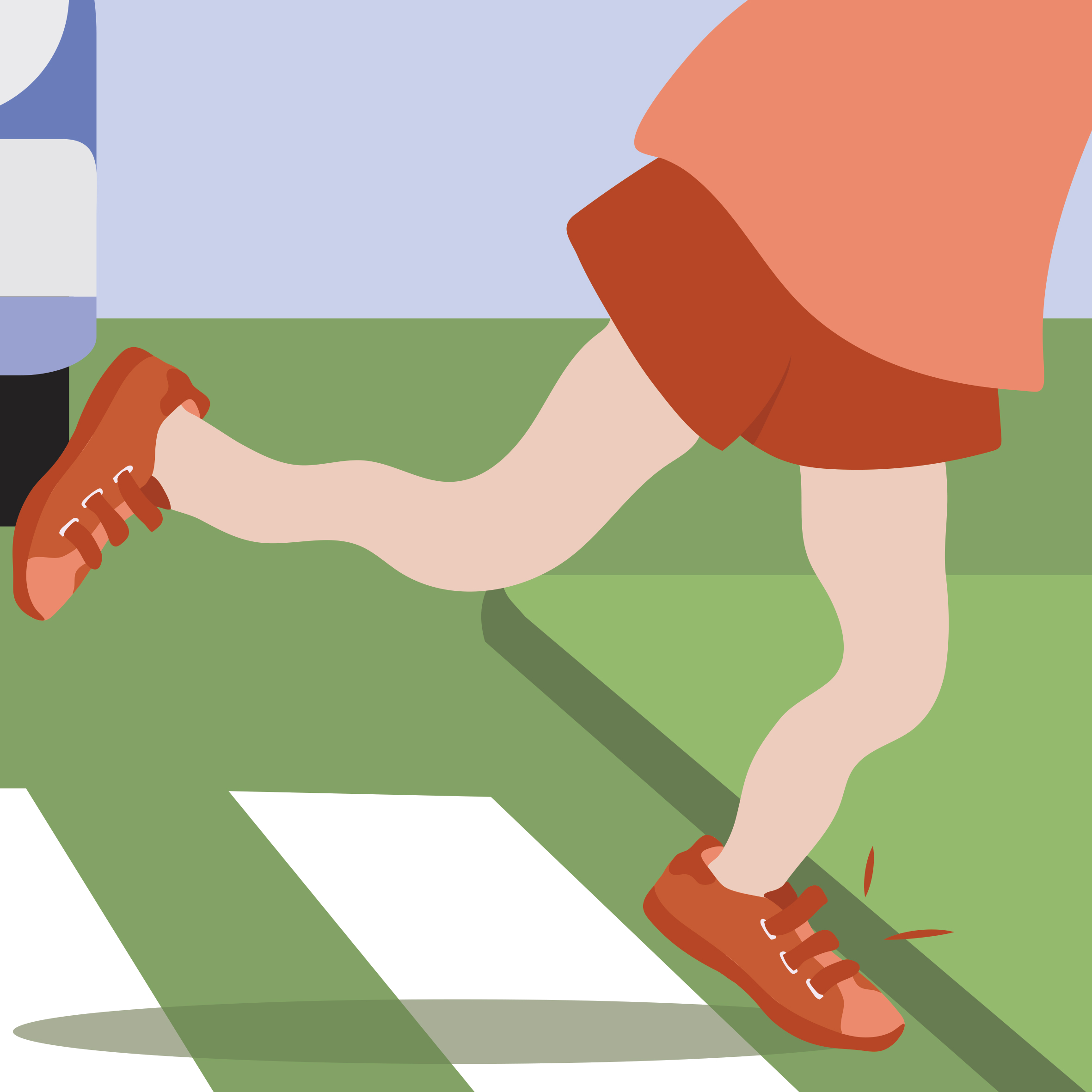 A close up frame to see what actually happens. As you can see, the car is still waiting in the back so no, I did not get into a car accident. I tripped.

I initially wanted to illustrate myself tripping over nothing on a flat surface, but visually, there was no depth and it would have been hard to understand without explanation. I then wanted to show that I tripped over myself (i.e. shoelaces), but I don’t have shoelaces. So… I guess, tripping over this little raised platform/curb will do. 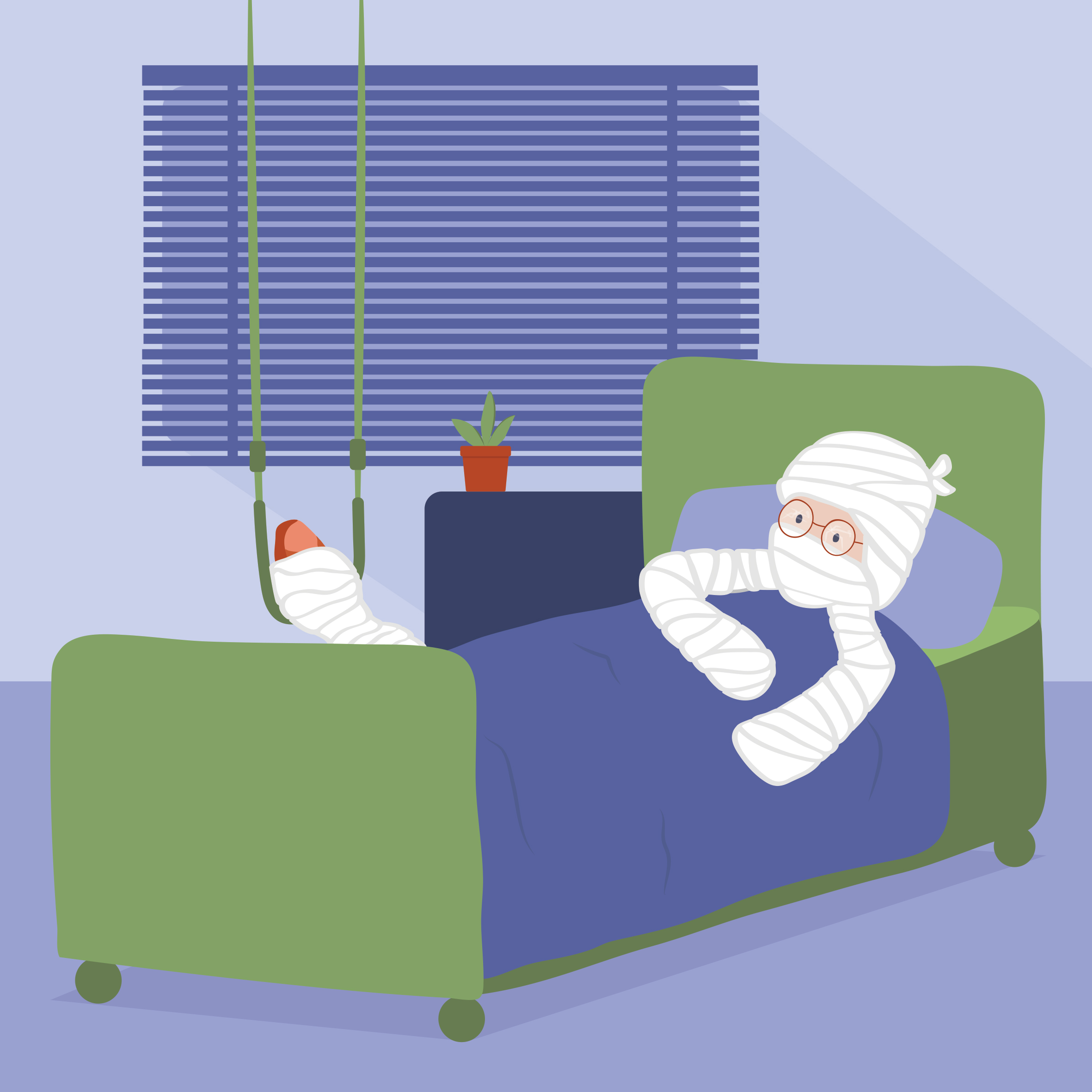 ends up in hospital

Pretty likely to happen one day.

The red tones are now only present in the flower pot, my shoe (that I am still wearing under my cast) and my round glasses – a comical way at signifying where ‘life’ still holds present.

I had initially planned for this to be a full complementary composition to separate the two elements – girl vs. environment. However, I decided to add a tinge of blue for depth, as well as to explore another colour harmony for this project, having already done complementary.

As a challenge for myself, I decided to attempt illustrating this equation with more geometric vectors rather than using the brush tool, as I normally do. As such, I felt that using the exact same illustration of my sneakers as I have in the other compositions would not fit the visuals. Improvising, I put three stripes on the shoes to imply that these are still the same, velcro strapped shoes of mine. 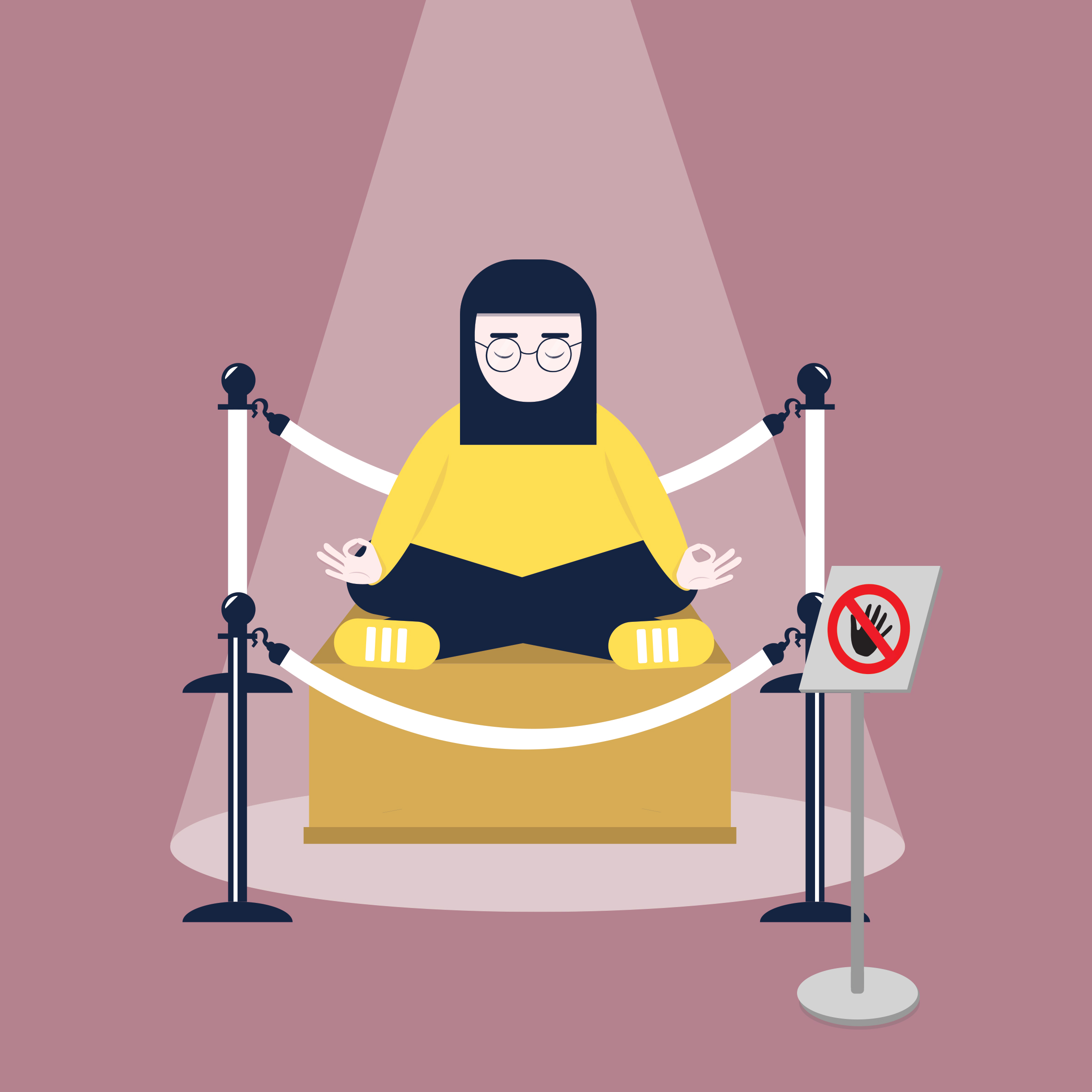 I like my personal space. The initial composition was just a mid-close-up shot of myself holding up a ‘DO NOT TOUCH’ sign, which I felt was not creative enough. So, I decided that I will be a meditating art installation at the museum, surrounded by barricades and a sign telling visitors not to touch.

The whole art installation is set in the middle of a wide shot, to emphasise the separation of the space within and outside the barricades. Within the barricades are the colours yellow and blue, while purple only exists outside.

Not to mention, yellow is also my favourite colour while I really dislike purple, so in that context, I am using yellow to signify that I am in my own, comfortable (meditating!), personal space, in the midst of all the purple. 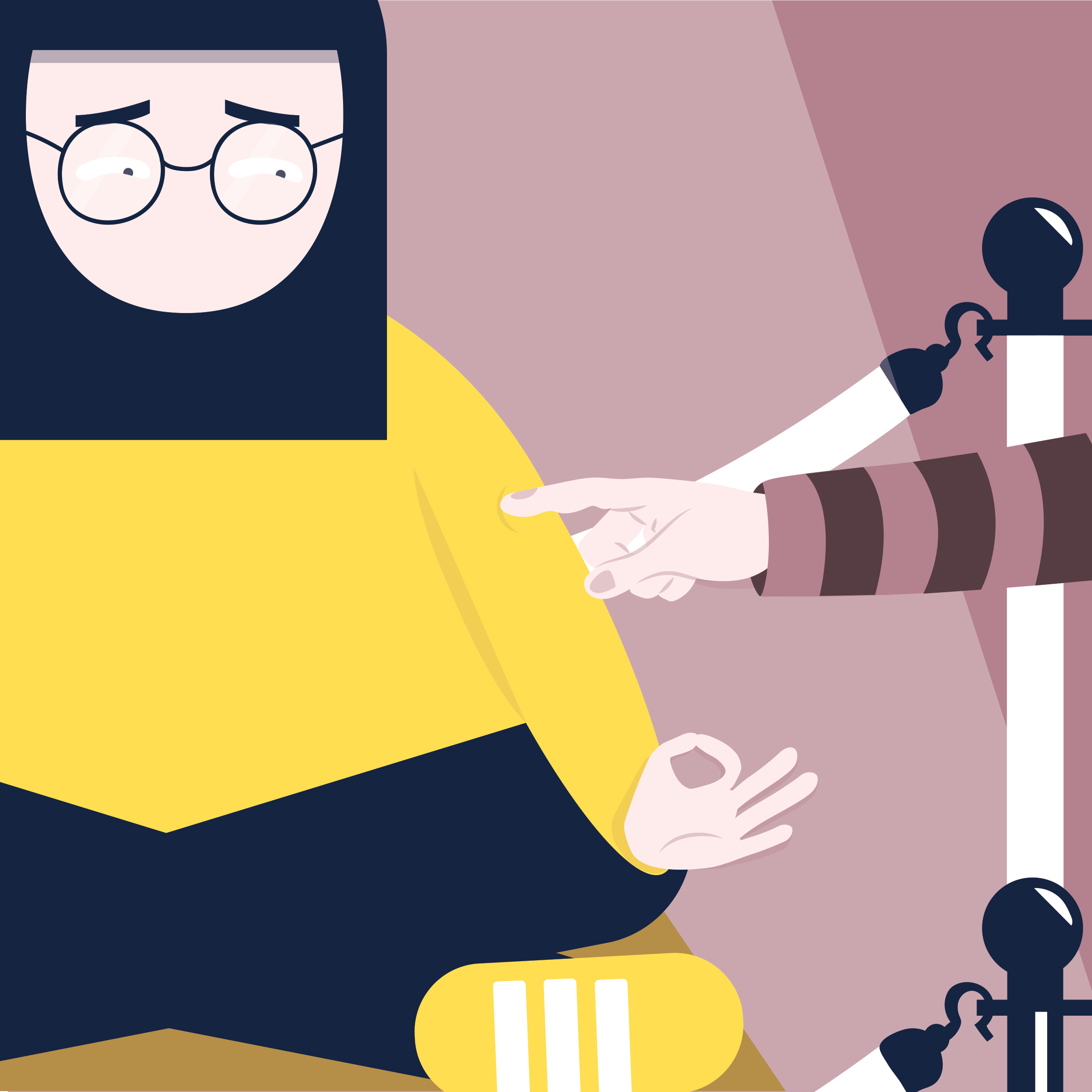 A purple-covered hand has come to INTRUDE MY PERSONAL SPACE. Stripes of purple shades are used to decorate the hand’s sleeve to emphasise the jarring intrusion.

I remain meditating, because I am, after all, an art installation that should not be moving… 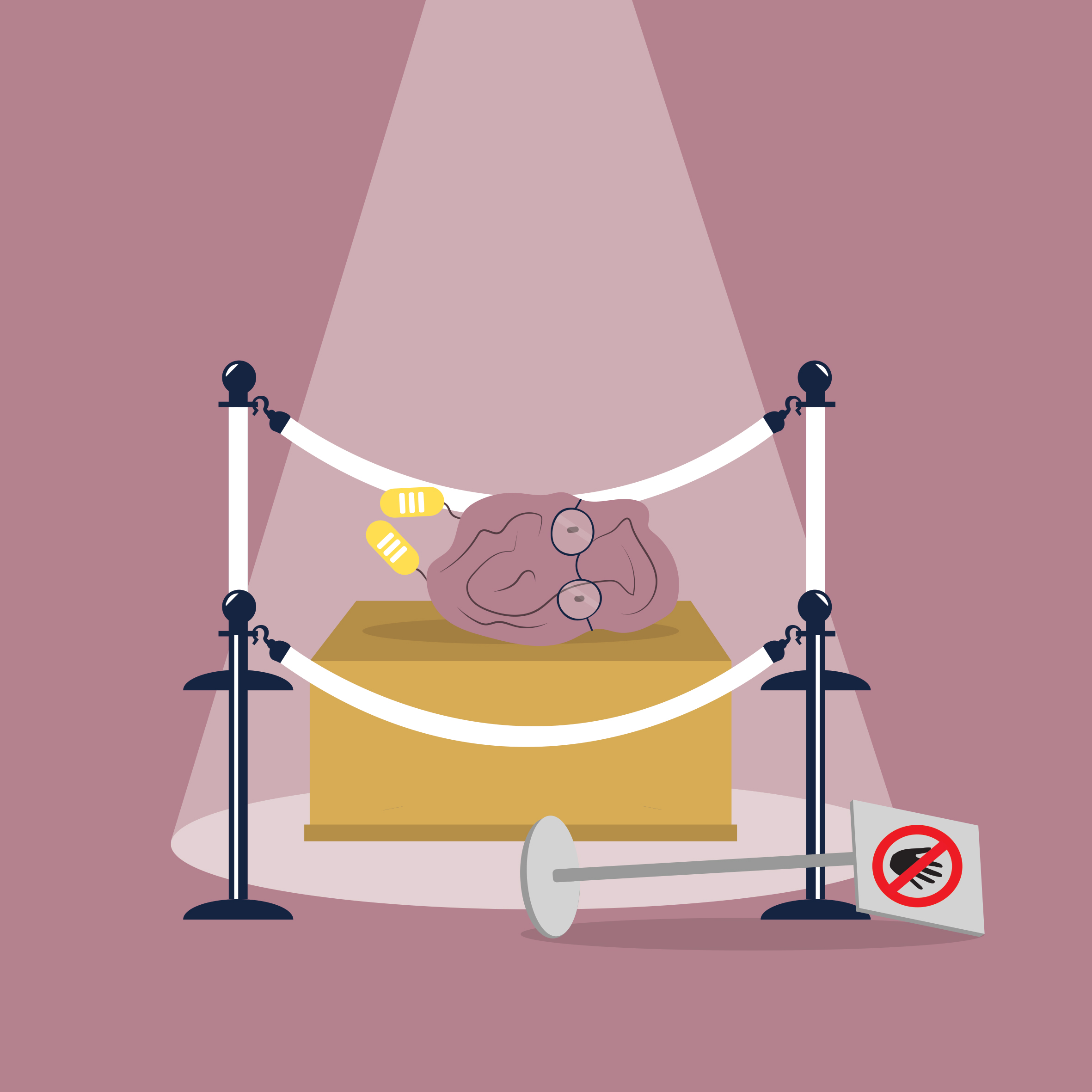 To heavily emphasise on how much I shrivel up when my personal space is intruded, I decided to transform myself into a prune. Again, what remains are my shoes and round glasses, so viewers know that the prune is me.

The sign has fallen over, because it no longer matters. My space has already been intruded. I am no longer meditating because… Well, I don’t really have to say it.

P.S. This was where the real inspiration came from: 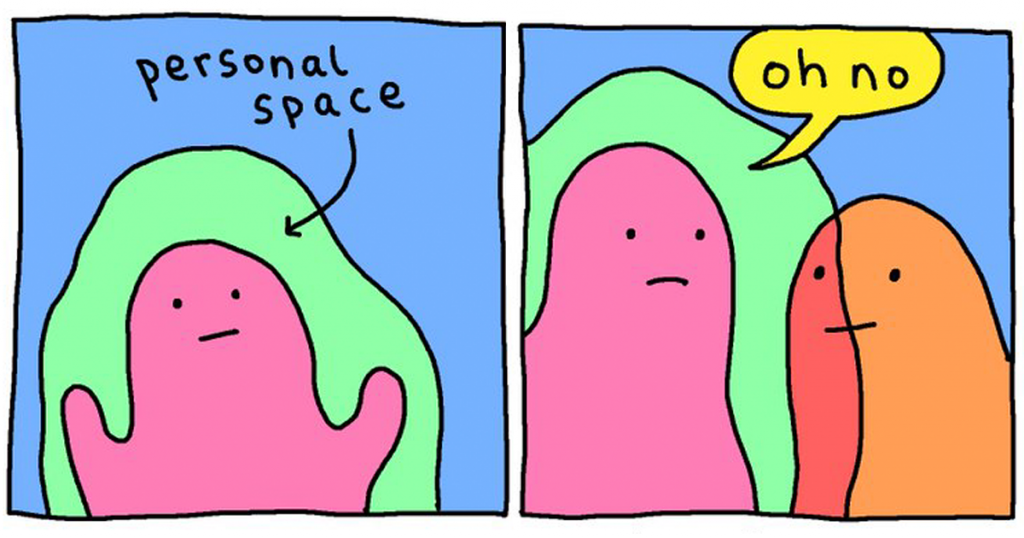 With the concept of this equation being tire, I felt that the use of a muted, monochromatic colour scheme would fit well with the ‘dull’ mood.

Finally, the last equation! This panel shows the development of my entire project, where the art style is a combination of what I have explored – organic and geometric vectors. 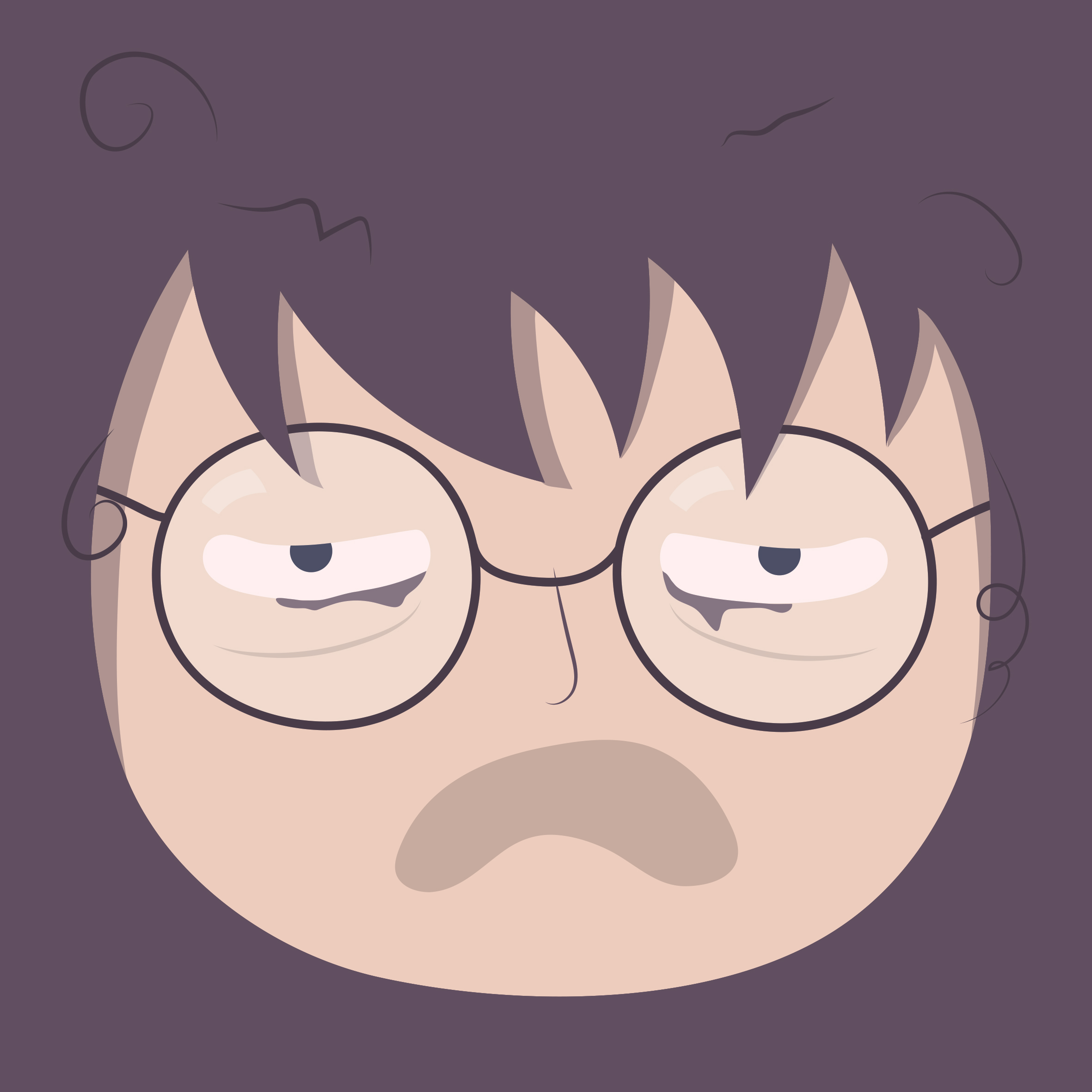 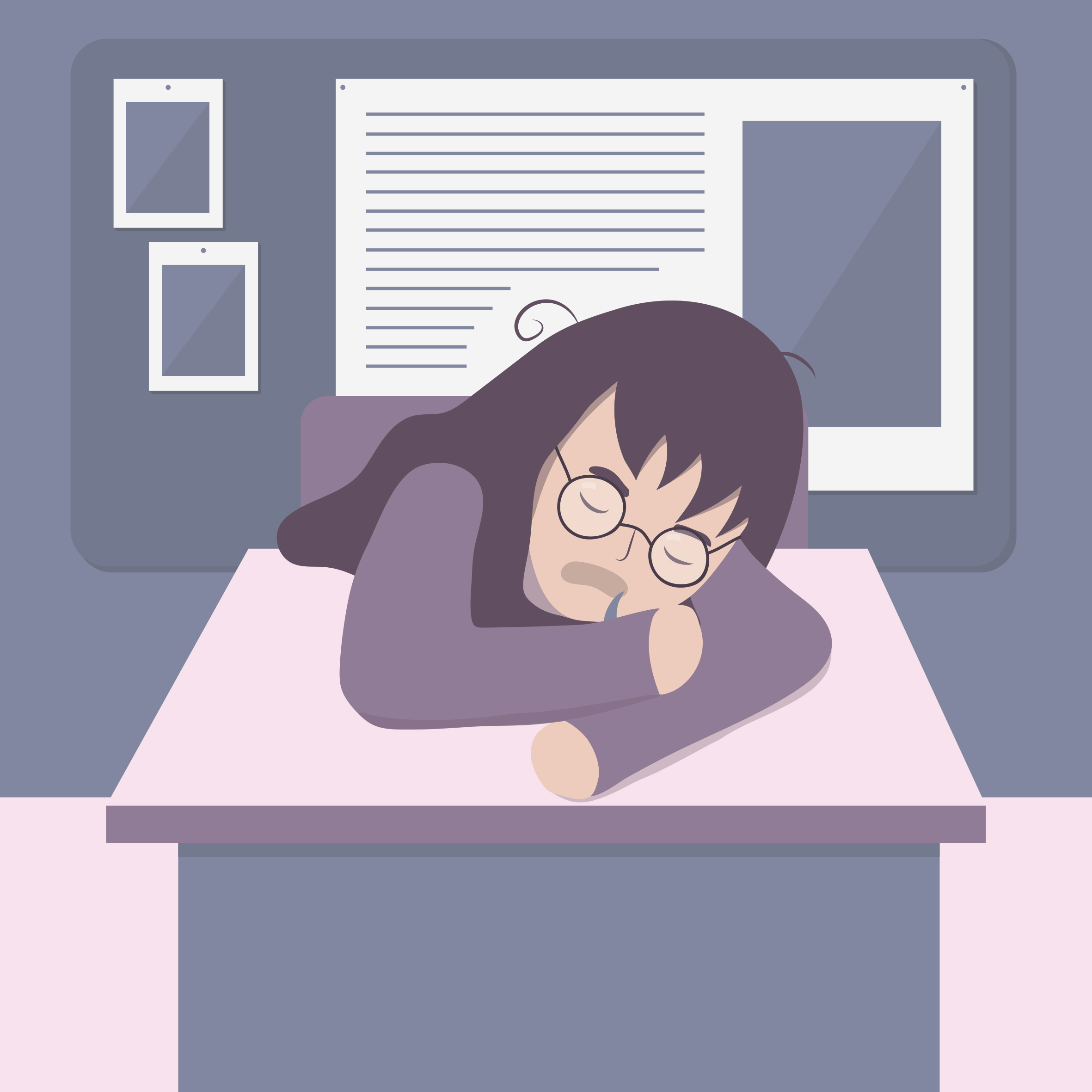 This doesn’t actually happen very often, but I felt that this scenario was only apt for a school project. The initial plan was to put myself asleep in a random place (on the floor, next to a wall, to show that I can fall asleep anywhere at any time), but I wanted to give the situation more visual depth in a proper location. 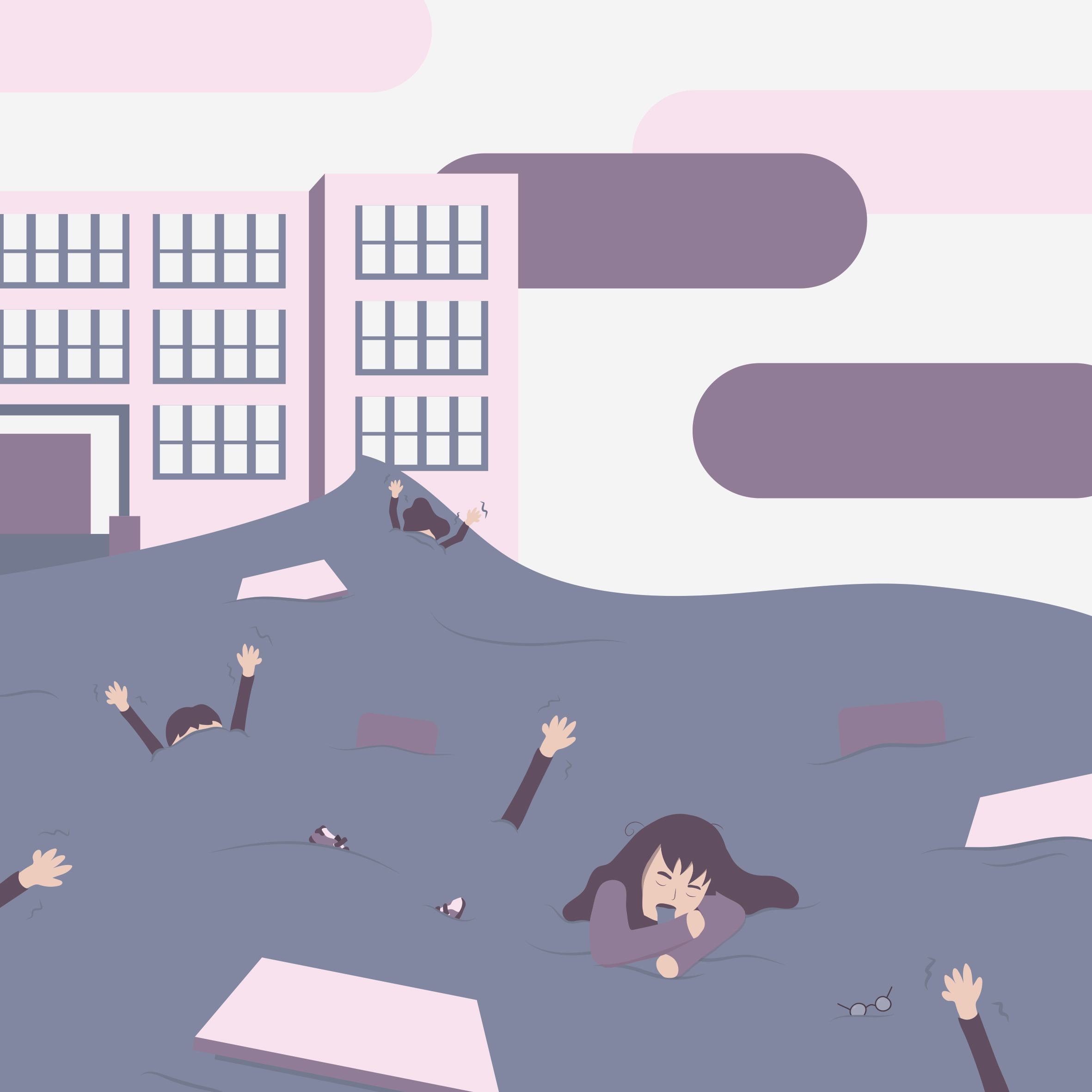 Creative ideations can be found in my visual journal!!! But… generally, I decided on going with a light-hearted comical concept despite the use of negative traits as I felt that a light-hearted theme would allow more freedom for colour harmonies and palettes in comparison to dark themes, which might have limited my ideas to mainly dark colours or monochromatic schemes (in my mind, at least). In addition, a dark concept would have added on to the pain of completing this project as compared to coming up with funny scenarios.

Receiving the brief, I instantly knew that I would be working on Illustrator for this final project as it is the one and only platform that I am rather familiar with.

I have always been a ‘brush’ kind of person, where I illustrate using the brush tool instead of the pen/shapes. As such, my illustrations always end up outlined. This was what my first panel looked like when I first started the project: 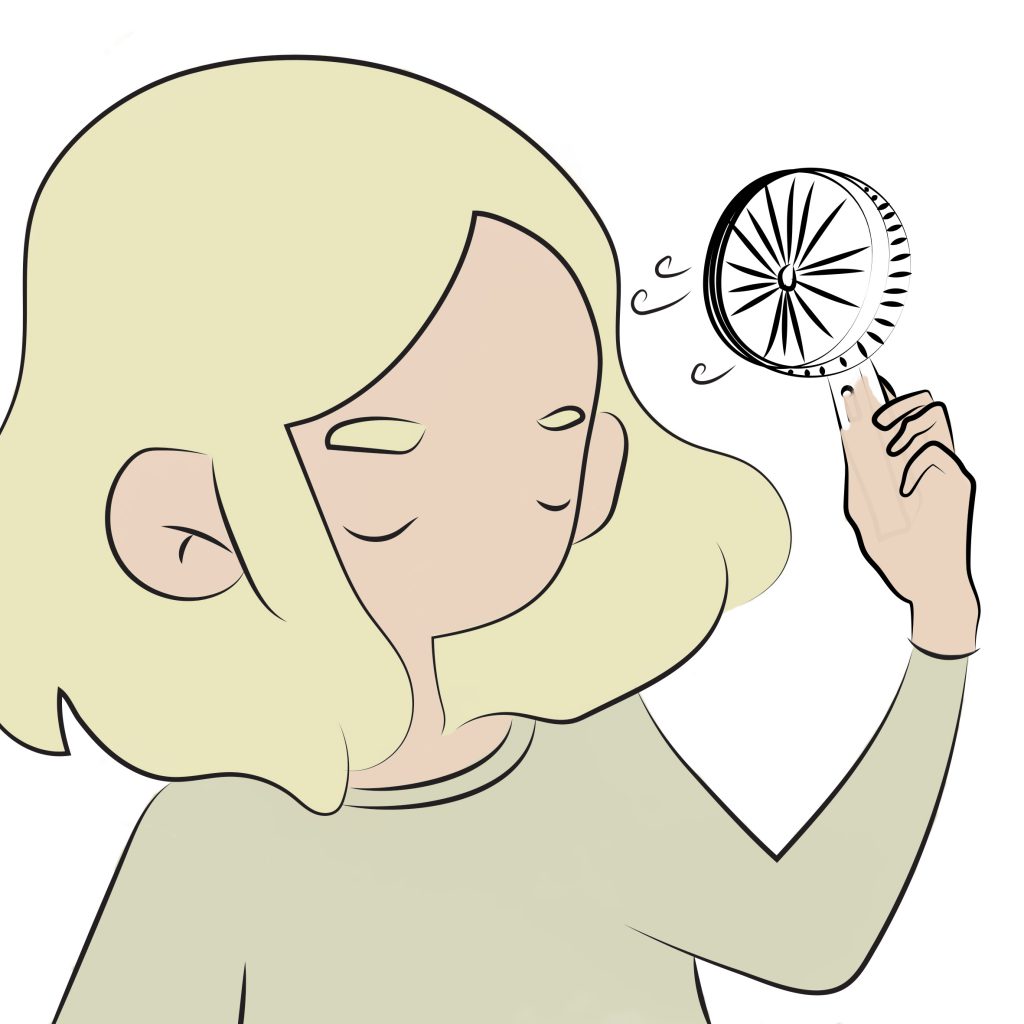 As you can tell, I gave up half way.

From this problem, I decided to look for art style inspiration that could serve as a challenge for myself while still remaining on the same digital platform. I initially had many many many tabs opened (3 windows full, to be specific) in search for inspiration and reference, but decided to focus on one artist only so as to not confuse myself with my art direction.

I came with the decision to reference only one artist from Instagram/Etsy, @bethewen.

Here are some of her works: 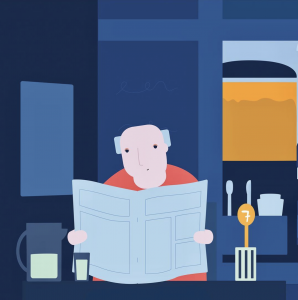 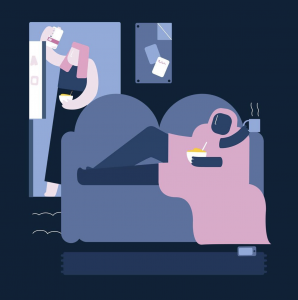 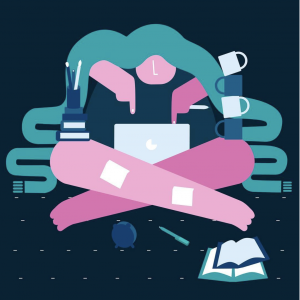 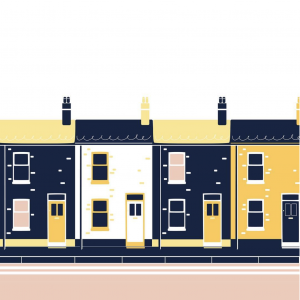 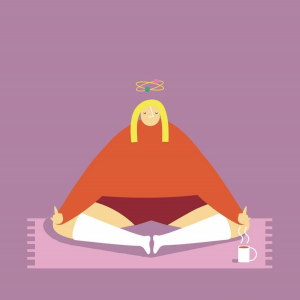 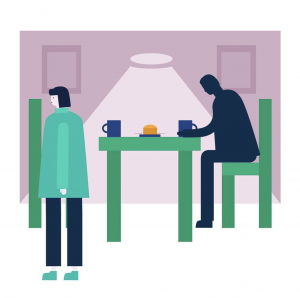 If you’ve not yet realised, the colour harmonies/schemes that I have chosen for my panels are very similar to hers, except for adjusted shades of colours.

I had eye-dropped all the colours from her different compositions to see how she made colours work together, then proceeded to Adobe Color CC to make my own base palettes, which I then further edited on illustrator on the go as I adjusted to what I needed.

And, ta-da! That’s how my panels came about.

Overall, I have thoroughly enjoyed this final project as well as the entirety of Foundation 2D.

I’ve specifically enjoyed this project, given that we were given the freedom of exploring mediums of our own choice, hence allowing me to explore the art style that I actually want to venture into, that is, on a digital platform. I have always wanted to challenge my digital art style but have never gotten the chance to in my free time, so I was glad that this project allowed me to explore another way of illustrating.

On another note, I’ve now realised how difficult it is to actually coordinate colours in a composition. Not only do we have to think about the colour harmony that we want, we have to find the colours to fit the harmony, then find the perfect shades, then find shades of the shades for depth… What?! I might just become a monochrome illustrator in the future to save myself from sorrow and pain. Just kidding. This project has been a good eye opener to my understanding of colour coordination, and in the future, maybe I could stop referencing real life photos/colours or other works and instead come up with my own creations.

Something I hope I could work on would be being more explorative in my colour choices, in the sense that maybe I could use non-realistic colours for real life objects… like using a colour from the same colour harmony for a person’s skin colour instead of using beige.

After seeing my classmates’ works, I’ve become even more inspired to further explore illustrative styles, despite already having done so for my work. I’ve realised that there are soooo many ways that one can illustrate within the same ‘style’, e.g. there can still be many different styles of illustrating, all while using vectors without outlines. I particularly enjoyed Vanessa’s, Si Hui’s, Esther’s and Clara’s works that were all either done on Illustrator or Photoshop, and I really hope to be able to further explore my own style while drawing inspiration from them and their own inspirations. I guess it’s time to stalk their OSS.