As my 3D sketch models were made before I knew about Ikebana, I hope to be able to find inspiration from arrangements that could possibly work well with my model. In this research, I would like to observe the dynamics of the different arrangements, noting what I like about them and may possibly explore myself. 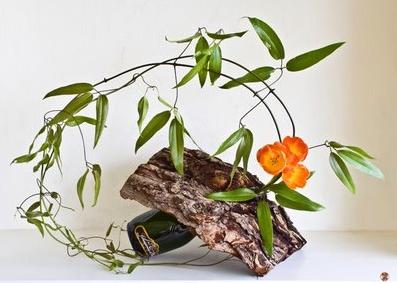 Here, I like the use of voids to indicate the presence of a sphere, or even a cylinder for that matter. It seems as though there is one object (cone in the first, branch in the second) that has a strong, positive volume with obvious direction, in contrast with the negative void that interrupts the sense of direction as it is circular. 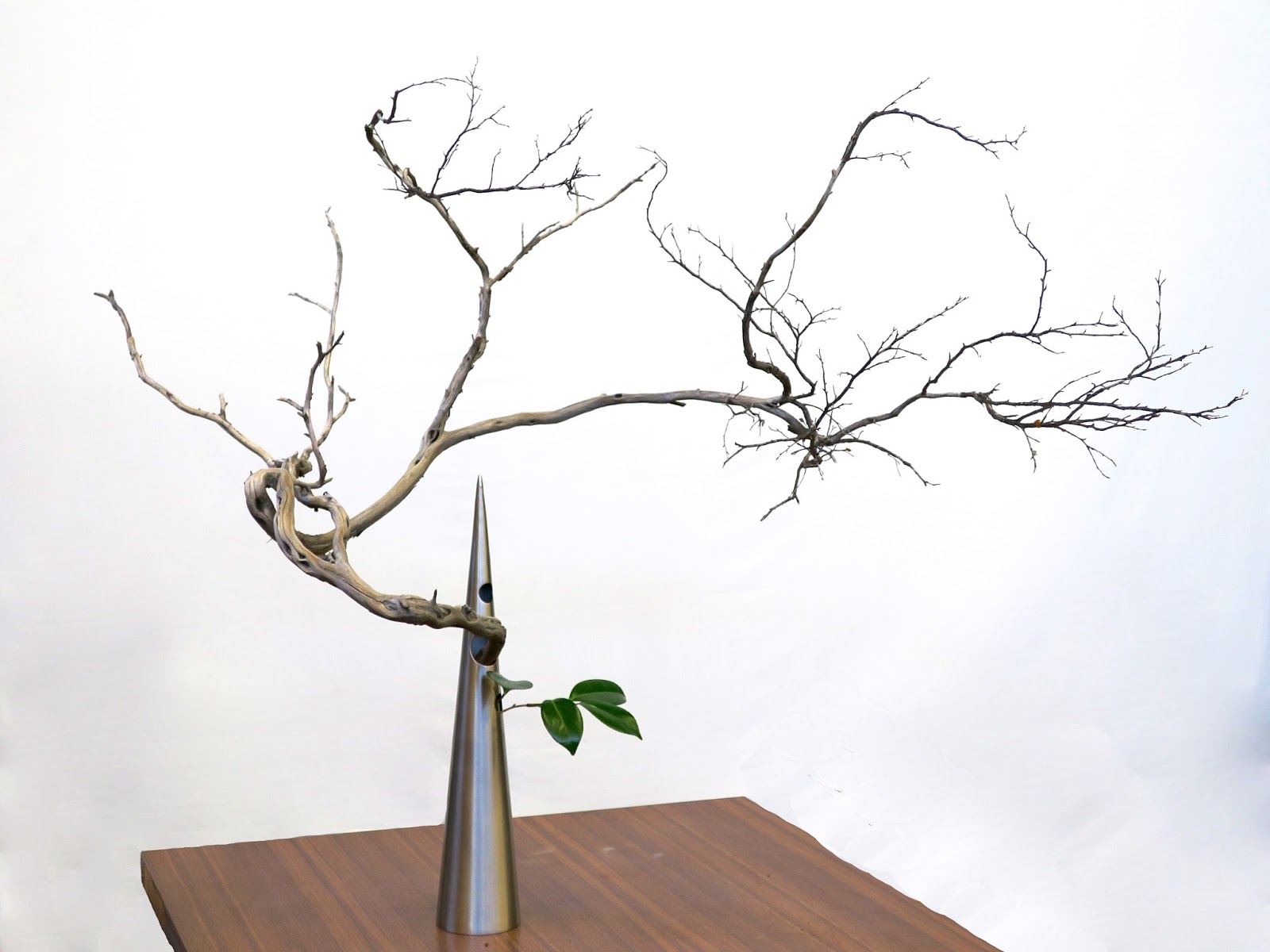 Here, I like the minimalism of the arrangement. The cone and leaves are neat and simple positive volumes, in contrast with the huge branch, with many branches creating voids, shooting out towards the right. The lack of excessive leaves/flowers makes the arrangement look very calm and peaceful, something I would like to achieve in my final model (as you would see in the mind map later on).

I like how the cone has a strong, obvious direction of pointing upwards, while the leaves give a slight hint of what’s to come – the ginormous branch that is going to go RIGHT just like the leaves. As the cone is on the ‘ground’, it seems fine that the branch comes from above. However, should the cone be high up in another arrangement while pointing upwards, the branch could instead start from below. For this, I really like the contrast between the small little volume of white flowers in contrast to the huge branch going up towards the left. This also feels minimalistic like the previous one, and overall I really prefer the minimalistic feel as compared to arrangements with a lot going on.

Similarly, I like the use of very contrasting colours, all while keeping things simple. There is also a very contrasting split of direction, where the bigger, more dramatic, go to the left, while the eye-catching flowers go to the right. This I’m not sure if I’m a fan of, although it is something I will consider for my model.

Overall, I realise that what I seem to appreciate more are arrangements with obvious direction, minimalistic objects and colours with maybe just one outstanding one. I came across many more Ikebanas that gave me some ideas, but if I were to put them all here this post would go on forever…

If you like kids, I highly suggest you watch this video of kids trying molecular gastronomy. I literally watched it just a few days before it was mentioned in class!

Here, I can note that instead of using one full positive volume, I can make volumes up with other things, like the sphere that has a void inside, as well as the cone that seems to be a pile of… something (I’m not so sure). 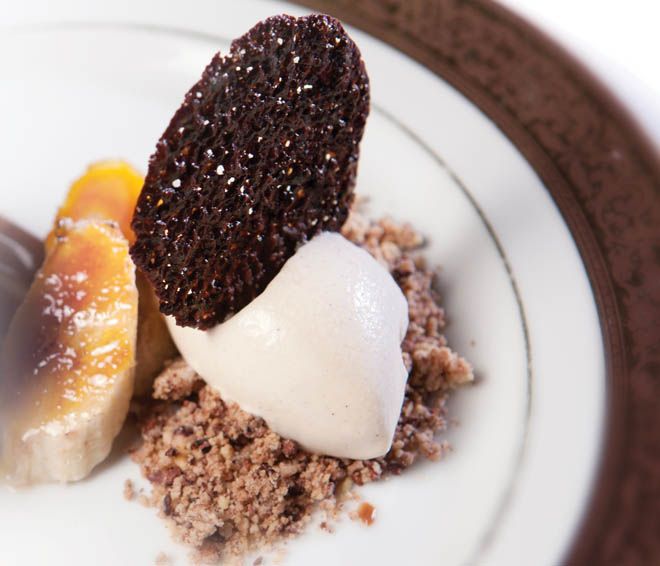 Wedging can also be used, as long as the shape of the object remains obvious. Also, while the direction is only going straight upwards in this example, I would like to explore how my volumes can give very obvious directions while stacked up on one another. 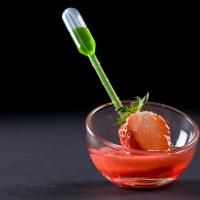 Imagining that this is food mixed with Ikebana, replacing the pipette with a branch can be a way of arranging my final model, similar to the Ikebana with the small volume of white flowers and the huge branch. Alternatively, the pipette can also kind of be a cylinder… hmmm. The half-filledness of it with a different colour could create an interesting aesthetic to the model. 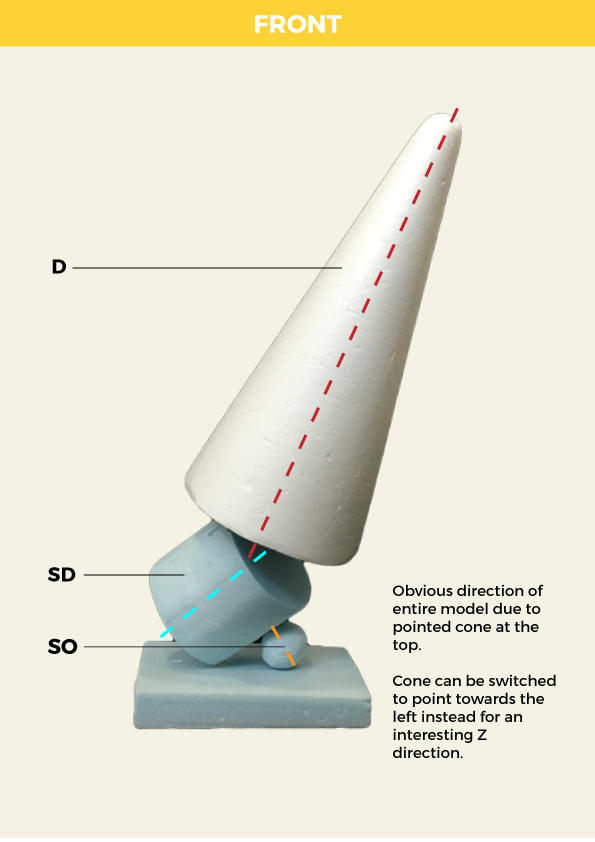 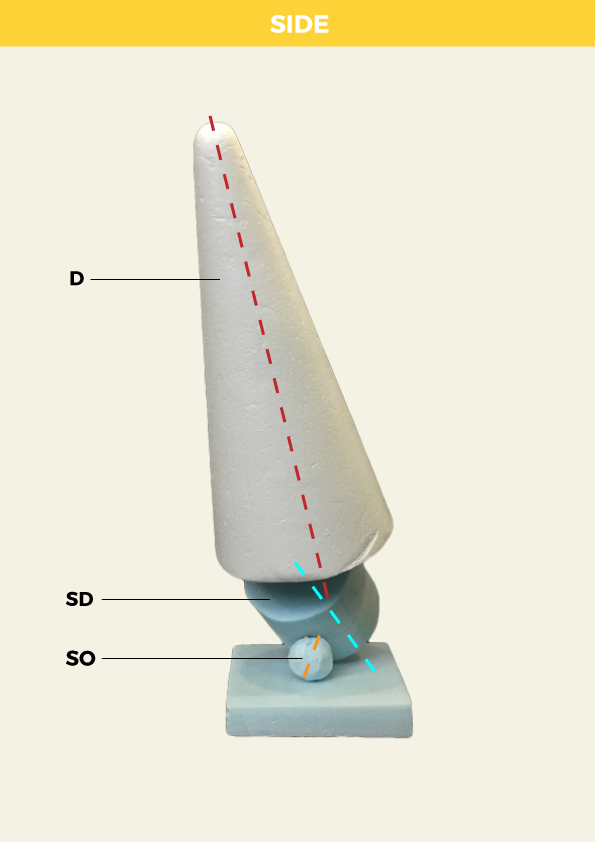 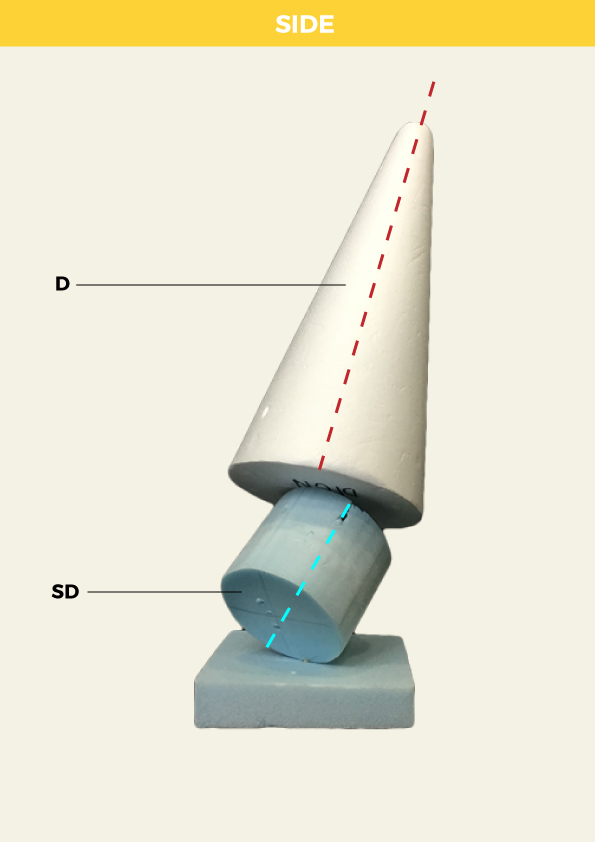 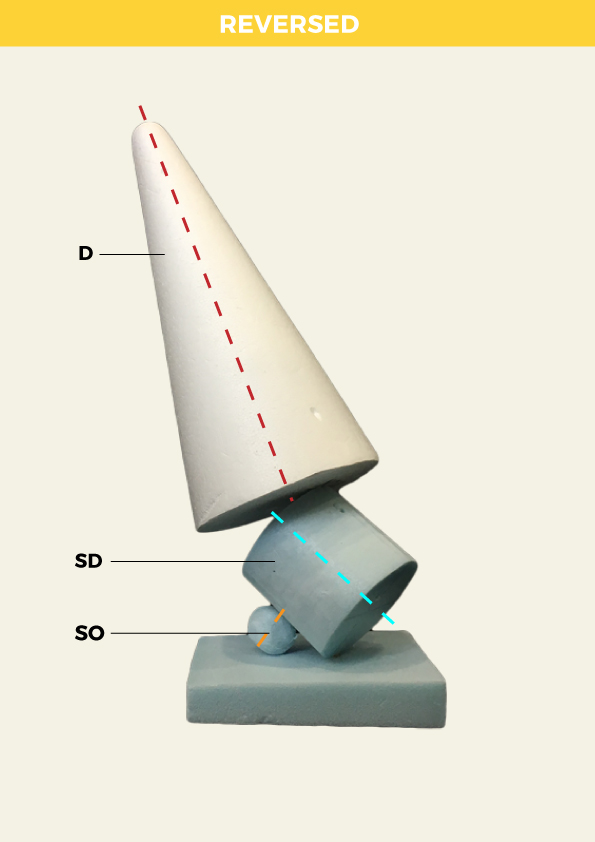 (P.S. Do imagine that the cone is smaller than it is. I broke 5 small cones while making this and had to do with a slightly bigger one…) 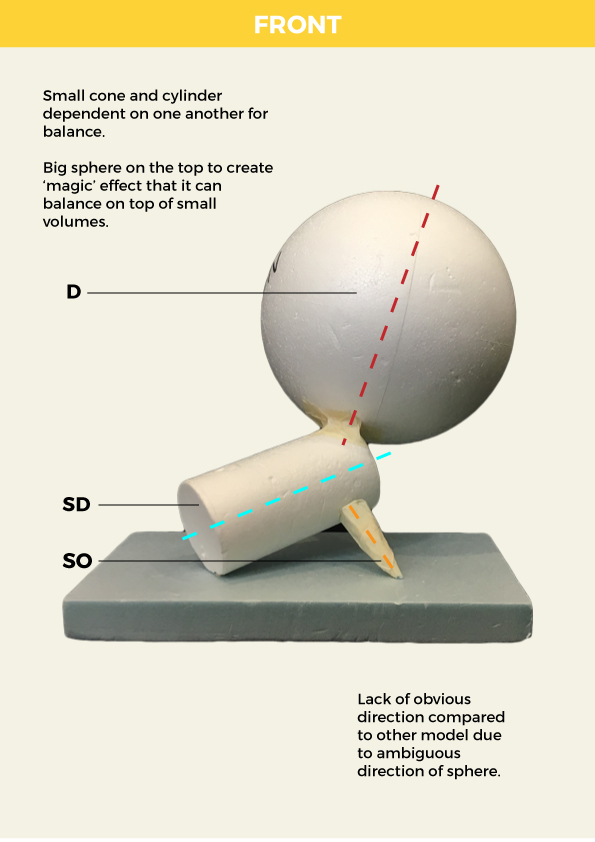 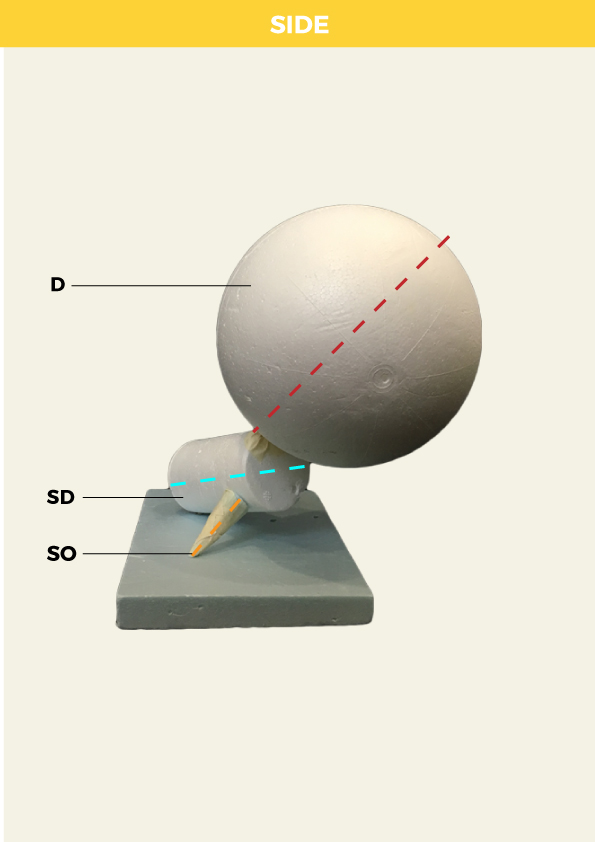 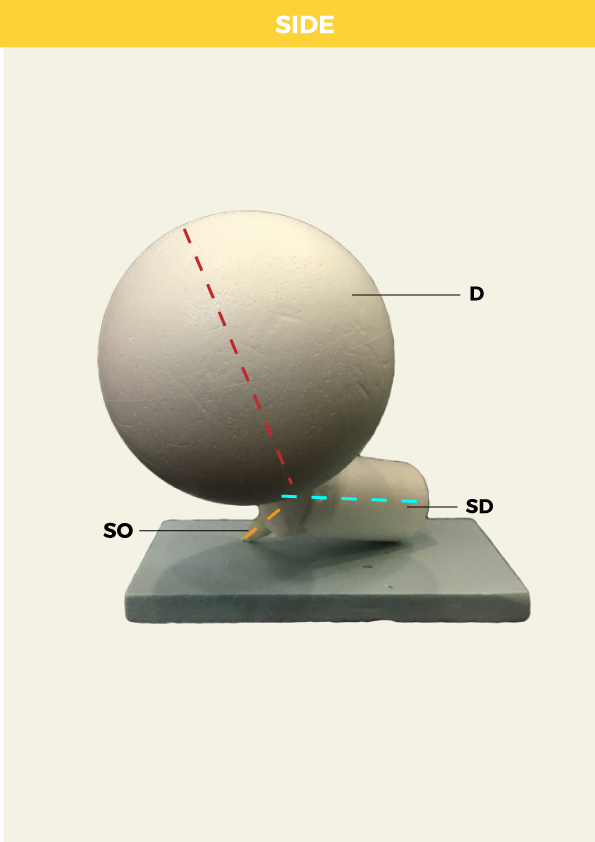 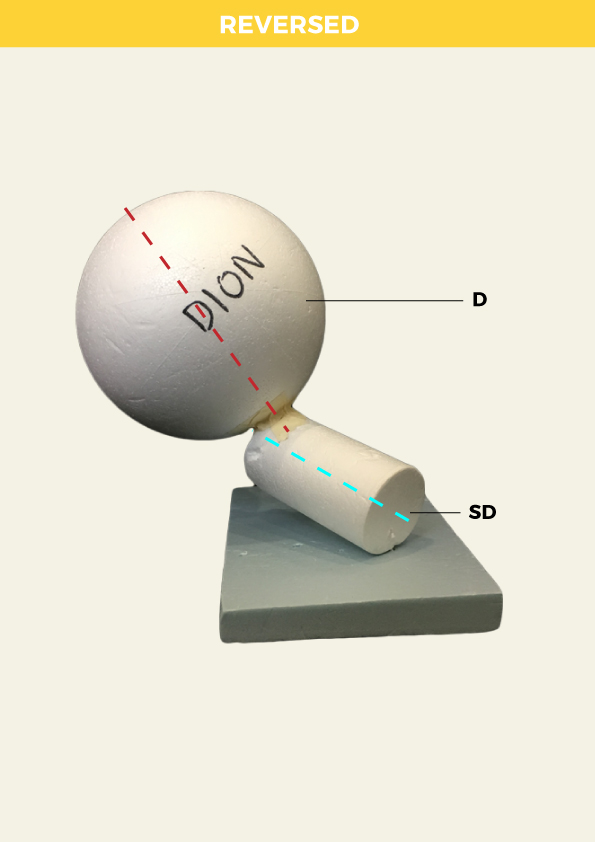 So, my lucky season is… WINTER! 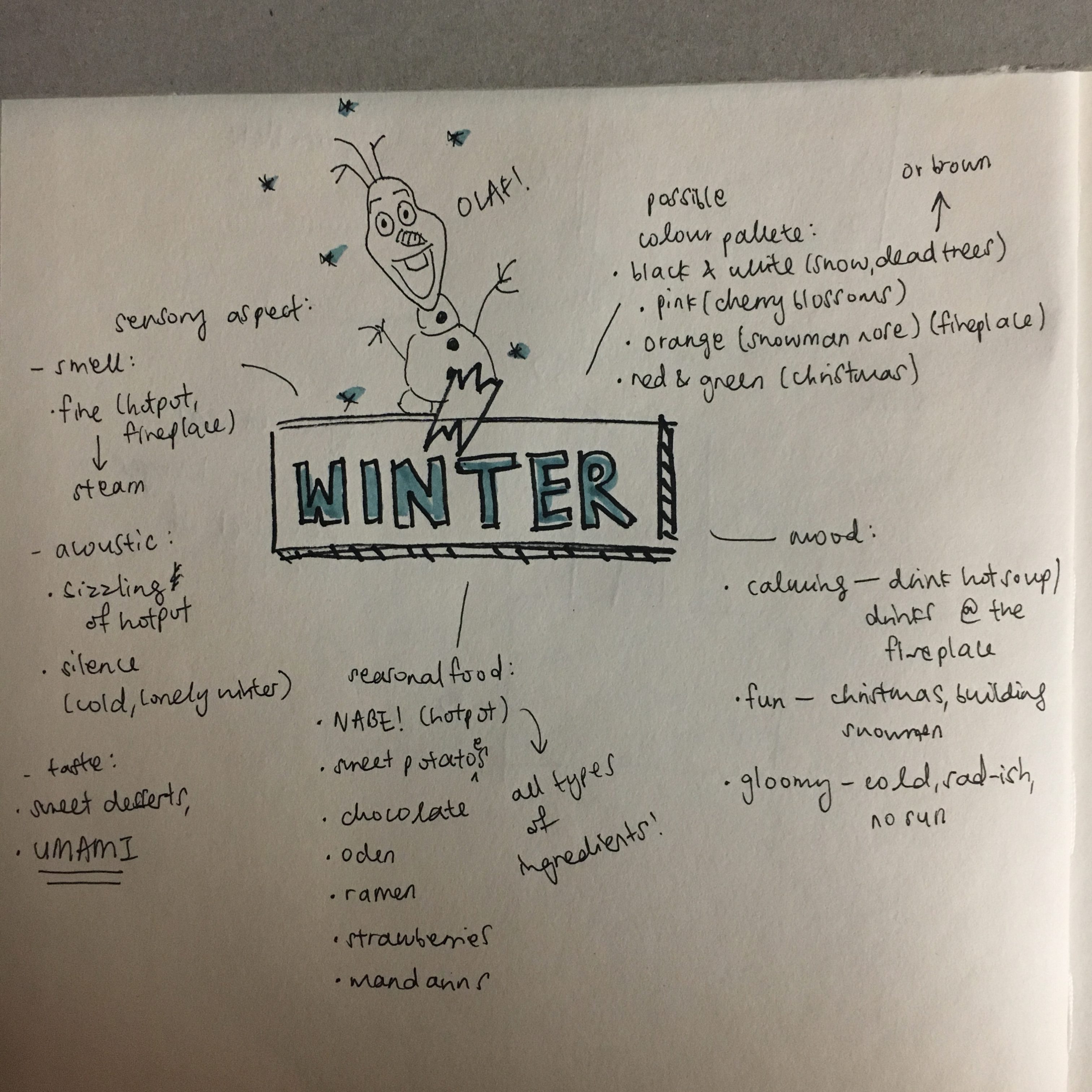 After researching on Japanese winter food, I decided to go with the theme of… NABE!!!!!

What else is better than drinking hot soup in the cold, gloomy weather???? Nothing!!!
Except, maybe purposefully eating an ice cream cone just to make things exciting.

You see, even Olaf enjoys the heat of the nabe.

Finally… We have come to this point… My FINAL MODEL!!! 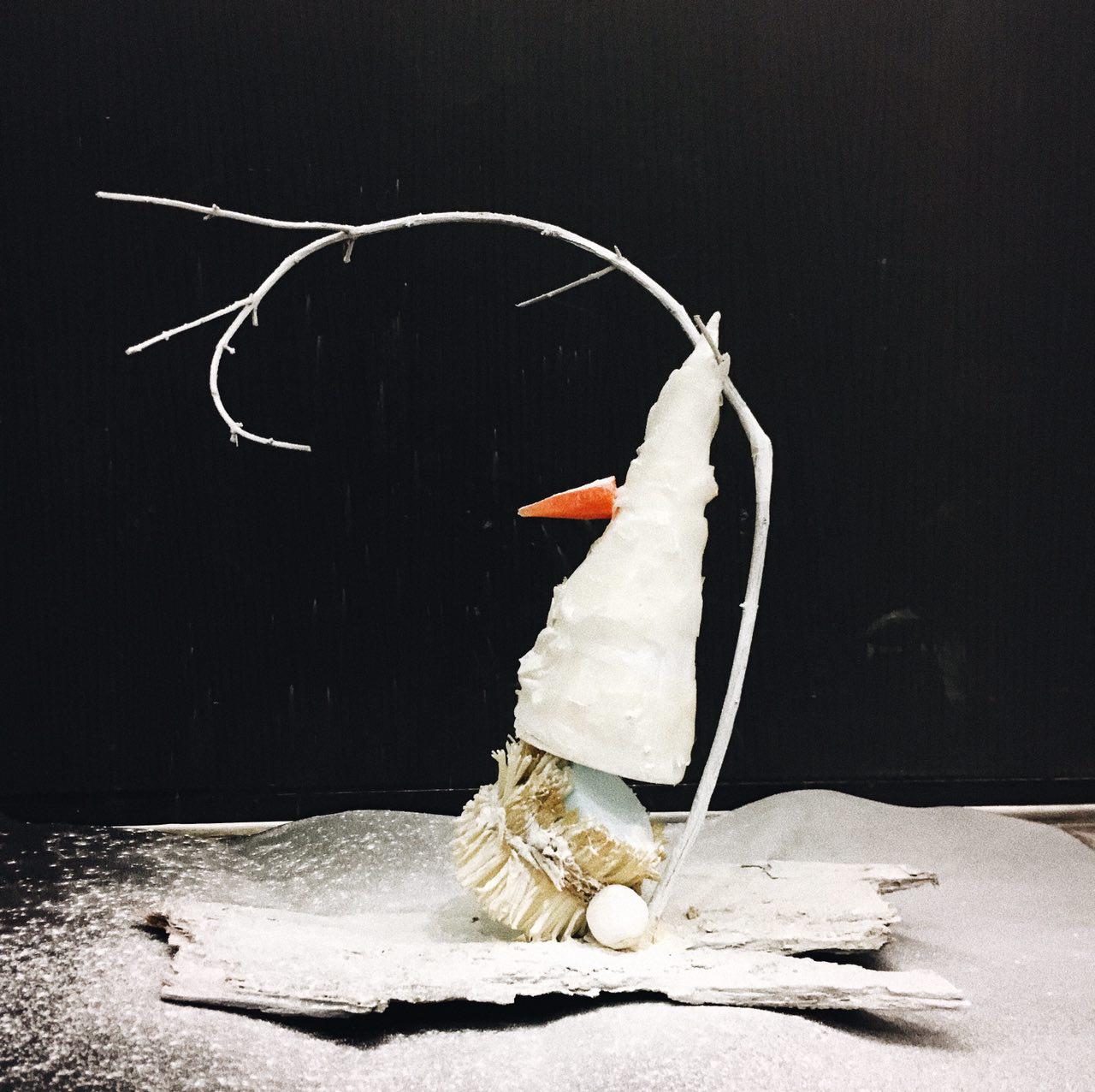 I decided to use all-white nabe ingredients, to go with the theme of a white Christmas, as well as to keep things minimal. The food items that I chose are: a white radish, enoki mushrooms (that turned yellow overnight), a fishball, and a carrot.

White Radish:
Due to the composition of my model, the white radish would have been way too heavy to balance on the enoki mushrooms and the fishball. As an alternative, I skinned the white radish, cut and pasted it around a white foam cone in a way that the radish can also represent a white Christmas tree. However, due to the radish being more wet than I expected it to be (it’s more wet than a carrot?!), the details of how I cut the skin turned out to be not-so-obvious, more so after leaving it for a night where they all stuck together.

How it’s supposed to be: 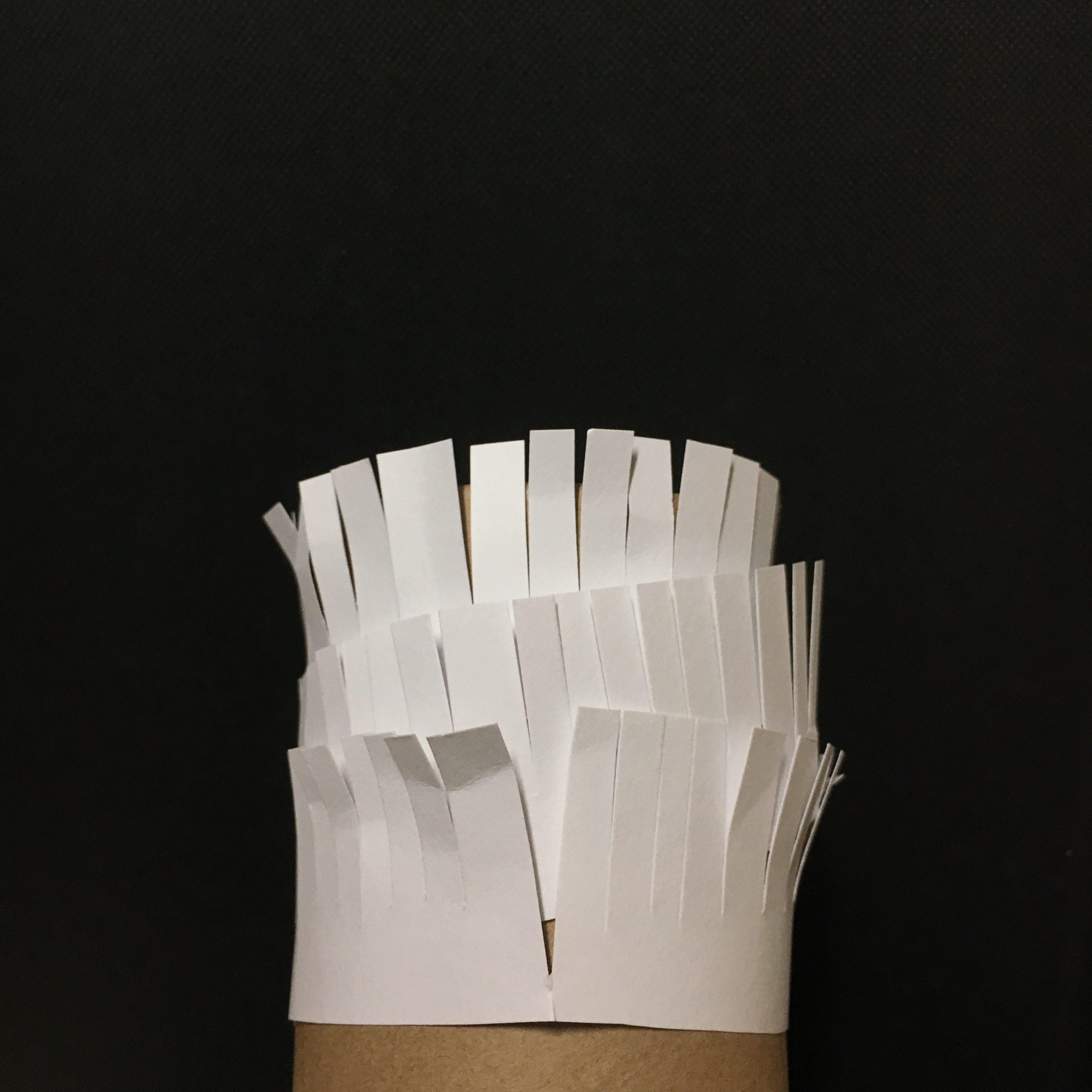 Instead of just using a cylinder, I decided to use a bunch of enoki mushrooms to make up the shape of a cylinder, as inspired by research. However, to help lengthen the life of my model before collapsing or rotting, I wrapped enoki mushrooms around a foam cylinder and tied it with twine hence representing a hay bale, along with its yellow-ish colour. I also used a white foam ball to represent a fishball. (P.S. I did not know mushrooms were that wet. Just like radishes.

“Something else”:
Inspired by Olaf enjoying his nabe sauna, I decided to put a little carrot cone, as a second subordinate, on my dominant cone to represent a snowman. As the carrot is orange, there is a stark contrast of colour amongst all the whites, hence giving the model a ‘kick’.

Base:
Originally, I wanted to use a wooden plank/sushi board to match the Japanese theme. I then wanted to use a black/metal bowl to match the nabe theme. Finally, I decided to use a big piece of bark from a tree’s trunk that was spray painted white (it was already white, then I made it more white), to match the overall white-Christmas-nature look with the use of a branch, a ‘haybale’, a Christmas tree, a snowman, and snow.

Originally, I wanted the branch to be black-brown, since trees in Winter tend to have very dark branches. However, I decided to spray paint it white to give the effect of it being covered by snow.

The branch was a result of many failed attempts of what I really wanted to do, as well as breaking my branch 500 times in the process while trying to curve it. These are some of the ideas I tried to achieve: 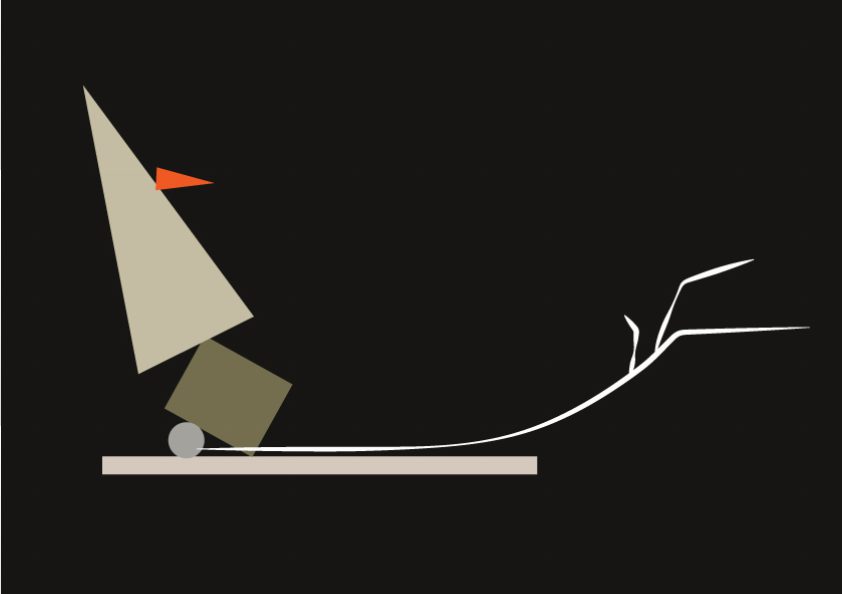 Inspired from research, since my model has an obvious direction of going upwards, I wanted a long branch to come from below instead, shooting out into the opposite direction. 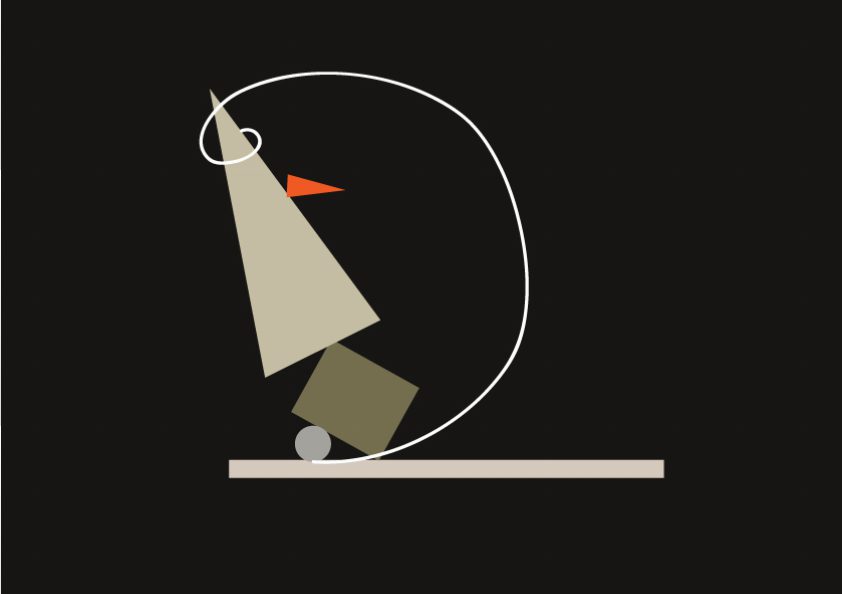 When I failed to achieve the first idea, I then experimented with the idea of creating a circular negative void with the branch, also inspired by research. The circular void then suggests an implied dominant cylinder. I then wanted to create a swirl around the tip of the cone so as to give dimension to the whole thing. Trying to swirl the branch was where my branch broke about 9487219312 times…. leaving me with no choice but to arrange my model as it is in my final showcase. However, I moved the structure to lean against the branch instead for more support.

As for the final layout, I could have instead shifted the entire model towards one side of the base. By doing so, the carrot and the branch will cohesively give a distinct sense of direction as seen below. 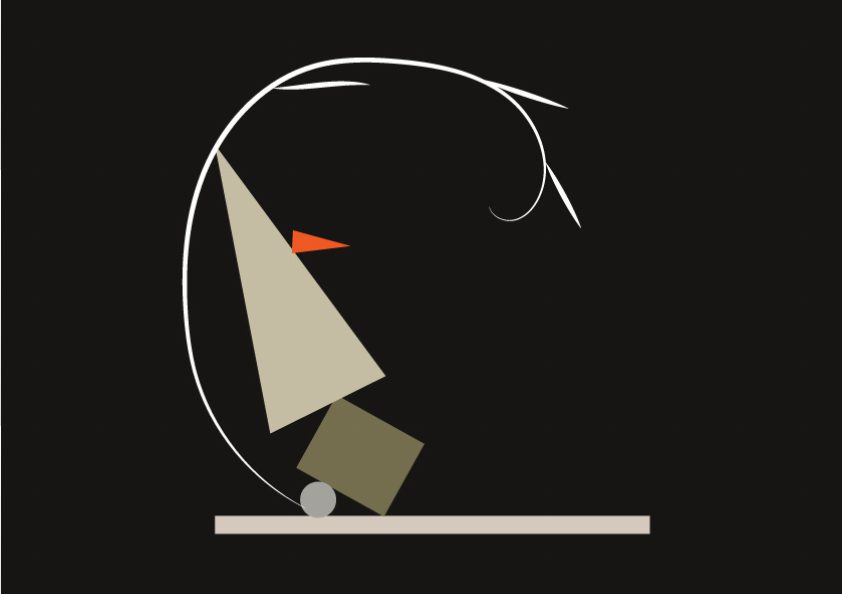 Finally, I ‘sprinkled’ baby powder (couldn’t get icing sugar from hall/school) over my entire model to represent snow, for a white Christmas! I quite like how the ‘snow’ gave more dimension to the model and made it more interesting that it was on its own. The ‘snow’ also helped to cover up the yellowness of the enoki mushrooms, as well as the pungent smell that the model was starting to give off after a night…