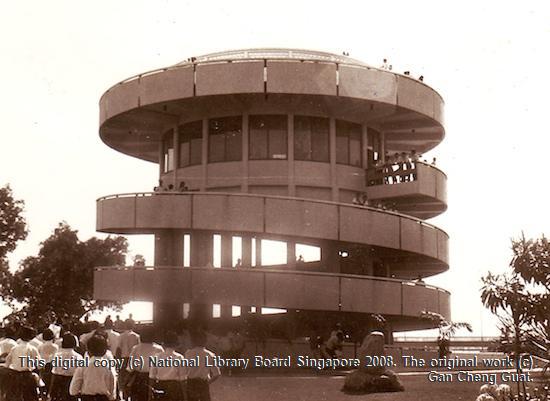 Floating 207-metres above the bay, the iconic world’s largest Infinity Pool provides a panoramic view of the ever-expanding Singapore skyline. The sky-scraping observatory platform overlooking the cityscape could be seen as Singapore’s prime symbol of progress today, but 50 years or so ago, it was Jurong Hill Tower.

60-metres above sea level, on the top of Jurong Hill, previously known as Bukit Perupok/Peropok, stands an 18-metre tall observatory tower. The $200,00 project was commissioned in the 60s by the Jurong Town Corporations (JTC) to become a platform for foreign guests and investors to have a panoramic view of the industrial estate. Intending to gain the confidence of these investors by exhibiting Singapore’s developing industrial site, the Government hope to create more job opportunities for locals.

This unassuming tower tucked away at the top of the hill has hosted many foreign ministers, Presidents and Vice-presidents and also the Queen of England, herself.

On the same hill also lies Jurong Hill park where many distinguished guests have planted trees in the “Garden of Fame“. Here’s a list of celebrities that  have done so:

A total of 30 trees were planted here between 1969 and 1984, before a lack of space saw a new Garden of Fame established on the grounds of Jurong Town Hall.