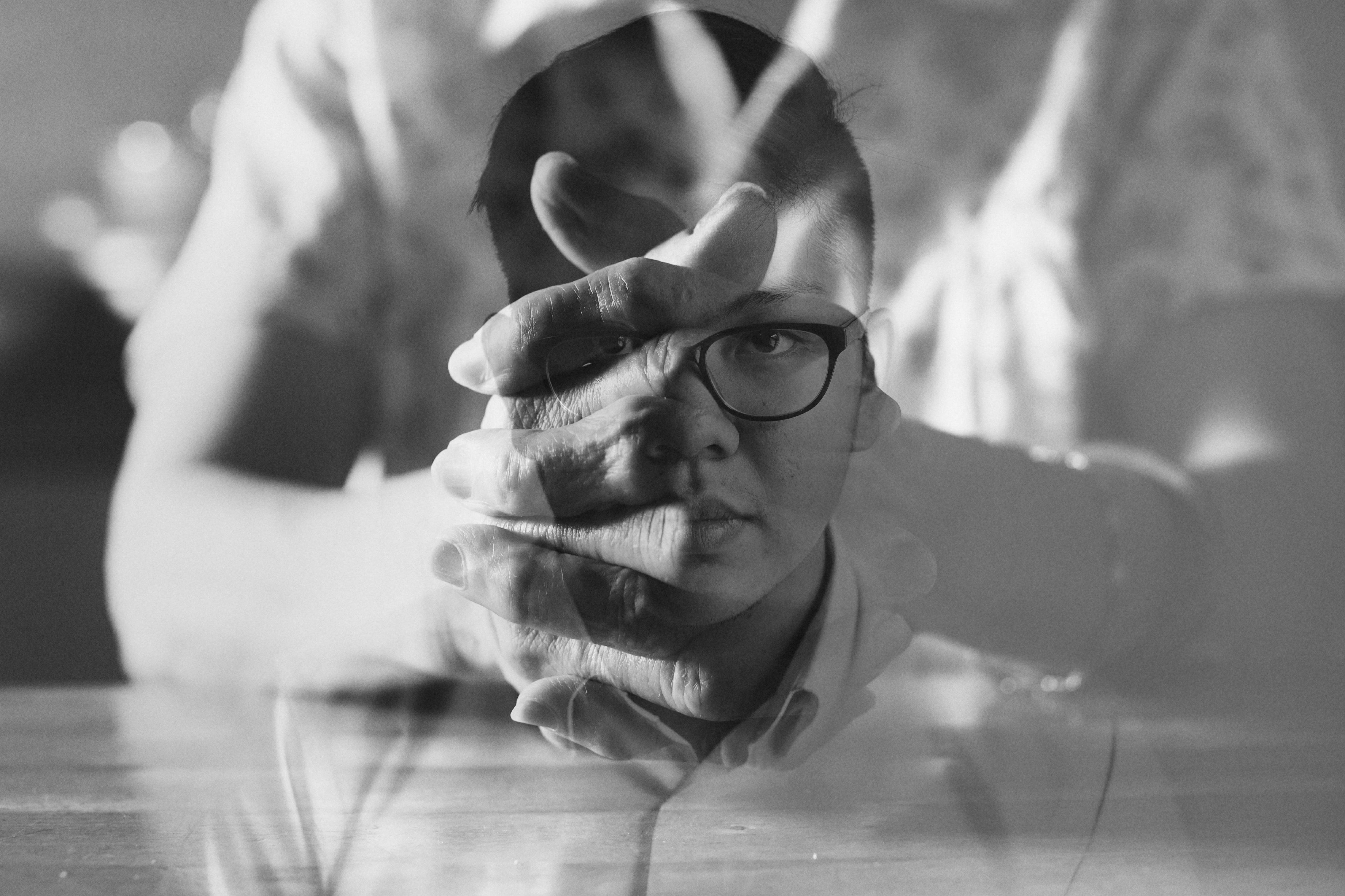 Our very first (4D) project 1A consisted of three portions:

Before I began to tackle the project as a whole, I was intrigued by the notion of transience, of how our life is like a book, bound full of fleeting moments that come together to give a feeling of substantiality. As such, I began to look for different visual styles that could express such a feeling, and a few came to mind. While doing my research, I found myself being inspired by different photographer’s works such as Brandon Kidwell’s “Wisdom for my Children” and Marthe Sobczak’s “Projection”. It was then I decided that part one of my project would be a set of double exposures, and I wanted both pictures to interact with each other. The photos represent three parts of my life that I hold dear: the person who means the most to me, my medium and my family. The first image shows a photo of me, overlaid with a picture of the hands who brought me up my whole life, my grandma’s hands. The second image shows a picture of a man walking into the distance, overlaid with a picture of my camera, to show how my medium is what brings me on adventures that enrich my life. Lastly, the third image shows a picture of my parents and me, overlaid with a picture of a rainy day window. My intention was to show how despite the stormiest seas our family has been through, blood ties are not something that water has the ability to wash away. For part two, I decided to go for a more straightforward approach in my photography. The object I chose was a Mamiya RB67, which was given to me as a present by my mentor. It was a gift to chart my growth, as being able to use such a slow and clunky camera like that would require a certain skill level which I have not yet attained. As such, I decided to show the intimacy of the user experience with this camera through my photos, the intimate relationship between the photographer and the camera. My photos are shot with a very shallow depth of field, focusing on where the camera physically “meets” the camera. Last but not least, for part three, I chose to shoot the bus as “My World”. For me, being someone who enjoys taking the bus and takes the bus with much regularity, I feel that it is a very special place to me. The bus is a transient space: people come in, they go out, and the process repeats itself day after day. But the experience of bus rides are usually something special. We get into our little bubbles of thought, we block out everything else, and thoughts that do not usually enter our heads are given the time and space for reflection. As such, I decided to show that by shooting regular people in buses reflected upon the glass windows, or any reflective/semi-reflective surface that I can find on the bus. In this series, I changed the aspect ratio to 16:9, as I felt that it gave it a greater cinematic feel, which was exactly what I was trying to go for. For this series of work I was inspired by Nguan’s “Singapore”, more specifically, how he is able to keep his work very consistent through his heavily desaturated colours, the time of the day in which he shoots which translate to very even lighting. For my reflections from this project, I felt that the limitations of this project (3-5 images, set theme) made me push myself a little more in the creative aspect, in terms of how I conceptualised the images, to the execution of the images itself. I had to pay more attention to lighting and composition in order to make the ordinary stand out. As such, a task that seemed so simple in the beginning became a whole lot harder than I expected. Nevertheless, the experience of working under the constrains were actually a welcome as it took a lot of the decision-making out of my hands, while still allowing me creative freedom. Lastly, this is my final layout.