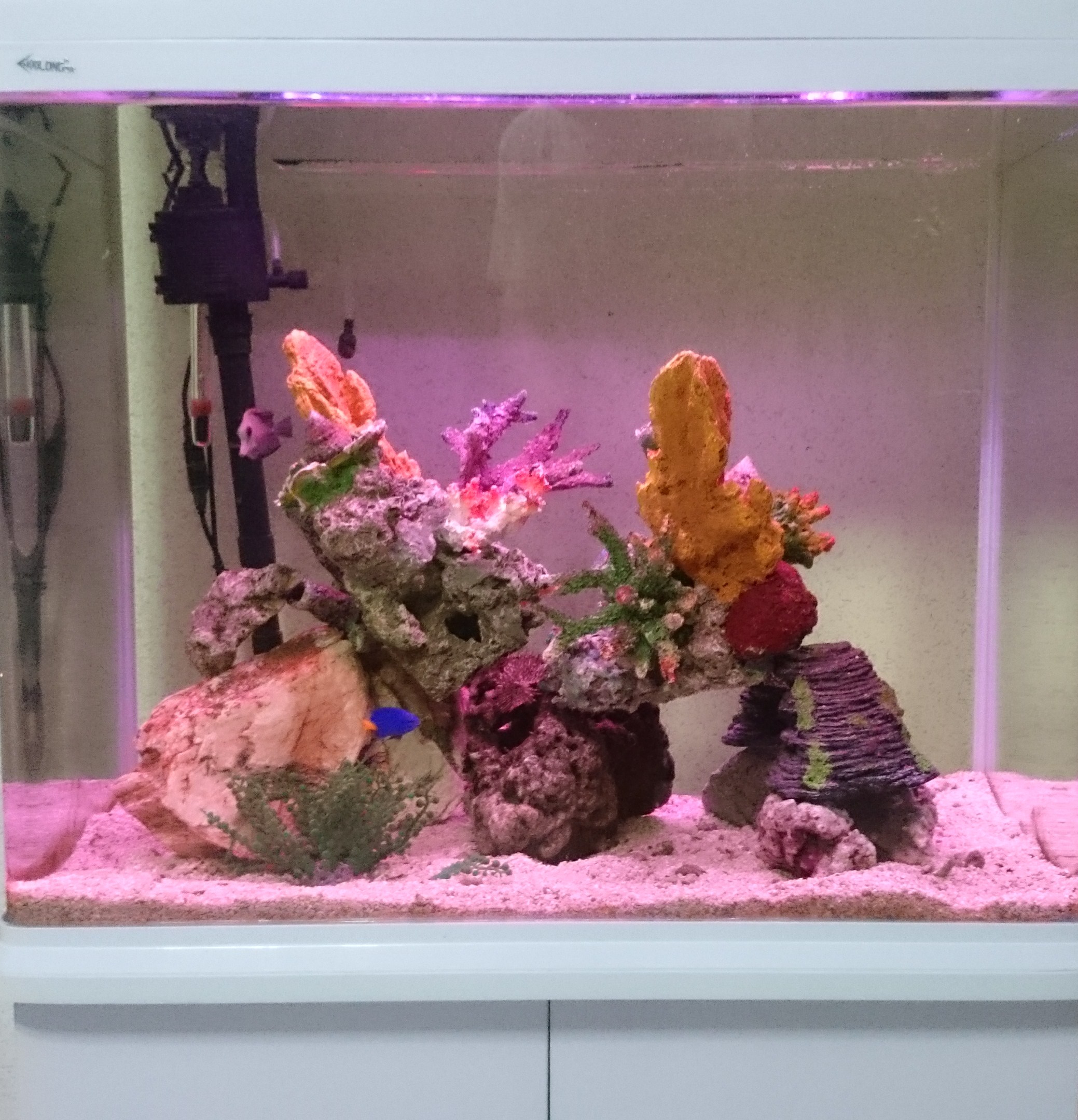 Inspiration:
I got my inspiration from ‘My Dad fish tank’ which features the characters in the ‘Finding Nemo’ movie. The Fish Tank is beautifully decorated with active fishes swimming about – Wonder if they are planning an escape. I noticed various fish movements and behaviors. Some were food to the bigger fishes while some were sold for their rarity and beauty.

– They sell birds too.

A trip to local fish farm. 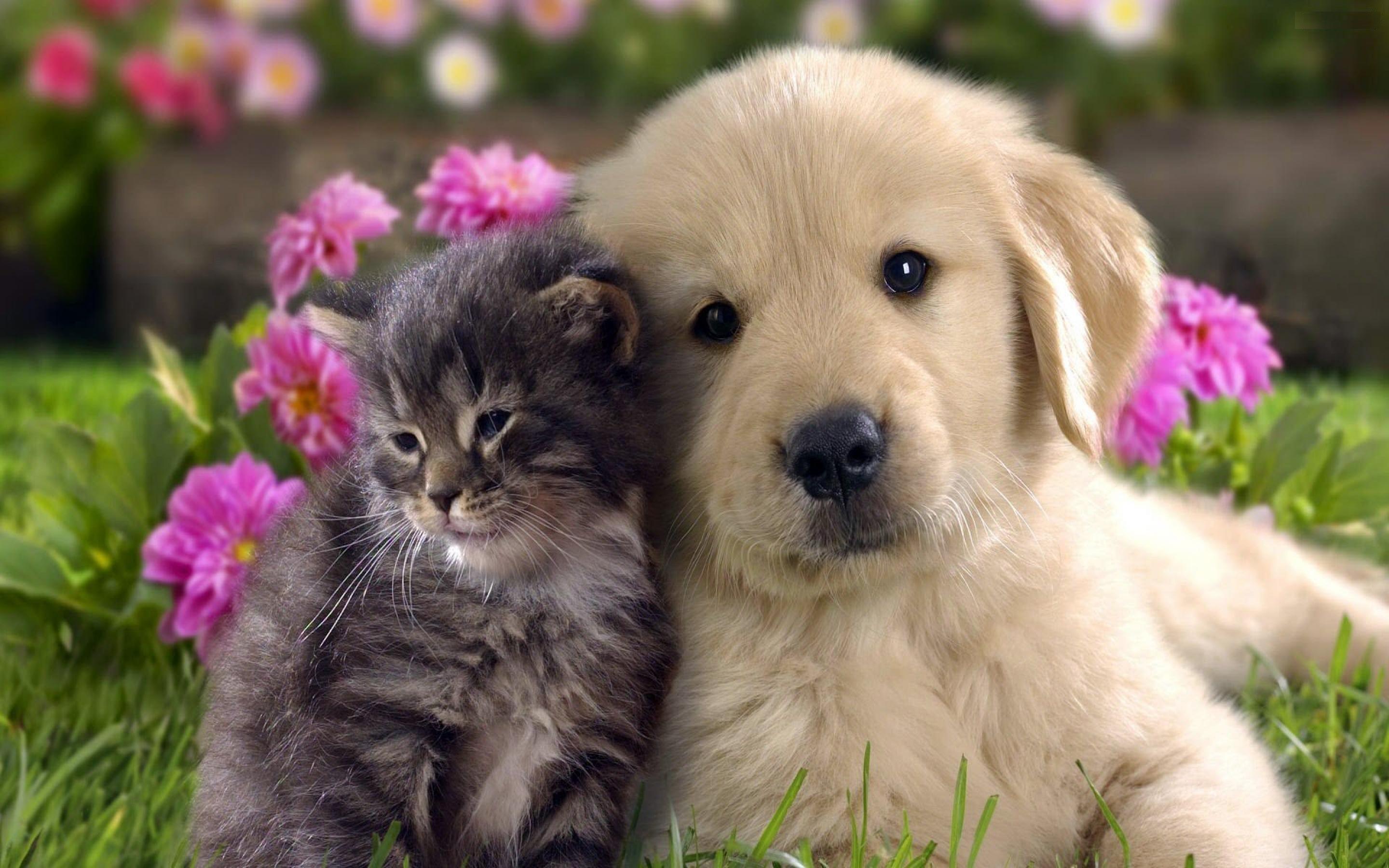 I have decided to work on the Nursery Rhyme: A Dog and a Cat went out together.

Had a lot of fun experimenting with the tools in Photoshop,
below are some pictures related to this Nursery Rhyme.

A Dog and a Cat went out together.

A dog and a cat went out together,
To see some friends just out of town;
Said the cat to the dog,
“What d’ye think of the weather?”
“I think, Ma’am, the rain will come down.”

“But don’t be alarmed,
For I’ve an umbrella
That will shelter us both,”
Said this amiable fellow.

I think it is important to mention about the relationship between the Dog and the Cat and possibly relate this to the twenty-first century. But of course, animal as representation of human context. – Not talking about mutation of Dog & Cat. Therefore, be flexible and open-minded when faced with arguments or displeasure.

Similar to the previous poem I’m working on: “What Does the Bee Do?”
Both talks about relationship but in the different context.
For “What Does the Bee Do?” – It talks about the cohesion between families inside the beehive.
Each Bee have a role in the house hence a awesome workforce.
For “A Dog and a Cat went out together” it’s more focus on the subjects rather than as a whole.

Applying Surrealism into my concept – Trial 1
Doing my best to conceptualize the components for the compositions.
Hope I’m doing it right. Dingbats created from the ‘What Does the Bee Do?’ poem.
Explored the various function including the mix and match from (Threshold, Half-Tone, Posterize) learnt from Mr.Lawrence photoshop lesson.

I enjoyed and appreciate the take-aways from the lesson.

Back to Work-In-Progress.
– Idea generation on the go! 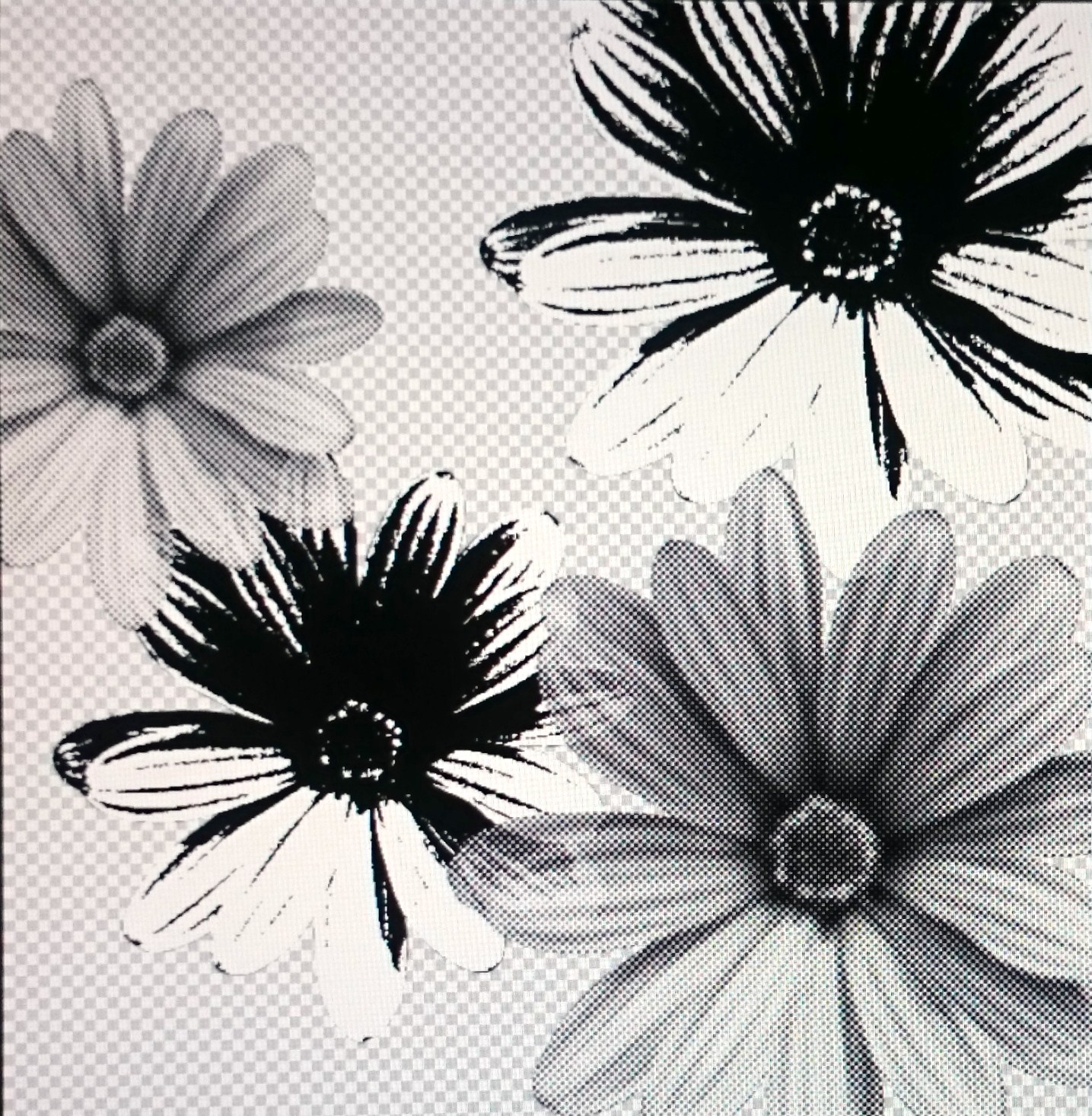 Hannah Hoch was a female artist within the Dadaism in Germany.
[Raoul Hausmann was the artist who influence Hannah Hoch to join the Berlin Dada movement]

Her unique art style was the experiment of many different types of art.
Some examples are ‘Paintings, Photography, Fabric design, Handicraft etc.,
Her art style was known in art history as ‘Photo montage’.

In most of her early artworks, her concepts were based on ‘Women in actual life’.
For examples: Women smoking, wearing skimpy clothing and working.
It seems as if though the artworks convey a strong message of ‘Fighting for gender equality’..
[Because women in her period were discriminated.]
As a result, expressing ‘Feminism’ as a type of expression in arts. One of the popular artwork by Hannah Hoch was the Da-Dandy.
‘Dandy’ = ‘A men who cares a lot about this appearances and the clothings he wears’.
As explained earlier, Hannah Hoch fused the idea of ‘Dandy’ and ‘Women’ into ‘Da-Dandy’.
*[Amazing isn’t?]*

In this artwork, the women are seen wearing nice jewelries, fashionable hats, dress and heels this therefore justify the expression of ‘Female Dandies.
In addition, Hannah Hoch seems to invlove Dadaism in this artwork. She mention that the ‘monocle’ was a sign for the Dada which imply so. The ‘Strange Beauty’ shows a naked women lying on one side of her body with the genitals exposed.
What is ‘Strange’ is that the human head was replaced with a alien head wearing spectacles.
What is even stranger is the hidden message in this artwork.

The similar analysis I had with the ‘Da-Dandy’, I seems like Hannah Hoch focus her artwork on ‘Feminism’.

I was amazed by the abstract artworks by Hannah Hoch, I really like her works.
Her involvement in the Dada movement have deepen my understanding of a feminist art.
In addition, I like the idea of how each of her wonderful artworks holds a unique meaning and symbolism respectively.

Artworks: G7, The story of the little red square, Postman

El Lissitzky was a Russian artist within the constructivism art movement.

El Lissitzky was known for his ‘Proun’ series of artworks.

English: Design for the confirmation of the new
Russian: Proekt utverzhdenia novoga Beat the whites with the red wedge, El Lissitzky, 1919

One of the popular artwork done by El Lissitzky is the ‘Beat the whites with the red wedge’.

In this constructivism artwork, El Lissitzky demonstrate a type of revolution by using simple geometric shapes to convey a story. For example, he made use of the ‘red colour’ and the penetrating triangle as a representation of the ‘Revolutionary fighters (Red fighters)’.

Similar to Hannah Hoch, I like the idea of them encrypting messages in their artworks. By doing so, it engage the audience.
Furthermore, it is amazing how basic geometric shapes and colours can be incorporated to tell a story. The coexistence of different forms and shapes bring about the uniqueness and meaning in them.

Dada vs Surrealism vs Constructivism I find these poems suitable as my project.

What does the bee do? – Christina Rossetti

I once had a sweet little doll, dears,
The prettiest doll in the world;
Her cheeks were so red and so white; dears,
And her hair was so charmingly curled.

But I lost my poor little doll, dears,
As I played in the heath one day;
And I cried for her more than a week, dears;
But I never could find where she lay.

I found my poor little doll, dears;
As I played in the heath one day:
Folks say she is terrible changed, dears,
For her paint is all washed away,
And her arm trodden off by the cows, dears,
And her hair not at least bit curled:
Yet for old sakes’ sake she is still, dears,
The prettiest doll in the world.

The poem exemplifies climax and anti-climax nicely.
The ownhood is expressed even at the loss of outwardly appearance. -Makwana In my case, I believe Hannah Hoch ‘Feminist’ style is most suitable for my theme.
I would like to apply the ‘Photo-montage’ technique into my design, that is combining 2 or more images to form something new.
Although El Lissitzky style does not really works for my concept, it is definitely alright to study the use of ‘expressionism’ isn’t?
Interesting! Let’s get things moving!

In this video, Marcus race against time to deliver the tonics in order to save a life.
He faced obstacles during his way back home as a result slowing down his speed.
Marcus lost in the battle against time.

Ecclesiastes 3: 1-2
3 There is a time for everything
and a season for every activity under the heavens: 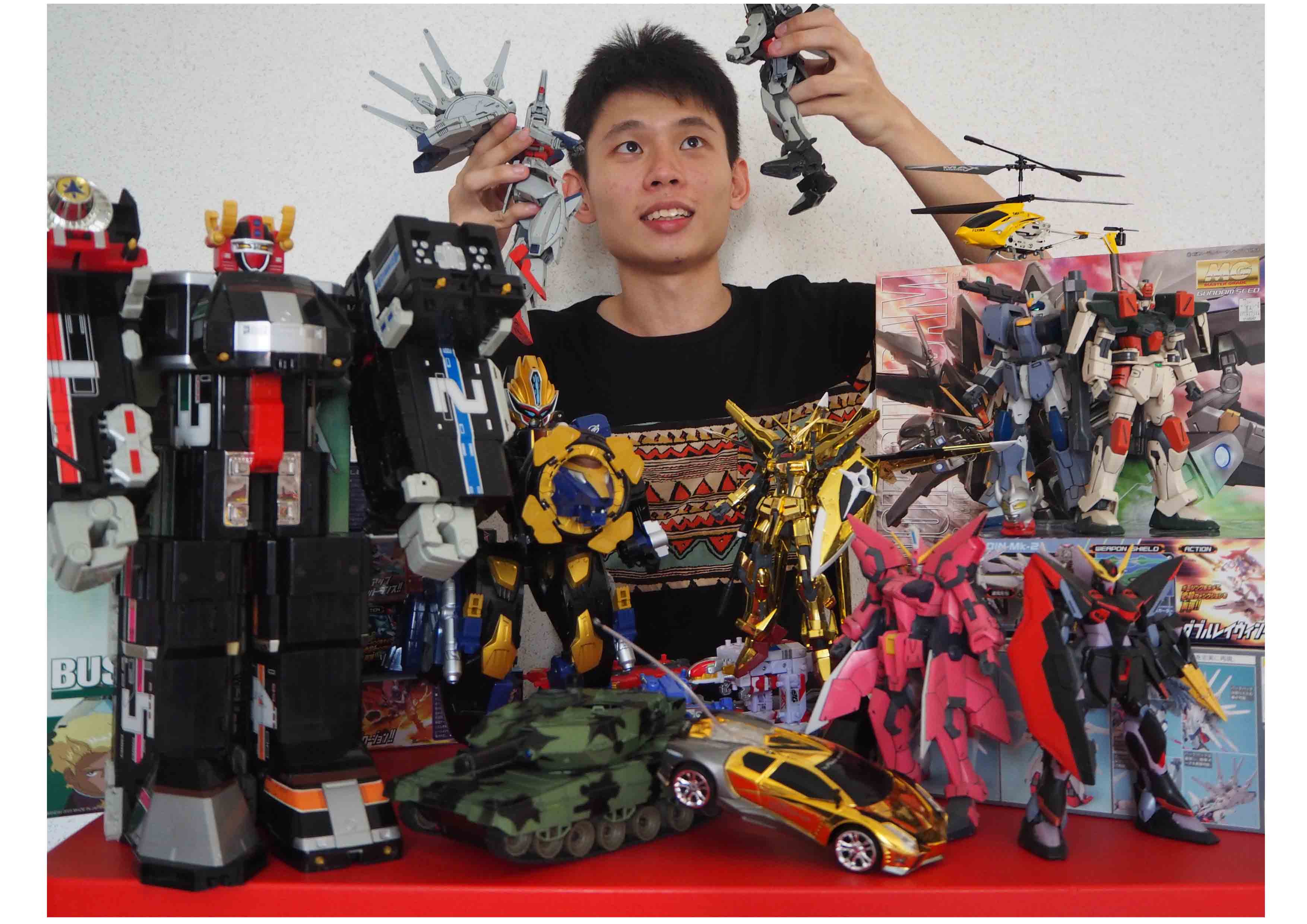