This post marks the end of the first foundation 3D project – Pandora’s Box. 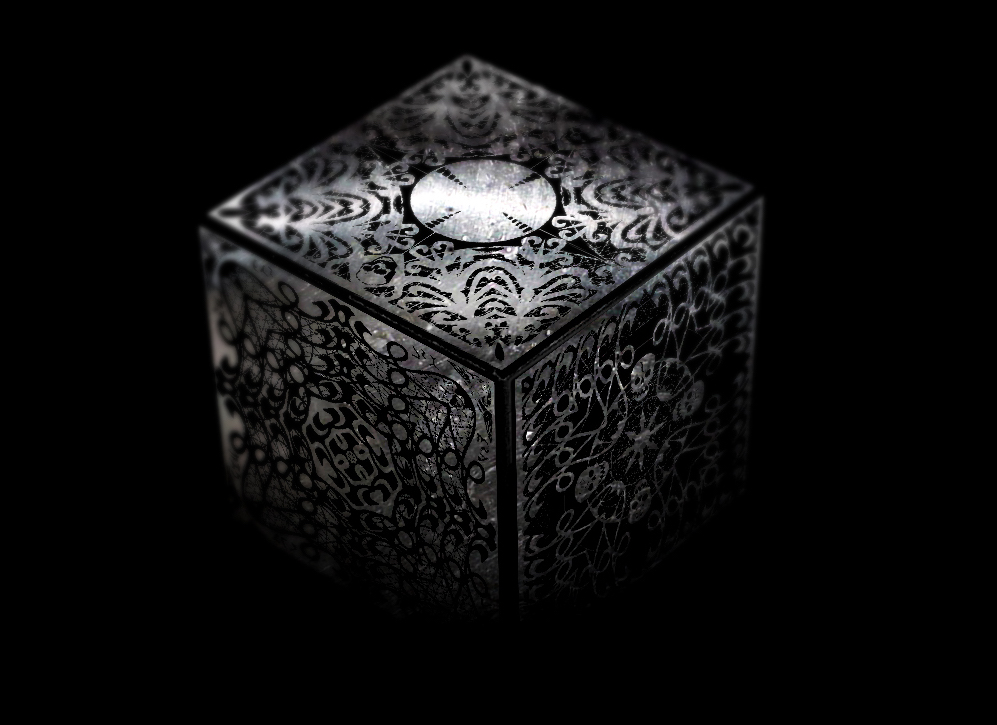 This post will be written in the following sequence:

For this particular project, we are to create a 3D sketch model that composites of rectilinear volumes.

Definition of Rectilinear: Moving in, consisting of, bounded by, or characterised by a straight line or lines.

Essentially, we are to organise 3 rectilinear volumes, establish the dominant, sub-dominant & subordinate relationship among them and create a composition that exhibits the word given to us.

For a better understanding of the terminologies involved, you can check it at my previous post: https://oss.adm.ntu.edu.sg/engj0007/3d-2d-sketch-analysis-of-interesting-object/#more-111

I momentarily blanked out the moment I opened the slip of paper that I reached out from the pandora box. I have never heard the word zing before and it got me really panicky as I had to create a composition with the word. In an instant, I whipped out my phone and googled the definition of it.

The only thought that came to my mind was ‘Crap’. I honestly had no idea how I was going to come up with a composition that exhibits zing.  Using the boxes that Cheryl instructed us to bring, I started organising them to the word while keeping in mind to establish the dominant, sub-dominant and subordinate relationship among them. Photos of the experimental process will be shown in the following point.

After several fruitless try, I went on to consult Cheryl on how I could improve on my composition. She told me that Zing also means magic and went on to provide me with various ideas on how I could go about organising the boxes to exhibit the word magic. One of it was to have either my sub-dominant or subordinate seem like it’s floating or levitating. Having settled on that direction, I decided to create a mind-map to consolidate my thought-process. 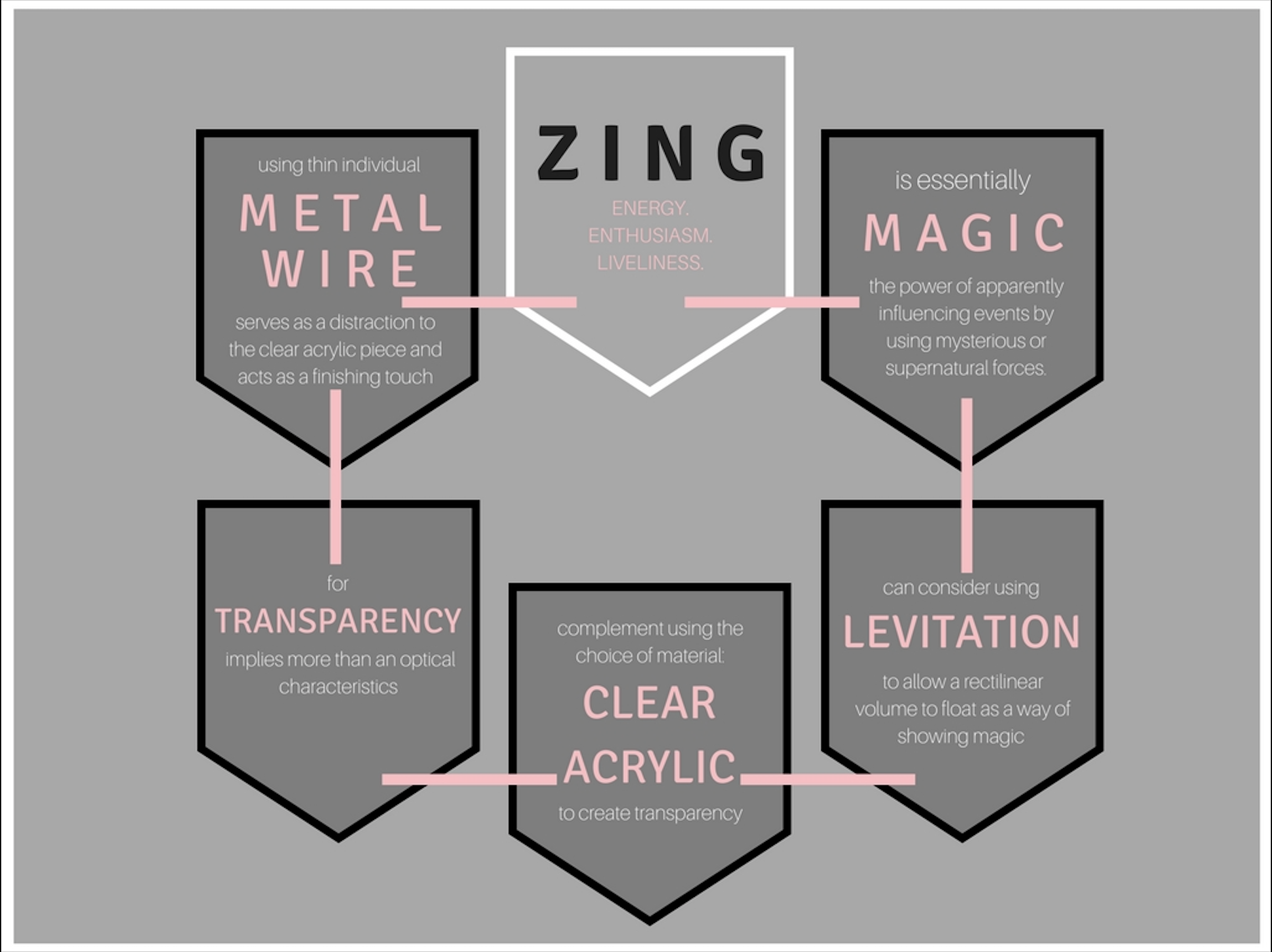 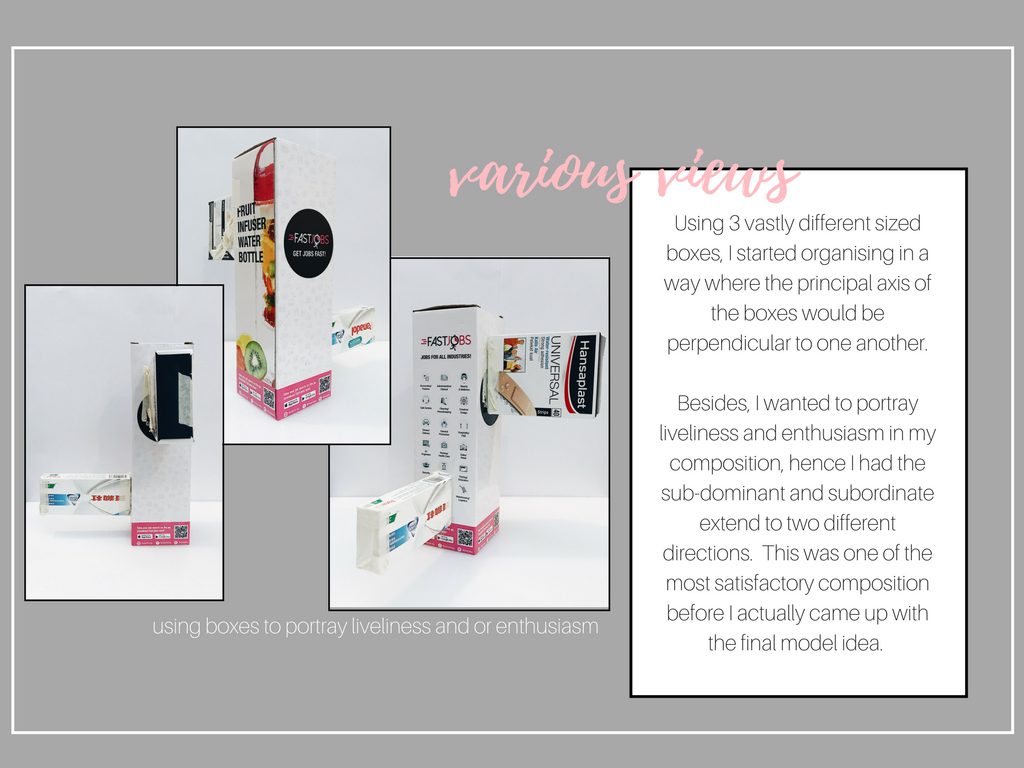 Using the boxes, I wanted to portray the initial definition of Zing that I googled. As the definition states, Zing meant liveliness and enthusiasm, hence I had the sub-dominant and subordinate extend outwards to two different directions. I was also toying with the idea of using colours to further create liveliness in the composition.

Nevertheless, this was one of the more satisfactory composition before I actually came up with the final model idea.

In the below, is the 3D sketch of the model.

With the sketch model of the final model settled, I went ahead to estimate the rough measurements for the actual model.

It took me a total of 10 hours with a whole lot of wrong calculations, measurements, wastage of materials and several cans of coffee to complete the final model.

Dominant – Broad structure made of foam

First, I went to mark the various measurements on the foam in accordance to the sketch. Once done, I went ahead to cut the foam using the foam cutter in the 3D studio. Sadly, my technical skills failed me as I did not manage to cut the foam to the measurements as marked. Nevertheless, I did some re-adjustments and successfully cut out the foams to the new measurements.

Thereafter, I went ahead to cut the metal wire according to the height of the structure, with an additional 3 cm of length factored in for the piercing to take place. Once done, I started coating the entire structure (dominant) with black coloured paper and the small foam piece (subordinate) with silver coloured paper. That took the most amount of time.

With the structure all coated in black, I began piercing the metal wire to the top and bottom of the structure. I repeated this step till the four sides were pierced with the metal wirings. With that, concludes the entire making of the model.

The final model turned out to be slightly different from what I expected. This was due to the fact that I failed to take into consideration of the choice of materials. 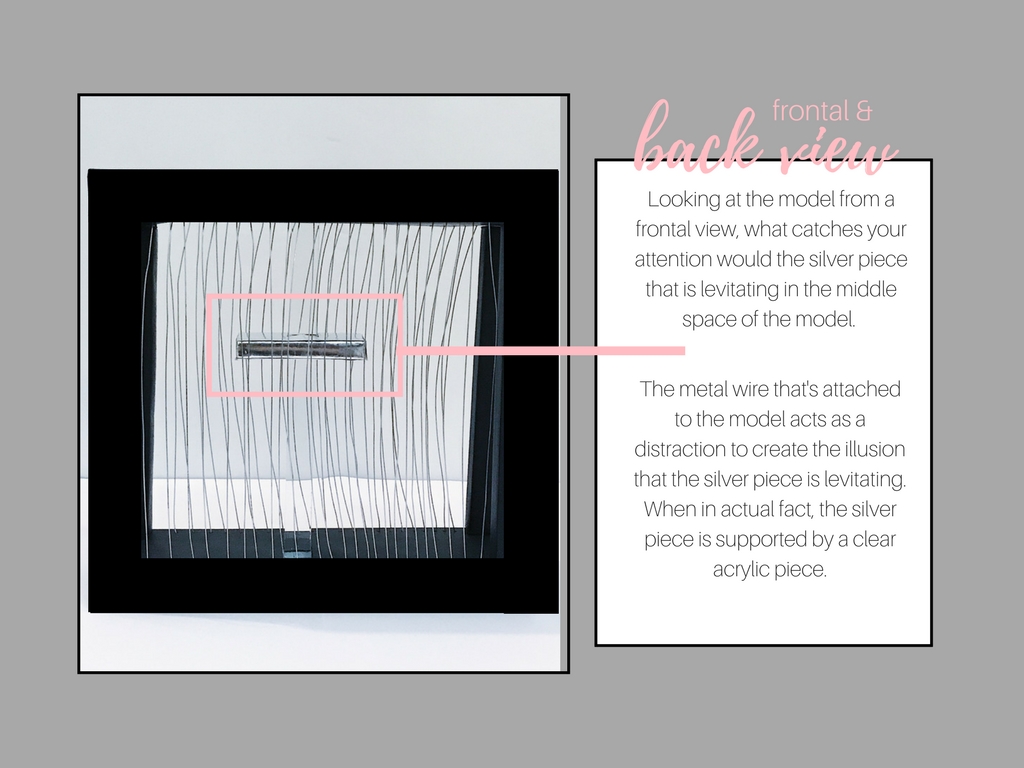 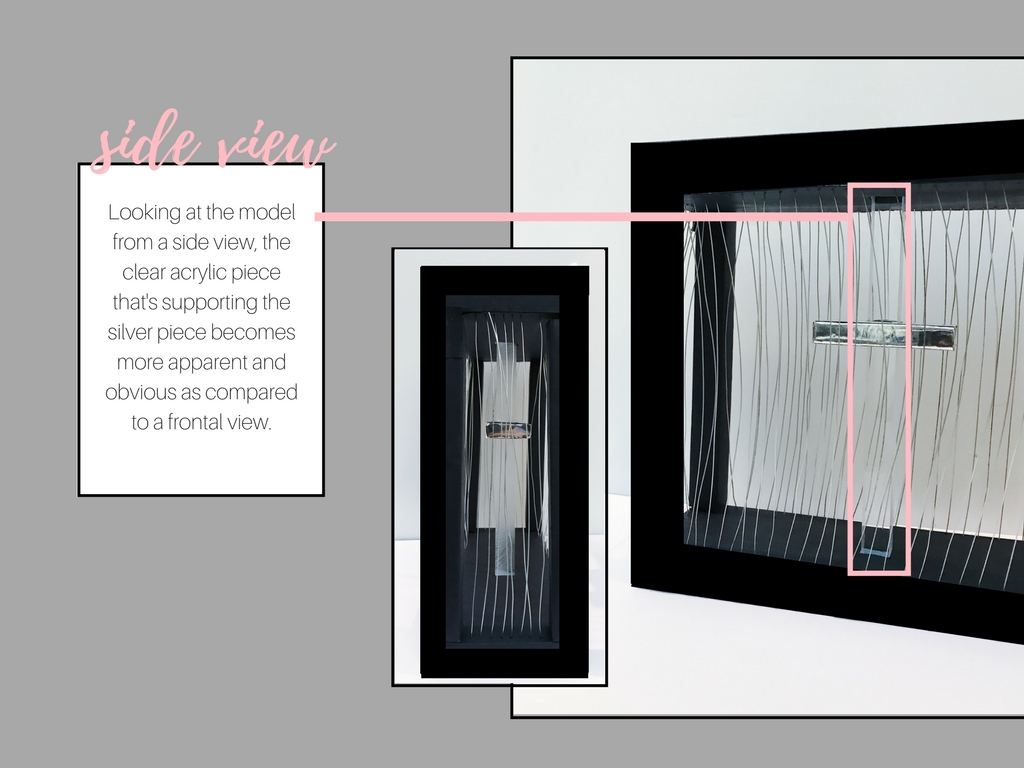 The macro-application of my model would be a bird cage. This is mainly due to the rectangular structure and the metal wire that’s pierced into the structure.

The micro-application of my model would be an earrings holder. If you tilt the model sideways, the metal wire would form a horizontal support for the earrings.

That’s about it for my final model!