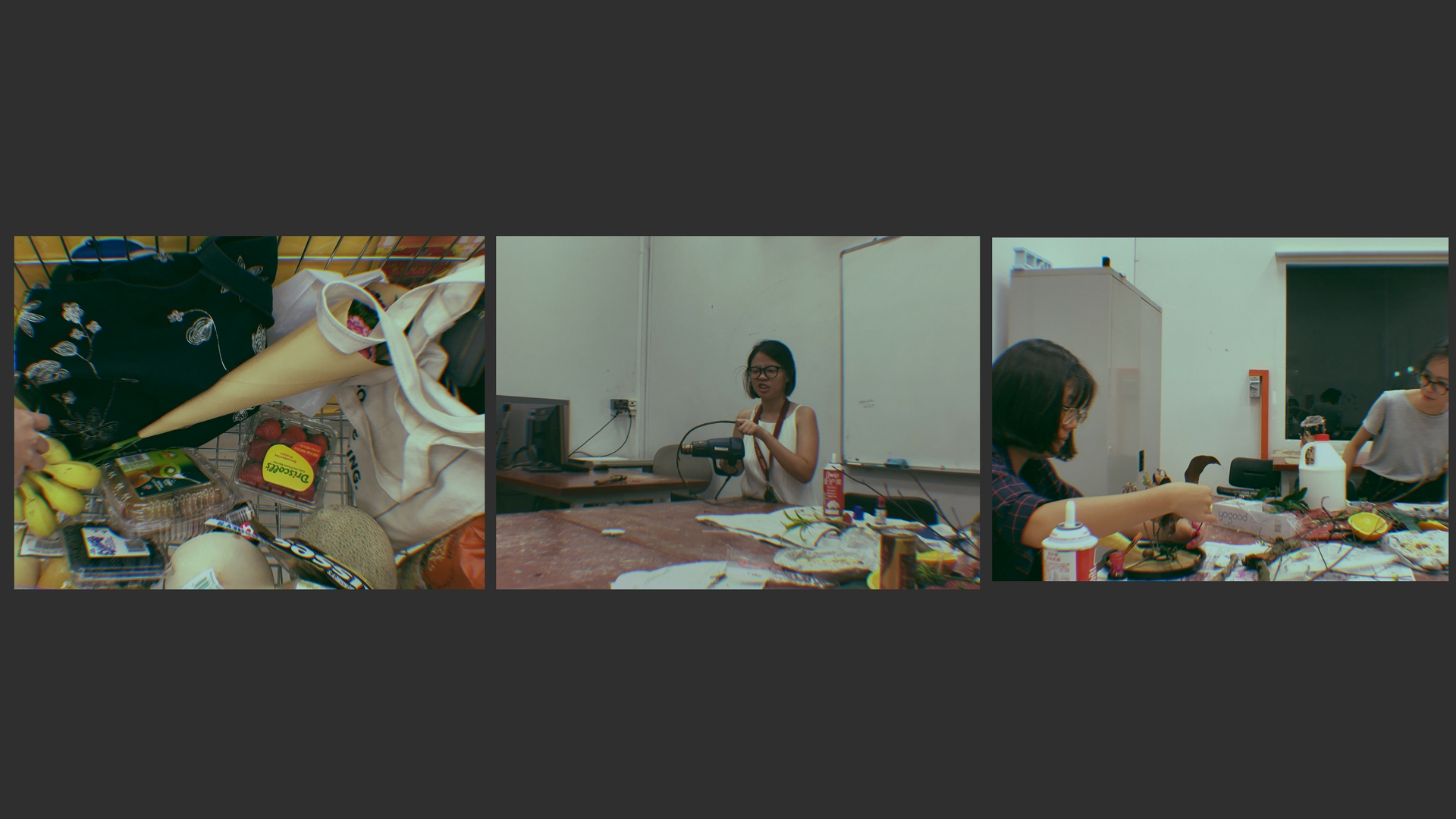 This post marks the end of the second foundation 3D project – Gaia’s Ikebana. 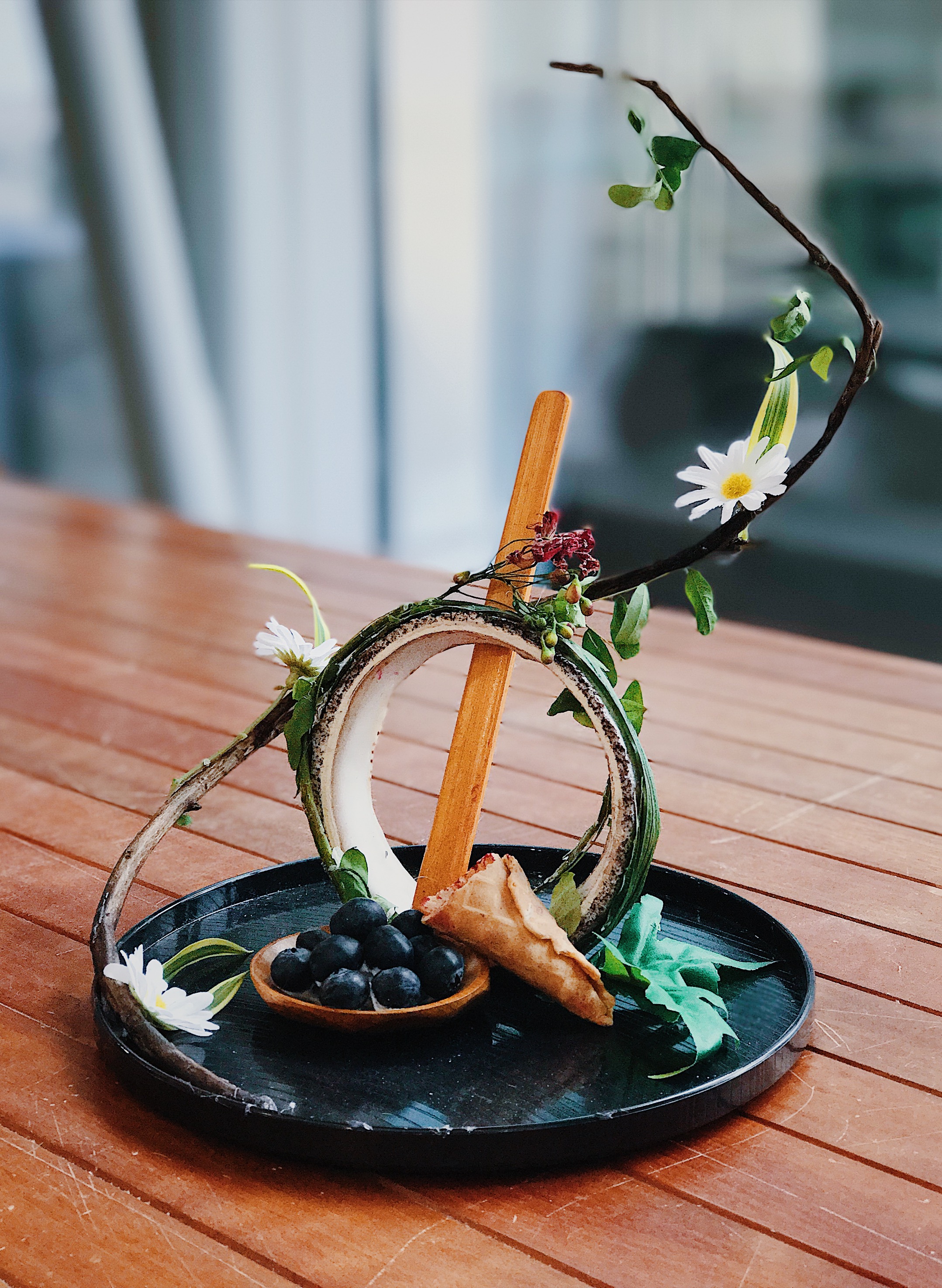 This post will be written in the following sequence:

Brief Overview of the Project

For this particular project, we are to create a 3D sketch model that composites of curvilinear volumes with the given theme – Ikebana. To twist things up, our final model are to be prepared using ingredients of the chosen season. 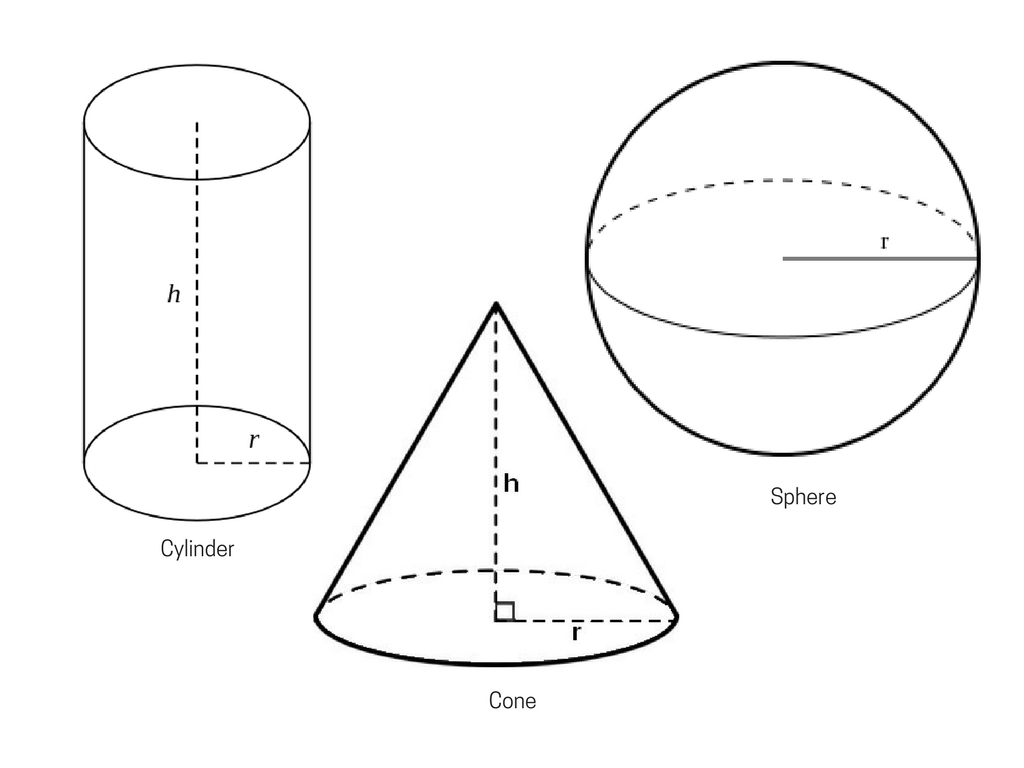 Definition of Curvilinear:  Contained by or consisting of a curved line or lines.

Besides, we are to create a balance (dependent, independent and precarious) of directional forces from every position. In short, the composition should not look flat from any vantage point.

More than just a decorative piece, Ikebana is a spiritual process that helps one develop a closeness with nature and merge the indoors and outdoors.

Likewise for this project, we had to worked with a particular theme, or rather season, in relation to Ikebana. With the reappearance of the pandora box, we had to pick out a slip of paper with a given season written on it.

I sighed in despair when the word “Summer” was written on the slip of paper. Reason being, summer is considerably a bright and exciting season in comparison to the other 3 season. Being a monochromatic person, I generally lean towards dark and dull colours. Hence, I went full on with my research and in the below, is a consolidation of my findings.

Falling between Spring and Autumn, Summer is the hottest of the four temperate seasons. Weather in the summer grows warmer, and in some areas, the heat translates to drier temperatures. In this hot and dry time of the year, many deaths are caused by dehydration due to the heat waves.

In this blazing hot season, most would associate bright shades of primary colour with summer. To give it a twist, I decided to go for a softer and cooler shade of the summer colours.

In the below are some colour palettes that I came across on Pinterest: 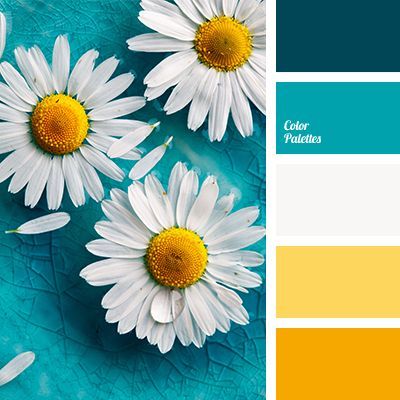 I particularly adore the off white and antique teal colour to which I added into my final model. Apart from it being a summer colour, I feel that it compliments with the Ikebana theme that revolves around minimalism.

To a certain extent, the season or more specifically, the weather, does affect one’s mood. It is said that a higher temperature can bring a person’s mood up. This is in relation to the fact that summer being the hottest season, has an abundance of sunlight shining through during the season. Sunshine and fresh air are the perfect pick me ups.

Sports Nutritionist and health coach, Branch Mentore mentioned that, “Getting sunshine is one of the easiest and most effective ways to boost your mood. Your skin synthesizes vitamin D, which will boost your immune system and your overall health and sense of well-being.” 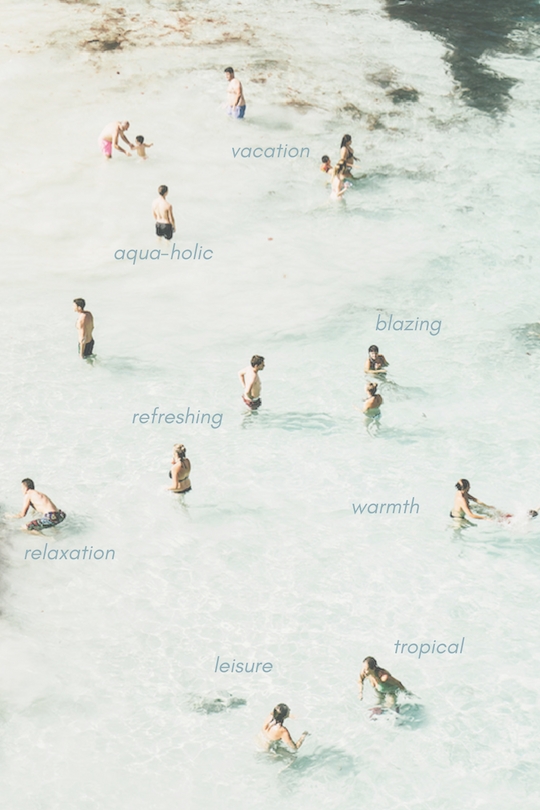 Mentioned in the picture above are several moods associated in the summer season. Amongst the different mood, I zoomed into “refreshing” and “tropical” where I tried to incorporate the said mood through the choice colour palette, ingredients and even the placement of elements.

Did some research and in the below are a consolidation of the must-have foods and fruits during the summer season. 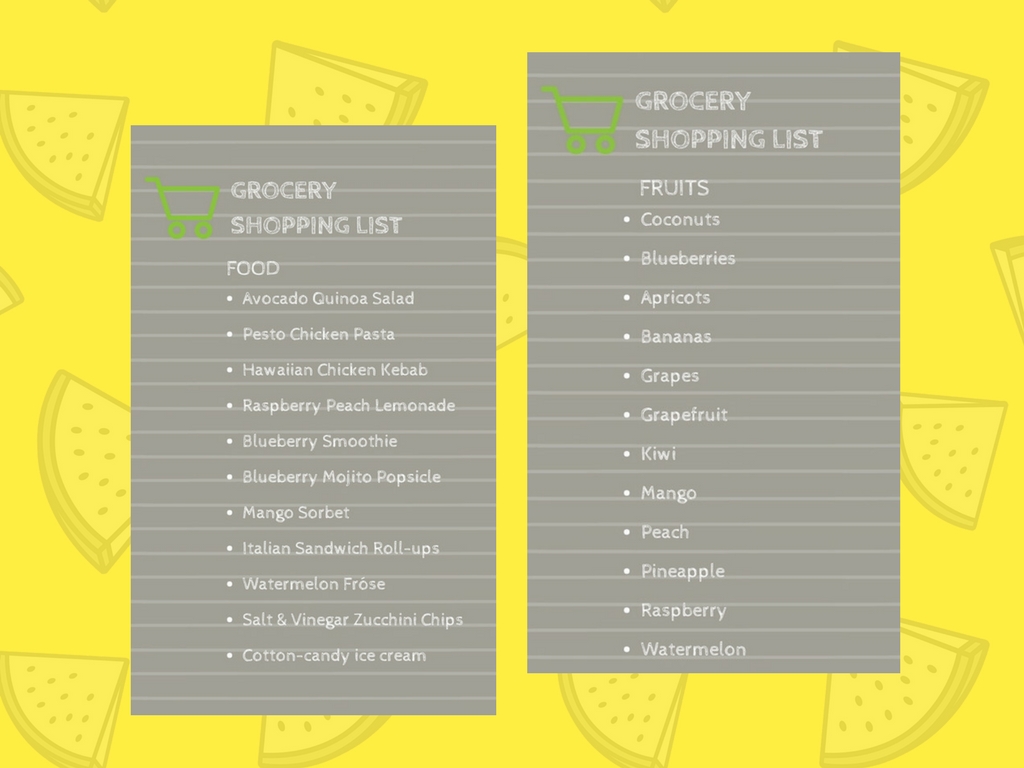 From the list, I actually used coconuts and blueberries as the ingredients for 2 of the elements. The choice of ingredients will be further explained in the analysis of the final model.

Plating, or food presentation is important as the way the food looks on the plate is what tempts our eyes and makes you want to taste it.

In the below are some references of food plating that I’ve found on Pinterest: 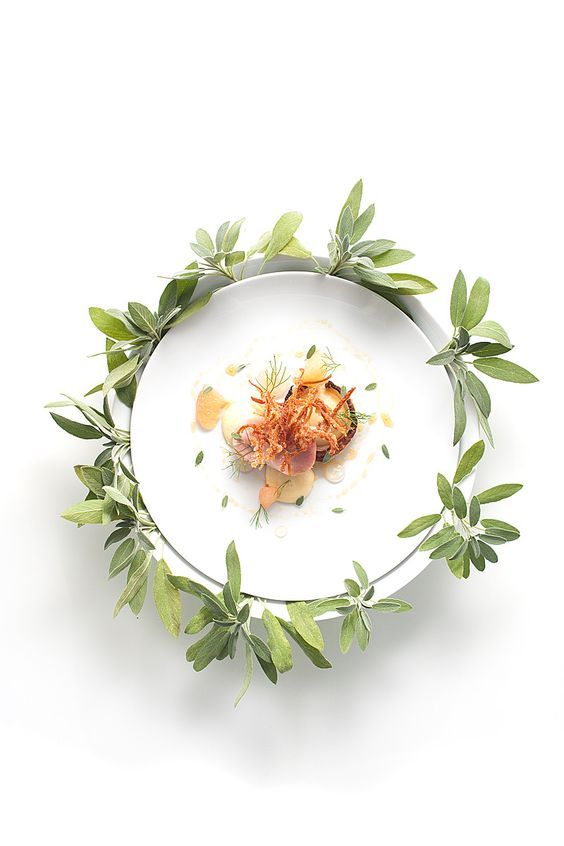 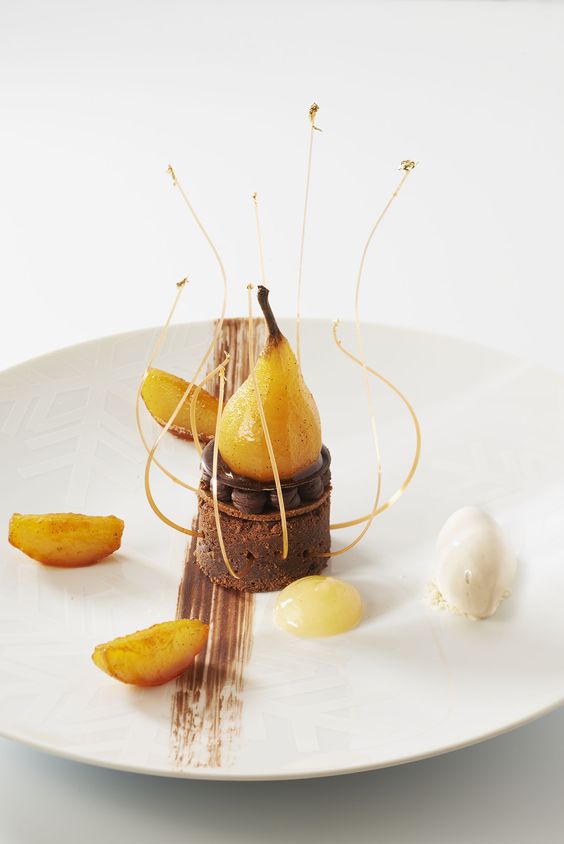 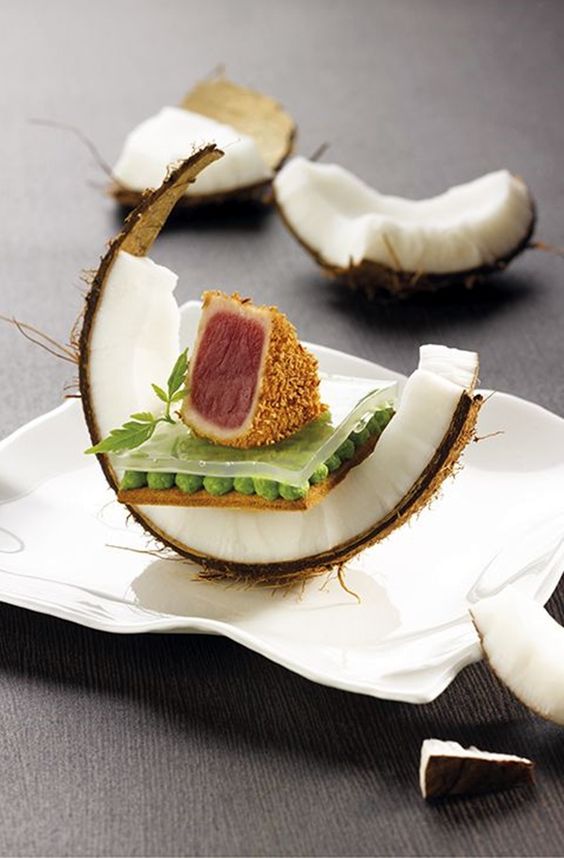 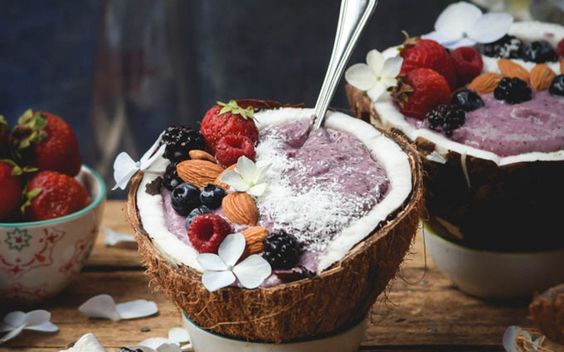 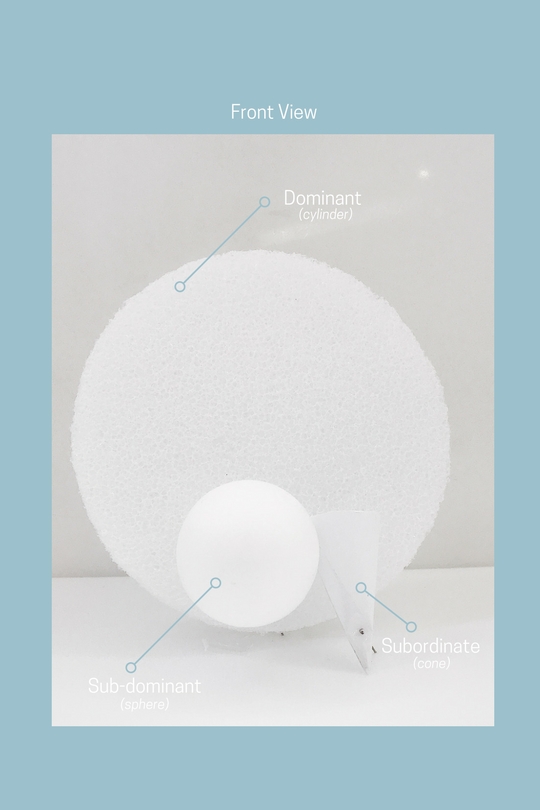 As seen in the above, the overall composition of the sketch model is pretty simple. I tried to create a balance within the 3 elements where the cylinder (dominant) is independent on its own, with the sphere (sub-dominant) being dependent on the cylinder for support and the cone (subordinate) being precarious where it seems like it’s independent but is in fact supported by the cylinder. 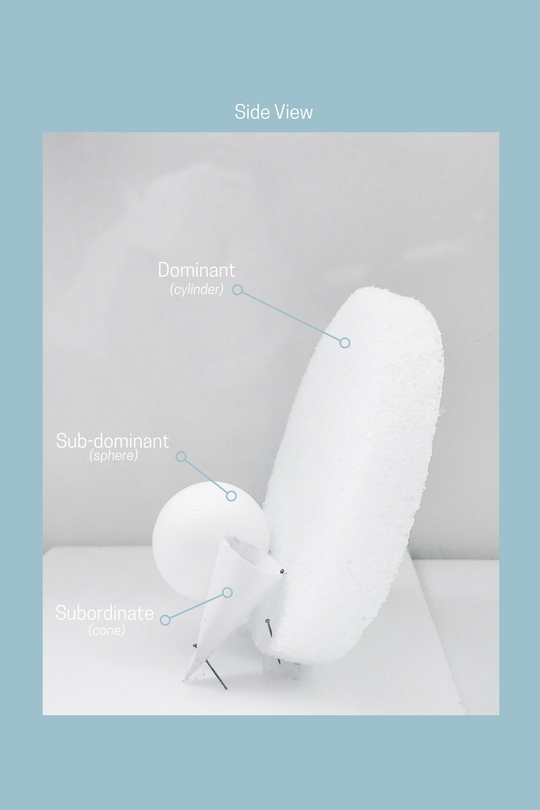 From the side view, it’s much clearer how the 3 elements are supporting each other, creating an overall balance with a slight tension in the composition. 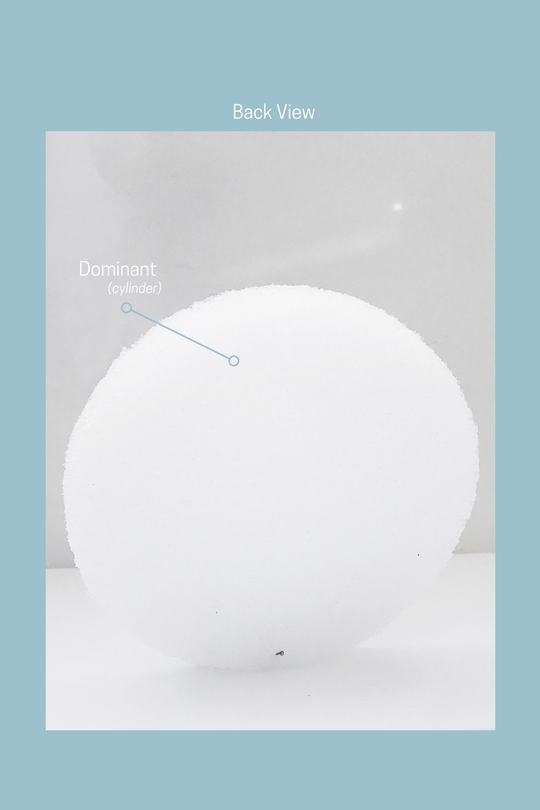 As seen in the above, the cylinder (dominant) is the only visible element from the back view. I knew that I had to make changes but because I was rather satisfied with overall sketch model, I figured that if I created a negative void within the cylinder, it would create a more dynamic composition where the other 2 elements would still be visible from the back view. 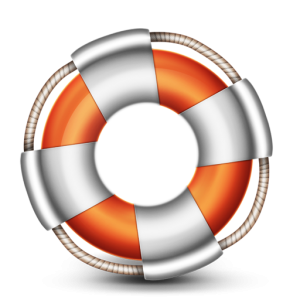 Besides, it would look like a life tube, that could be found at the beaches, creating a relationship with the summer season.

Moving on, I started brainstorming on the different ingredients and materials that will fully exemplify the theme. With much research, I came up with this list:

Presenting to you my final model which took me a good amount of attempts  in trying to bend the branch and countless blisters from using the hot glue gun. 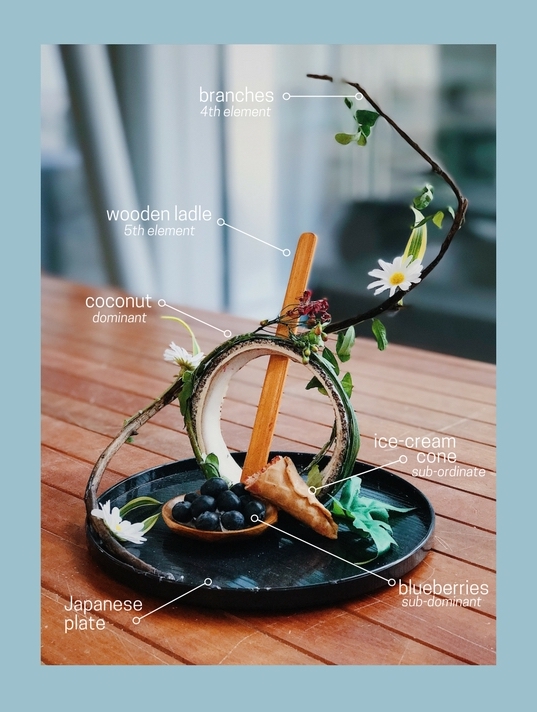 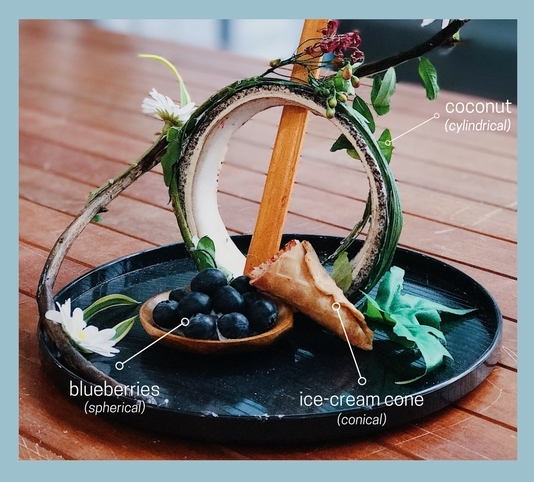 Starting from the bottom half of the model, you will notice the 3 main elements (sphere, cone and cylinder). The main reason why I chose these 3 ingredients to represent the elements was solely in relation to the concept I came up with:

Summer being the hottest season,  has seen many staying indoors to avoid the blazing heat. What better way to combat the heat wave with a cone of refreshing and cooling coconut ice cream topped with blueberries.

Instead of using an entire coconut, I figured that it would be better for me to create a negative void within the coconut. This would also allow the other elements to be visible from various vintage points.

Besides, I chose blueberries as it is seasonal fruit in the summer and it provides a citrusy taste, complementing the cool and refreshing taste from the coconut. Not forgetting that blueberries come in bite-sizes, hence it doesn’t take away the focus from the coconut (dominant) even though I placed a handful of it.

Moving onto the cone, I down-played the size of it as I didn’t want it to be the main focus. The main idea of the cone was to complement the blueberries and coconut, providing a nice finishing touch to the model. Also, the wooden ladle and cone are of the same colour scheme, hence it doesn’t take away the focus from the blueberries. 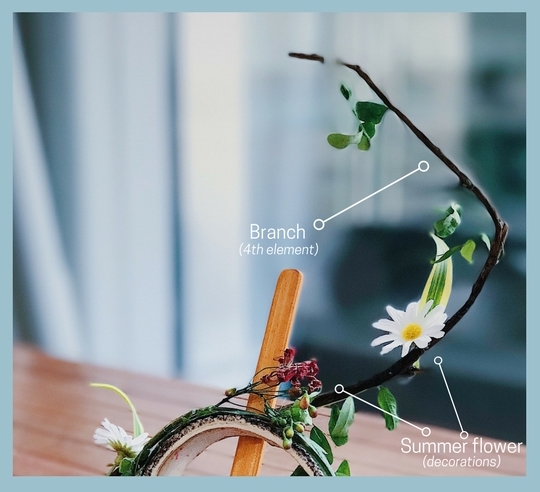 Moving onto the top half of the model, your eyes will drawn to the branches that spirals around the model. The idea behind the spiral effect was to create an illusion, somewhat like a staircase. When descending down the stairs that’s adorn with loose leaves and summer flowers, you’ll be enchanted by the tropical vibes. When descended, you’ll be greeted by a ladle filled with blueberries and so on.

However, the branch itself was a tough nut to crack. It took me a good 2 hours to create the spiral effect with the help of Naomi. However, it took so long only because I was being impatient and I kept on bending the branch by force, which resulted in the many broken branches in the trash bin.

Nevertheless, I am pretty satisfied with the final outcome of the model.