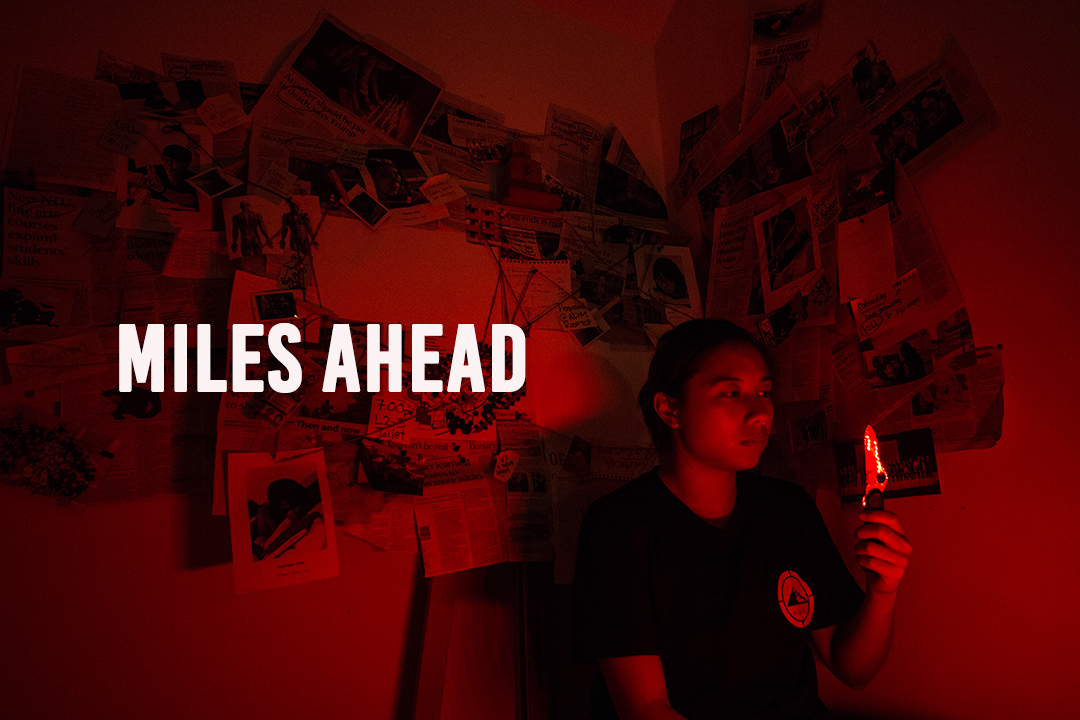 Hello! If you’re new (or did not see our installation),
please watch the trailer above 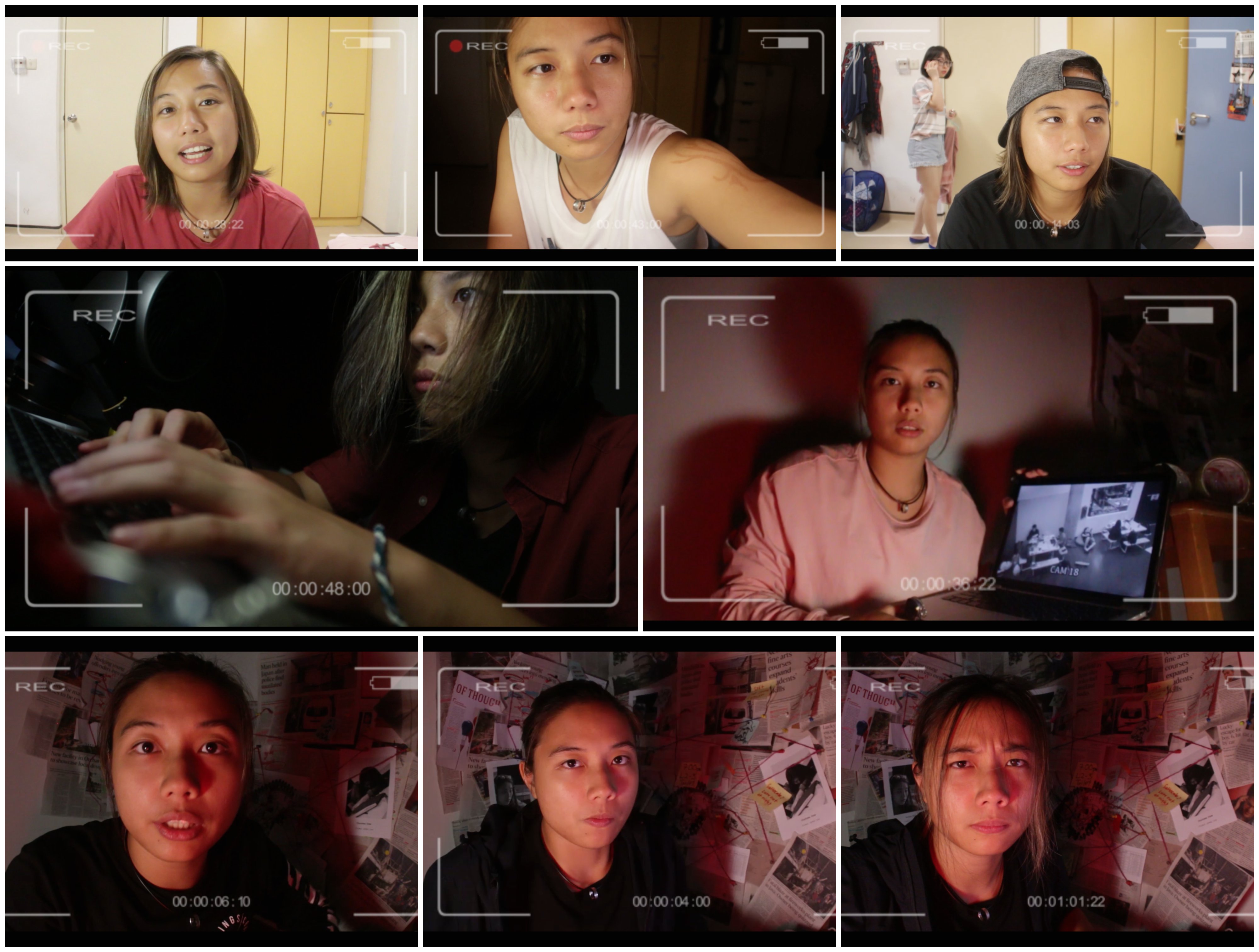 Hair, Make up and Wardrobe

The biggest key consideration in the art direction was development – we felt that it was important to see Miles’ spiral into psychosis from a cheerful and chirpy vlogger to a deranged and desperate student to a calm and calculated killer.  There were many considerations that went into showing this.

Deranged and Desperate Student – Initially wearing a cap as a symbol of hiding something (like gloves on Disney characters, really), progresses to a messy hair. She also removes shirt as a symbol of her ‘letting go’ of sanity.

Calm and Calculated Killer – Tied hair and now she wears a lot of black.

Another consideration for showing development is the use of lighting – from a bright, cheery day we see the gradual darkness sinking in (literally and metaphorically) into a dark mysterious room. Then back to an eerie bright day where Miles is seemingly alright, calm and collected, and then back into a darkness where she loses her mind.

From there the scene is slightly lit by red and orange lights to symbolize her dark state of mind, but since she still has grips to be calculative and analytical, we see a bit of the background. 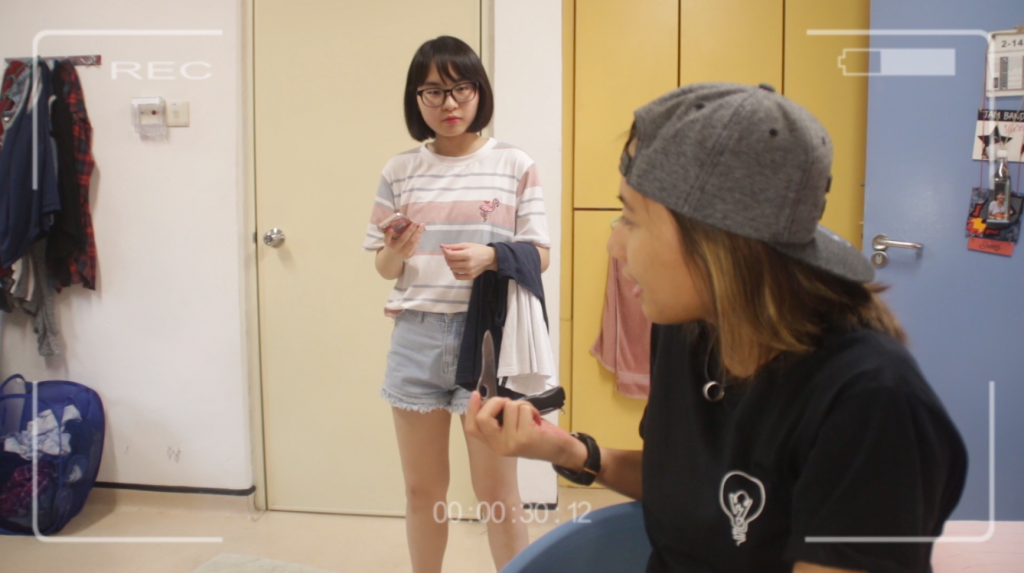 In post production, I added an overlay of a video camera to enhance the idea of vlogging with a running timecode and blinking recording light (what a doozy). I also added some minor color grading to mute the colors as though it has not been treated. 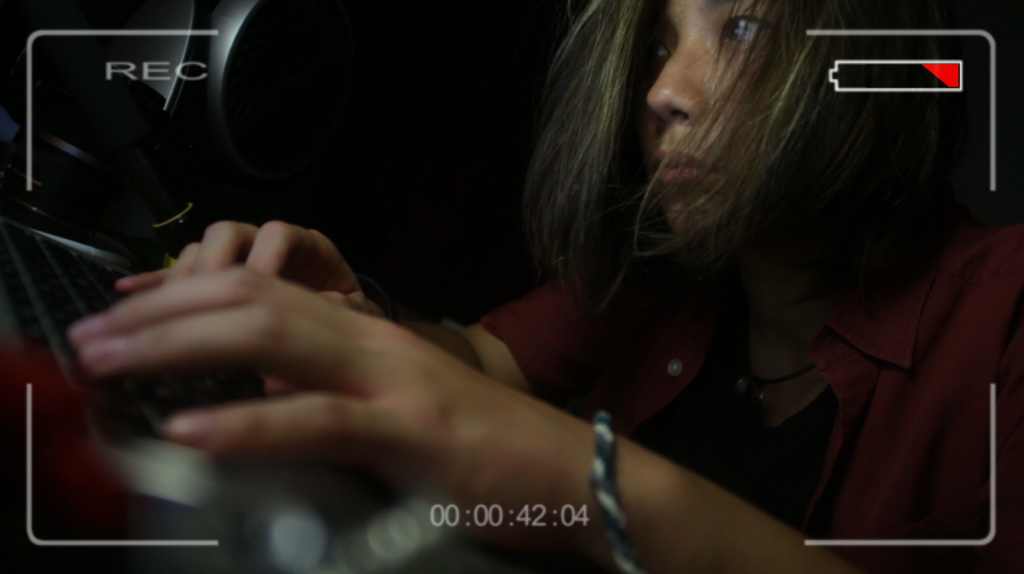 Perhaps one of the most subtle (but painfully worth it) change I made in this scene was making the battery blink red, it was to symbolize Miles snapping into her psychosis rage as she slowly drains herself of her sanity.

Some audio elements I’ve included were subtle background noises that hints to the state of mind of the character – if she is clear-headed and happy, we hear birds chirping, if she’s tired we hear crickets and if she’s losing her sanity we hear the buzz of neon lights and the hum of a compressor.  Perhaps one of the most distinct sounds was the door’s slamming that is metaphorical of her snapping into her psychosis rage. 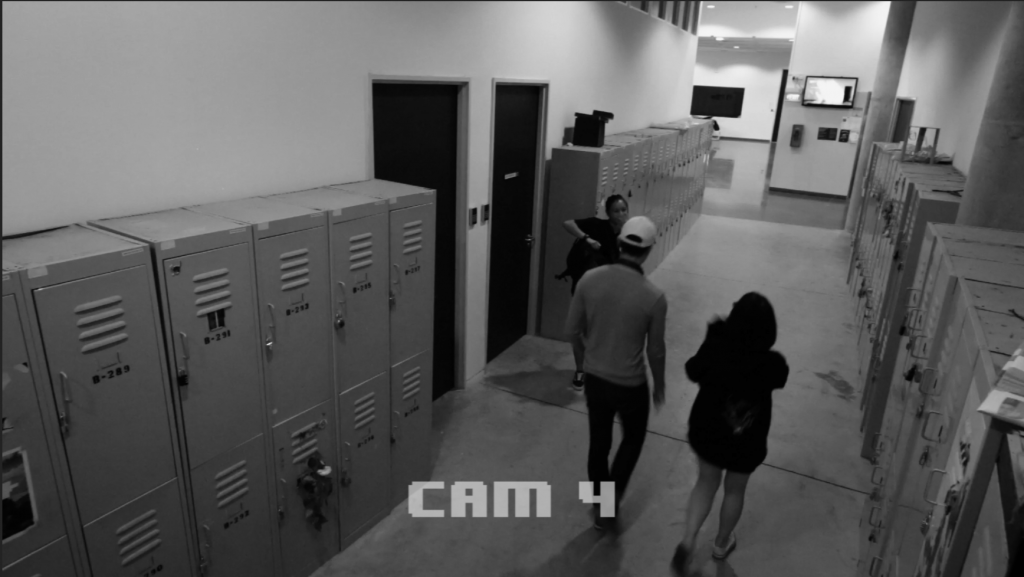 The treatment of the CCTV was minor – I desaturated the color, added a bit of grain and added a camera number to the scene. There were a lot of other elements I considered such as the moire/interlacing of the cctv footage, adding blur or even vignetting. But I chose to stick to the most simple monochrome, grain, and text as I felt it conveyed the idea of CCTV most simply and allowed details to be captured in the little actions.

In the murders, I created contrast between the two scenes by juxtaposing the chaos of the murder against the eerie stillness of the corridor. I felt the idea of helplessness was conveyed stronger through a subtle action of switching the CCTV footage to a quiet corridor to emphasize the drama of the murder.

It is also another subtle addition was the moment to moment aspect, with the camera static to show the passing of time. I held on longer for occasional parts to build suspense and abruptly cut on some parts to build a sense of mystery and discomfort in the viewer for the unknown.

During the consult, it was mentioned to not include the sound as it creates an eerie silence through the whole sequence. So yeah… I totally did that too.

The biggest challenge as an editor finding ways to allow the CCTV footage playing to support the moments in the scene – be it supporting the narration, supporting the emotion, or showing the inner state of mind of the character. However this was the best I could create a relationship between the two footages.

Firstly, I supported the narration of Miles being overworked with footages of students studying late at school. Intercut with the occasional empty, dark foyer of ADM to show the hour, and back to the studying studying.

Secondly, I supported the narration by also showing what was playing on Miles’ laptop as she loses her mind – utilizing freeze frames and zooms, we are able to see the little things that drives Miles into psychosis.

Thirdly, I show Miles’ transition into insanity by gradually altering the lighting between the CCTV footages. You might have noticed majority is shot in the night. This is motivated and planned as darkness is what clouds Miles’ mind as she falls into psychosis.

Fourthly, one subtle thing I added was using the CCTV static to show Miles’ state of mind. When she trails off, switches topic or forgets what she is speaking about mid way we see the static play as though we lose the thoughts in Miles’ mind.

Lastly, as the assassinations takes place, we are given a view of Mile’s current hideout. Without the camera overlay, we are observing as though we are omniscient viewers who are looking at the space through an idle camera. 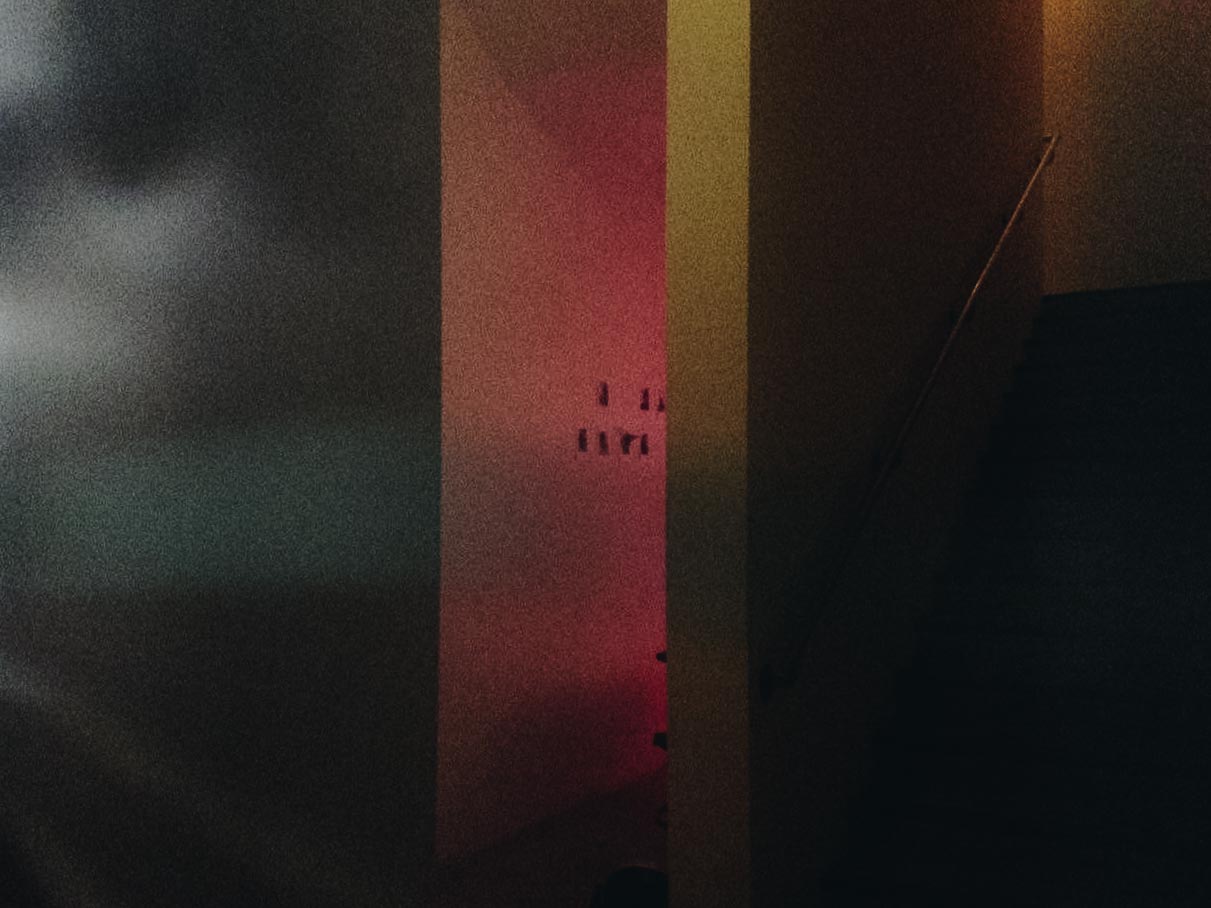 Before entering the audience is invited to observe the space through a glass opening in the staircase door. They will see the ominous red light as well as silhouettes of photographs on the wall.

Upon entering, the echo-y location will give a sense of discomfort and forces the viewer to be quieter. The viewer will then walk towards the red light curiously to discover the hidden space. 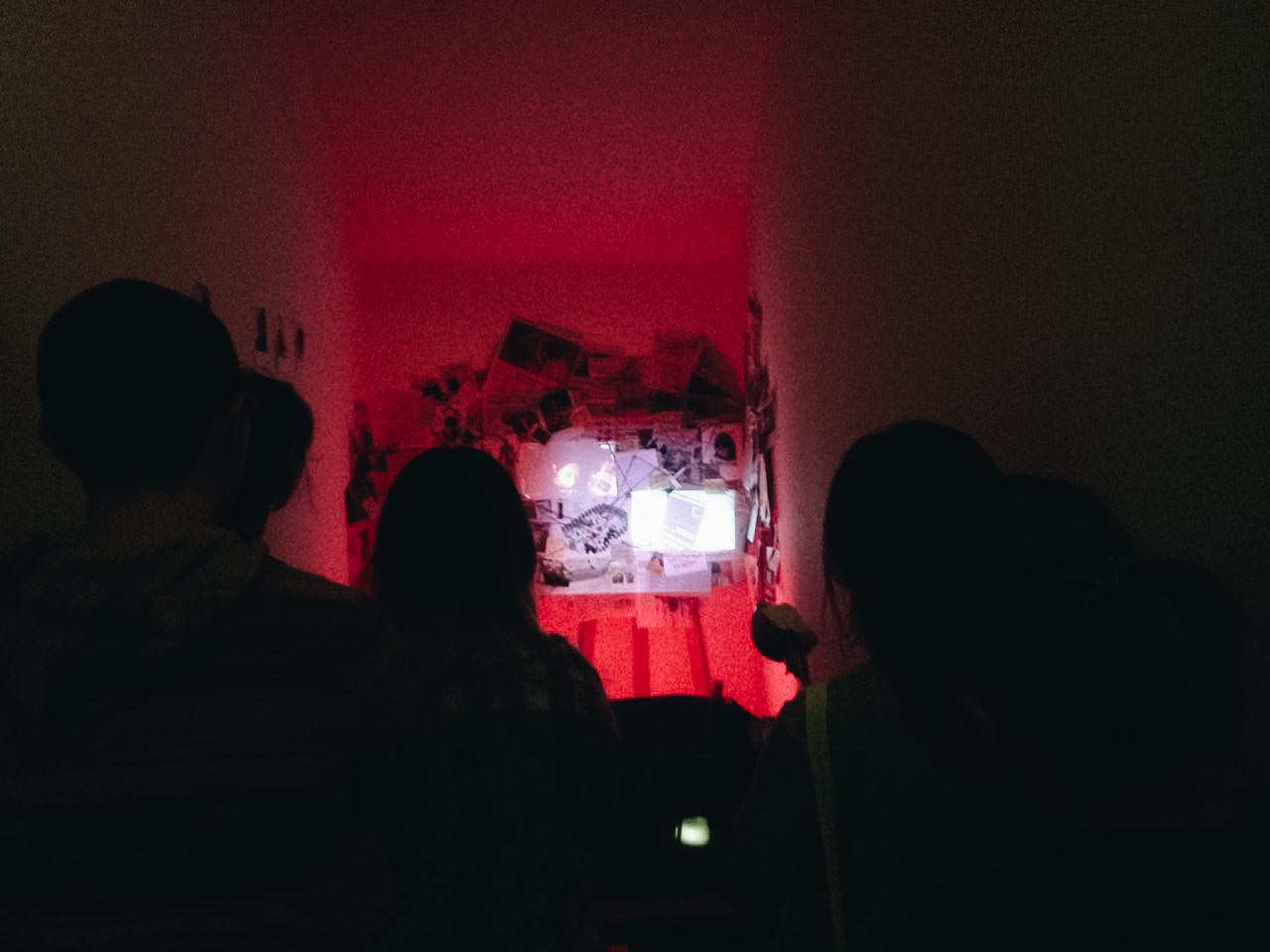 At the hidden space, through the use of lighting and scale, the viewer will first see the conspiracy board on the wall with strings and a spotlight illuminating the map. The viewers are then invited to play videos of Mile’s vlog or the CCTV surveillance footage in the sequence of their choosing to provide a mulit-linear narrative. 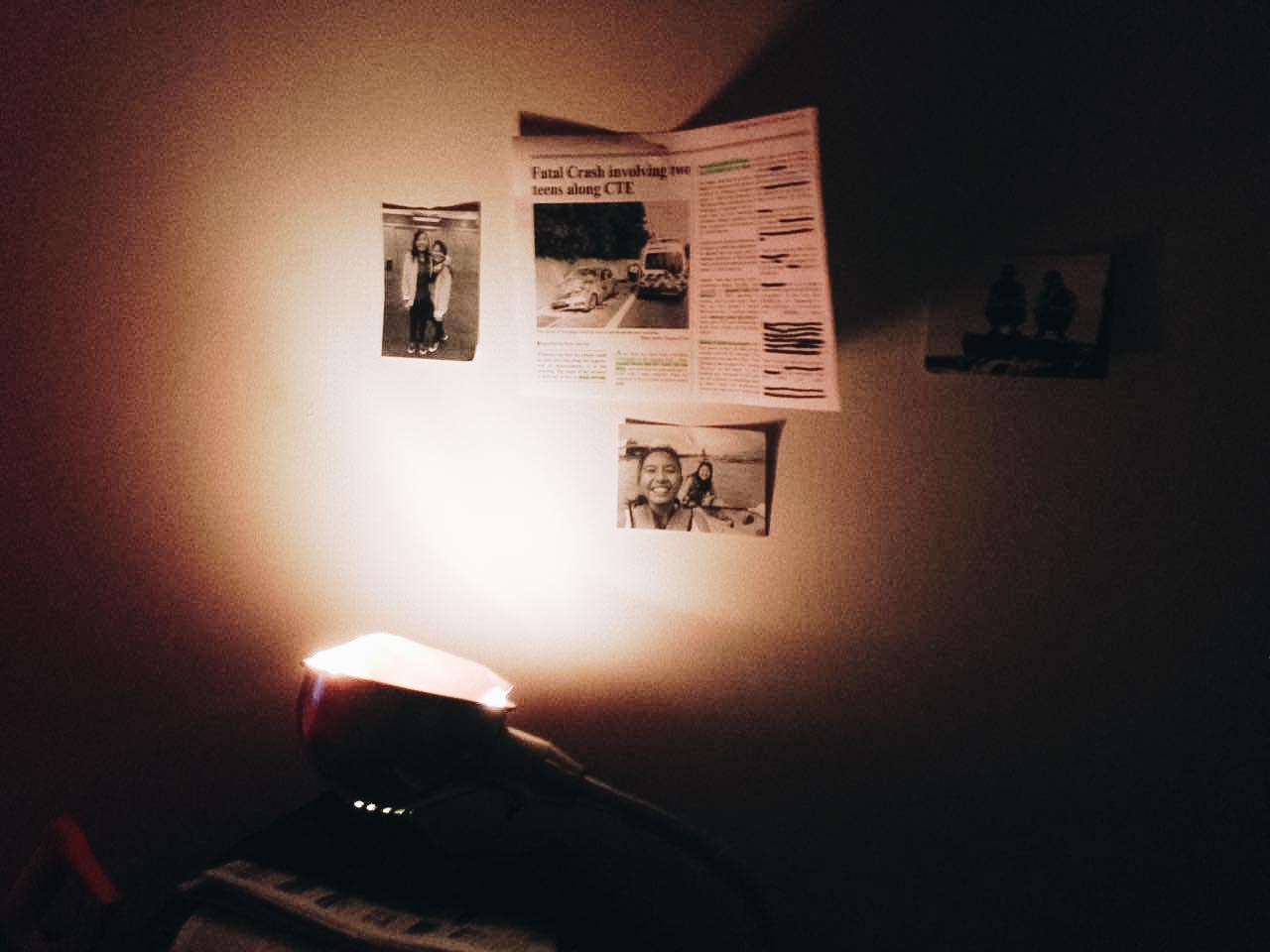 The viewers may then either interact with the photos and articles on the wall or look closer into the board. From the articles, the audience will establish the demise of Mile’s sister through the accident, and from the photographs establishes how deeply Miles misses her. 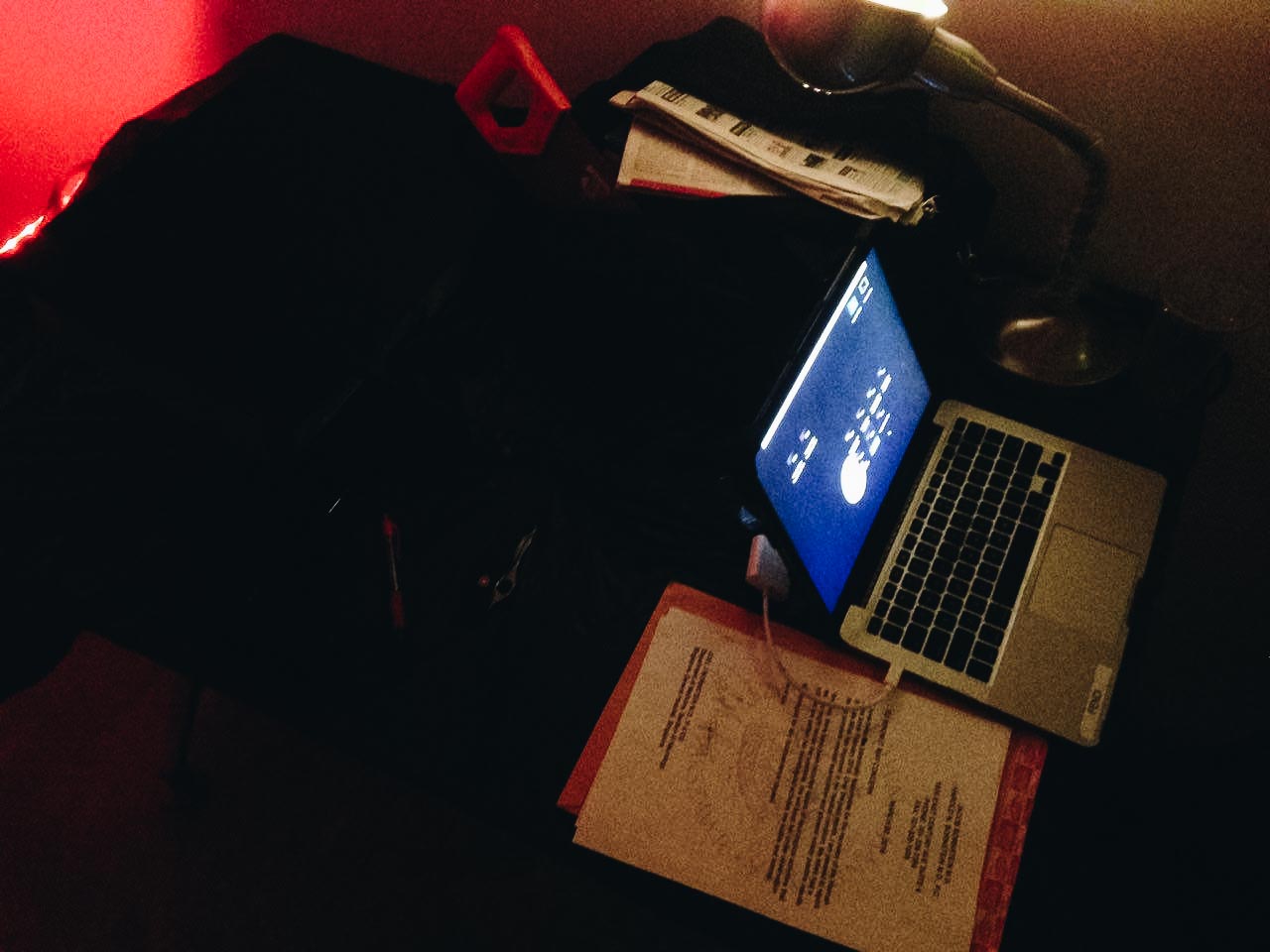 They may also interact with the items on the table such as the weapons or the medical documents. Through this we are given an insight of her psychosis and the extent of the damages from the accident.

You may see the articles, medical letter and medical report here
(4D Documents) 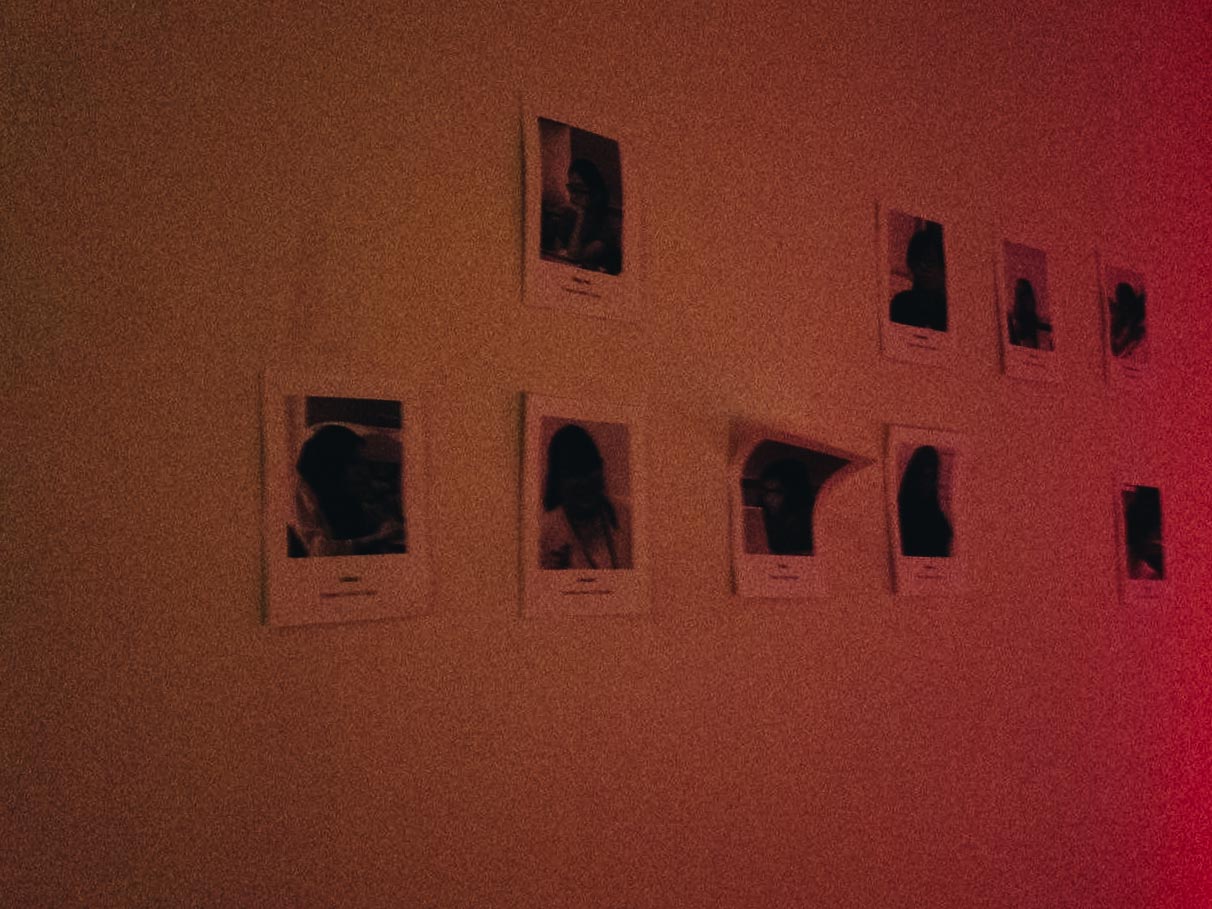 On the wall, the audience will see photos of themselves captured prior to the installation that provides a sense of personal touch to the the story, as Miles is amongst one of them. 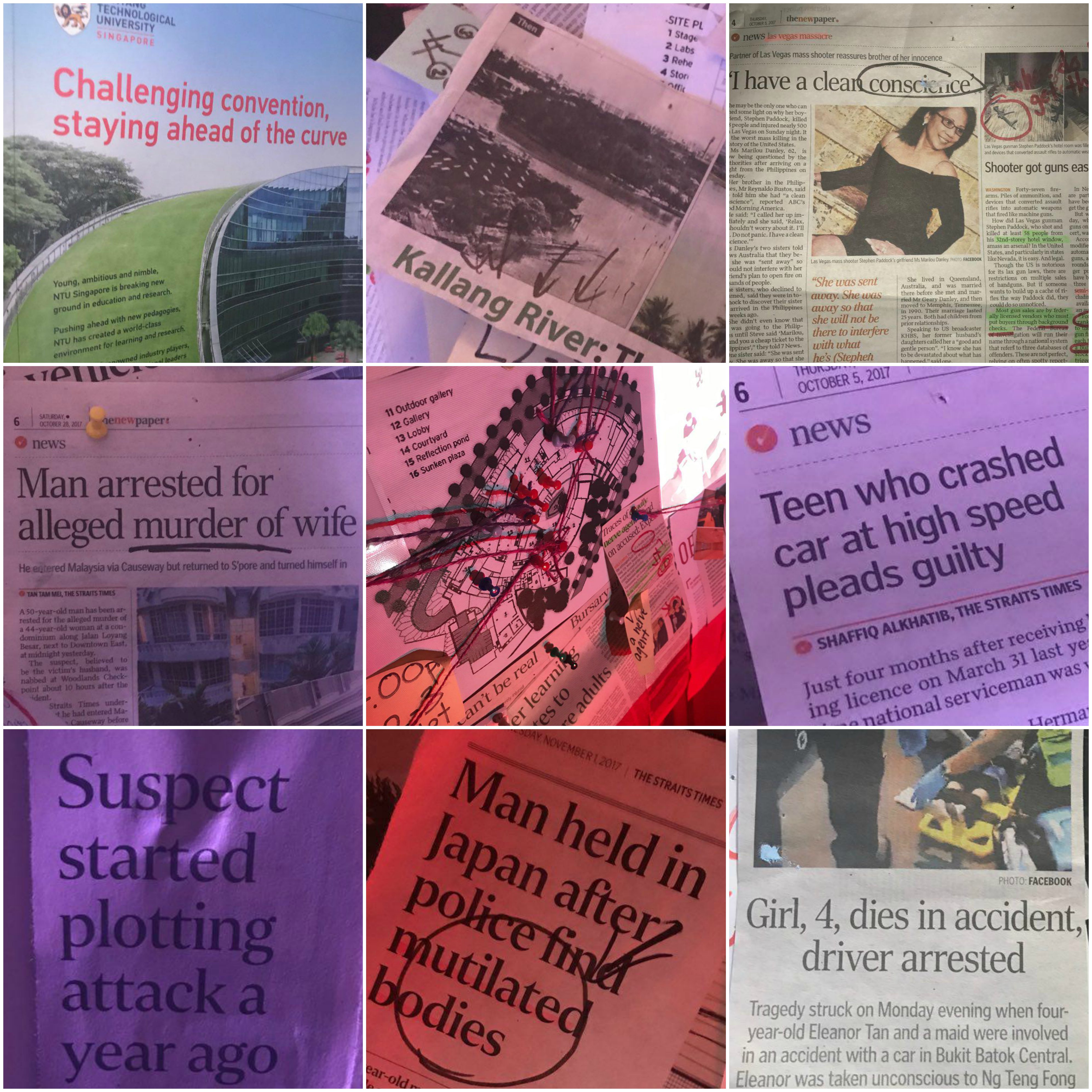 The viewers are also invited to inspect the articles on the wall which were painstakingly curated to give a deeper understanding of Miles and her research. It features academic articles, articles of murder and articles about accidents. From here, we understand deeper about Mile’s obsession with being the best in school and how thorough she is in her research to conduct clean, untraceable kills.

After the exhibition, the audience are given a deeper understanding of Miles.

WOW, WHAT A DOOZY OF EXPLANATION

I learnt the importance of character research in character-driven stories. Through understanding characters more intimately it is easier for us to sympathise whether they are likeable or unlikable. Characters are still, at a core, people, and people are filled with likeable traits and unlikeable traits. Through balancing this we have a more three dimensional character with clear goals, clear reasons to do things and clear reasons for behaving a certain way.

I also learnt about the importance of details – through sound design, colors, lighting, wardrobe, make up, props and editing we are given a more intimate understanding of the character just visually than through what the character does or say. Sometimes the strongest influence is something we are unaware about. Subtlety is the key to influence.

It leads back to the Johari window where we are given various parts of the character through space and form.

Okay, now it’s time for me to rest. 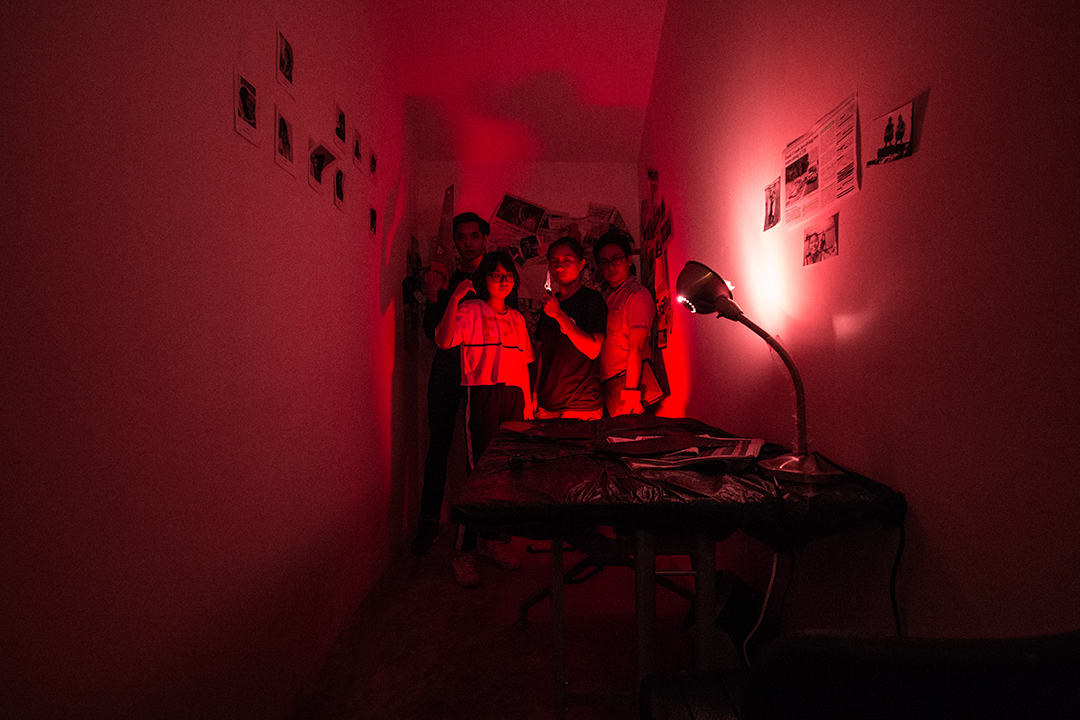 thank you ‘Miles Ahead’ team.

One Reply to “Miles Ahead – Final Installation”