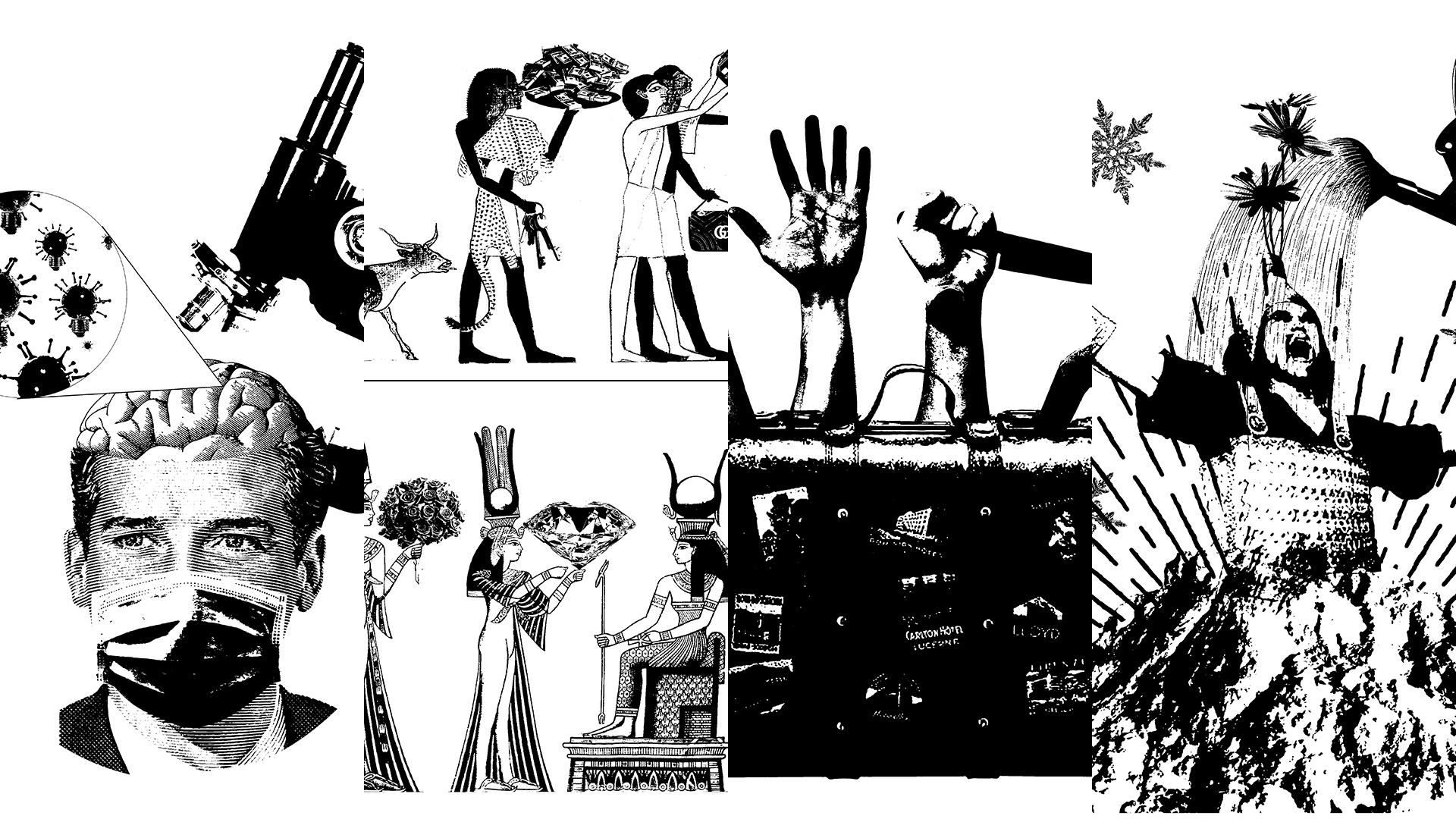 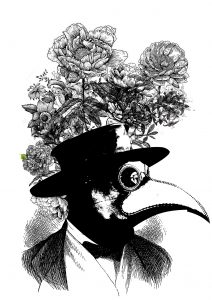 This was the very first design I thought up for this assignment. The plague mask represents virus and the flowers was the flow of creativity and inspiration (or the idea). I realized there was many flaws with it – it did not show the context of the film, the masked looked almost penguin-like and the flowers did not clearly show the idea of idea. I looked into being more literal, but I was very fond of the vintage/engraving-like look the plague mask had an kept it in my design. 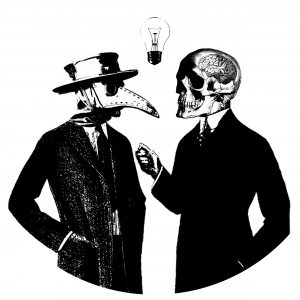 I kind of liked this composite at first – it spoke of a story of a decreased man by the idea plague ‘passes’ his disease onto someone else who is protected from the plague with his mask. But after consultation it was feedbacked that the image did not portray the idea of ‘idea’ or ‘virus’ clearly and was too abstract. So I had to re look the concept again. 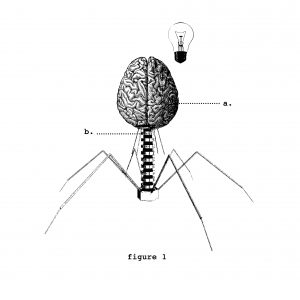 This idea came to me when I was in the bus and the boy next to me was reading his biology textbook. It showed a figure anatomy of a man and it was pointing to various parts of his body – heart, large intestine, kidney, and the sorts. I thought what if I explained this idea virus like a biology textbook warning the dangers of it. And thus, this image was birthed. However after consultation, it was mentioned that the virus looked like a Spider than a virus. So I had to consider how do I make it more virus-like. 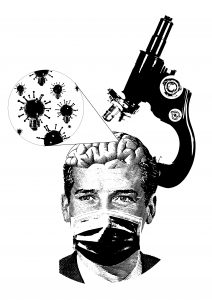 Idea four is a more literal design of the quote using more clearer semiotics such as a virus and mask to represent sickness and virus, brain and lightbulb to represent ideas. 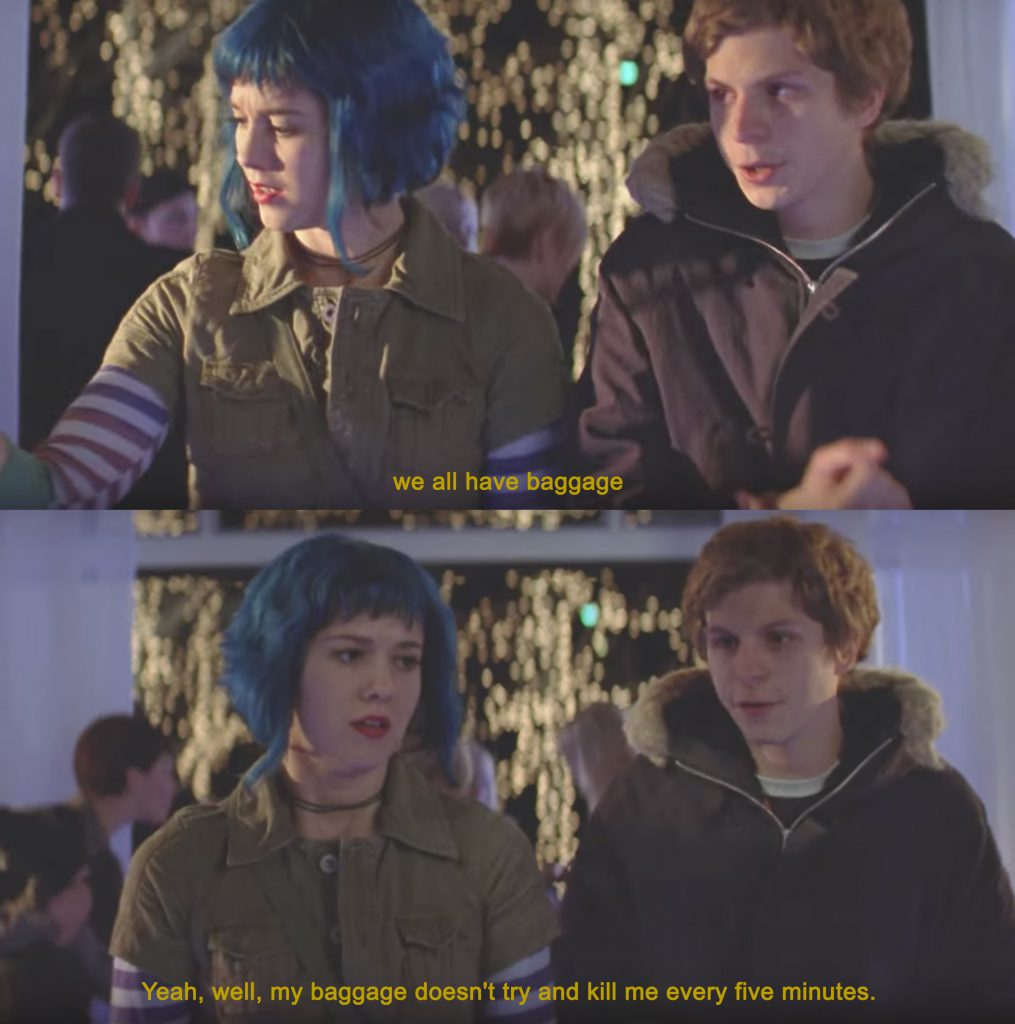 “We all have baggage”
“Yeah, well, my baggage doesn’t try to kill me every five minutes”
– Scott Pilgrim Vs. The World, 2010.

In the film, Scott chases after his literal and figurative dream girl only to discover her past 7 evil exes are all out to get her next boyfriend. When he confronts his dream girl about it, she explained that everyone has baggage, baggage refering to exes that weigh them down at their current point of life. So to show this, I packed all her evil exes into a suitcase. A relatively straightforward idea – and it shows what baggage is and what it was in the context of the film, I decided this lacked visual interest and sought the line after this one was said, and it was a humorous “Yeah, well, my baggage doesn’t try to kill me every five minutes” 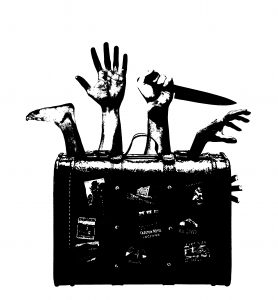 I added the element of killing in this concept, and having it face the front as it was a more simple and symmetrical image as compared to an angled suitcase.

The Room is one of the most painfully wrong and narrow minded film interpreting  the wants and desires of a woman. In the film, Lisa is given a dozen roses, expensive gifts, and a sexy (according to Johnny) red dress. Her mother also pressurizes Lisa to marry Johnny because he is rich and can afford to pay for many things in Lisa’s future. 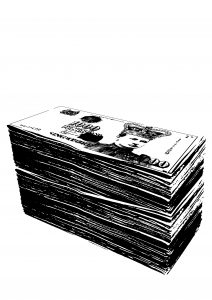 Initially, I was considering one of adding a local twist to it, and inserting a princess into our notes. I realized this ideas was too simple and it did not exactly convey the idea of ‘anything’, even if money can buy anything. After looking at it,  I decided to include more elements into the design as this felt a little lonely and simple. 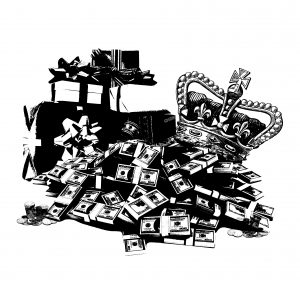 So to convey this, I considered about what were some other ‘typical’ things people associated to what girls wants, and if she’s a princess – the gifts had to be HUGE. I added the crown to convey the idea of a princess and wealth. I liked how the idea becomes more emphasized of ‘anything’: gifts, money and a new crown. However it lacked humour, and it gave the vibe of a deceased person showered with gifts at her funeral. So I thought – hey… deceased person … rich … reminds me of an Egyptian princess. 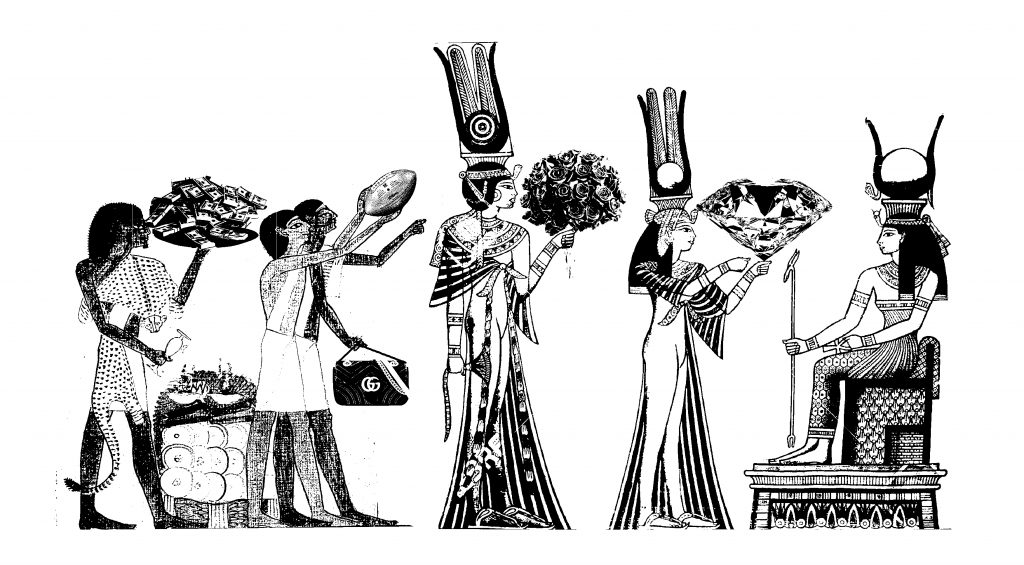 I really liked how this one turned out, it contained elements of Egyptian paintings and the gifts are replaced in a satirical way. I liked how this composition was different from the others as it was longer instead of squarish or tall and added a little variation to the design. Dozen red roses? Gucci bag? A huge diamond? ANYTHING FOR MY PRINCESS! However I felt this lacked the local flavour that I thought about it and started thinking about what would a Singaporean princess want? 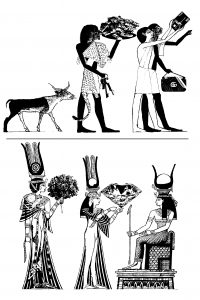 After cleaning up the lines, I included the 5Cs of Singaporean’s desires – Credit Card, Condo, Car, Cash and Country Club. I still kept the diamonds, flowers and Handbags as they stay true to the film’s context of superficial wants of women. As compared to the previous image, I cleaned up the areas where the texture is ‘dirty’, such as the three characters on top – they are a much cleaner white and a much cleaner black as compared to a grainy texture. 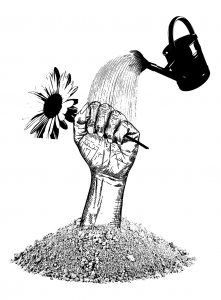 At first, I used a visual from the actual scene and thought about how I can incorporate the idea of daisies in a comical way (the quote itself is comical cause it compares them to Daisies). So I included a fist emerging from the grave of snow holding daisies. However I felt that lacked humour as it looks more vengeful than comical. So I figured, why not use the whole huns instead. 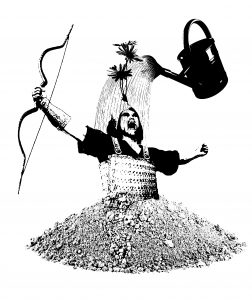 For this design, it is much more comical and there is a strong juxtaposition between the fearsome Hans and the delicate daisy. However it was feedbacked by a few people that the snow looked like soil and it could be more comical potentially, thus… 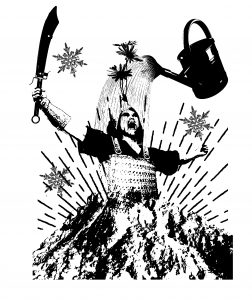 A much more comical approach was attempted. The comedic element comes from the humour in exaggeration. I added an anime-esque explosion at the back and make the snow less soil-like. However it was mentioned it looked a little too volcanic than snow-like, so i added snowflakes as a semiotics to  convey the idea of snow. 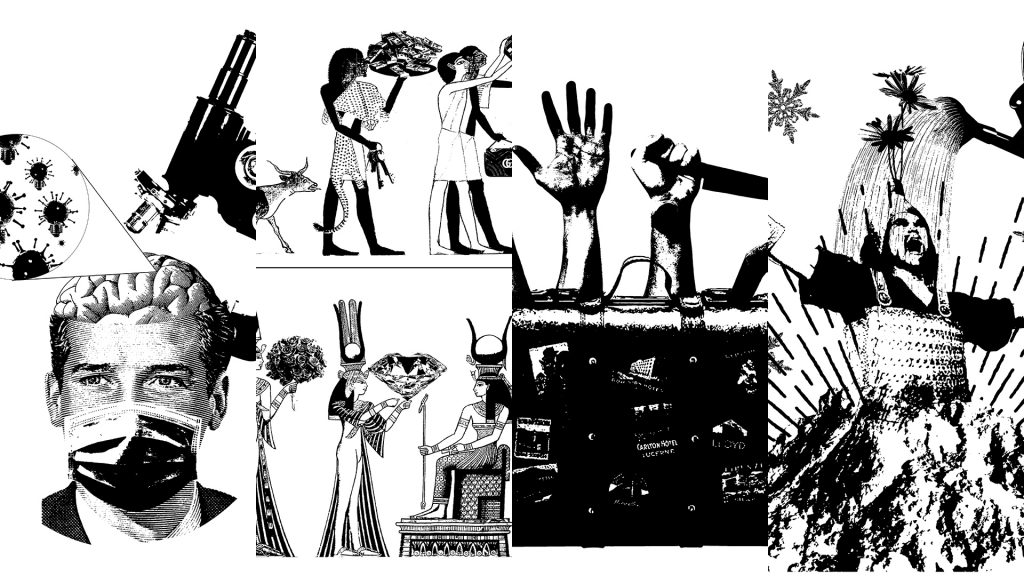 To see me tote design one, click here.
To see an in-depth analysis and research samples, click here.