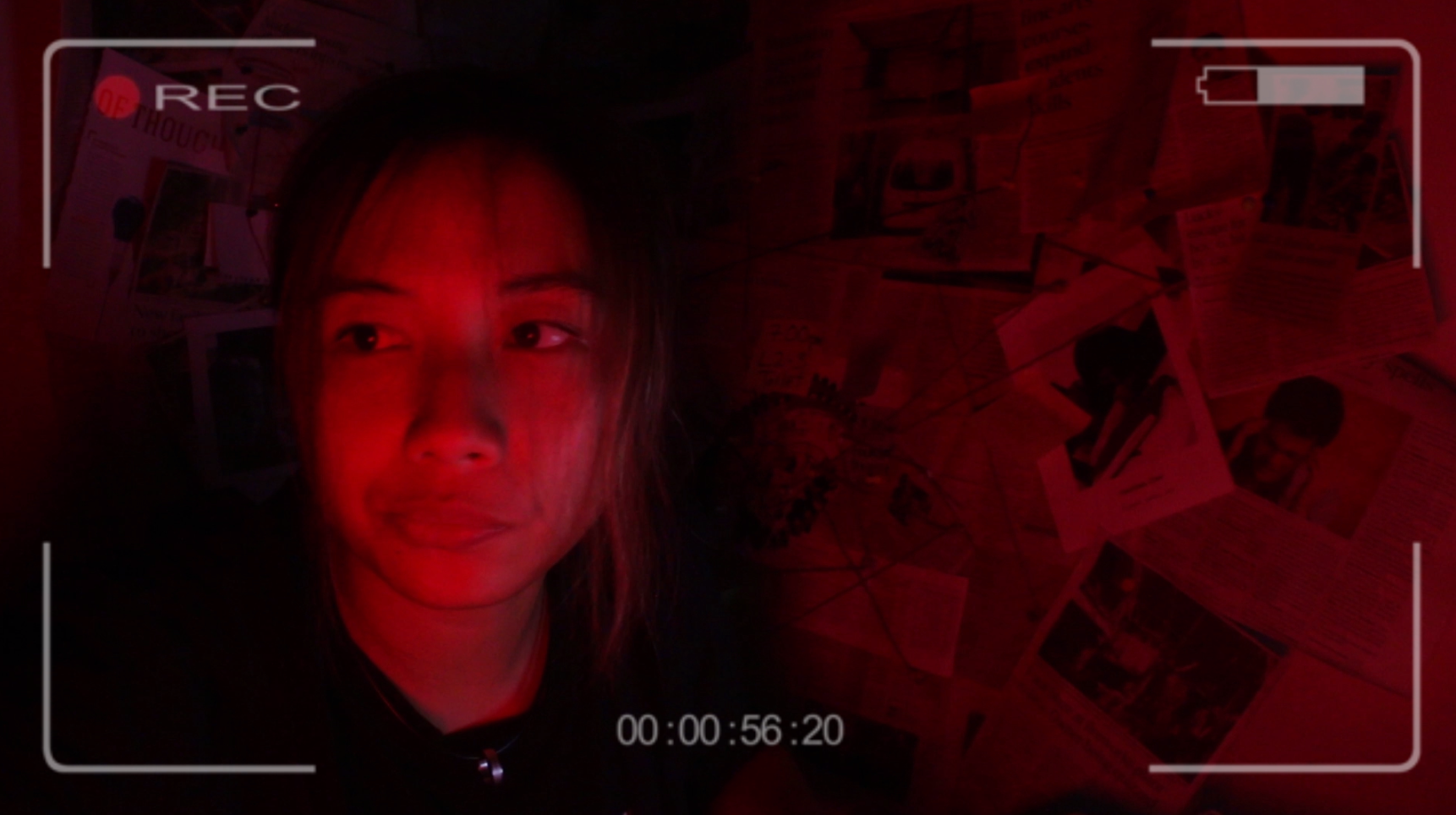 I was part of the team as a producer/director for this project. Together with the team, I directed the overall image, look, vibes, tone, theme, and sound of the project. I also was the editor.

I compiled my director’s notes detailing the acting, the visual and audio elements I planned to incorporate and tasked my talent, cinematographer and art director to convey this. Of course, they had many contributions to add and we planned all logistics before the shoot.

(this details all our considerations in the shoot) 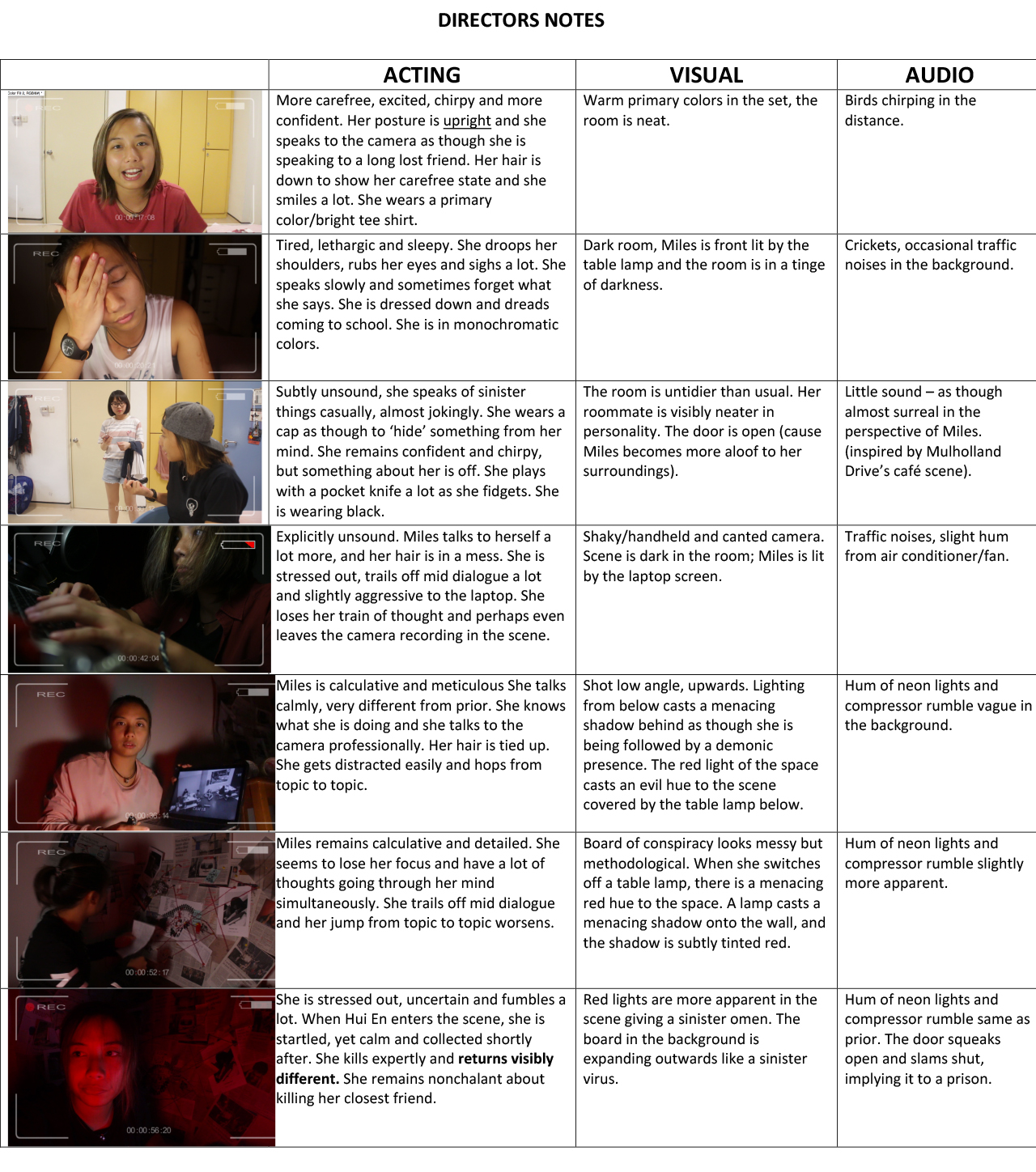 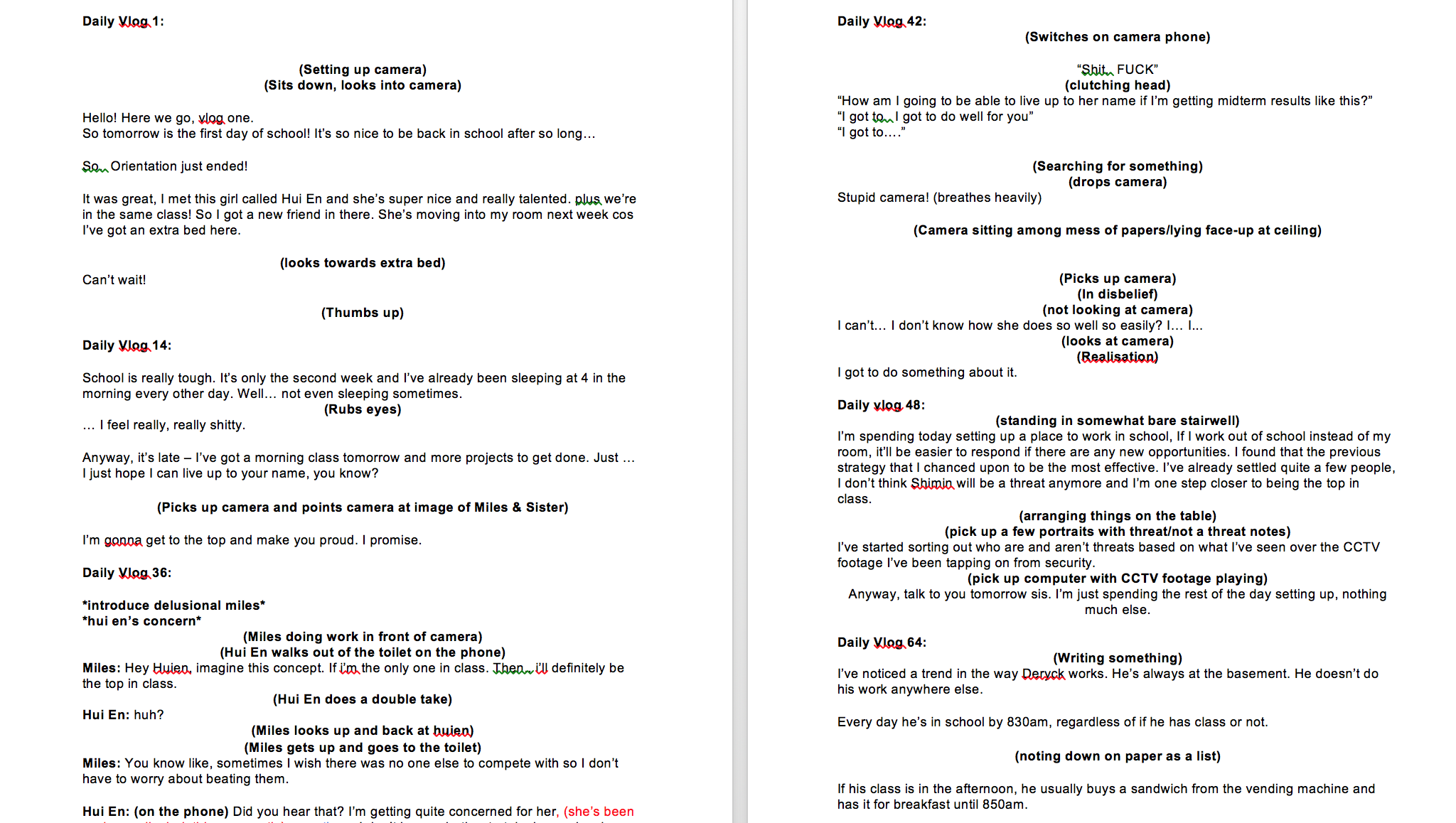 You can read our script here: Script

I worked with Hannah to get the script out (which she wrote majority of it). There were a lot of backstory to fit into the script and without making the vlogs too long, many things had to either be hinted, mentioned briefly or ignored altogether and put into the space instead.

We looked VERY much into the backstory of the character in order to achieve a strong sense of motivation in the character as we are dealing with a very difficult idea of sympathising with a unlikable character. She looked into Ed Gein, Ted Bundy and Aileen Wuornos.

More details on that will be on Hannah’s OSS.

I worked with Joel to achieve the various footage. I told him about the Johari Window which details the four types of perception of character. The open self, the hidden self, the blind self and the unknown self.

Each of these perception is achieved through various elements in the scene and thus capture various essences of the same character. It was an interesting concept to play with and I thought it was well conveyed in the final output.

We also looked into the cinematographic style of the game ‘Dexter’, ‘Her Story’ and the movie ‘Purge’. 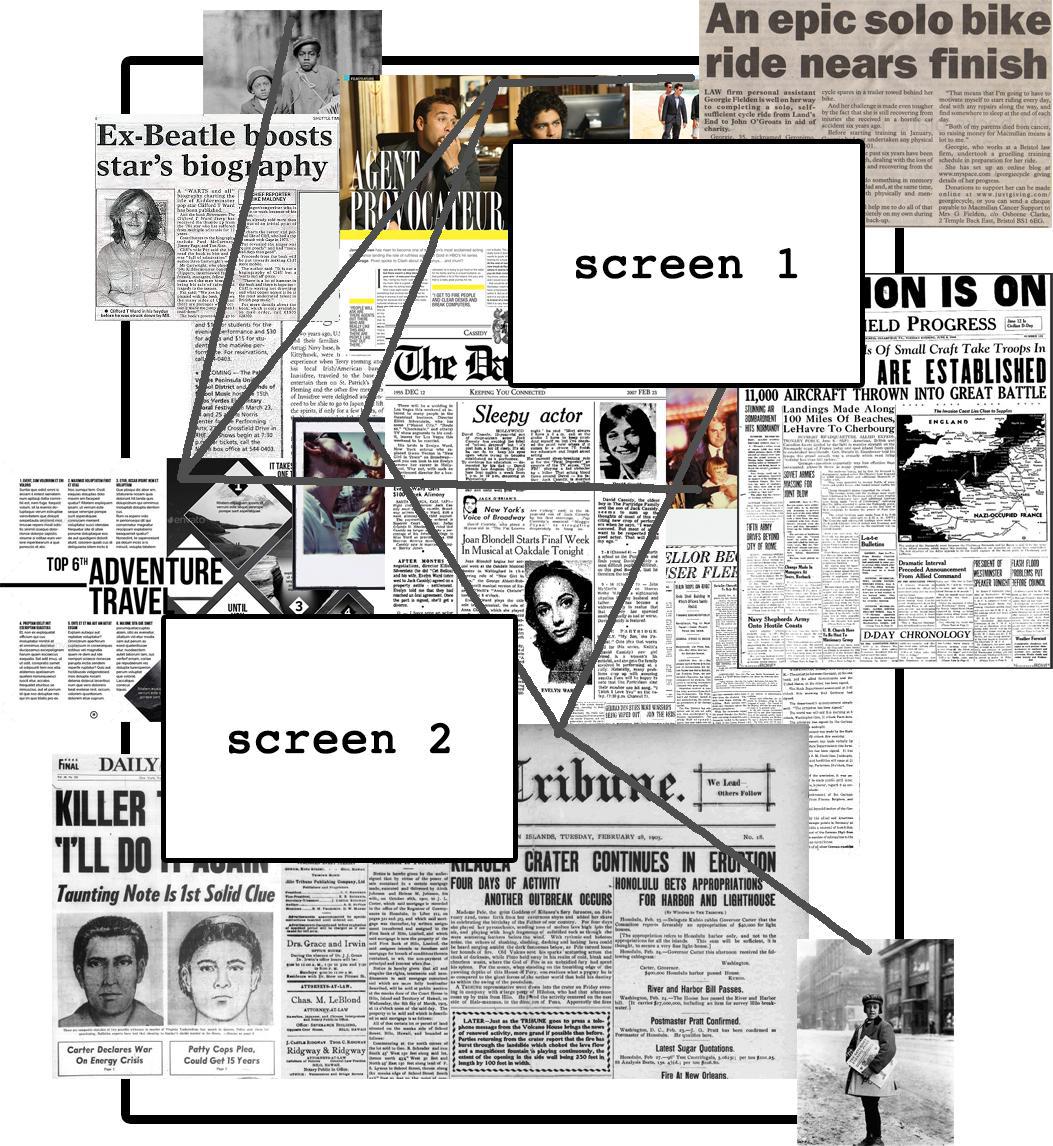 With Hui En,  I worked with her on the overall look of the final board that will be the almost center piece of the installation. We looked into Miles’ character, past and things she will look for in articles. We explored various ‘textures’ of paper as well – from newsprint, printing paper, and even instax. 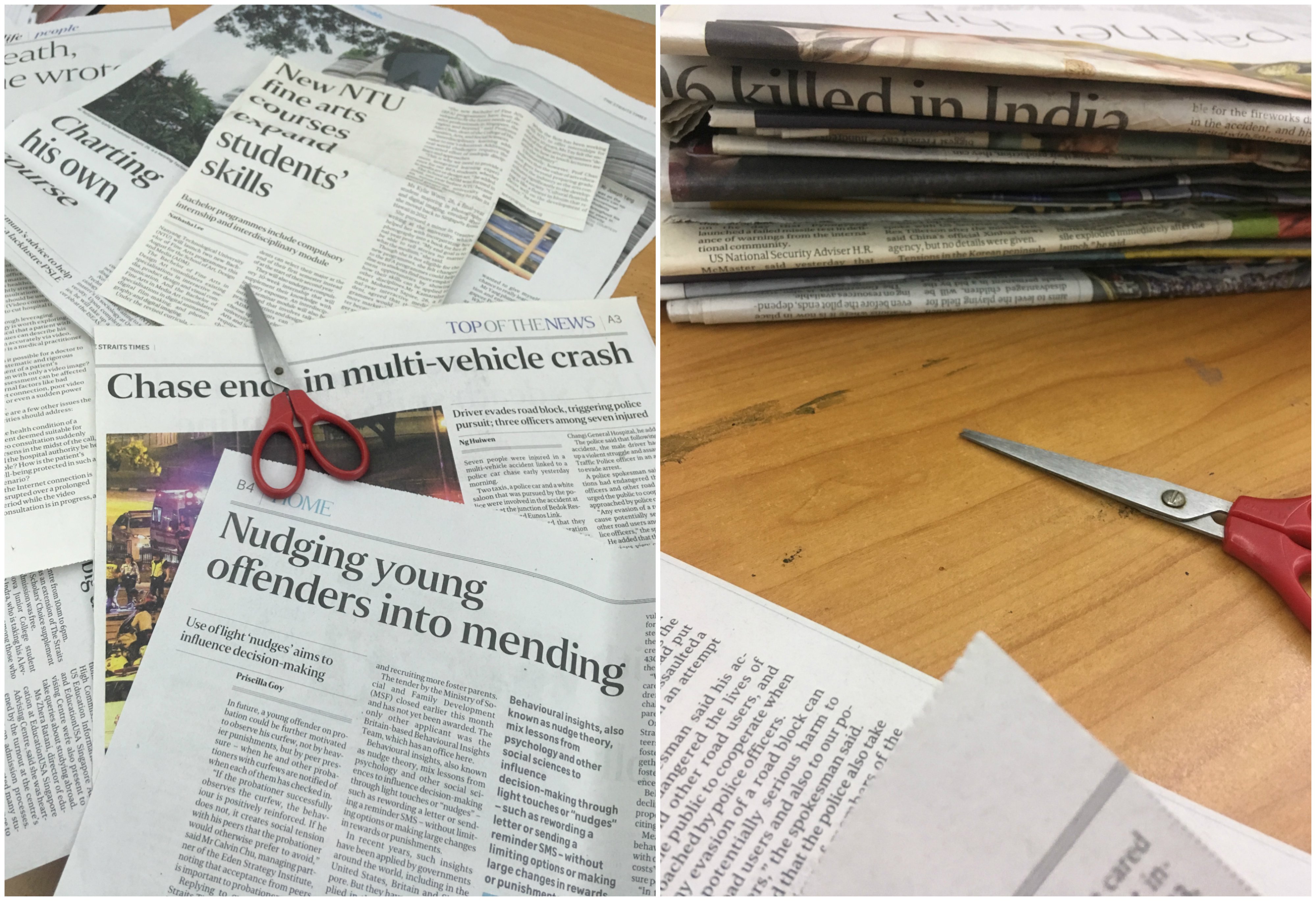 Visual references for ‘Map of Conspiracy’

More of that on Hui En’s OSS

Once all the pieces were set, we began production.

The day started with shooting Shi Min’s murder scenes. We choreographed the before, during and after the murder. As the camera was a wide and far away shot, we got away with little flops in choreograph and ‘special effects’. However we had to exaggerate actions so it can be seen from afar.

We “borrowed” a ladder from one of the rooms to achieve the high vantage point in the CCTV footages and sometimes went upstairs to shoot the space below.  We also utilized wide angles in some scenes to allow a more CCTV look.

We aimed to capture the space (the corridors that seems to end in a distance) or people in the space to support the narration (students doing work). Oh yeah, we also took a trash bag from the cleaning aunty as the body bag and stuffed it with our bags to act like it’s heavy – yes we are impromptu about the murder as Miles was.

Final outcome of the CCTV

We then proceeded to shoot Mile’s vlogs in Hannah’s hall. We shot both the day and night scenes through the use of lighting in the room to show various times and states of mind. In our attempts at budgetry, we used stacks of books and wallet as a makeshift tripod, a piece of kitchen towel over the lamp as a diffuser, and blutac as a makeshift holder. It was budget, but it worked.

Fortunately for us, Hannah was very comfortable in front of the camera and handled the challenge of conveying a deteriorating state of mind very well – I supported this through the usage of lighting, space, wardrobe, and hair (or make up).

dont you think it looks like we REALLY shot it at night?

One challenge we faced was one scene where we had to place the camera just right on a tilted surface as we really wanted the dutch angle shot in this moment – so Joel and the team crafted an elaborated choreography where he will position the camera from the bed in the darkness to a perfectly timed series while we chose strategic spots to hide, which you can watch below (please excuse the off sync, it wasn’t the best take used and I got locked out too often)

If you look closely, you can see Joel directing hannah through the art of charades

The day started with shooting the second half of the vlogs. I was very fortunate to have an extremely dedicated and talented team that transformed a corner of a space into a hideout with a board, string, newspaper and lots of tape. We originally intended to shoot the scene in our actual space, however decided against it as the audio would become echo-y and inaudible.

So we sourced for a hidden classroom and shot there. We also used the table in the room and hid a lot of stuff on it. Once again we see the return of our budget ways and secured a red LED light with tape, diffused the light with a piece of paper and held up the board with a stool taken from a classroom next door (don’t worry we returned everything).

We also considered about Mile’s acting and how the lighting and space complimented it. I was very thankful that Joel (the cinematographer) was very observant to lighting and lit the scene so beautifully to subtly show the state of mind in the character without it looking too obscure.

We then shot Deryck and Hui En’s murder scene. We once again borrowed the ladder and shot some CCTV footages.

Watch our Behind The Scenes here
(but sorry, we didn’t really shoot day 1 cause it was so busy)

We began setting up the space for the installation. With my art director’s vision, we first set up the projector then placed the ‘screens’ the images were going to be projected on. 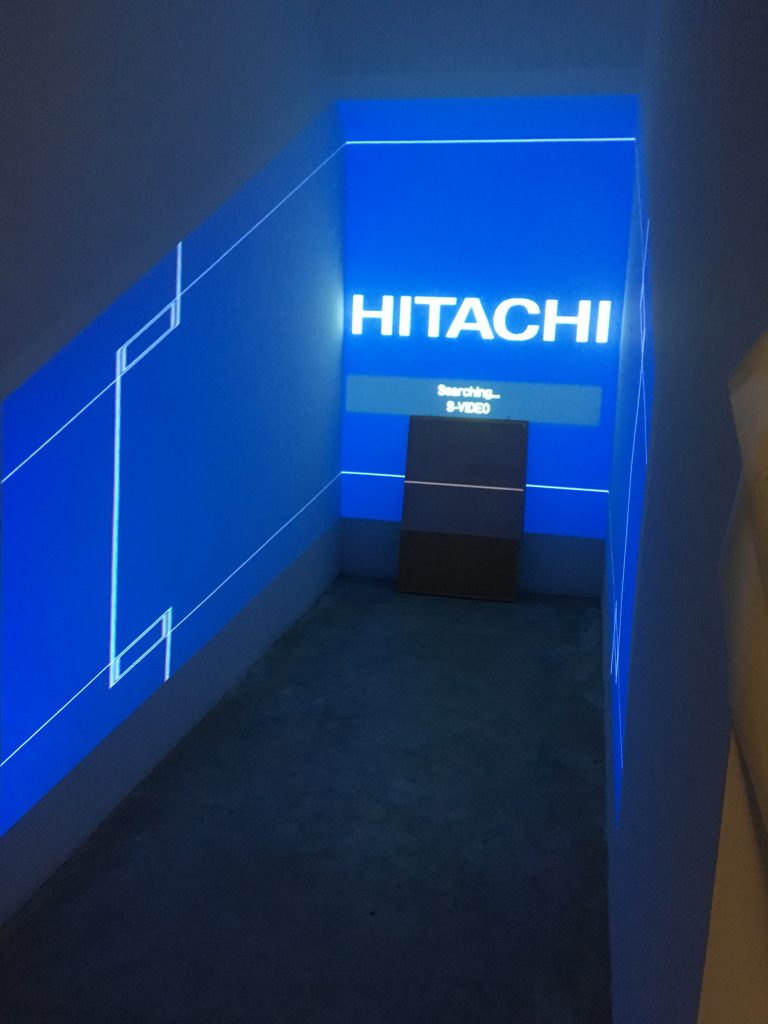 I watched youtube videos about projection mapping and utilized a grid method to determine where the two videos will be, then fit them to a grid projected on the board. We then worked backwards and placed our articles, threads and photographs around the screens and tied threads to link articles and photographs together.

Some challenges we faced was firstly finding a way to mount the board onto the wall, we tried double sided tape, blutac and even propping it against a stool – however we ultimately used an easel as it was the most stable and probably something Miles would have used in a space like that. 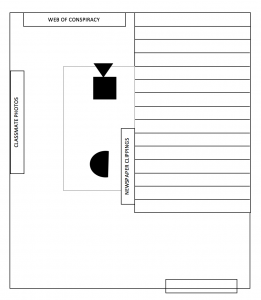 This was the final layout for the installation.