For this week’s class, we would be participating in a body-storming exercise. The objective behind this was to get an idea or feel of what our final project would look like or act like in the end. Through this exercise, we were able detect exactly how the participants would interact with our project and gain feedback from them to further enhance the experience.

Dan and I have decided to tackle the provocative path and address a particular issue. After many ideas that were cast aside, we essentially agreed to create a project that would attempt to ‘break the taboo on menstruation.’ We feel as though menstruation has been universal a verbal taboo and an uncomfortable topic to talk about, making females feel the need to conceal or hide it to themselves. Through this project, we intend to reverse this, and make it a talked-about conversation. We want to communicate that periods shouldn’t be a difficult topic to talk about and instead educate and share experiences with one another, to pass confidence to the younger female generation. We aim to diminish this attitude of embarrassment and discretion, and emphasize the first step to breaking this taboo is by having it present in our social circles and in our everyday life.

Actually, we thought of our object first because we believed it would be easier to work from here and think of possible topics to tackle with this. We were inspired an interactive project using the concept of a gumball machine, where a participant inserts a token inside and is able to do two things – record into a cassette tape where they share some information about themselves in hopes to having a new friend and the second being listening to other peoples.

Our topic using this gumball machine was first to comment on the education of environmental issues and how they lack depth, for people to feel empathy towards. We wanted to use easter eggs, where the participants could open, and inside be an SD card where they learn information about trees, oceans, etc. Despite this, we had a difficult time linking our topic to the gumball machine sufficiently. Finally, we went back to the eggs and thought about a topic regarding this, we soon realised that the egg could mimic a fertilised egg being released into a fallopian tube, however in our case, the egg is unfertilised, what caused menstruation.

Adding onto this, we wanted the content inside the SD cards to be recordings of people giving advice on periods, sharing humorous past experiences, or in general expressing their opinions. This would be able to establish an environment where periods can be a light-hearted topic.

The way the participants would interact with the project is essentially in two ways – from both giving out opinions on periods, as well as listening to other people’s. We did it this way, in particular, to emphasize that two-way relationship and for it to circulate amongst our everyday lives.

We created a rough mock-up of our object, we used an empty container and then created the spiral for the egg to be dropped down using cardboard. A problem we encountered early on was that we realised that the egg was too big and it had an awkward shape, that wasn’t able to roll down as smoothly as we thought. Therefore, we had to improvise and put the SD card into a aluminium foil instead and form the round shape.

We also replicated the shape of the phone with the screen being hollow. This was so we could slide down the phone displays, that our participant would see if it were a real phone. Some things we drew on paper included the Twitter home page, the Twitter ‘What’s happening’ box, and the feed after the tweet was sent.

We were unable to speak to our participants directly and therefore on a sheet of paper, we wrote a list of instructions. 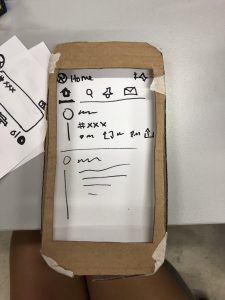 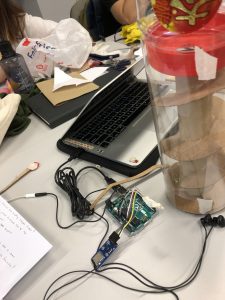 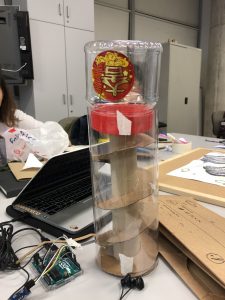 From this exercise, I feel as though I truly understood the complexity of interactions and how much you can learn from gaining an outside perspective. Because Dan and I had been talking about our idea for a long period of time with only each other, we were satisfied with the idea we had come up with, in our heads, but once we executed it ourselves for the first time, we quickly realised there were a lot more factors we had to take into consideration and that it perhaps isn’t as simple as we had hoped. Instead, we need to approach our project in the perspective of someone who has zero knowledge of our object and is interacting with our object for the first time.

We realised that although the participants were taking part in OUR interaction, us creators had to create our object with them as our main client or the main priority in our heads, as we couldn’t make them think the way we want them to. There were lots of small pointers given during feedback that we had not thought about before, such as the hassle of putting an tiny SD card into a reader. We realised that to some, this would not be as easy of task, as they may be unfamiliar or confused with where to put it if they have no prior knowledge.

I also learnt that the environment that the object is placed in, is important because this allows the participant to be able to visualise the context of the object and detangle the importance of it. For our project, we were told that our concept wasn’t pushed through enough and had to amplify it by perhaps forming the gumball machine in the shape of a uterus.

I learnt that the only way to get around knowing loopholes is to personally try them/ have participants that have no clue about the project to try it. There were many things that did not come into our consideration previously such as the degree of slope of the gum ball or even as simple as not knowing that others didn’t know what a SD Card Module was.

Another thing that I learnt from the whole process also is that audience plays a part as well. By watching their reaction, you can kind of estimate whether in actual exhibition, others will be attracted to the work.

I was surprised by how self-operating our project needed to be, because even with written instructions, our participant was confused at times. This is something we had to work on as we will not be present during the final presentation. I learnt that you can have a strong, interesting concept, but it won’t mean much if your project lacks clarity or isn’t able to execute well.

When I was trying/watching: Other people’s work! It was interesting to hear of everyone concept and also learning what could potentially apply to our work as well.

Our team’s own work: The steps are actually more complicated then I envision. In my head, it all works out and assumed as intuitive. However, upon watching someone else do it, maybe not so much anymore.
One example which I never thought about was the fact that what was on the table matters as well. Initially when the instruction was to insert SD card into SD module, because my computer was on the table, my participant attempted to insert it into my mac.

I learnt that it is absolutely crucial for the egg to roll down smoothly, because when our participant did it, the foil got stuck and (luckily) we were there to be able to shake it to move downwards, however during our final presentation we are unable to be anywhere near our project or guide our participants. I also realised that our project needs to be functioning without us there, and that we couldn’t create a set of instructions for them to do like this session. Therefore we needed to think of a way to introduce our Twitter concept in a subtle way.

One main thing would be the form. In order to send the message across, the form actually plays a huge part. Initially, our form took the form of a gum ball machine. So upon explaining our project to the class, it seems like too far fetched of an idea. So now, we have to make it more explicit by actually making a mock up of a female reproductive system.

The SD module and ear piece doesn’t seem to be as appealing of as idea to the crowd than we expected. There were suggestions such as ‘make it like a fortune cookie’, ‘do a QR code instead’ Hence, we might do something less sophisticated and more intuitive instead.

Other aspects would have to be the degree of the slope, how to get others to tweet the actual content that we are looking for, and what happens after the participant receives the egg, do they take the egg (and contents) home or not.