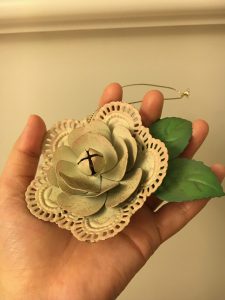 Besides the elaborate designs of the petals, I was attracted to how the curvy positive spaces of the overlapping petals created an interesting movement of negative space.

This piece is in proportion such that the whole piece does not look imbalanced. There is not much of a contrast in texture but what made up for it is the difference in colour of the petals and the leaves. 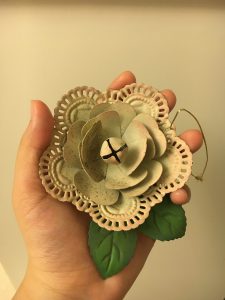 The sub-dominant volume are the leaves. The size and the colour of the leaves complement the light coloured dominant, further improving the overall character of the dominant too. Although the leaves are a brighter colour than the dominant, it does not overpower the dominant as they are kept simple and smaller.

The subordinate is the small bell located in the middle of the flower, acting as a finishing touch to the whole piece.

However, the subordinate could be more interesting if it is in brighter colour. The position that it already is in is good enough as it acts as a meeting point between the dominant and sub-dominate, giving a sense of unity to the piece.