Project 3: Genre and Narrative – Who Is She

For this project, our group decided to take on the theme of horror. 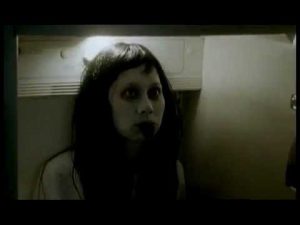 One example was the Pantene shampoo commercial that started off with an emotional storyline, only to end it with an advertisement of their product. 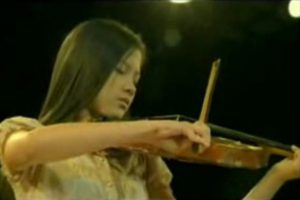 The three of us finally agreed that ours would be a mix of horror and comedy; starting with an eerie feeling only to end off with an unexpected twist.

Storyboard process: Initially, we wanted the ghost to be her creepy next door neighbour who is always seen lurking around the block with her long, straight hair. At the end of the video, the protagonist would finally take up the courage and come up to her neighbour. This neighbour would then turn around and then start to advertise a shampoo she is using to achieve the long straight hair that she has in a comical way.

However, after consulting Ms Lei, she told us that it would make more sense that we change the neighbour to a salesperson. It is more logical for a salesperson to suddenly promote to the protagonist her shampoo product and we all agreed on that! 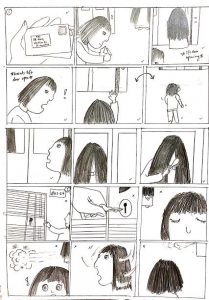 Scene 1: Protagonist at the letterbox area shuffling through letters. Ghost went into the lift. Protagonist quickly rushed over to the lift too. However, she was too late and caught a glimpse of a lady combing her long straight black hair.

Scene 2: Protagonist unlocking the door to her house. Glimpse of the ghost at the back. Protagonist smelled something, turned around but saw nothing. 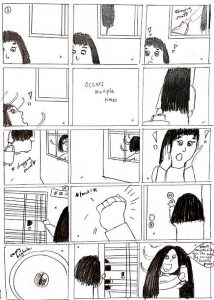 Scene 3: Ghost seen to to be going to protagonist’ house. However, she could not hear the doorbell since she was listening to music.

Scene 4: Ghost came to her doorstep for the second time. Protagonist looked through the keyhole to find nothing. However, the moment she opened the door to check again, she was greeted by a creepy…… looking salesperson promoting her shampoo!

Video Editing: We did colour correction to achieve a darker, less saturated atmosphere to give off the creepy vibes. We also made use of lots of sound effects as we feel that horror films would not be effective without the proper eerie sounds.

Even though the 3 of us were new to Premier Pro, we learnt a lot from experimenting with the different shots and sounds. Overall, we really had a lot of fun 🙂

Artistic Statement: “Who Is She” is a short suspense film with a comedy spin to it. Our inspiration came from the Malay folklores such as the “Pontianak” aka the banshee and “Nenek Jual Keropok” aka The Auntie Selling Crackers In HDB flats. This short film starts off with the protagonist (as played by Yuli) having a close encounter with a lady in white (as played by Filzah) as she does her daily home routines in and out of home. We see the lady dressed in white, Ms Pontianak, who’s been appearing near the protagonist’s home, mysteriously. There’s a knock on the door in protagonist’s home, and it appears to be that lady in white. Towards the end, viewers are in for big surprise as they realize what Ms Pontianak is in for.

1 comment for “Project 3: Genre and Narrative – Who Is She”