More than year ago, I visited Amar Kanwar’s solo artist exhibition Sovereign Forest (30 Jul – 9 Oct, 2016) at the CCA. Since 2011, the New Delhi filmmaker has been committed to this ongoing research project, where he presents glimpses into the Odisha environmental conflicts.

Amar Kanwar’s Sovereign Forest was really one of the first experience I had attending an  art exhibition that had a scientific approach to research. That show was very well curated. It was an atmospheric aesthetic experience that opened my mind to the kind of outcomes that art research projects could arrive at. Hence, I was really looking forward to visiting The Oceanic, as my coursemates told me a little about what I’d missed, when I just returned from my exchange to Germany.

Indeed, The Oceanic moved me equally. The featured artists are collectively known as The Current Fellows and they have been on at least one voyage on the TBA21’s vessel Dardenella. This is part of an ongoing research initiative. Visiting the exhibition was a great opportunity to experience their artistic interpretations and concerns for the oceanic environment.

I certainly regret not being able to attend the The Current Convening event. But going to the closing ceremony was a really inspiring experience. Curator Prof. Ute Meta Bauer, representatives from organisers TBA21 and Conservation International made some insightful points on the power of artists and the importance of conflict resolution in environmental sustainability. The highlight of the night really was Mr. Anote Tong sharing and dialogue. The former President of Kiribati spoke of his concerns for his country which comprised of small islands that have unfortunately been experiencing the direct effects of Global Warming and rising sea levels over the past decades. 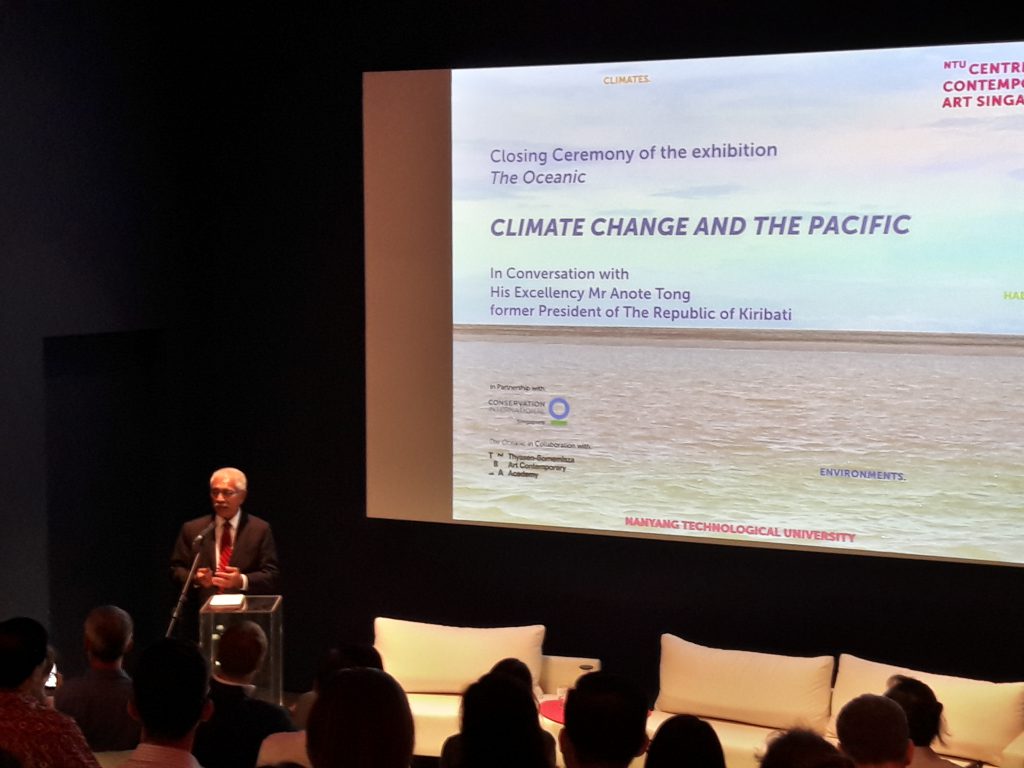 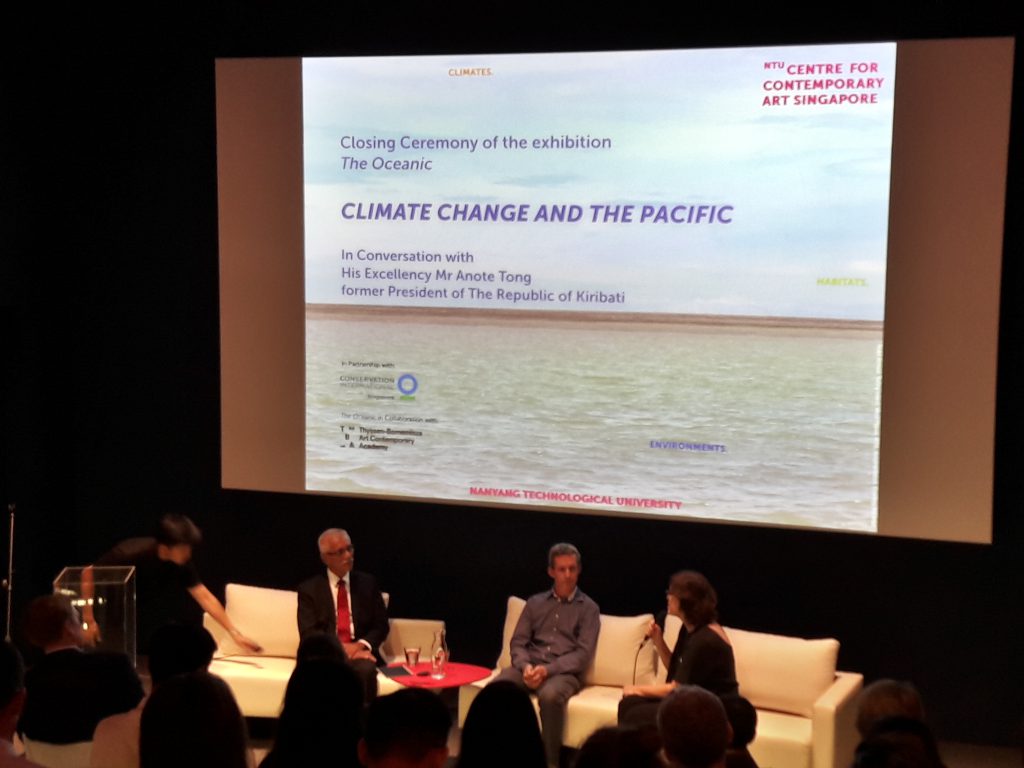 After the talks, I walked the exhibition again with possibly some newfound responses to the works. There is one work from the exhibition that I would like to briefly relook at now. Apart from being prominently right at the entrance, Tue Greenfort’s Tamoya Obboya (2017) was the one that really intrigued me from the start. This live installation was inspired by The Current Fellows voyage to the Kula Ring off Papua New Guinea. The artist observed how these Jellyfishes have swum oceans in a mass-migration due to the warming waters in the original geographical habitats. 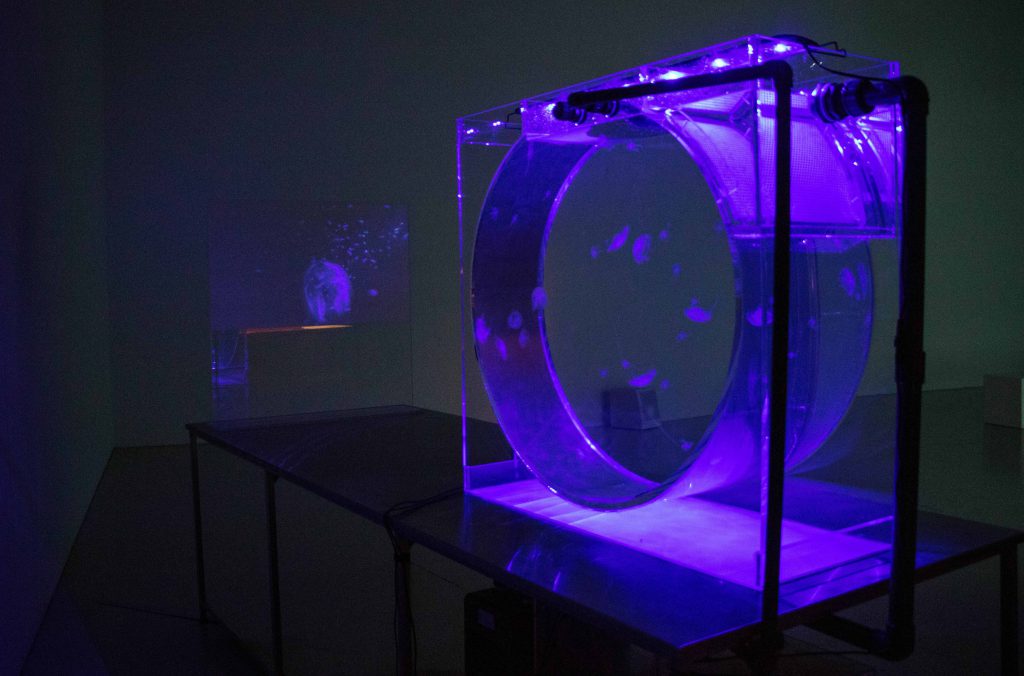 On one end of the steel table, live Jellyfishes bob round and round in a circular water tank, almost like an aquatic hamster wheel of sorts. The title of the work identifies the species in Latin. They are also known as the Bonaire banded box Jellyfish and they have been around for 500 million years. Florescent lights illuminate the tank, making the translucent forms of the flailing creatures visible. On the other end of the table is a screen with footage of the Jellyfishes in their ocean habitat. 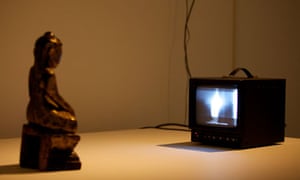 It is a rather surreal arrangement. Somehow, it reminds me of a work by Nam June Paik called TV Buddha (1976) where the Korean artist made a sitting Buddha statute watch itself on TV. Buddha’s interaction with the television creates a mysterious tension, where the formless meditative state looks towards the virtual world and back again. While in Greenfort’s work, the Jellyfishes are facing their natural habitat, even attempting to swim towards it. You can think of the relation of distance to be as close as a screen away or geographically hundreds of miles apart. So close yet so far. Are these memories of home, inevitably lost? There is a kind of tranquil haunting in seeing the Jellyfishes constantly swimming towards a home they were forced out of.

In Greenfort’s work, the Jellyfishes are on tour, far from their natural environment. Filters and regulatory mechanisms work continuously to keep their display tank as habitable as possible during the exhibition. Yet it doesn’t really care? Its biological makeup informs it that the temperature is optimal, the light is optimal, etc. Everything is in an optimal state for survival. There is nothing else they need.

The Jellyfish’s choice to migrate for survival is a biological one. It is what separates us humans from animals. Mr. Anote Tong’s sharing about what his administration has been doing and how the people of Kiribati feel so strongly about staying put in their islands is something that is very human. They choose to face the ever-worsening situation of global warming and rising sea-levels because

I believe that the speakers at the closing ceremony made many of these points that other artists from The Current Fellows expressed through their work more or less verbalised as well. I admire both parties. These artists for how they push beyond pure aesthetic to advocate and empower. And the work of environmental NPOs like Conservation International or politicians and advocates like Mr. Anote Tong are essential forces to change the world for the better. But sometimes the artists’ medium can be very much as powerful in driving change. It was an eye-opener to see both sides in action that night. 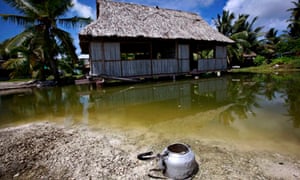 On the other hand, Mr. Anote Tong also mentioned his “100-year island theory”. He says that he has tried his best during his 13 years of presidency. Some things worked out, many other things didn’t. But he certainly doesn’t give up. In 2014, Mr. Tong finalised the purchase of 20 sq km of land on Vanua Levu, Fiji. His idea is that that area will be a last resort for his people to leave their islands and seek refuge when the time comes, so that Kiribati will not have a refugee crisis. It is a place where Kiribati will still have for the next 100-years. Enough time such that, hopefully, the solutions for the irreparable damage to the environment will be found.

All these issues that gave people like Mr. Anote Tong many a sleepless night, really kept me up for quite a bit that evening (the wine wasn’t drowsy enough). While I  knew I couldn’t possibly think up a solution, it became all clearer to me that what we doing now really is just losing time. The Jellyfishes have chosen migration to solve their crisis. What will humans come up with? And when?

The Oceanic Exhibition Guide, produced by NTU CCA Singapore in collaboration with TBA21 – Academy The Current.