Eric Zimmerman’s light-hearted attempt at unpacking and explaining the ideas and concepts surrounding the narrative and interactivity is indeed a great read. I personally am drawn to the text simply by his sense of humour. There is something playful about it. All about it in fact. And that makes reading an “interactive” experience in some sense; I feel like I have just had an interview with the guy. Of course, I am using the word “interactive” rather loosely here. Zimmerman will probably comment that is undesirably naughty.

This text is a great start to discussing about the concepts at hand. As opposed to simply being fixated on definitions, Zimmerman provides us with points of departure, from which we can let our imagination take flight. And let the game begin. I like that for each of the concepts (Narrative, Interactivity, Play and Games), he lists possible modes, categories, elements, attributes, avenues for us to explore how we might best grapple with this whole matrix of ideas. Through this whole process of becoming more aware of the media that we are dealing with, Zimmerman encourages a sort of excitement in searching for breakthroughs, or as he puts it himself “not to replicate existing forms but to invent new ones.”

Apart from opening up all these more theoretical and conceptual mappings of the concepts, Zimmerman also illustrates his points by raising a few great examples.

Chess, as the example of a game that simulates a two-player interaction and more of a cognitive interactivity in this battle of wits. But at the same time there is a narrative of war, heroes and playable characters, triumph in stratagem, albeit unconventional, yet there is a narrative structure there.

Pac-Man was another example which he employed to show us how even the most explicit interactivity can have sophistication in its use of narrative. This widely played arcade game is a story of life and death, the society at large with all these embedded into the game-play itself. And we recognize these things in a very integrated level through the playful connection with the Pac-Man character.

I feel that the reading will serve as a good guide in brain storming and conceptualizing ideas for interactive narratives. However, the conundrum of the mash-up of concepts continues to be daunting to me. And I would want to really take time to figure my way around a little. Where do I position myself within the whole process, as auteur, as facilitator or as a participant amongst the audience as well?

Also, there is this definition that Zimmerman offers us regarding Play. Wherein he says that play is freedom of choice within a fixed structure. Play exists because of the rules and constrains and in spite of them as well. Here, I find that either I do not understand it enough or I might need further exploration, as I am concerned about how to be convincing and compelling enough that this play will be able to take place within the systems I create.

In conclusion I think that Zimmerman was really trying to push for a certain kind of value in all these things and how we might exact pleasure from it. Pleasure from the media that is intrinsic to the media itself, differing from say a book or a film. I think his points will be good to negotiate this and find a way to start. I hope, though, for the ideas to form more organically and in a way not prioritizing or setting limits for any of these interconnected concepts.

Since the advent of the digital age, sound art has certainly evolved into an interesting medium of endless possibilities. Artists are currently able to generate visual imagery in response to sounds, employ sounds as a means of interactivity as audience control the art through motion sensors, pressure pads and voice activation. I feel that traditionally, art has been very focused on light. So it is intriguing to ponder what does sound reveal that light doesn’t or is unable to?

Upon doing my research on sound art, I found an artist that certainly amazes me. Although he is still by far a traditional sound artist as he did not live in the digital era, I think that his works are a great answer to that question I was thinking about, about the possibilities of sound.

Harry Bertoia (1915-1978) is an American artist, sound art sculptor and modern furniture designer. Fascinated by sound since his childhood and he went on to fascinate the world with his sound art. In fact his sound works are still so popular that thousands them are in high demand at auction houses.

Bertoia was very much inspired during his childhood when he observed Hungarian gypsies using pots and pans to create rhythms. It was the vibrations from these wares that left a deep impression. So in the 1960s, he started to create the series of works he would name ‘Sonambient’.

“Sonambient” are a collection of uniquely crafted sound sculptures, including gongs and “singing bars”. These are sound sculptures that mostly work from the reverberations of the materials to create ethereal sounds. The artist arranges tall tonal wires in a certain fashion such that the pieces will strike each other to create a wonderful sound.

The fascinating thing is that his sculptures are like snowflakes, no two pieces are alike, as he was interested in exploring the endless possibilities of a different or richer sound with varying size rods. This is an artist who is truly obsessed in the medium that he has chosen to venture and create in.

Bertoia also did interesting works in collaboration with others to record his “Sonambient” music into eleven albums. These tracks created are haunting and mysterious. The chime of the rods and bars are contrasted with the thunderous clasps of the gongs.

Hence I find that this is a great example of sound art that can achieve what art is unable to with just plain visuals. Bertoia ability to go to great lengths to engineer such exquisite works has certainly captivated me and deserves the greatest admiration. I believe his works will continue to reverberate in the artworld and live on.

On a side note, relating back to my 4D class, I have seen how my classmates have used sound in their 4D projects and it is really great to see how sound can make the communication all the more effective. Especially so in the library installations as there are quite a few works that use sound and I see that as a good choice of alternative presentation of an artistic experience because the library already is very ‘visually noisy’. So those works managed to reveal the subject matter, the artist intention, etc, in a way that plays out well amidst the visual clutter of the library. 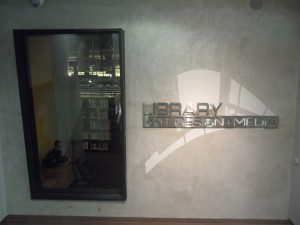 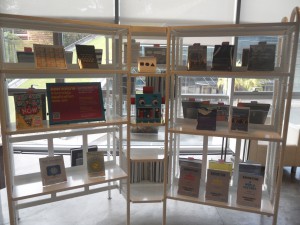 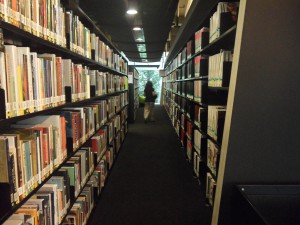 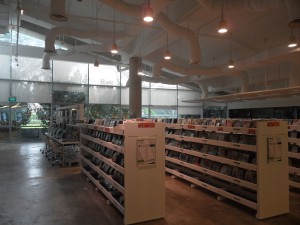 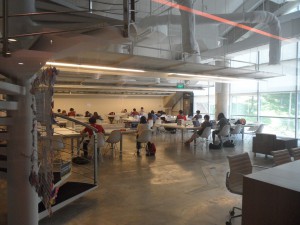 first thing that interests me is the book drop. I have had quite a few bad experience at NLB because the book drop did not register my returned items and was sent emails to go pay the fine for something I had returned. So it resulted in a few of these episodes of back and forth with the NLB staff to check into the matter. So I am slightly paranoid when I go bookdrop. More recently I even take photos of myself returning books just in case. But haven’t had such issues with ADM library (yet?!) haha. makes me want to think how are my items collected, how the library is run? 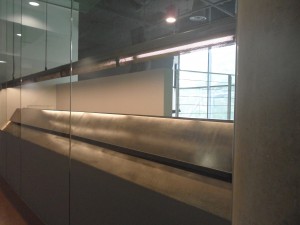 next to bookdrop is the section where the so-called featured books are featured. it is empty at this moment…

From experience of using the ADM library, usually when I return books here, I would be compelled to go in to see some other titles which I most likely would then borrow.

this part of the library seems at once where old info and new info collide. 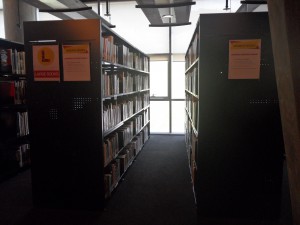 There is this really voyeuristic feel and because of the need to be quiet that interaction feels awkward. 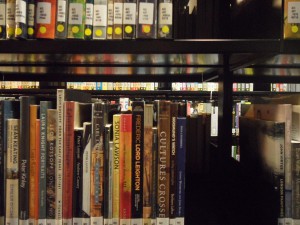 The other thing is this quest of searching for a book. Sometimes it is really not easy. The spine might be very inconspicuous, the index very hard to pin point. I have done sourcing for references in here for my art history essays. Each time I can spend afternoons just walking around, sitting about. In search of the information I need. And that is a really interesting journey, which arguably can be much simply done on the internet.

What then is the relevance of the physical book?

lastly, I am intrigued by some of the quiet random spaces here. like this one. table chained to the pillar with chair by the window. who sits here? who does work/ read books here? my thought was they initially placed the library catalogue browser which has been removed. so this space is there now for people to use if they may…

I like how it is constrained yet open at the same time. it is just like how we behave in the library itself. we have to observe the quietness, yet we require to be open to the wealth of information. 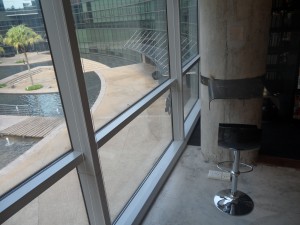 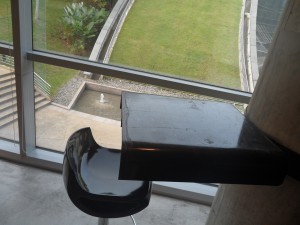 library seems to be a very static environment. not much energy around. people are all absorbed in their work.  I have the impression not many people actually borrow the books to read though.

On personal note, I think library is like going on a quest to find something. ADM library is really great. Back in JC I did not have such a diverse catalogue to choose from.

So I think that this project might allow me to see how the sort of static, small spaces in the library can be a huge experience for an adventurer hunting for a read.