By employing fantasy and dream imagery, artists generated creative works in a variety of media that exposed their inner minds in eccentric, symbolic ways, uncovering anxieties and treating them analytically through visual means. (“Surrealism Movement, Artists and Major Works”, 2017)

‘The Persistence of Memory by Salvador Dali:

In Persistence of Memory Salvador Dali illustrates how useless, irrelevant, and arbitrary our normal concept of time is inside the dream state. During our daily lives, we’re always rushed and busy, trying to get all of our work done on time. Many art scholars debate over whether these timepieces are clocks or in fact pocket watches, very popular accessories in the 1920s and 30s, when the Surrealists worked. The Surrealists laughed at most things middle-class society takes seriously, and that includes the importance we place on things like pocket watches that mark passage of time. (“Salvador Dali Persistence of Memory: Meaning of the Melting Clocks”, 2017)

‘The Treachery of Images’ by Rene Magritte:

The picture shows a pipe. Below it, Magritte painted, “Ceci n’est pas une pipe” French for “This is not a pipe.” The painting is not a pipe, but rather an image of a pipe. He consistently interrogated conventions of language and visual representation, using methods that included the misnaming of objects, doubling and repetition, mirroring and concealment, and the depiction of visions seen in half-waking states-all of them devices that cast doubt on the nature of appearances, both in the paintings and in reality itself. (“The Treachery of Images, 1929 by Rene Magritte”, 2017)

I’ve always been fascinated by surrealism and I find that Surreal artists are geniuses for being able to come up with such interesting ideas. I personally think that the simpler the idea, the more powerful it is, as it often makes me wonder ‘Why didn’t I think of that before?’. Another aspect of surrealism that I love is that it bends reality and brings us to a dream-like world. As these dream-like world are reality with twists, it causes the image to be more thought-provoking, making us think deeper as we look at the image.

Dada was the first conceptual art movement where the focus of the artists was not on crafting aesthetically pleasing objects but on making works that often upended bourgeois sensibilities and that generated difficult questions about society, the role of the artist, and the purpose of art. Dada artists are known for their use of readymade objects – everyday objects that could be bought and presented as art with little manipulation by the artist. The use of the readymade forced questions about artistic creativity and the very definition of art and its purpose in society. (“Dada Movement, Artists and Major Works”, 2017)

There is little manipulation of the urinal by the artist other than to turn it upside-down and to sign it with a fictitious name. By removing the urinal from its everyday environment and placing it in an art context, Duchamp was questioning basic definitions of art as well as the role of the artist in creating it. With the title, Fountain, Duchamp made a tongue in cheek reference to both the purpose of the urinal as well to famous fountains designed by Renaissance and Baroque artists. (“Dada Movement, Artists and Major Works”, 2017)

Cut with a Kitchen Knife Dada through the Last Weimar Beer Belly Cultural Epoch of Germany (1919) by Hannah Hoch:

Hoch unabashedly critiqued German culture by literally slicing apart its imagery and reassembling it into vivid, disjointed, emotional depictions of modern life. The title of this work, refers to the decadence, corruption, and sexism of pre-war German culture. Larger and more political than her typical montages, this fragmentary anti-art work highlights the polarities of Weimer politics by juxtaposing images of establishment people with intellectuals, radicals, entertainers, and artists. Recognizable faces include Marx and Lenin, Pola Negri, and Kathe Kollwitz. The map of Europe that identifies the countries in which women had already achieved the right to vote suggests that the newly enfranchised women of Germany would soon “cut” through the male “beer-belly” culture. Her inclusion of commercially produced designs in her montages broke down distinctions between modern art and crafts, and between the public sphere and domesticity. (“Dada Movement, Artists and Major Works”, 2017)

Dada artists are rebels in my opinion. Rather than accepting what is conventional blindly, they question and aren’t afraid of what others may think of them. This mindset allowed them to break away from the norm and because of that, unconventional but essential art movements were born. What I admire about Dada artists is that they do not simply accept their fate as ‘creating beautiful artworks’ that may or may not be meaningful. They dared to use as a medium to challenge society and push people out of their comfort zone in terms of thinking.

Constructivists proposed to replace art’s traditional concern with composition with a focus on construction. Objects were to be created not in order to express beauty, or the artist’s outlook, or to represent the world, but to carry out a fundamental analysis of the materials and forms of art, one which might lead to the design of functional objects. Constructivist art often aimed to demonstrate how materials behaved – to ask, for instance, what different properties had materials such as wood, glass, and metal. The form an artwork would take would be dictated by its materials (not the other way around, as is the case in traditional art forms, in which the artist ‘transforms’ base materials into something very different and beautiful). (“Constructivism Movement, Artists and Major Works”, 2017)

Popova uses repeating geometric patterns which were thought more appropriate to modern life and mass production than the floral designs that had previously been popular for such textiles. The intersecting circles and spacing of the stripes add tension and movement within the pattern, while also visually creating the effect of different textures. Popova’s prominence within Constructivism is indicative of the significant role played by women in driving the movement’s concerns; other avant-garde movements of the period were dominated by men.

Rodchenko created works that promoted Soviet ideology, but his works can’t be reduced to simple propaganda. His iconic poster for the Leningrad Publishing House is widely recognized, having been co-opted by many movements of lesser political intent; in the early 1920s, it was a powerful juxtaposition of visual elements and a call for literacy. (Underwood, 2017)

This art movement is an interesting one! It’s the first time that I’ve heard of artists deliberately allowing materials to dictate them instead of the other way around. Once again, like Dada, these artists aren’t afraid of breaking away from what was considered the norm and explore new techniques.

John Heartfield was one of the pioneers of the DADA movement, founder of photomontage, and was well-known for his satire political works that exposed the insanity of Hitler. He risked his life to used his art “as a weapon” to combat fascist propaganda, Adolf Hitler, and The Third Reich. Because of his ‘rebellious’ works, he had been on the top five of Gestapo’s most wanted list and narrowly escaped an assassination by the SS. While Hitler had military power, Heartfield’s “weapon” was his imagination, scissors, glue pots, dabs of paint, and stacks of photographs and magazine articles. He insisted his montages contained both literal and ethical truth. (John Heartfield Exhibition, 2017)

Heartfield used an X-ray to show gold coins in the Führer’s throat leading to a pile in his stomach. Hitler changes his supporter’s gold to lies. (John Heartfield Exhibition, 2017)

Goering: The Executioner of the Third Reich

Hitler’s designated successor is depicted as a bloody butcher. In 1934, Heartfield created this famous AIZ cover that exposed Hermann Goering as The Third Reich’s executioner. Goering had blamed the Reichstag fire that helped Hitler seize power as the work of Jews and communists. (John Heartfield Exhibition, 2017) 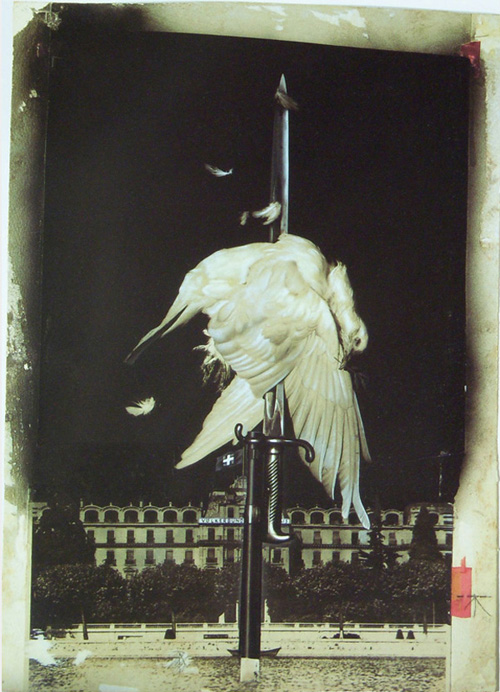 The Meaning of Geneva, Where Capital Lives, There Can Be No Peace!

This collage shows a dove of peace impaled on a blood-soaked bayonet in front of the League of Nations, where the cross of the Swiss flag has morphed into a swastika. John Heartfield’s love of all animals and nature is well documented. This image can be considered an especially deep emotional expression. (John Heartfield Exhibition, 2017)

After looking through the various art movements and associated artists, the artist that I found most intriguing is John Heartfield. His artworks were a response to the Nazi political movement back then. What was impressive was that it took a lot of courage and risk for an artist to produce such works, as it was going against the political powers. Besides being loaded with meaning, Heartfield’s works were also heroic and acted as a voice for many to stand up for their own views.

Even though I will not be touching on politics for Forrest Gump, I aspire to emulate Heartfield’s concepts by making use of literary devices and translating them into visuals. Besides tapping on Dada as my main source of inspiration, I hope to inject some Surrealism into my works too.