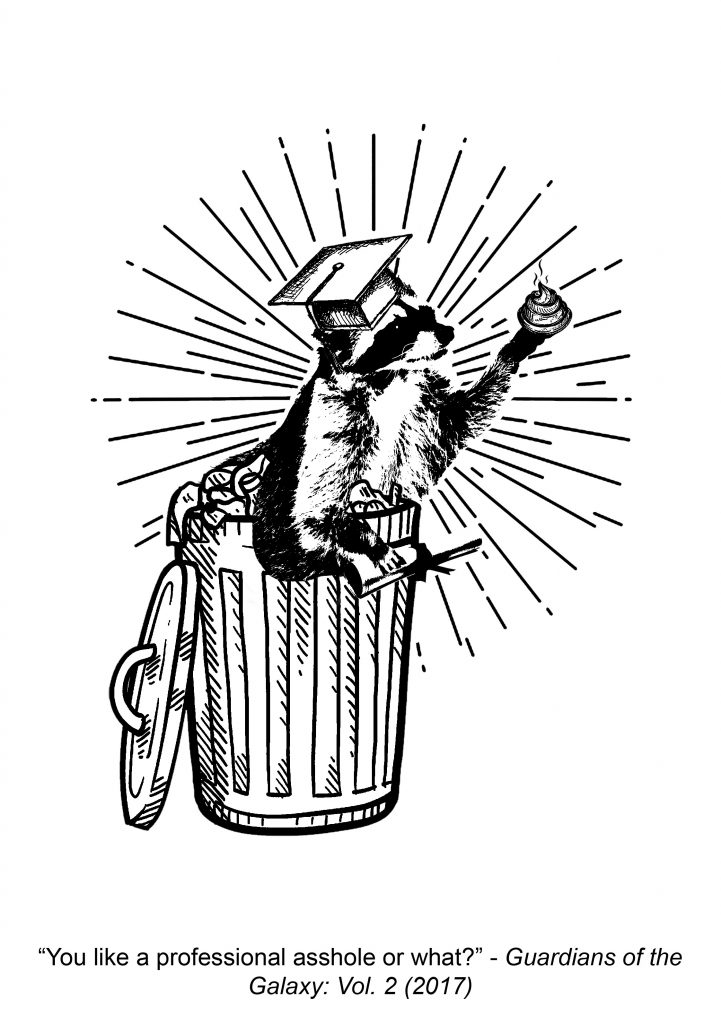 The design uses humour and metaphor to convey the meaning of ‘a professional asshole’. Wearing a graduation cap and holding a degree scroll, the raccoon pops out from a dustbin and proudly presents a piece of poop.

A raccoon is chosen to take the spotlight in this design because this quote is directed to Rocket raccoon in the movie. Since raccoons often raid dustbins and leave a huge mess around, it is appropriate to place a raccoon in the dustbin in this design. The graduation cap and degree scroll represents the raccoon’s legal qualifications of being an asshole, therefore making it a professional in this field. Out of all things, it decides to give something as disgusting as poop, this reflects just how despicable the raccoon is. Poop also comes out from the ass… so that’s appropriate to include in this design too!

In a nutshell, this design’s message is that raccoons do live up to their stereotype of an asshole. 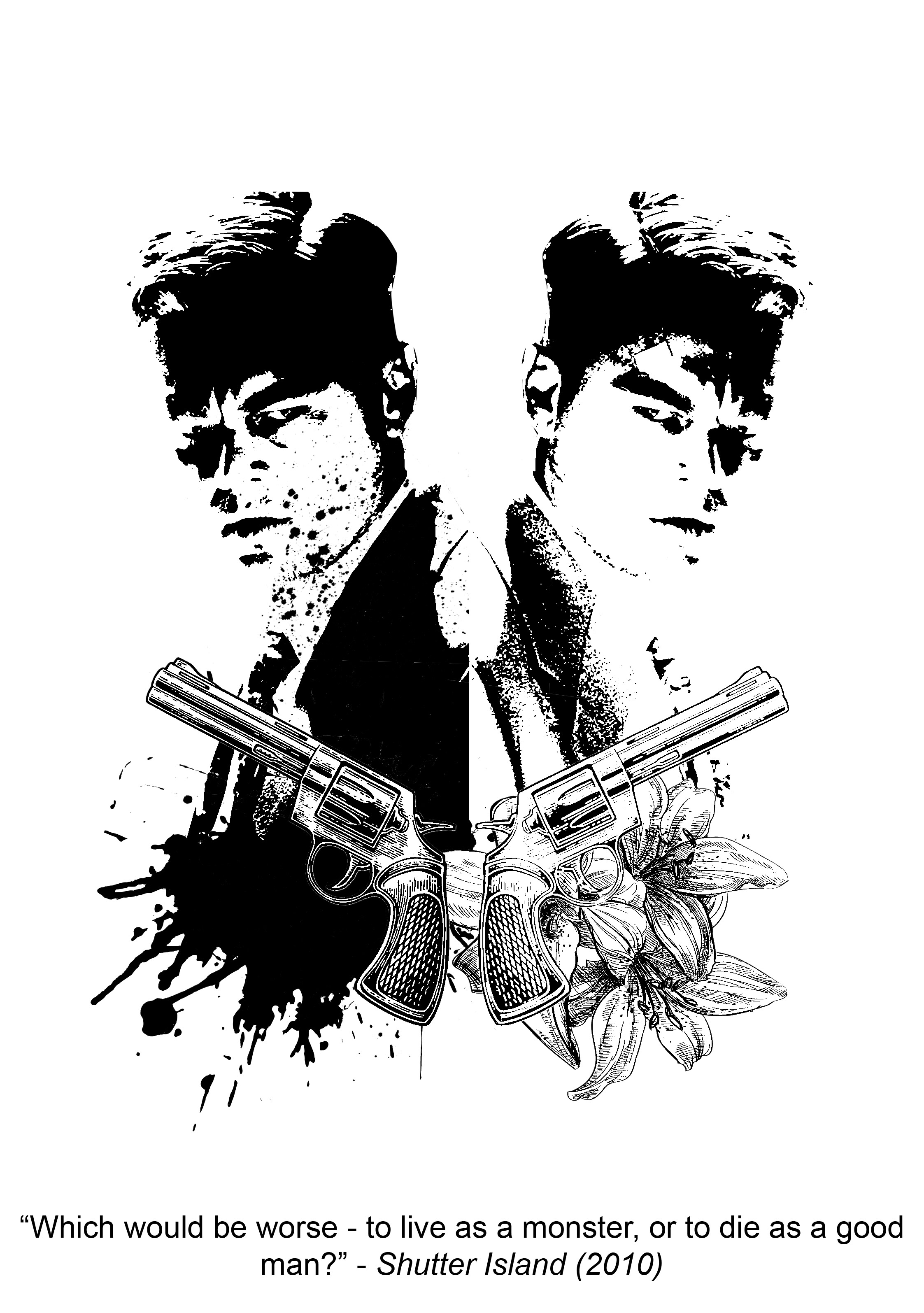 This design uses juxtaposition to show contrast between two different personas of the same person, hence the mirror images of the character. The left side that represents ‘monster’ is significantly darker in tone as compared to the right side that represents ‘good man’. Blood splatters that blend into the monster persona on the left side emphasises the horrific acts that he has committed, hence turning him into a figurative monster. Lilies, well-known for being funeral flowers, blend into the good-man person, representing the goodness and purity that this persona possess. Gun is the weapon that both personas yield, however it has been used in bad and good situations. In the monster persona’s case, gun is the weapon that he has used to murder. On the other hand, gun is used as a defensive tool in the good-man persona’s case, he has no intentions of murdering anyone. 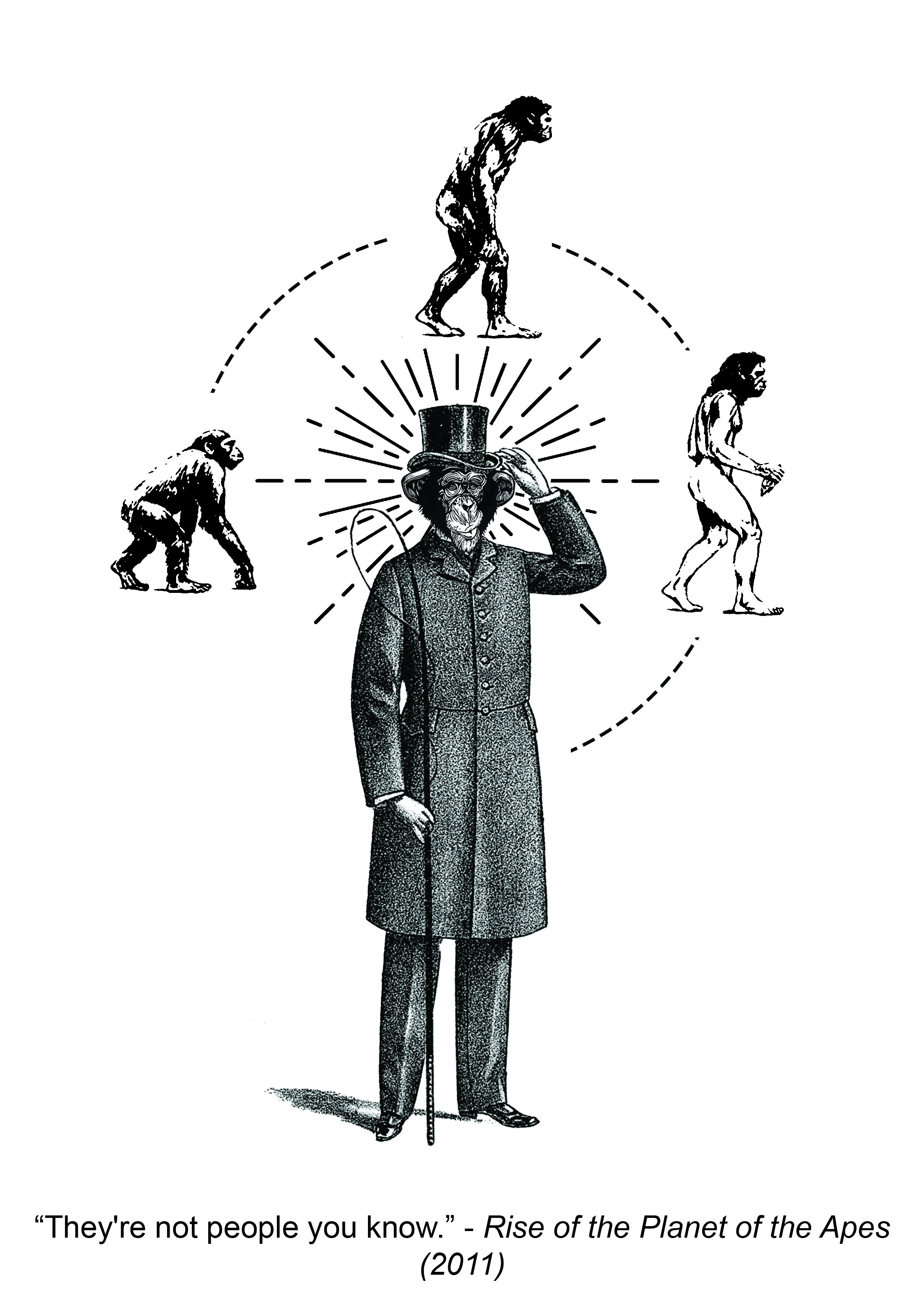 This design is a parody of the typical evolution chart that we often see in science. ‘They’ in the quote refers to chimpanzees in the movie. The character is saying that chimpanzees are merely animals. No matter how intelligent or human-like they are, they will never be on par as humans. As a result, my design depicts the final stage of evolution as an anthropomorphic chimpanzee, instead of a real human. It is to say that chimpanzees will never evolve to be fully human because they will always retain that animalistic nature in them. 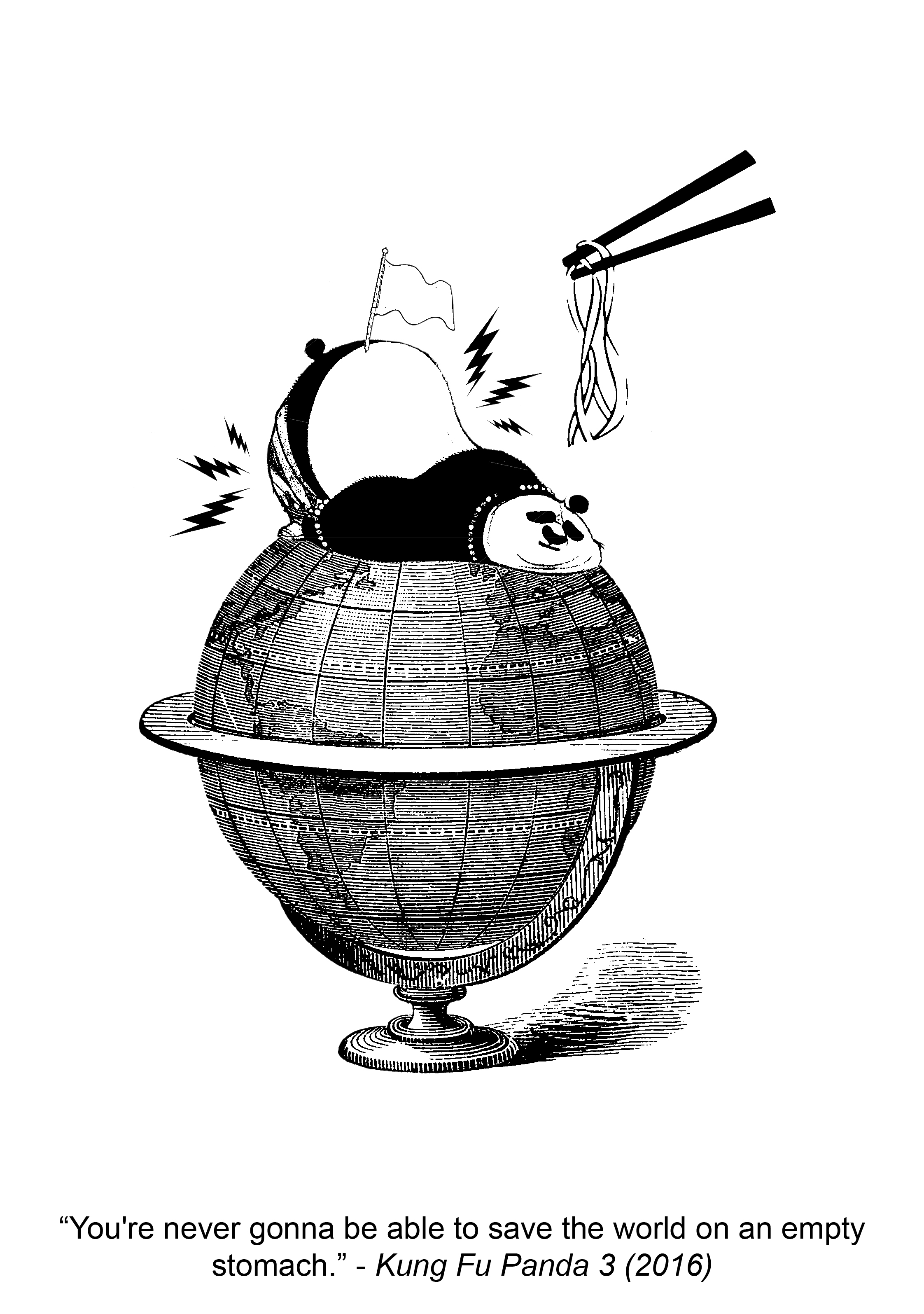 This design uses humour to convey how the panda has been defeated by his hunger, hence rendering him unable to fulfil his mission of saving the world. The defeat is portrayed by the dejected position that the panda is in. A white flag, which symbolises surrender and defeat, is comically stuck onto the panda’s butt. The only way to rescue the panda from this exhausted state is to simply feed him food, which explains the noodles hovering above him. Noodles, instead of bamboo, are the chosen food because Po (the panda in Kung Fu Panda 3) grew up eating his adoptive father’s noodles and those are one of his favourite food. The panda’s hunger is also emphasised by the growling sound that his stomach makes, represented by the bolt symbols. 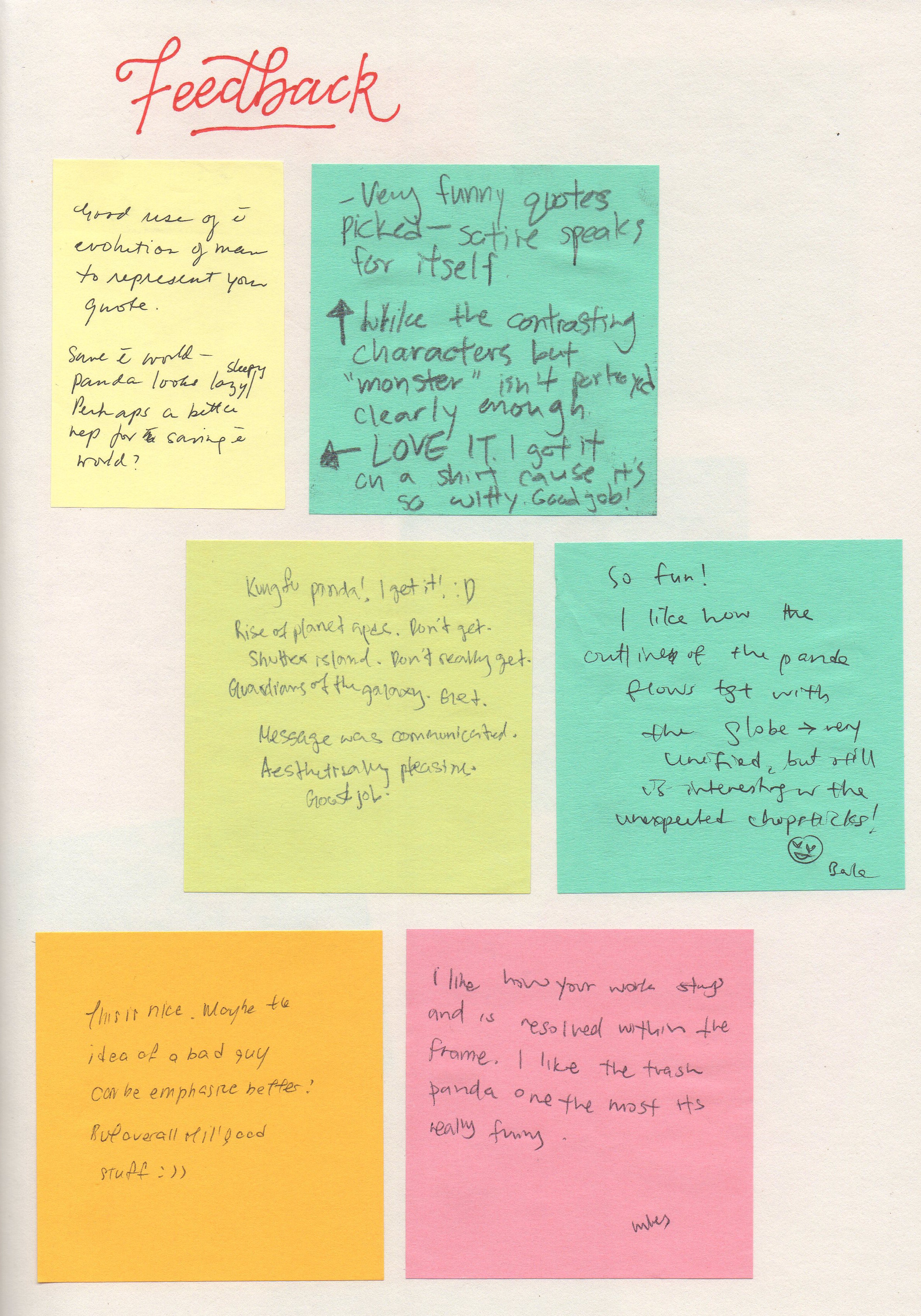 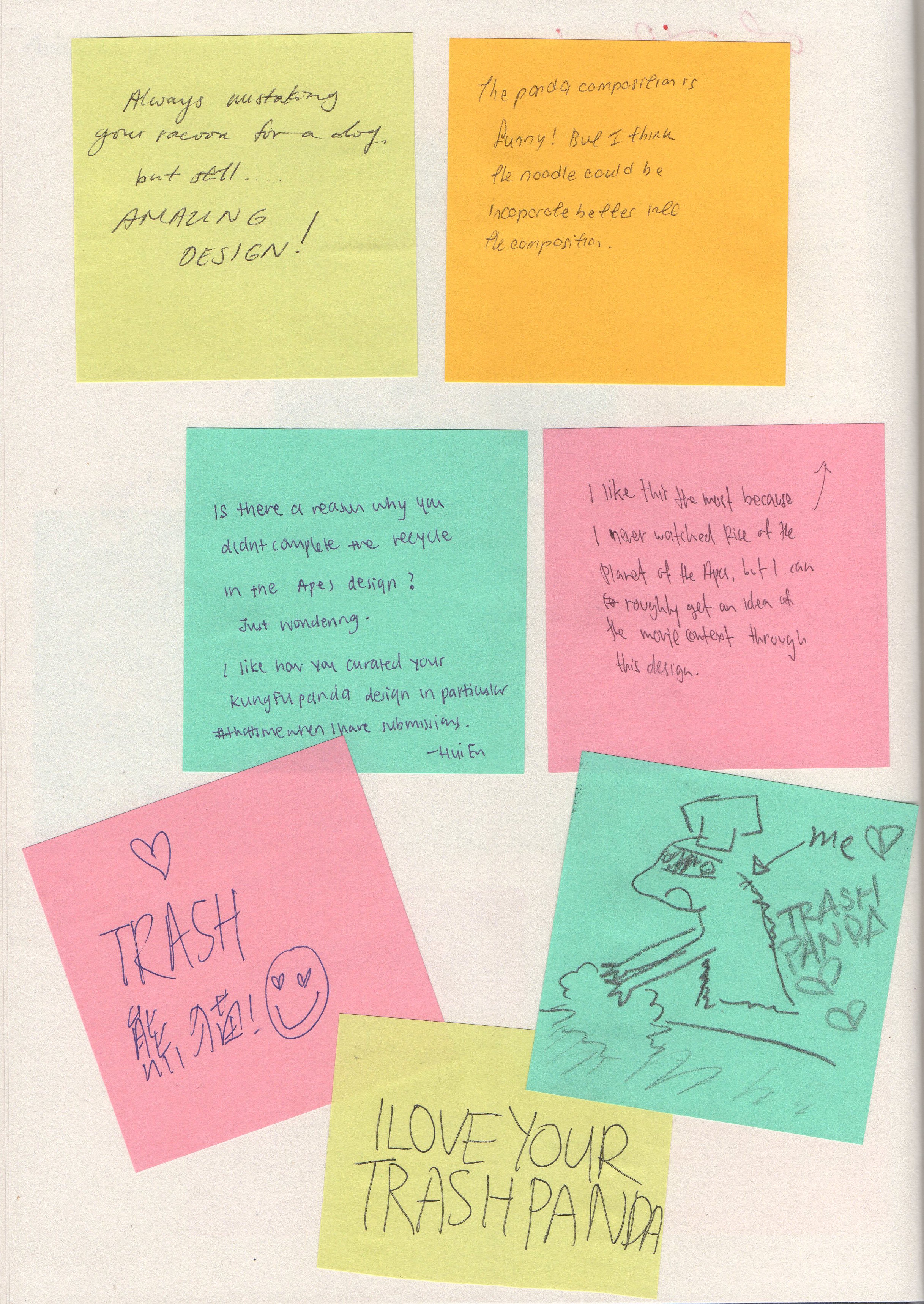 This project has been more challenging than I’ve expected. The biggest challenge was designing with the movie context in mind, but at the same time ensuring that the audience understand the design even if they haven’t watched the movie. I find it difficult to find that balance and ended up overthinking the designs. It’s easy to come up with designs that are a literal translation of the movie quote, but that wouldn’t make the design thought-provoking. Hence, this project has definitely pushed me to think out of the box by revisiting techniques such as symbolism, semiotics, etc, to convey the design’s message. These techniques can definitely be applied to any design project, and they can also create discussion topics relating to the project.