In this hyperessay, I will be highlighting the segments of the symposium that stood out the most to me, namely Annie Abraham’s performance ‘Online Ensemble – Entanglement Training’ and two of Blast Theory’s works, ‘Kidnapped’ and ‘My One Demand’. All the works that will be mentioned have one thing in common – they encompassed the concept of DIWO and interaction between the artists and participants. At the end of the day, it was the participants that made the project come to life. 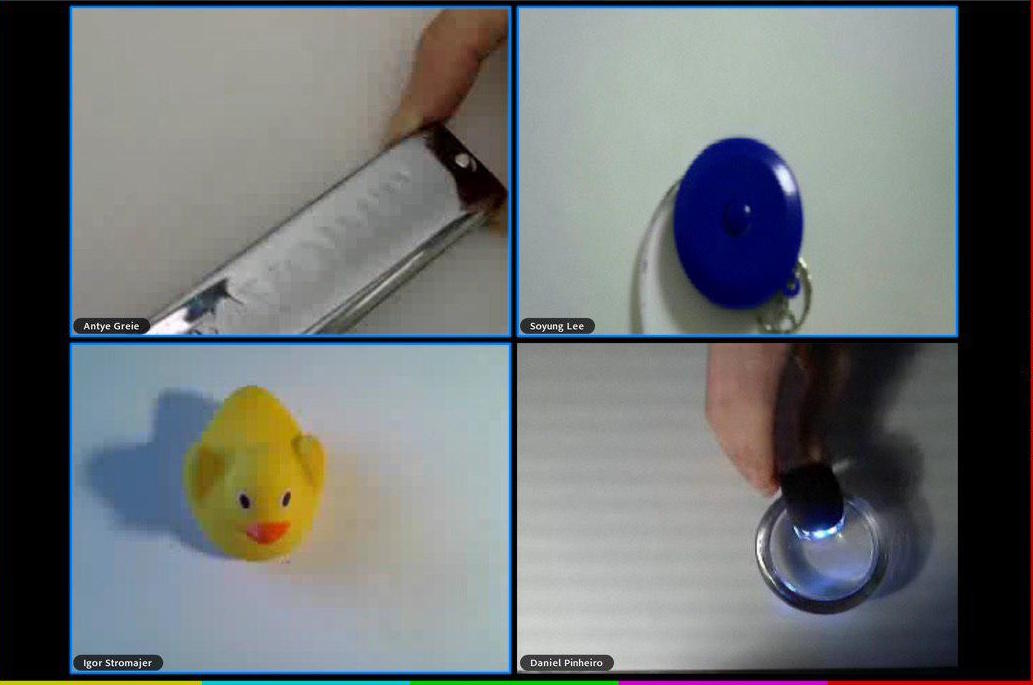 “In this new work we investigate how to be together in a connected world, where machines and humans have to communicate accepting partial overviews, glitches, time-lags, disrupting audience participation and ensuing disorientations. Abrahams considers the intra-active webcam performance situation a good apparatus to train and demonstrate entanglement. She wrote a script for seven performers with different cultural backgrounds. They will defy their own and the others’ ideas on performance and online politics in a conversational performance. In order to avoid chit-chat and to get rid of the distracting images of the faces she proposes to converse using objects, prepared phrases and voices. During the performance they create together a changing composition with the objects and improvise a sound environment with their voices and phrases. Because they share the responsibility for the performances’ acoustic and visual appearance it will be interesting to see how they negotiate their individuality and personal thoughts in this environment where they all have equal power. Contradictions, maybe even oppositions, as well as poetry can emerge in this collectively created complexity, where machines facilitate but also prevent. The performers research the limits and possibilities of their own agency in an attempt to be “with” while being separated.” – Annie Abrahams

The protocol can be found here.

Essentially, the entanglement refers to how humans and machine interact, giving it a sci-fi feel. This sci-fi feel is further enhanced at the beginning of the performance, when the performers repeat ‘Excellent’ in a monotonous voice, followed by reading aloud their latency. I felt that this component of the performance captured Annie Abraham’s approach towards her works very well. As the performance was conducted over the Internet with performers located at different parts of the world, it was inevitable that there will be issues of lag due to the Internet bandwidth, connection, speed, and other complications. I believe that most people would’ve tried to fix these issues so that the performance would run smoothly. However, since we are talking about Annie Abrahams here, she embraced these issues instead and addressed it in the performance.

“She clearly understands the inherent issues of bandwidth, distance, separation, and even alienation that occurs online. In fact, in many ways she embraces these issues and incorporates them into the vocabulary of her work.” – Randall Packer

Annie Abrahams is well-known for being flexible and adaptable when it comes to her performance art. Whenever there’s a ‘glitch’, instead of reacting in frustration and trying to fix the situation, she turn the tables around and incorporate the glitch into her work instead. This adaptability makes her works unexpected, making it a joy to watch. As I was watching the performance live, I was transfixed by the multiple things that happening at one go and I did not dare to blink because I wanted to capture every single moment with my eyes. 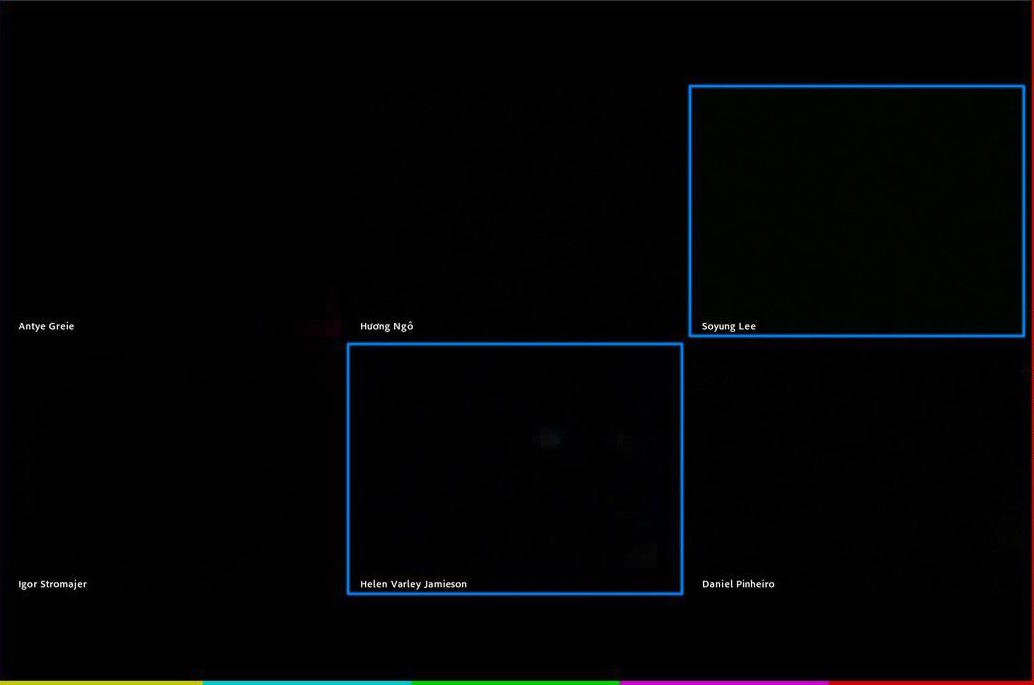 Another aspect of the performance that I enjoyed was the incorporation of sounds and phrases. Some sounds include, humming, clicking sounds made by the mouth, harmonica, phrases, etc. This eclectic array of sound adds on to the depth and ambience of this performance. What is amazing is that these sounds are improvised yet they still harmonised together very well. I believe that it is precisely because they are improvised that makes this sound texture so unique. It’s not something that can be replicated through precise rehearsals.

I applaud the performers for pulling off such a performance without much protocol or specific directions given to them. As they had to rely on one another for cues, reflecting the spirit of DIWO. 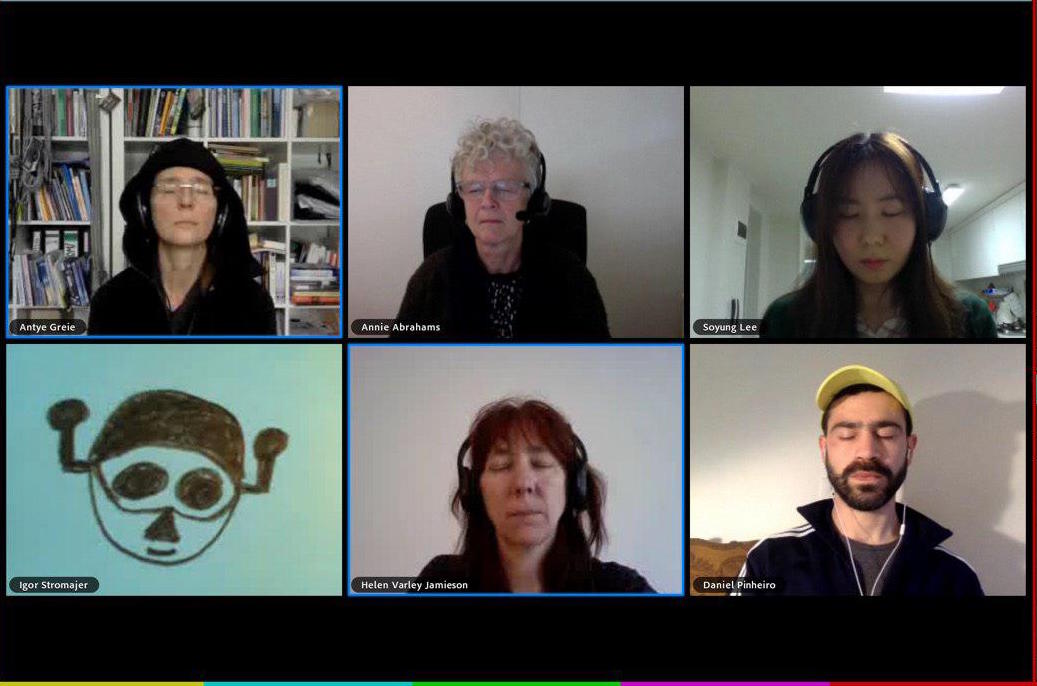 Matt Adams, the founder of Blast Theory, was invited to speak at the symposium as well. Of the various works that he mentioned, I was most intrigued by ‘Kidnapped’ and ‘My One Demand’.

“Audiences are never present as witnesses – they are asked to immerse themselves in an experience, take an active part in the development of a piece by performing certain actions, making choices, playing a game, making decisions that will shape their own and others’ experience of the work.” Maria Chatzichristodoulou, Blast Theory

Entrants paid £10 to enter a lottery in the hope of being kidnapped. Ten finalists were chosen at random and put under surveillance. Two winners – Debra Burgess, a 27 year old Australian working as a temp and Russell Ward, a 19 year old from Southend working in a 24 hour convenience store – were snatched in broad daylight and taken to a secret location for 48 hours. The process was broadcast live onto the internet. Online visitors were able to control the video camera inside the safehouse and communicate live with the kidnappers. During the run up to Kidnap, a 45 second video Blipvert was shown at cinemas around the UK.

This project was a response to the notorious Spanner Trial, consenting sadomasochists were convicted and sent to prison This trial was a controversial issue because technically, the people that were involved gave consent to allow torture to be induced on them and all these happened in a private setting. However, they were still charged for assaulting others and bringing harm to them.

‘Kidnap’ incorporated various ideas such as consent, lottery culture, psychological investigation etc. This was an elaborate and complex project that was witty, bold and peculiar all at the same time. When I heard about this project, my first thoughts were, why would anyone pay to get kidnapped? What’s their motivation? To experience kidnap in a ‘safe’ way? For fun? At the same time, I found it comical that entrants could curate their ‘ideal kidnap’ using the application form that was given to them. 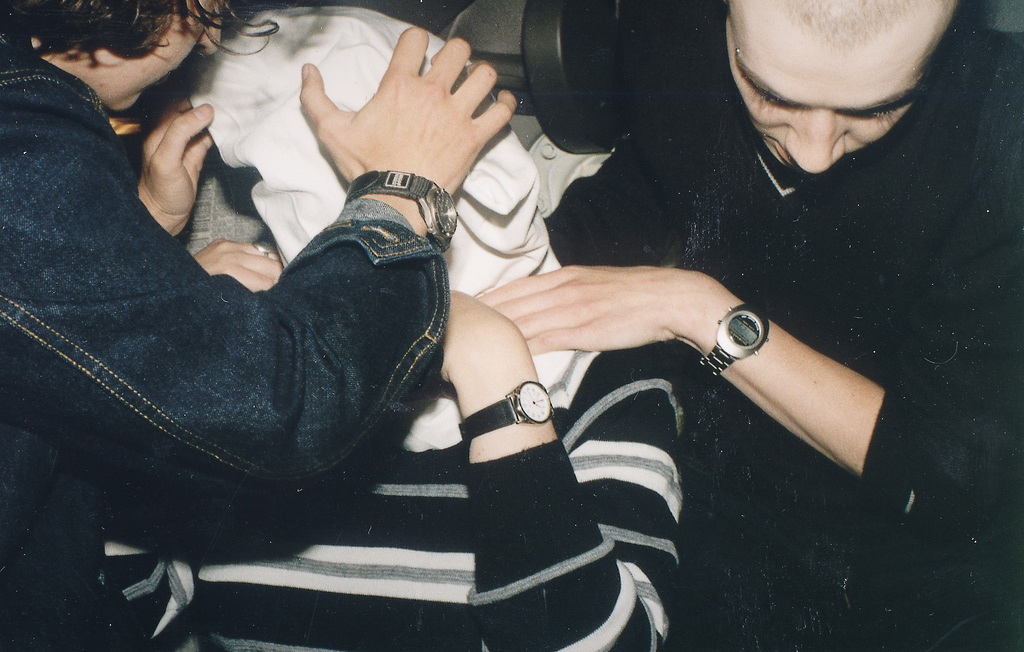 “Because once you put a bag over your head, it becomes very real” – An interviewee in ‘Kidnapped’ documentary

Secondly, would there be a point where the victim’s sense of reality gets warped and started to believe that they were in real danger? Forgetting that they signed up for this. Here, the line of pretence and reality gets blurred and could potentially scar the victim’s psychological state forever. I felt that this was a risky project to pull off because the question as to whether it crosses the line of being illegal is unclear. It could very easily end up like the Spanner Trial – the participants may have given consent to be kidnapped, the law may still view it as another case of kidnap and convict the people of Blast Theory. Well, thank God that the project was successful and even got media coverage from various big news outlets such as The Guardian and The Daily Telegraph.

Bringing the concept of DIWO back into the picture again, this project required the participation of the entrants, kidnapped entrants, as well as online participants in order to work. Their responses made this project realistic and interactive as well.

In My One Demand seven people stride out across Toronto in an interactive film about unrequited love. Starting with a baby in the arms of a woman walking out of Toronto General Hospital, we follow seven people – one at a time – as they move through the city as darkness falls. Each of the people we follow is older than the person before. Each person is very different from the next. As each person walks on, our narrator tells us about them and about herself, about the city here and those farthest away. 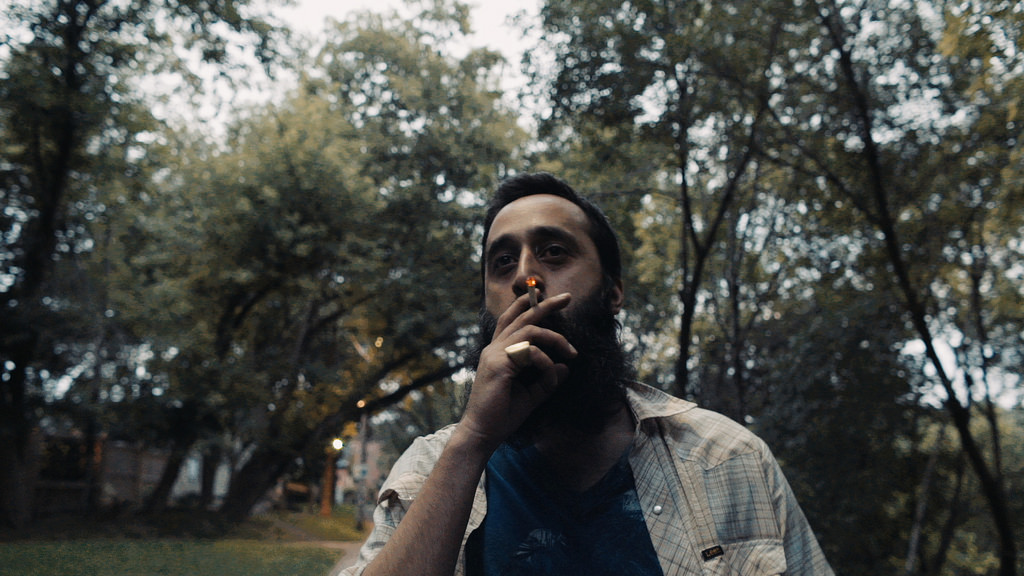 As compared to other Blast Theory projects, this film was a work of cinema and had greater ambition in term of the visual language. Closer to home for Mark Adams since he specialized in theatre before. Unlike typical films, this film creates a sense of immersion with the element of interaction. This was achieved by filming the film live in a single continuous shot. Audiences can interact with their mobile phone or computer in real time. The narrator of the film will adjust accordingly and read out the stories that the audience had submitted. Hence, the film evolves according to what the audience sent. 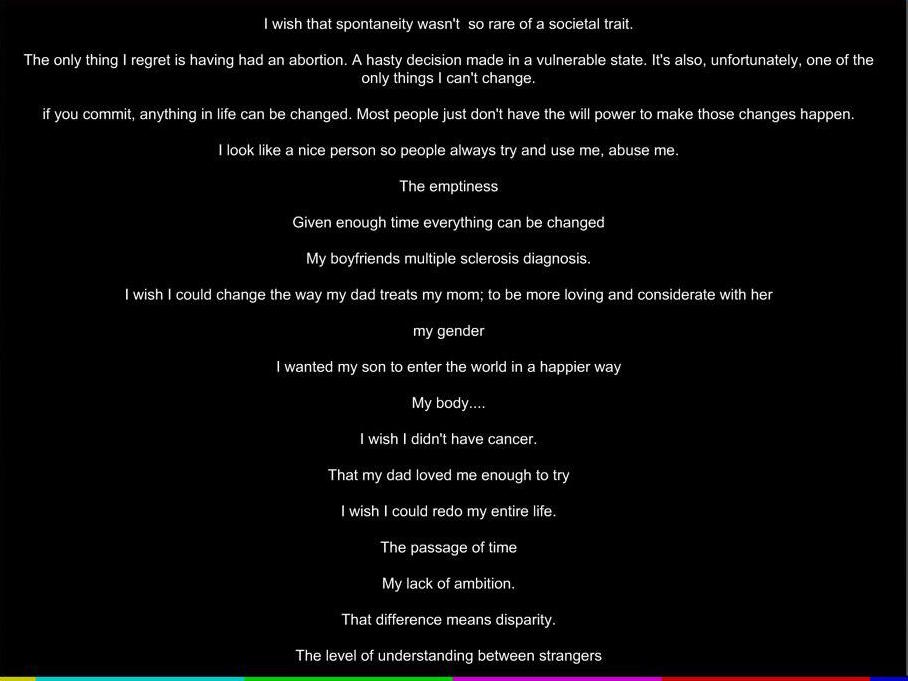 The overall tone of the film was melancholic and so was the theme. At one point in time, audiences were posed the question ‘Is there something you want to change but can’t?’. The responses were all rolled out during the credits. Mark Adams had expected audiences to leave the cinema after the film, but all were transfixed on the responses. This is a very personal question and it requires one to be willing to be vulnerable in order to answer this question. As such, a space of openness and relatability was created since some might even relate to other people’s responses. It’s the first time that I’ve come across an interactive film like this one, where audience get to interact with the film live. It must had been a very immersive experience and interesting to be able to hear other people’s personal stories. It’s not something that one gets to experience every day.

Blast theory’s projects take a typical situation and turn it into something else. For Kidnapped, they changed a kidnap scene into one where the participant was willing and expecting to be kidnapped. For My One Demand, they strung together the stories of seven individuals into a continuous narrative, and weaved the audiences’ stories in as well. I’m blown away!

Overall, I enjoyed the works that Annie Abrahams and Blast Theory had presented. I find the works to be unexpected and genuine. Hearing them talk about their works and getting a glimpse into their thought process was a great experience! I hope that I too will be able to achieve something like that some day too.