Looking down at his floppy belly, Kokopelli realised that he had been gaining weight! Hence, Kokopelli decided to make a belly workout gear to motivate himself to get back to shape! To challenge himself further, his workout gear has to incorporate the following sound qualities: squeak, elastic medium, and threshold of pain.

And behold… join Kokopelli on his weight-loss journey and his amateur dabble into fashion design. This is the beginning of the Kokobelly Workout Gear! (If it’s a hit amongst the villagers, he might consider making a business out of it.) 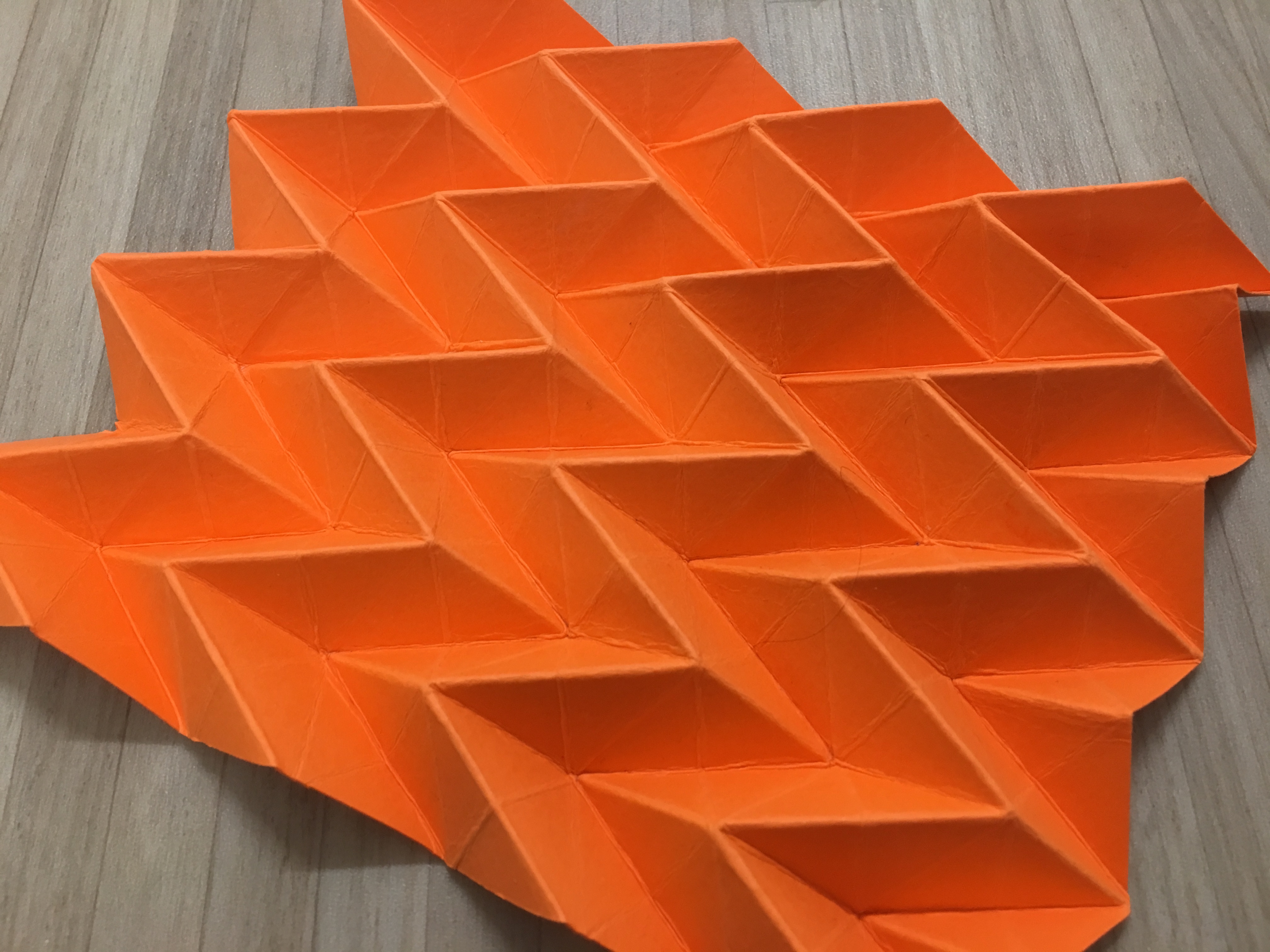 Kokopelli decided to incorporate the Miura fold into his design because this fold is flexible and bendable. It is able to hug his belly and adapt according to his belly’s positions, such as when he bends forward and backwards, sideways, and when he sucks in and expands his belly.

The Miura fold isn’t as complicated as it looks! The steps are rather simple, but Kokopelli has to admit that it’s pretty tedious since he had to ensure that all the creases were well-creased and accurate. 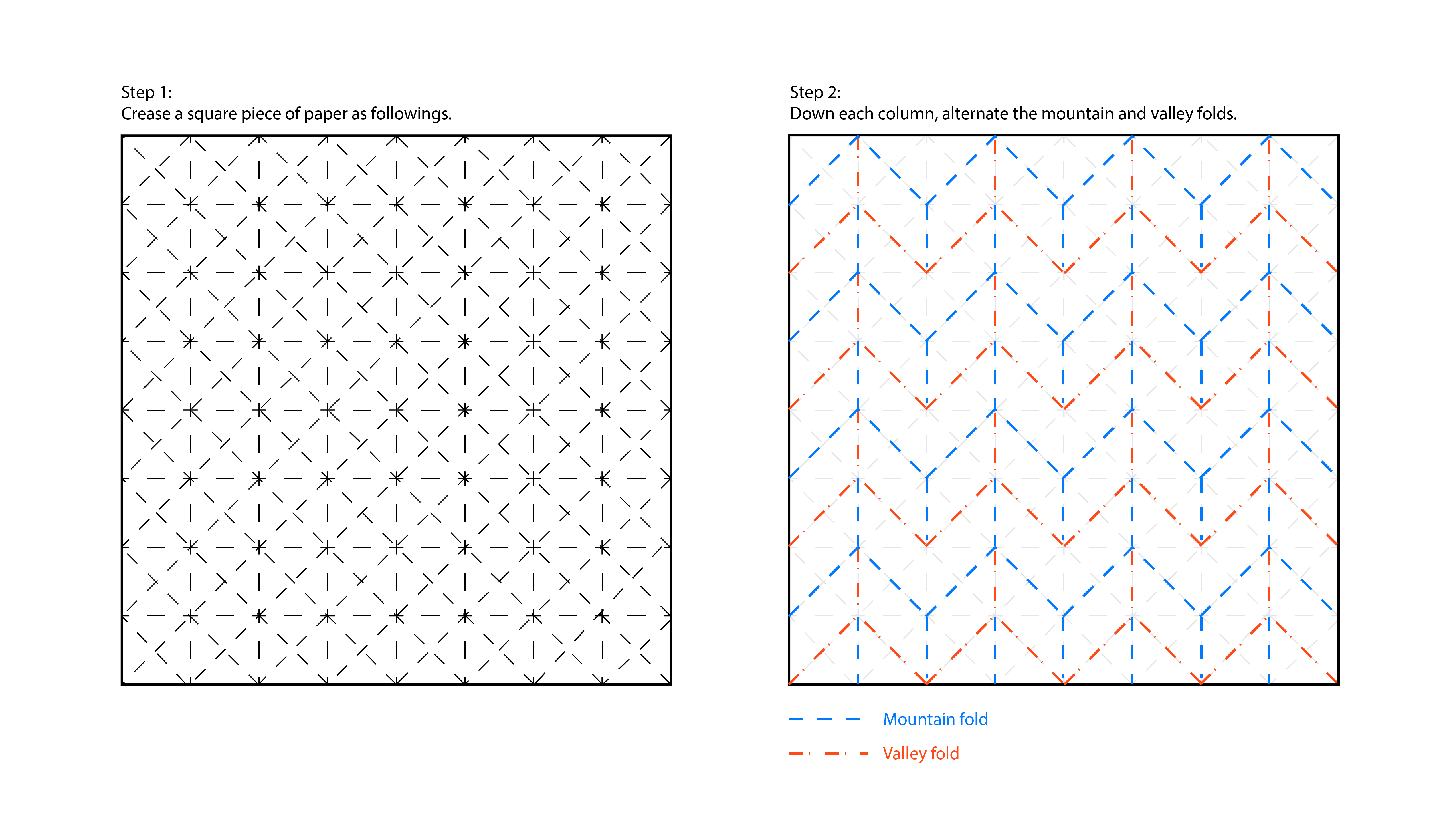 Since Kokopelli is the spirit of music, the workout gear has to incorporate some sounds. Kokopelli is able to achieve this by embedding tiny needles between two sheets of miura fold origami. You must be thinking, needles?! That’s so dangerous! Well, not to Kokopelli because it’s a reminder to him that when there is no pain, there is no gain! When shaken, the needles will move about within the two folds, creating a rattling sound. 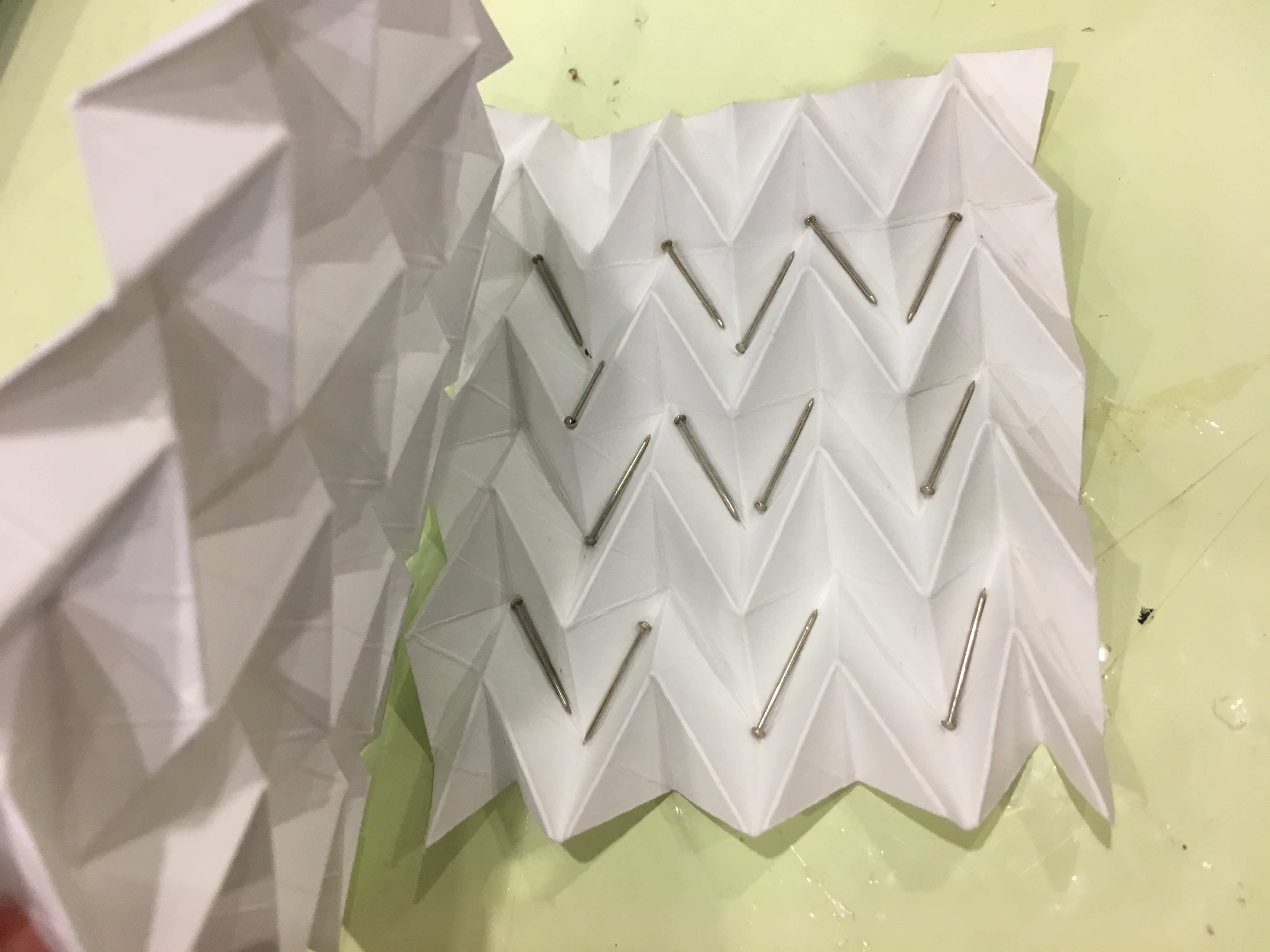 Wrapping folds around the belly:

To attach the Miura folds, Kokopelli opted to sew them on since he thought that thread would be stronger and longer-lasting than glue.

As Kokopelli tried on the workout gear, the stretching of the fabric actually tore the threads out! He deduced that it’s because the stocking fabric was too porous and hence the thin threads were able to be pulled through. Kokopelli’s heart was broken because all the hours of meticulous sewing were wasted. 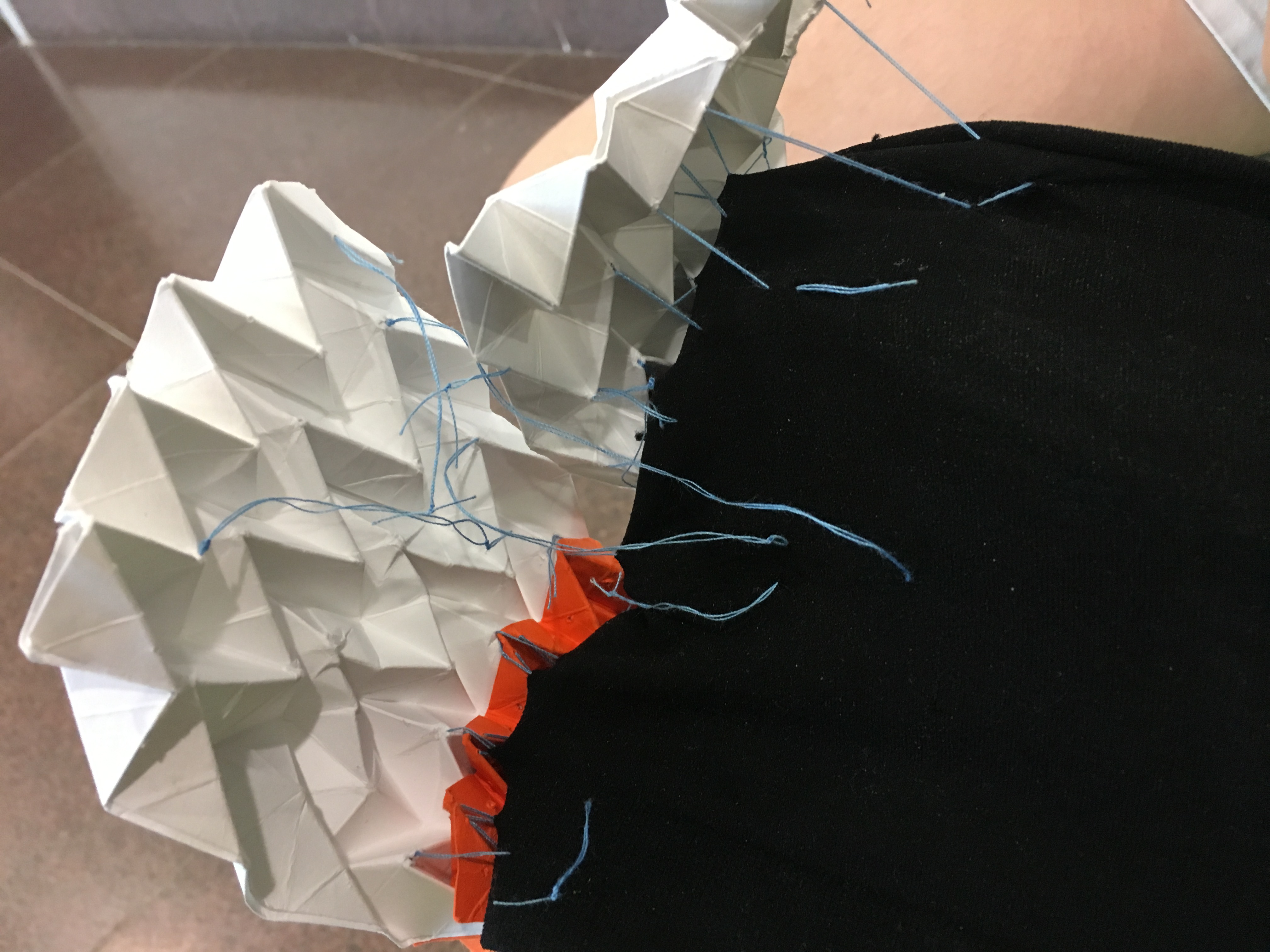 To counter this problem, Kokopelli decided cut open the stocking and treat it like a corset instead of a belly tube top. This would allow him to get into the workout gear more easily. To fix the folds, he decided to use super glue to glue the folds to the stocking. He wasn’t sure if it would work on fabric but lo and behold, the super glue did manage to get the job done. He could’ve just used super glue from the start instead of going through the trouble of sewing… Oh wells, at least the problem was solved. 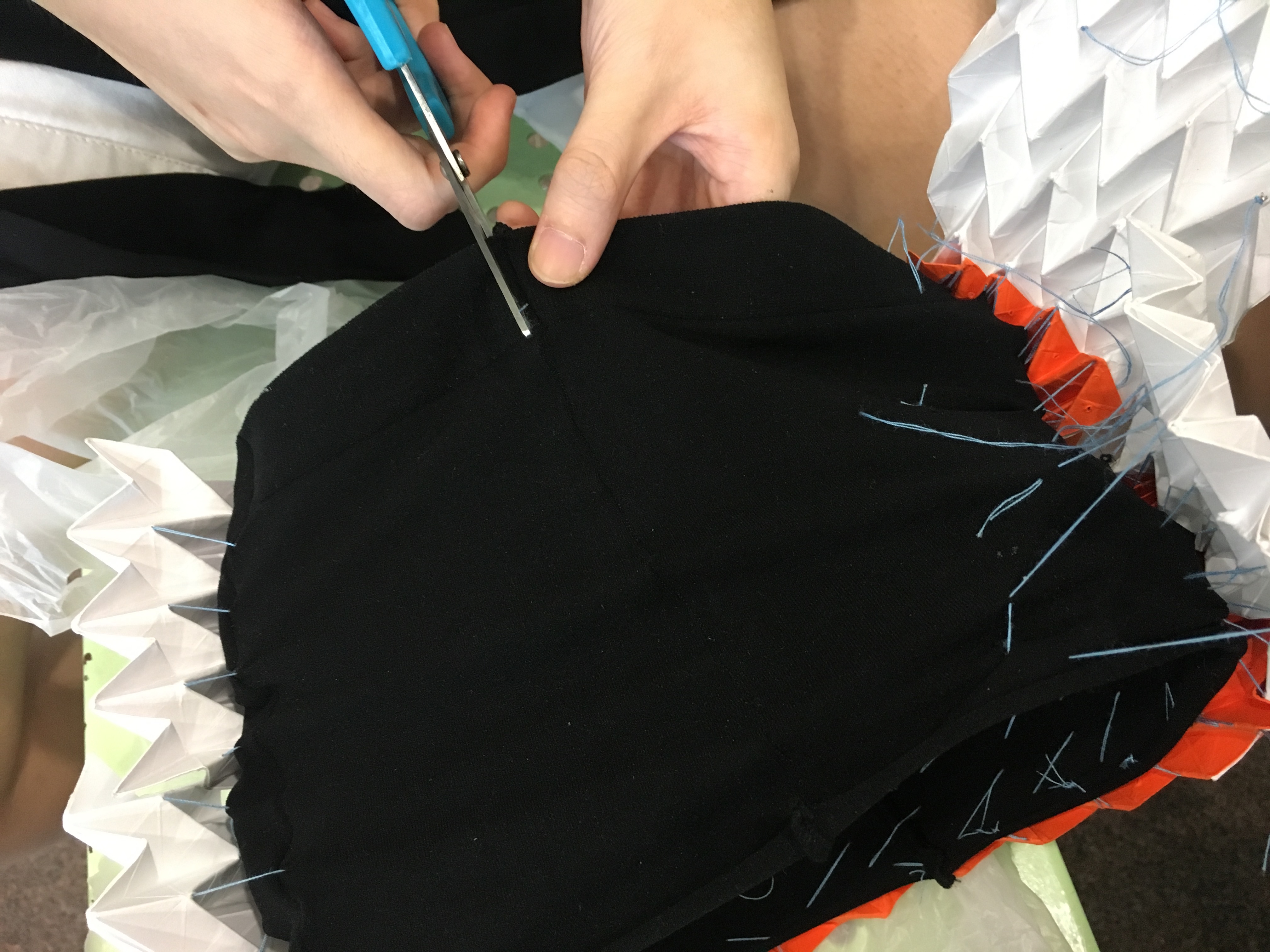 Now that the first component of the workout gear was completed, Kokopelli started working on the second major component – the ‘tutu’. This ‘tutu’ aims to create sounds by shaking it from side to side. 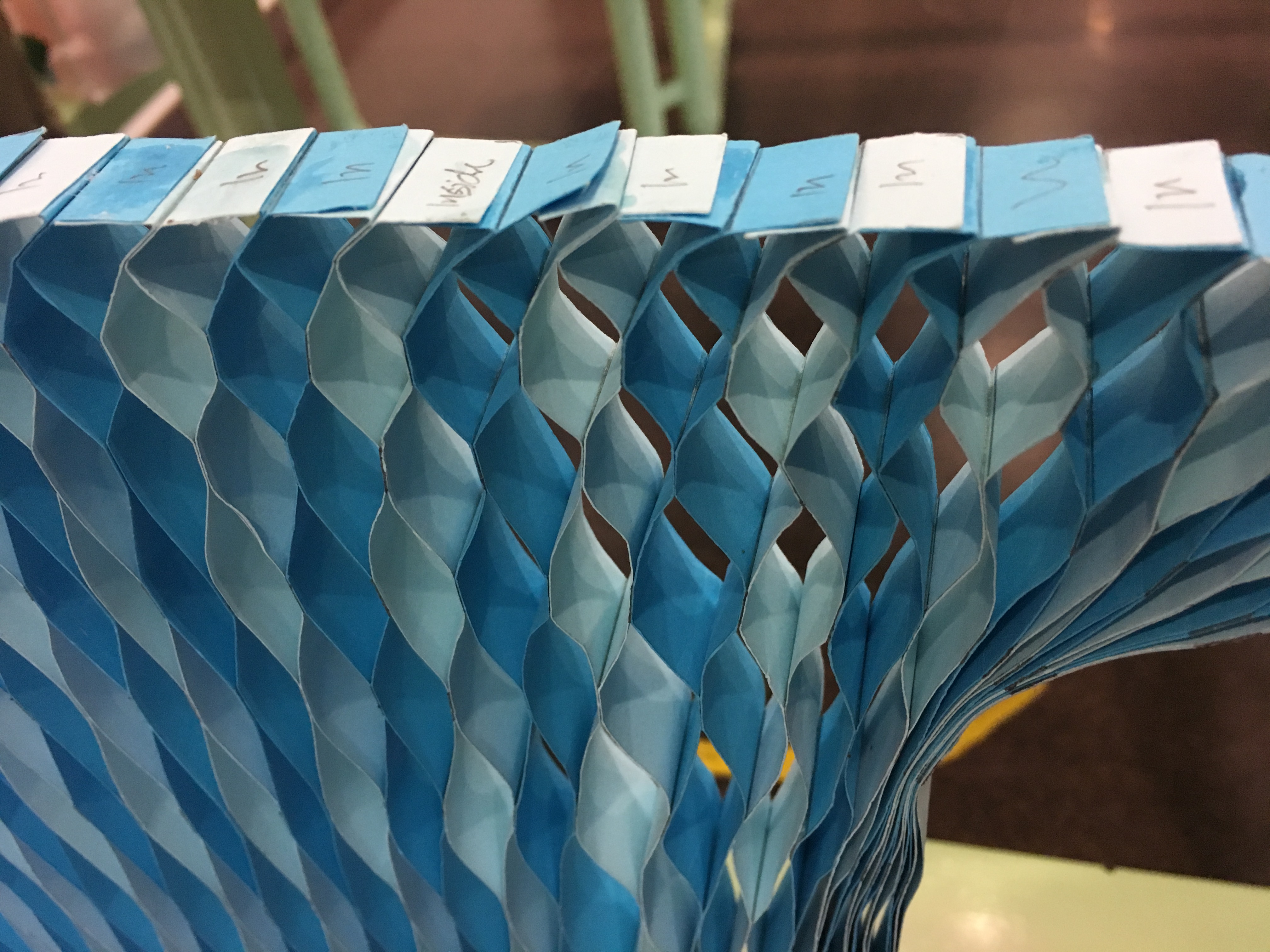