Look at Existing Events that are similar to concept.

i light marina bay is a 3-week light art festival that presents light installations designed by artists around the world, within Marina Bay. At the same time turning off lights of the buildings around and using the light installations to illuminate the place. 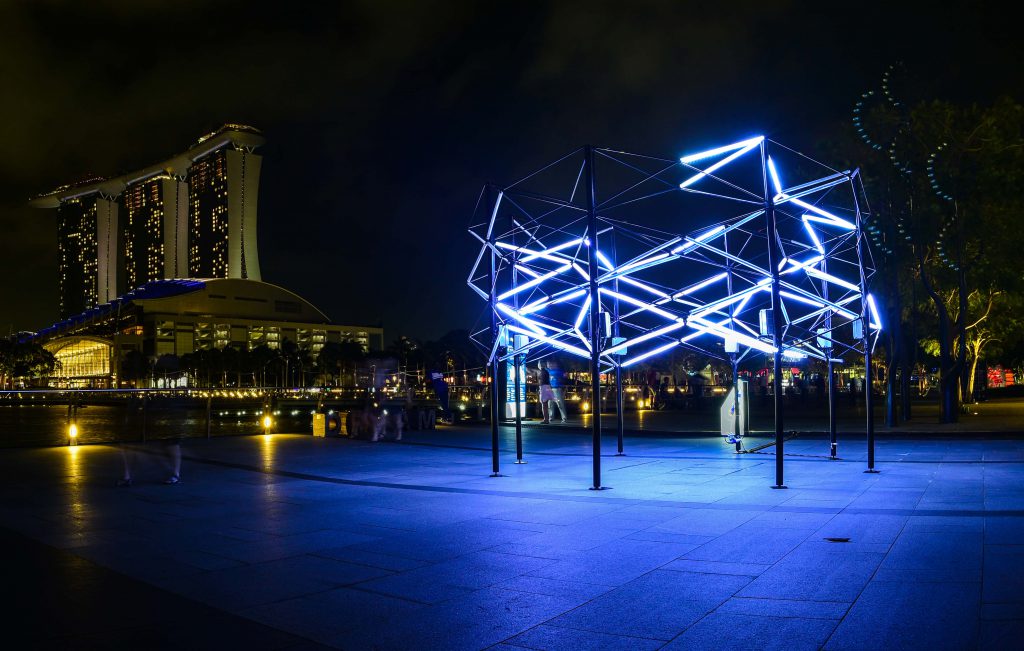 i Light Marina Bay too supports the idea of sustainability through the ‘Switch off, Turn Up” action, where offices are encouraged to switch off lights and turning up air-condition temperatures.

We feel that i Light Marina Bay supports our installation idea, our message of screen-based experience has a deeper meaning and content to the poetic screen-based portray.

Message to be finalised with more research.

Look back at the researched animals, trees and man-made infrastructures and came out with a Life-Cycle table. 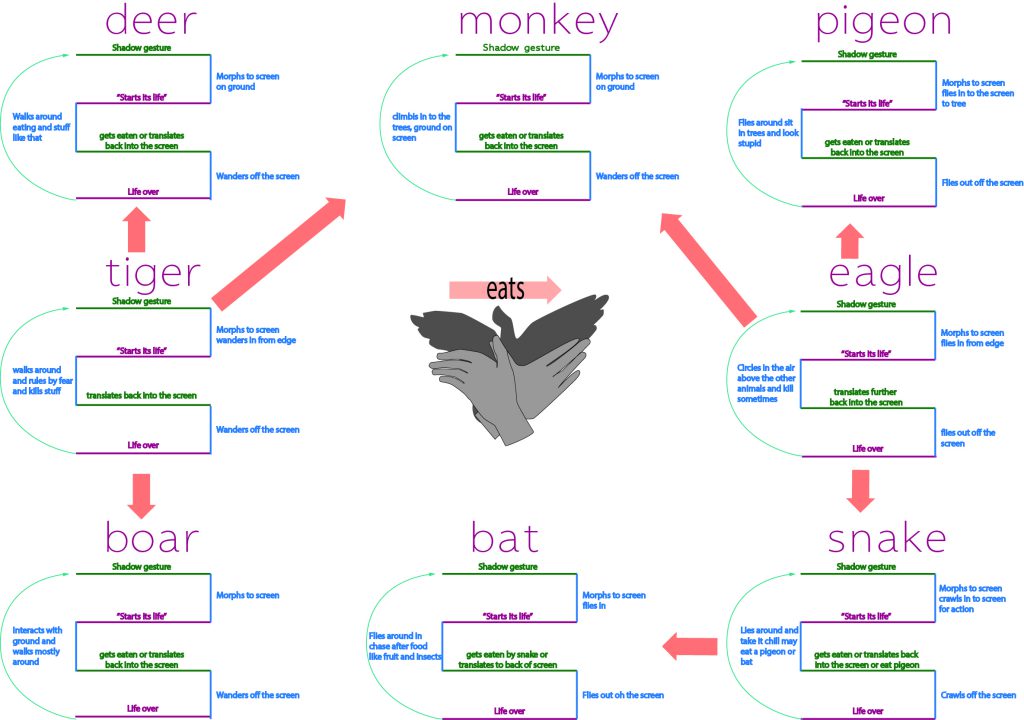 Considerations of the amount of animal types as  too much may resulting in confusion of gestures. We do NOT want to overcomplicate the gestures which will hinder the fun of the screen-based experience. Gestures considered has to be simple and relatable.

Amount of animals, trees and man-made infrastructures to be finalised.

On-screen experience based upon the chosen site (Supertree Grove). 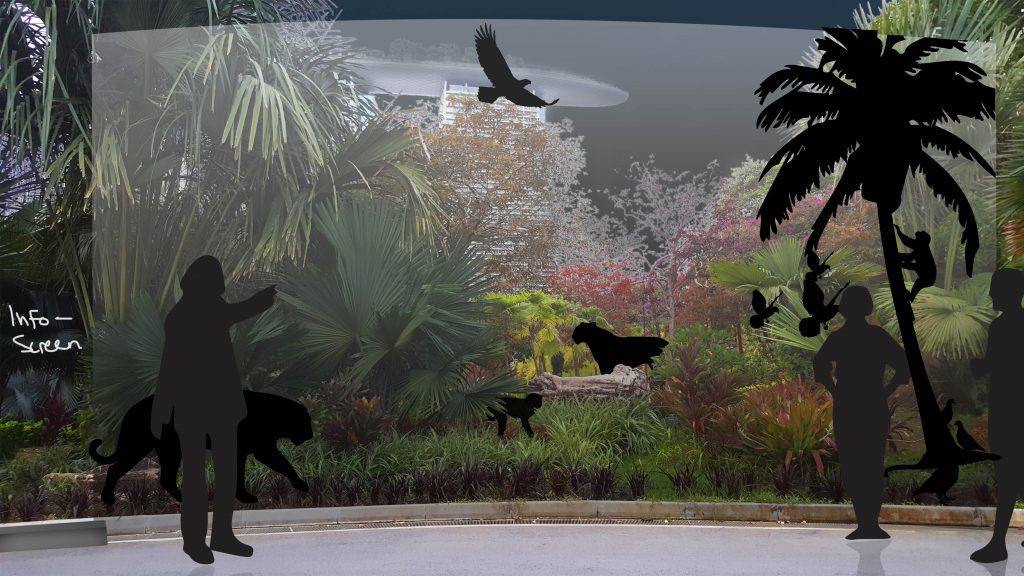 Usage of physical backdrop, and incorporating the screen-based technology.

Visualised based upon the size of the proposed screen canvas. Considerations on whether the experience can be optimised with the amount of animals on the limited canvas.

DEPRECIATION OF THE WORLD

Consist of wildlife in Singapore. Research is based upon Endangered animals and Types of trees. Majority of animal wildlife consists of marine / entomological organisms while Land animals are constricted to a few.

To have the installation placed in the context of a park will warrant a stronger message.

Chinese Garden does not exactly portray the whole concept of sustainability, rather more spiritual and orientality. Therefore, defeats the installation.

Saw a coherence with our theme as the Gardens by the Bay puts effort into inculcating sustainability. Chosen Context.

Went to visit Gardens by the Bay for site exploration and deducing the spot to place installation. 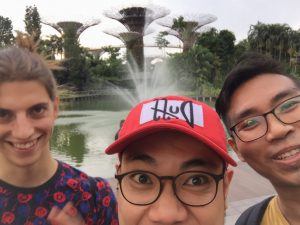 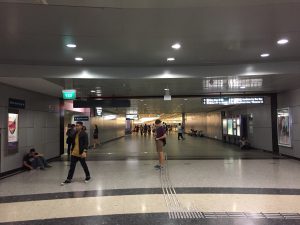 Finally decided the spot to be at the site of the Supertree Grove.

Site of the Supertree Grove has a laid back atmosphere. With the space around the ground of each individual ‘Trees’ serving as a platform for rest and relaxation. The Supertree Grove is perhaps the first site that allows congregation within the Gardens.

People gathered here are of all ages. Some even setting up a picnic for their group. Many people are sitting down, others laying on their back.  Also, there is a paid trip up to the bridge ontop the Supertree Grove which warrants a long queue, but the platform allows rest while waiting.

Furthermore, at around 7.30PM, there is a showcase of a light show using the branches of the Supertree Grove. There is a coherence with our installation, which plays with light and shadow.

We feel that the site is perfect for our installation as the narrative requires the users to ‘watch’ for a period of time, therefore choosing a site where people will go to rest will be ideal.

DEPRECIATION OF THE WORLD

Based upon the common themes of the 3 projects merged into 1:

A Window to another Realm.

DEPRECIATION of the WORLD

Depletion of animals in Singapore due to constant emergence of buildings and clearing of land to accommodate growing human population.

To raise awareness of the endangered species of animals in Singapore and the environment through an interactive screen-based installation. To send a message that questions Human Methods through Human Interactions.

An interactive screen-based installation that makes use of Shadow Gestures from the users, to form an interactive narrative that dictates the balance/ imbalance of constant human activities versus wildlife through the user’s interaction.

+ Use of human experience by human interaction through shadow gestures of animals/ trees.

+ Screen captures the shadow gestures and translates the form of animal/ tree into the narrative screen that depicts another realm. Visuals consist of silhouettes of animals / trees.

+ Users are able to experience the interaction of wildlife in their natural habitat through the depiction of the other realm in the screen.

+ Screen also serves as an interaction platform. Touching the animals will show animation of the animal dodging user. Touching the trees will turn them into buildings. This depicts the poetic notion of human intervention in the environment through literal human touch.

+ Sustaining the experience of balance between the wildlife and the modern technology of buildings will warrant users to keep ‘planting’ animals and trees into the realm whilst trees will continue to transform into man-made architectures like buildings, HDB Flats etc.

+ As such, with more buildings sprouting, the animals will disappear. Eventually, the buildings overwhelm the wildlife and constant sprout will eventually fill the screen as black.

+ End of one cycle with a text that raises awareness (TBC)