I decide to look back at the concept as a whole. I realised that the utility of mechanical and electronic machines can be classified according a timeline of each inventions. As I began to look back, I traced back the inventions to the period of Industrial Revolution. Naturally, I thought about ‘coal-carrying’ steam trains and inventions of manufacturing greased-up robotic machines.

Thus, I chose charcoal and oil to be one of my mediums.

I looked at Youtube to see how I can utilise charcoal and oil to be my medium.

Following the Youtube tutorial, I crushed charcoal and mixed danish oil in slowly until I got a pretty good consistency. (Initially I added linseed oil, which turned out to be too thick and resulted in a clump of wasted charcoal) 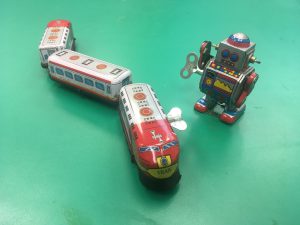 Making use of the wind-up mechanism, I used a wind-up train and a wind-up robot to create the first series of pattern.

The results were fairly acceptable. The generated patterns are as follows:

Whilst creating the first composition, my hands were stained with charcoal and oil. I decided to utilise the scenario and placed a tracing paper on my Macbook keyboard and Mouse. Therefore while using the Macbook, I was creating more patterns.

An interesting observation is that I made use of the backspace button a lot. Anyway the resulted motif may be difficult to incorporate into the pattern.

I am intrigued with the parallels between Morse Code and Binary Code. The mechanical language of the morse code versus the digital language of the binary code. I decided to invert the creation of both languages with the opposite tool.

First, I translated both morse code and binary code through the use of generator. 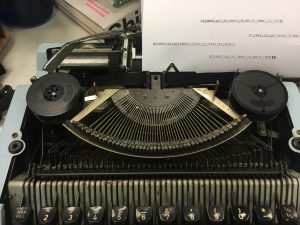