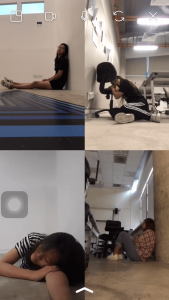 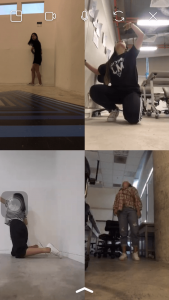 For Micro-Project 3, we experimented with the video call function on social media, in our case, instagram, to perform a piece. We crafted a storyline of 4 girls being trapped in a house after being kidnapped, and used the split screens to signify 4 different neighbouring rooms in the same house. We chose different spots in adm (in classrooms, outside along the corridor, in the toilet etc) while video calling, and even though we were in a different physical space, we played with the idea of the split screen on our phone screens to create another space (‘house’) that had many rooms and that we were in rooms only right next to one another.

Through this, we better understood the creation of a third space as well as the idea of Do-It-With-Others (DIWO). This project’s final product was only possible because our teams worked together for the final product through the use of social media tools.

Our group initially had a script we wanted to follow so that we were able to finish the narrative the way we wanted it to be. But as time passed and the number of failed attempts taken, we realised that it was faster and more efficient if we just improvised on our own, and hence we threw away the idea of following the script. Moreover, the order of the screens differ on each screen, and hence made it even harder for us to coordinate since we were at different physical space and needed to follow the order of the screens on the phone screen that was in charge of recording. The third space that we created was also easily disturbed by outside online platforms such as whatsapp, as shown below. 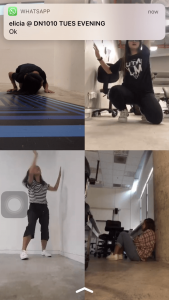 Out of the 3 Micro-projects,

1. The project I felt that I had the most

over was the second micro-project, crowd-soured art. This was because although my group’s project was based on the responses that were collected on instagram story’s poll function, the final art piece we envisioned to make was still based on us (the artists) and whether we choose to use the data as it is or tweak it to adhere to our ideas.

2. The project with the most

would be the third project, the project above. We initially wanted to follow a script and had spent most of the time planning out our scenes, but yet when we were filming, nothing went out way and we ended up improvising everything.

3. The project the best illustrates the concepts of

was the second project, which taps on the use of a public platform that the public has access to (albeit it being instagram – with the limitations being that only users with internet and an account with instagram will be able to access), and at the same time engaging with the public to influence our art.

DIWO allows many more possibilities to art as compared to individual art/making and hence introduces many more ideas and creativeness into the art scene. Open source is inclusive given its public nature and allows active participation to the once passive audiences. Now, audiences can become co-creators, opening up new beginnings and new inspirations to the art scene.