Bold – What is said by the tester

We wanted to stimulate the feeling of loneliness offline when someone is connected online through a physical manifestation of loneliness. Hence, when the participant tweets, the cooling pad on his/her neck will turn cold.

Plan for Body-Storming in class 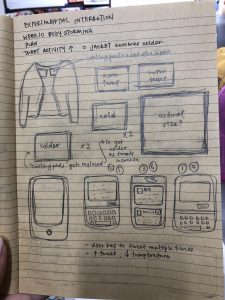 We cut out cardboard “cooling pads” and cardboard phone screens to simulate the tweeting process and the process of the temperature drop. 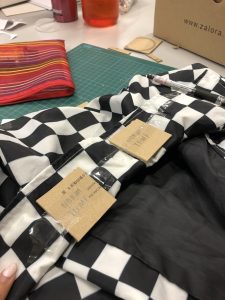 We cut out small pieces of cardboard and stuck on the collar of a jacket to simulate where the cooling pad will be. 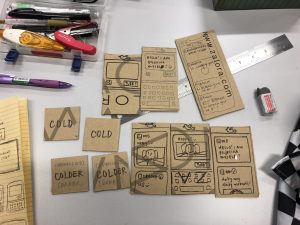 We also prepared a cardboard phone and different phone screens to simulate the participant’s tweeting during the body-storming process.

During the body storming process, we then changed the cardboard according to the situation.

The body storming process allowed us to observe the possible interactions others will have with our project and the interaction helped to point out possible challenges and possible unclear points in terms of the presentation of our installation. When we were doing the body storming, we used pre cut cardboard to signify the phone screen and wrote pre made tweets on the cardboard. Hence, the tester of our installation was confused when using the cardboard phone to tweet as tweets that “she did not type” appeared, but this would be solved when the actual twitter interface is used.

Also, we wanted to try out which part would be the best to have to place the cooling pads (Peltier Module), and tried to put the cardboard mock ups at the neck area of the jacket. The feedback given was that she felt “weird to have sensations on her neck” and hence we decided to fix the location of the cooling pad on the neck area.

For our installation, the more the user tweet, the colder he/she will get. The feedback given was that there were no specific instructions and hence the user may not continue tweeting or may not want to continue tweeting due to the cold. Hence, this is a problem that we have to try to solve for our final project presentation.

I learnt that having the installation out of context (if we displayed it just on the classroom table) might not have that much of an impact as compared to building a mini “set”. I also feel that we might need to have an instructing voice behind the exhibition (the voice of social media itself) to keep the participant engaged.

Our project was pretty straightforward and the cause and effect was clear, and hence the participant was not confused other than the tweeting part. The process was pretty smooth sailing and clear for the participant (“clear what the feedback is”), so what was surprising for me was only the part where the pre-written tweets confused the participant as we did not intent the tweets to affect anything and didn’t think that the tweets will affect the interaction.

That the participant can “hack” the project by refusing to continue tweeting.

3. How can you apply what you have discovered to the designing of you installation?

We could provide a better context (instead of just having only the phone and the jacket) and/or relay better instructions to the participant participating in our installation, for example, we can try to build a scenario where instructions can be better relayed and hence the user will then be able to be less confused and also ensure a smoother execution of our intention for this installation.

Based on some feedback on other groups too, I think our current installation is too straightforward and there is no clear reward/punishment system, i.e although there is a clear relationship between the tweet activity and the temperature on the jacket, there is no reward or punishment system or a proper ending to our installation and hence I think we can work on this area more and establish a better way to tie up our entire project/ better way to end the experience for the participant experiencing our installation.

Adding more context by placing the entire exhibition in a “situation” as well as adding instructions would be beneficial to the success of the project.