Critical Making is a term coined initially by Matt Ratto in 2008 and first used in 2009 to describe the combination of critical thinking and hands-on reading. It seeks to combine material engagements with technologies to make social statements, opening up and extending critical social reflection. It combines ‘critical thinking’ and ‘ making’, acting as a glue between the conceptual theory and physical hands-on work. Critical making also has similarities with the practice of critical design, in which both pushes users into more complex emotional and psychological territory by questioning social norms and stimulating discussion and criticism of design itself. Critical making is very focused on the process of making the art/object itself than being focused on the final product. It is process-oriented, scholarship-oriented and the final prototypes can speak for themselves. 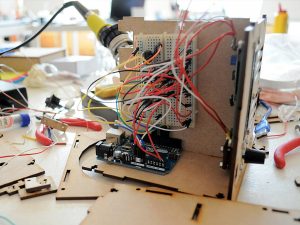 The issues with standard methods of technological design now often produce standards and systems that lack cultural richness, emotion, and human-oriented values. Principles like efficiency and productivity are overemphasised by the industry, and this causes and contributes to a overworking, overproducing and over-consuming consumer-oriented culture.

Critical Making counters this by giving designers and the public a chance to break out of this cycle, step back and reconsider and rethink a broader spectrum of human experience. It can also help to highlight and bring attention to people, perspective and practices that are forgotten in conventional product development workflows, and consider what it means to be human. Critical making can help reintroduce criticality back into the post-2010 maker culture, so that it can un-sanitize, un-smooth and re-politise. At the same time, Critical Making can make actionable design strategies accessible to the public, interaction design community and translatable to the practices of technology designers. The public can also be more informed by perspectives in philosophy of technology as the prototypes produced materially articulate particular stances and ideas. They can operate as a type of boundary negotiating artefact or boundary object. All these helps increase public legibility. Moreover, materials speculations can mediate exchanges among scholars of different fields. Critically engaged artworks can do a detailed breakdown of a topic, but critically made objects and appeal to audience’s emotions and can get the message across clearly if through fully implemented.

Attached below is a video of a booklet made critically from a workshop led by Garnet Hertz.

Attached is my slides for the research done for Researcher of the Week. 🙂

DN1010 Researcher of the Week