For my research, I have mainly decided to send out a survey to better understand the general consensus of Singaporean’s mindset towards recycling and the motivations behind their decision to recycle. Hence, I create questions that will allow me to understand

Below are the questions from the survey that was sent out. 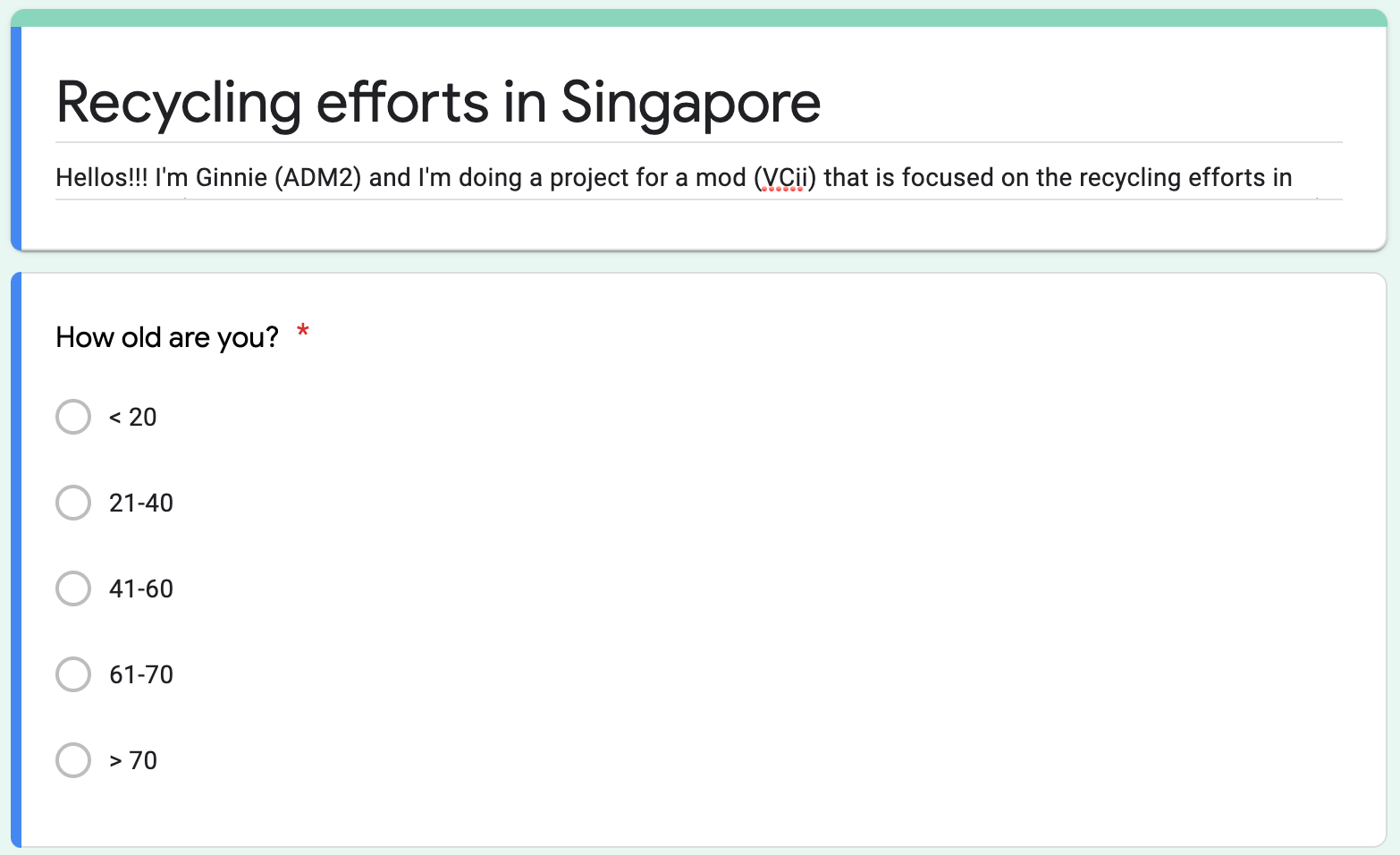 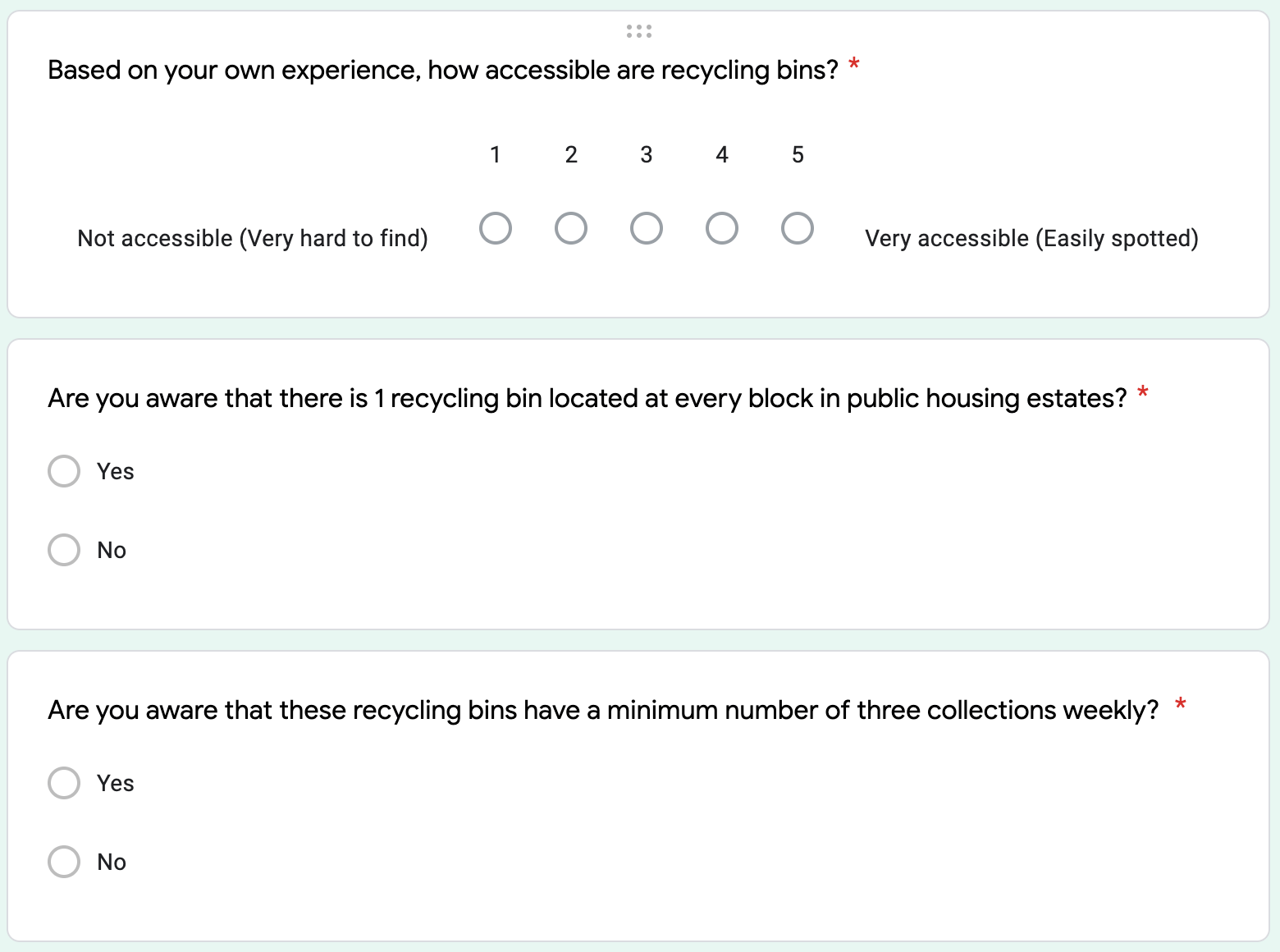 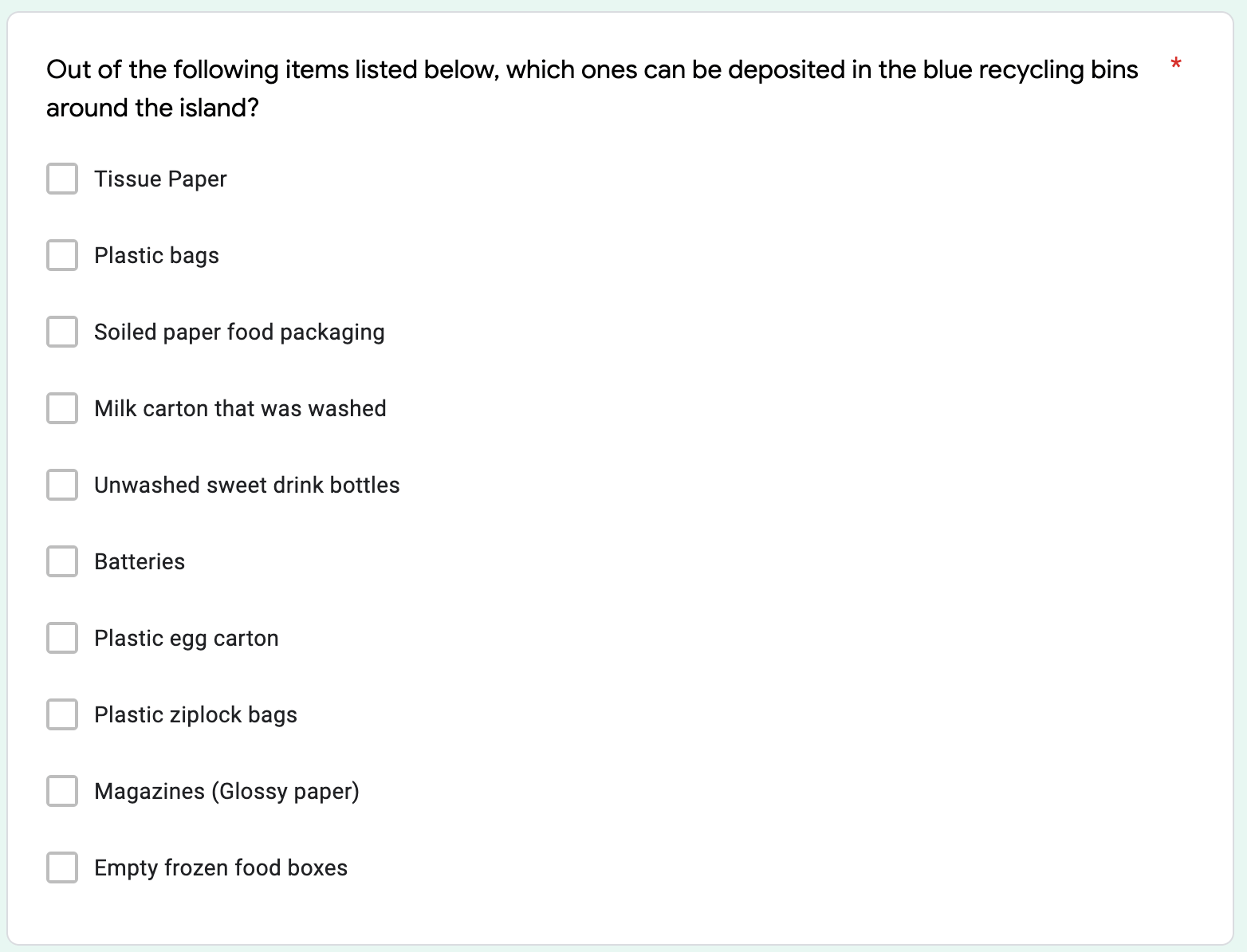 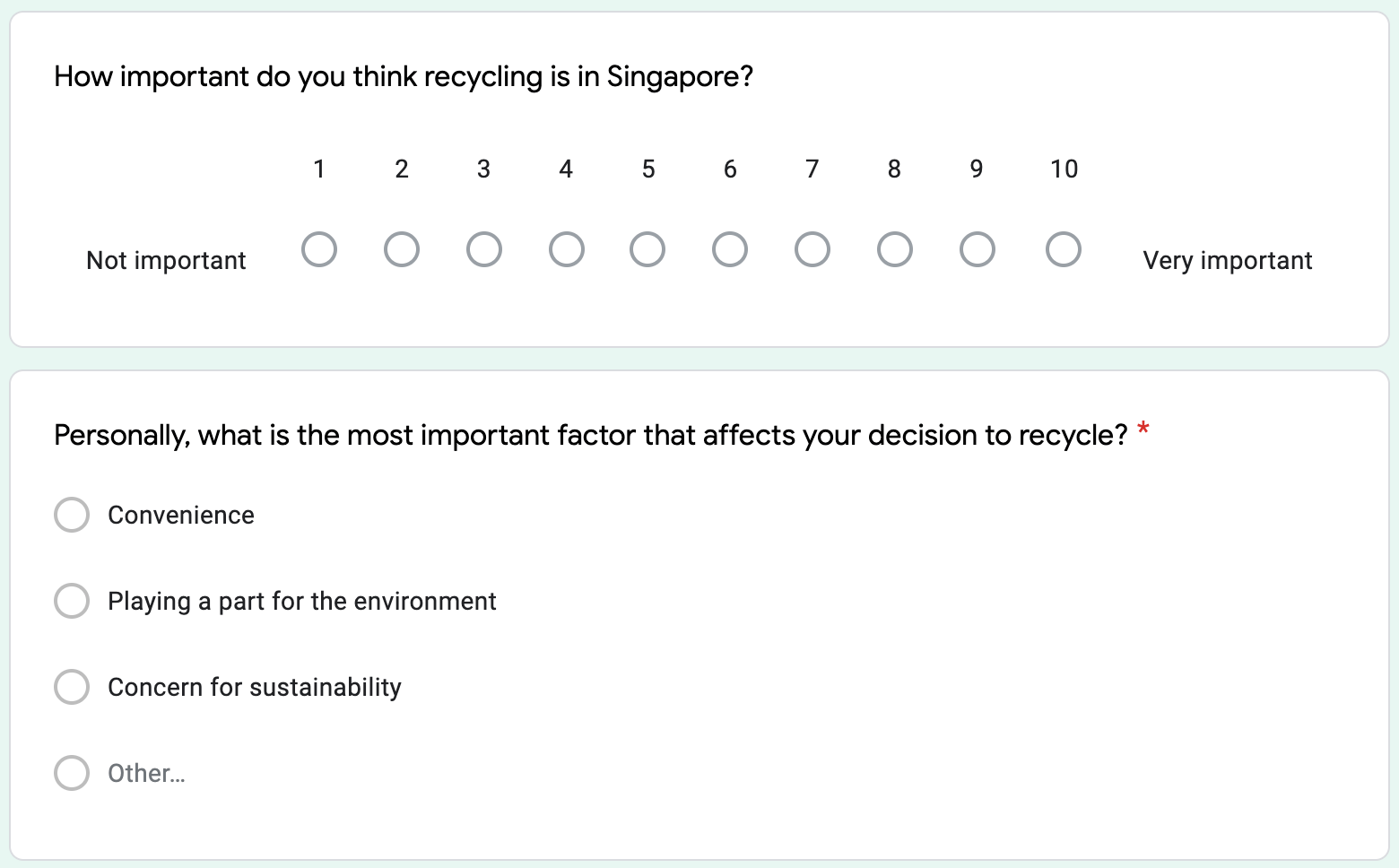 As the sample size is very small as compared to the whole actual number of Singaporeans, I am aware of the restrictions in the responses recorded. I have also tried to compare the responses to what I feel and also with opinions and research found online.

Attached below are the responses recorded.

From the responses, I have decided to 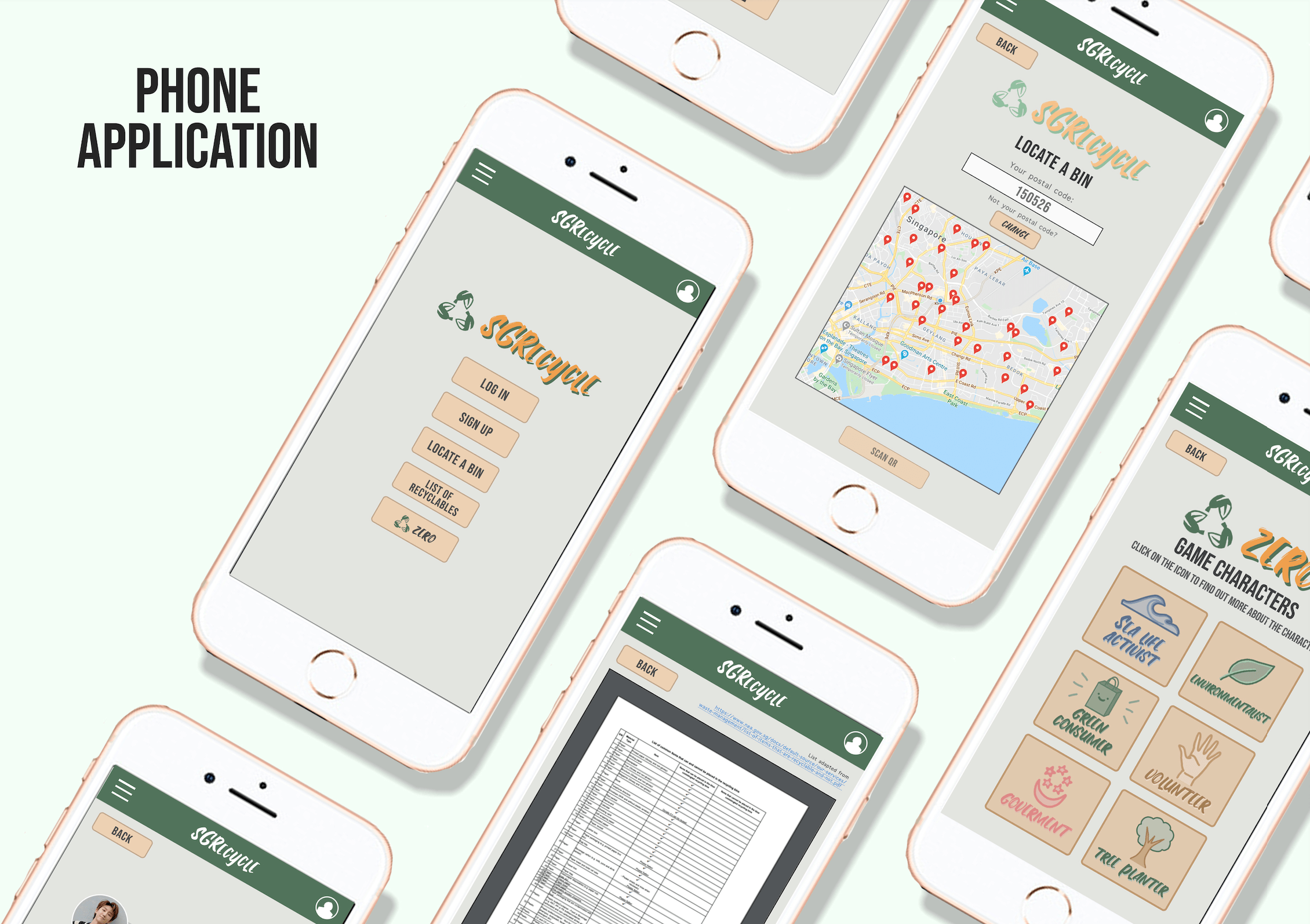 This phone application aims to mainly

Attached below are the interactive, pdf, jpg and online grid view versions of the application designs.

Click here for the interactive version of the app.

Click here for the jpg version of the designs.

Click here for the pdf version of the designs.

Click here for the online grid view version of the designs. 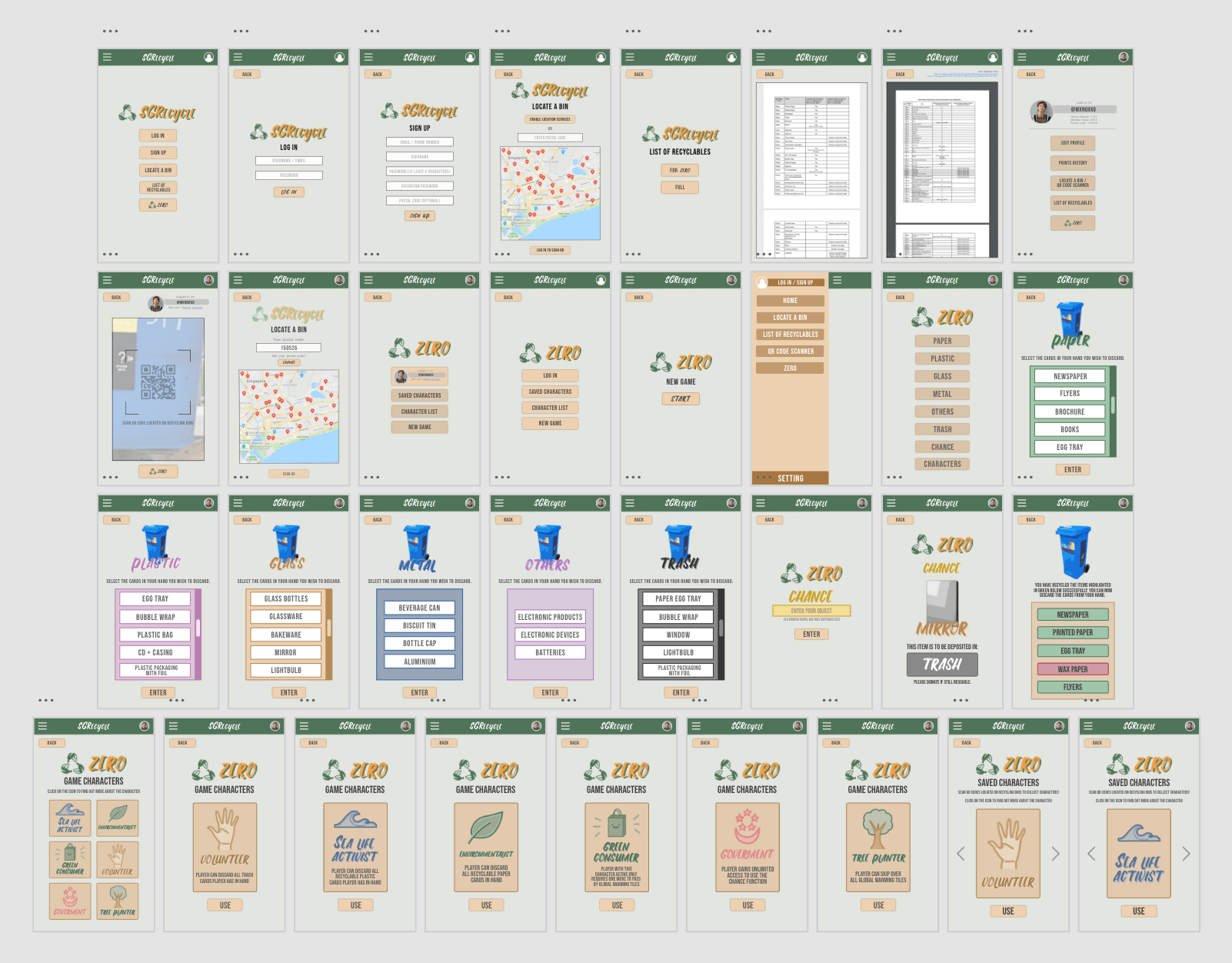 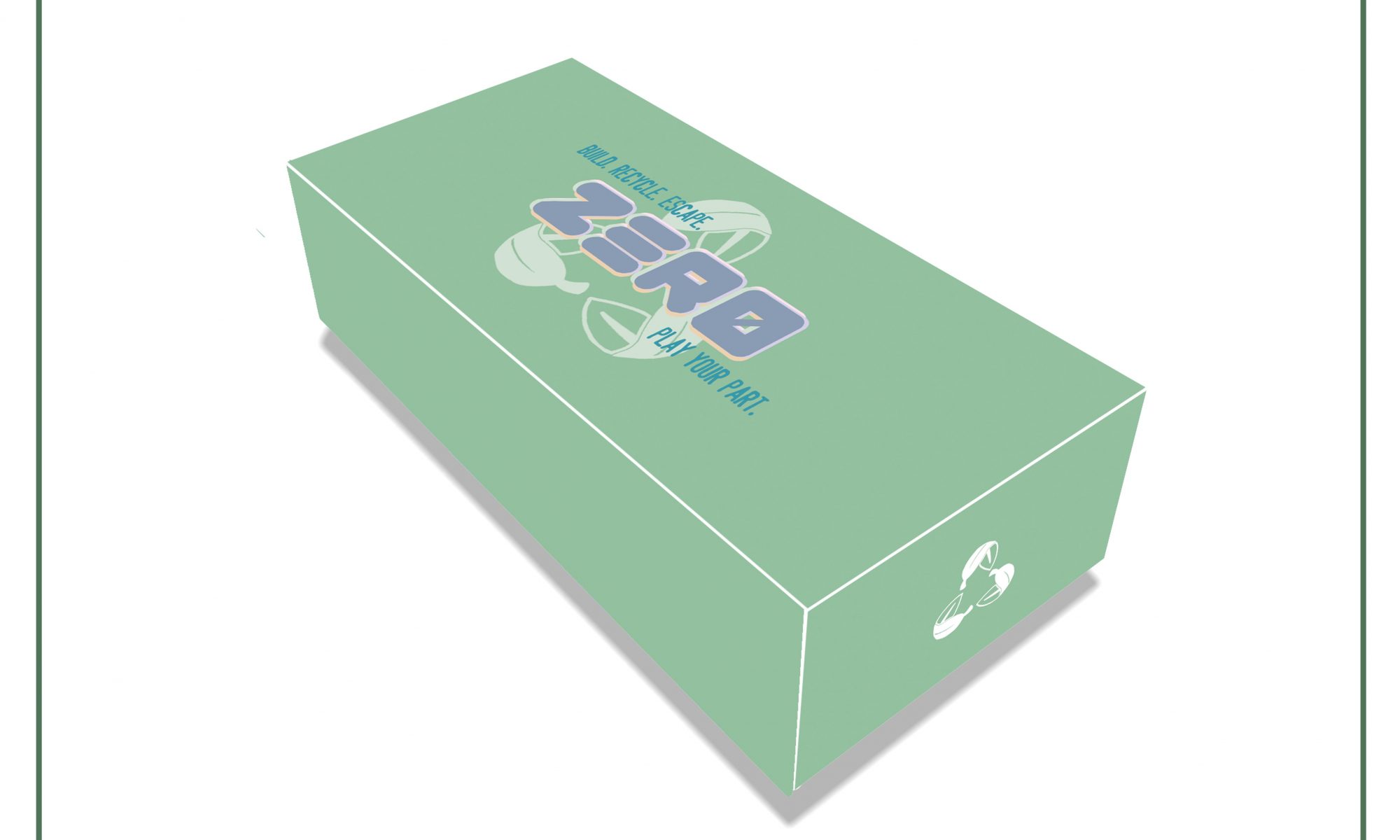 DELIVERABLE ONE: Board Game – ZERO 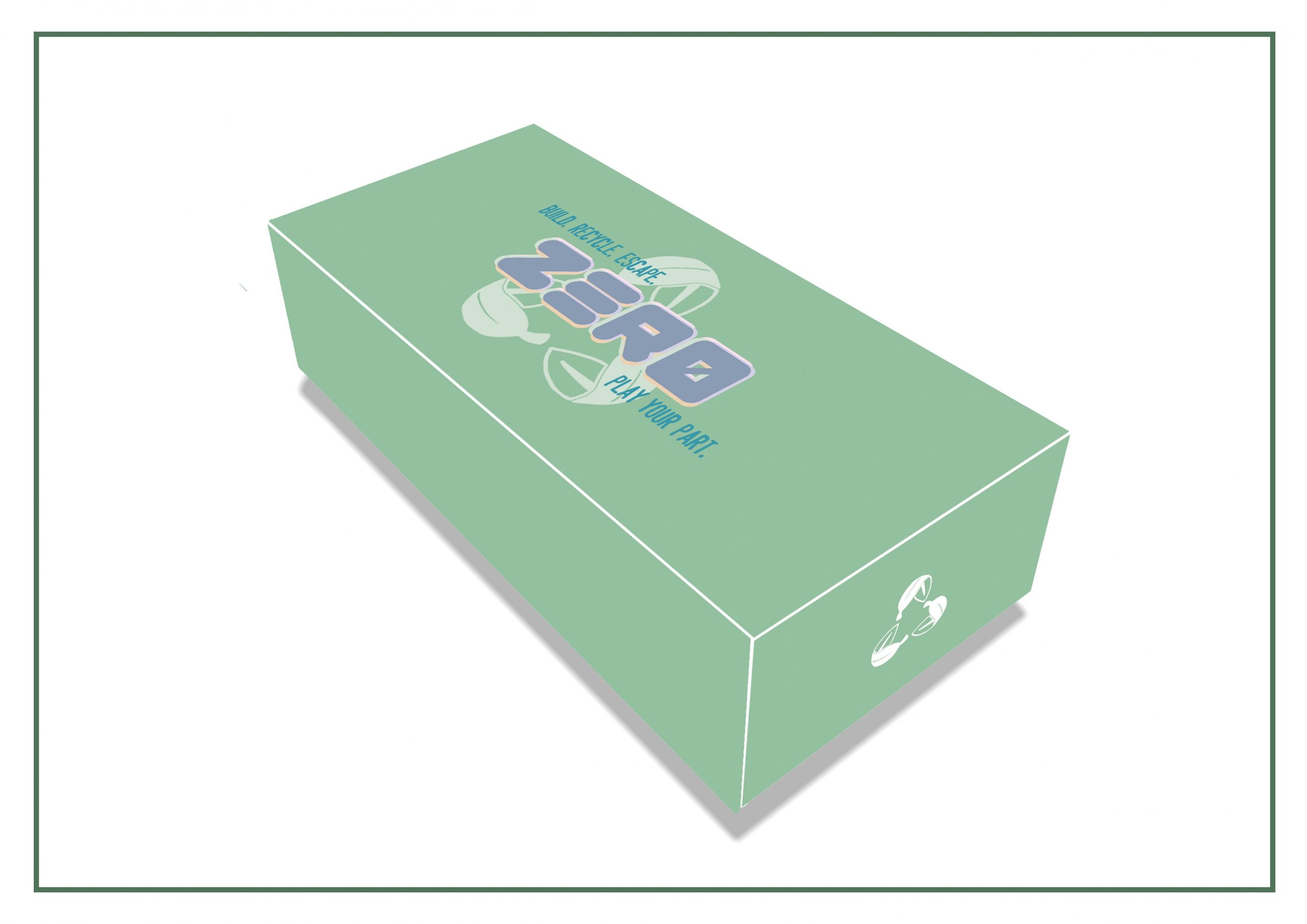 ZERO is a board game that was created to allow the general public to learn how to properly recycle through gameplay. The game aims to allow player to understand what can be recycled and what needs to be deposited in the trash bin instead of the recycling bin. This game also tackles a problem faced by Singaporeans when recycling – where they are unsure how to categorise recyclables and hence end up throwing them instead. 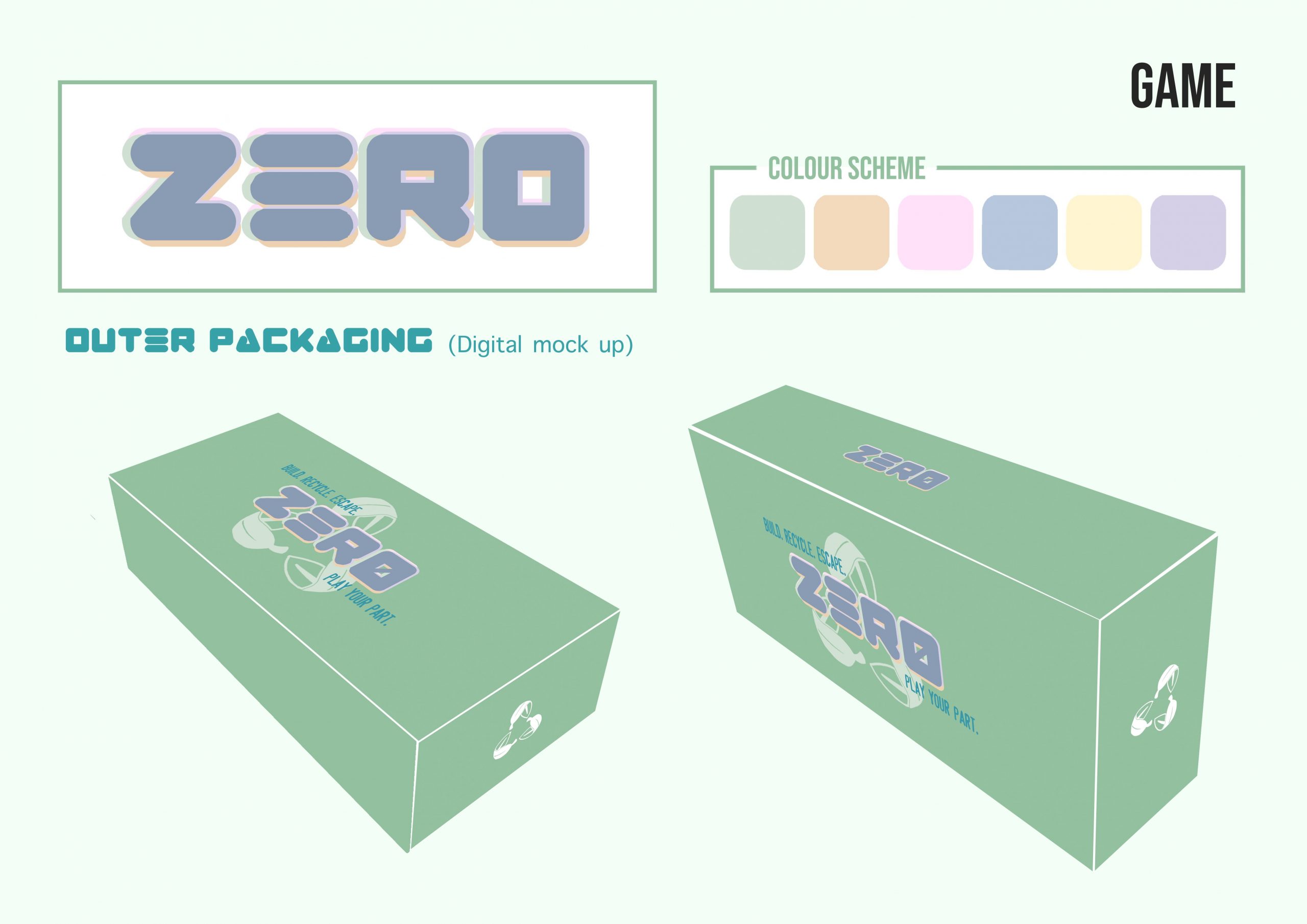 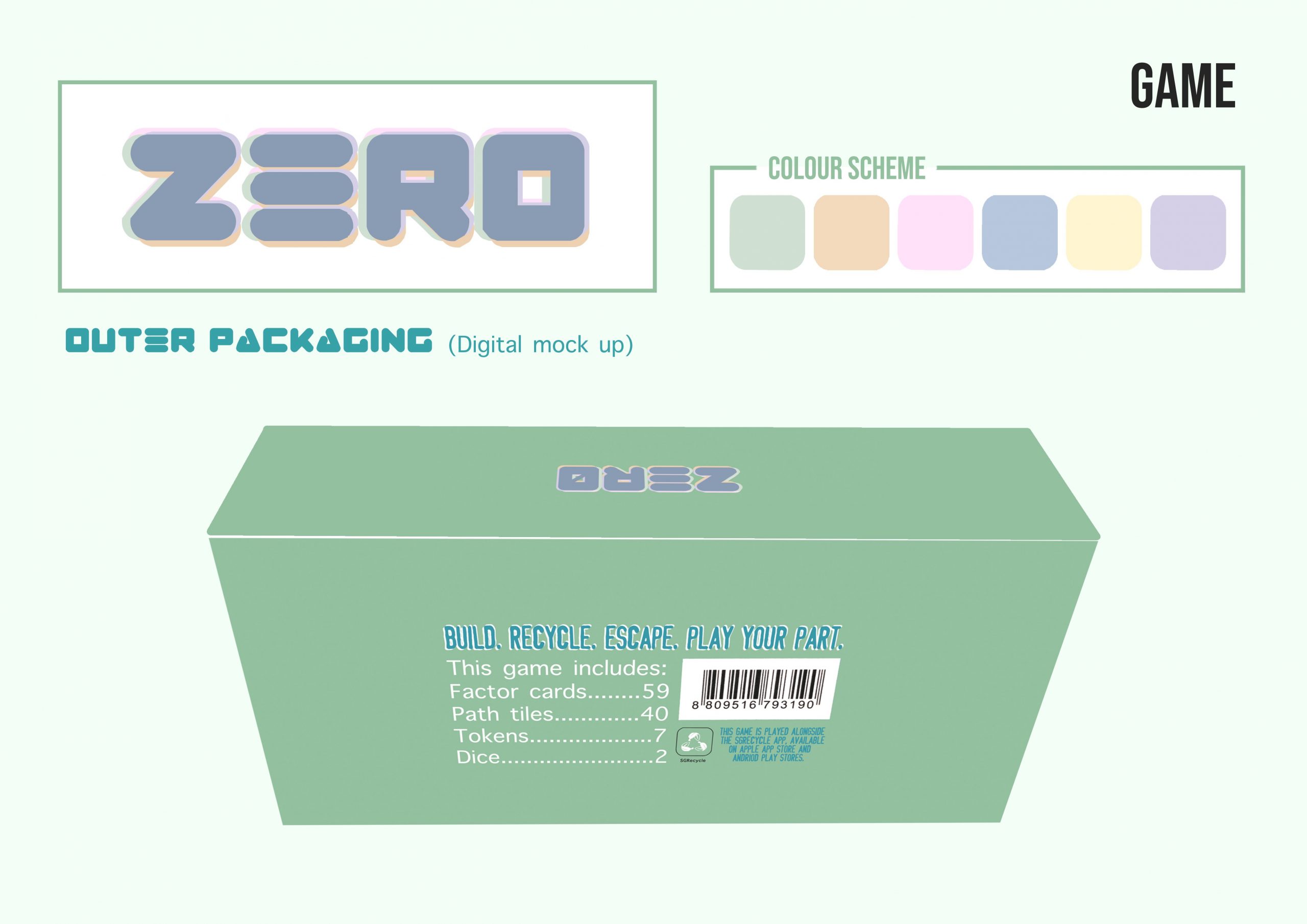 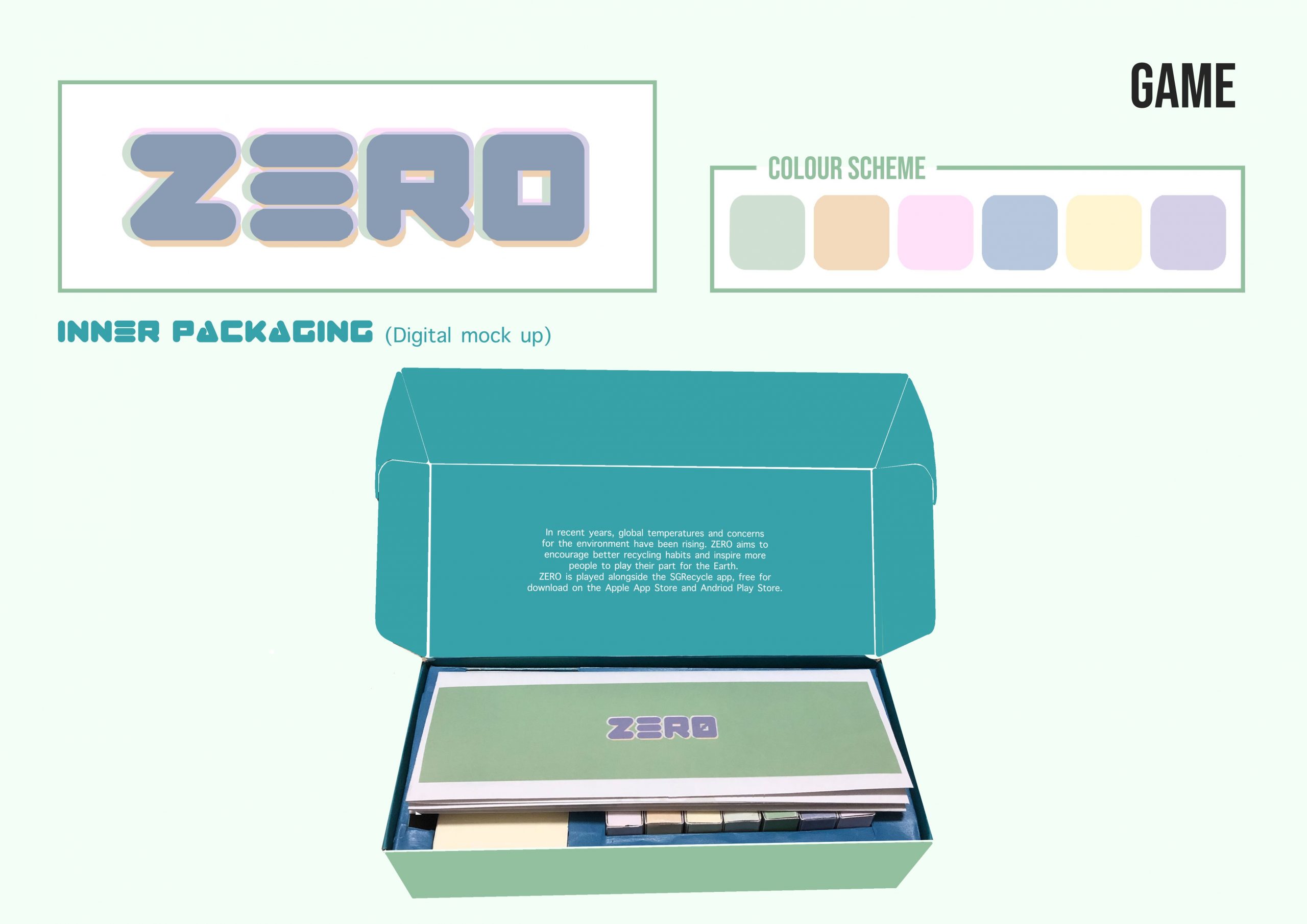 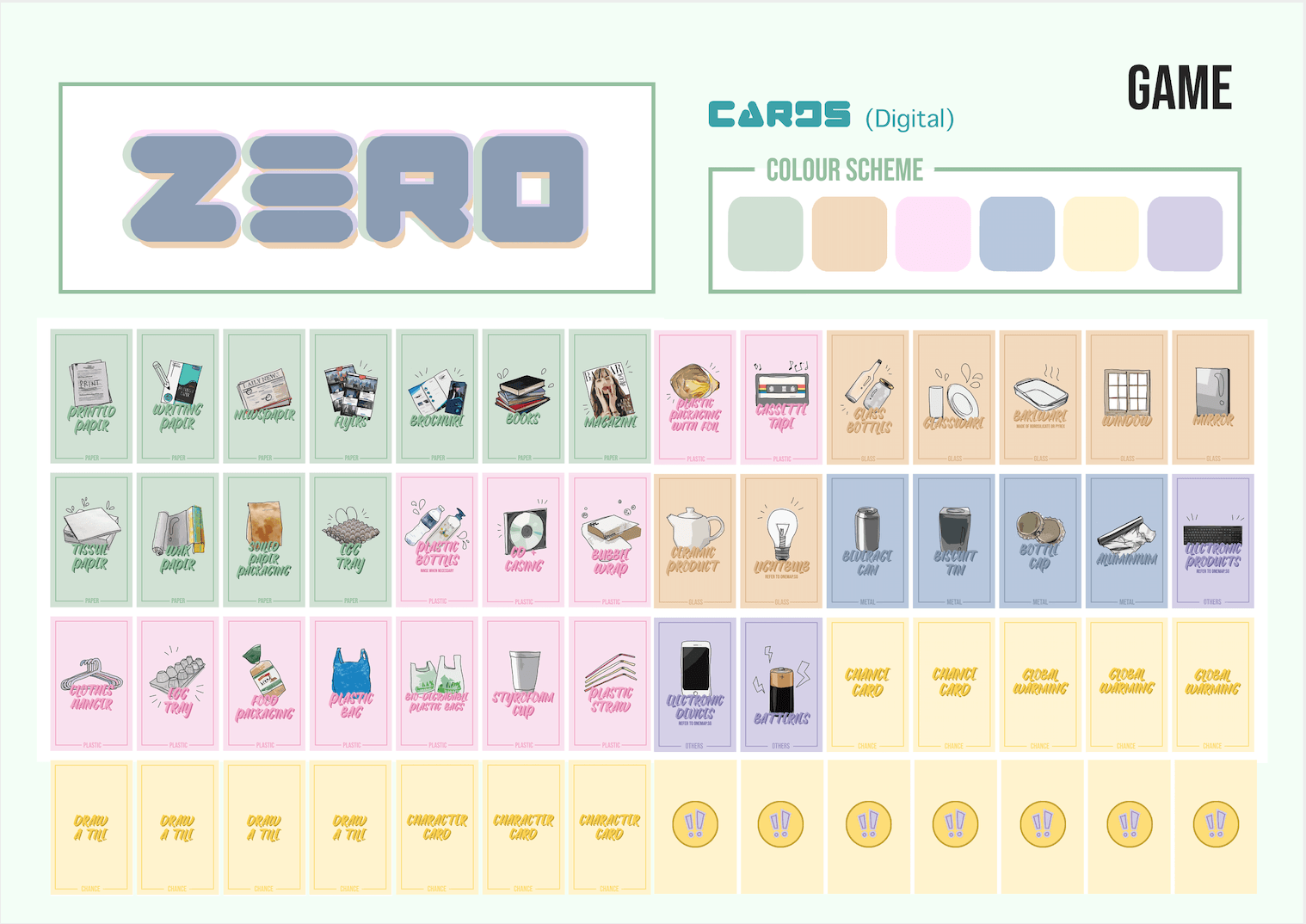 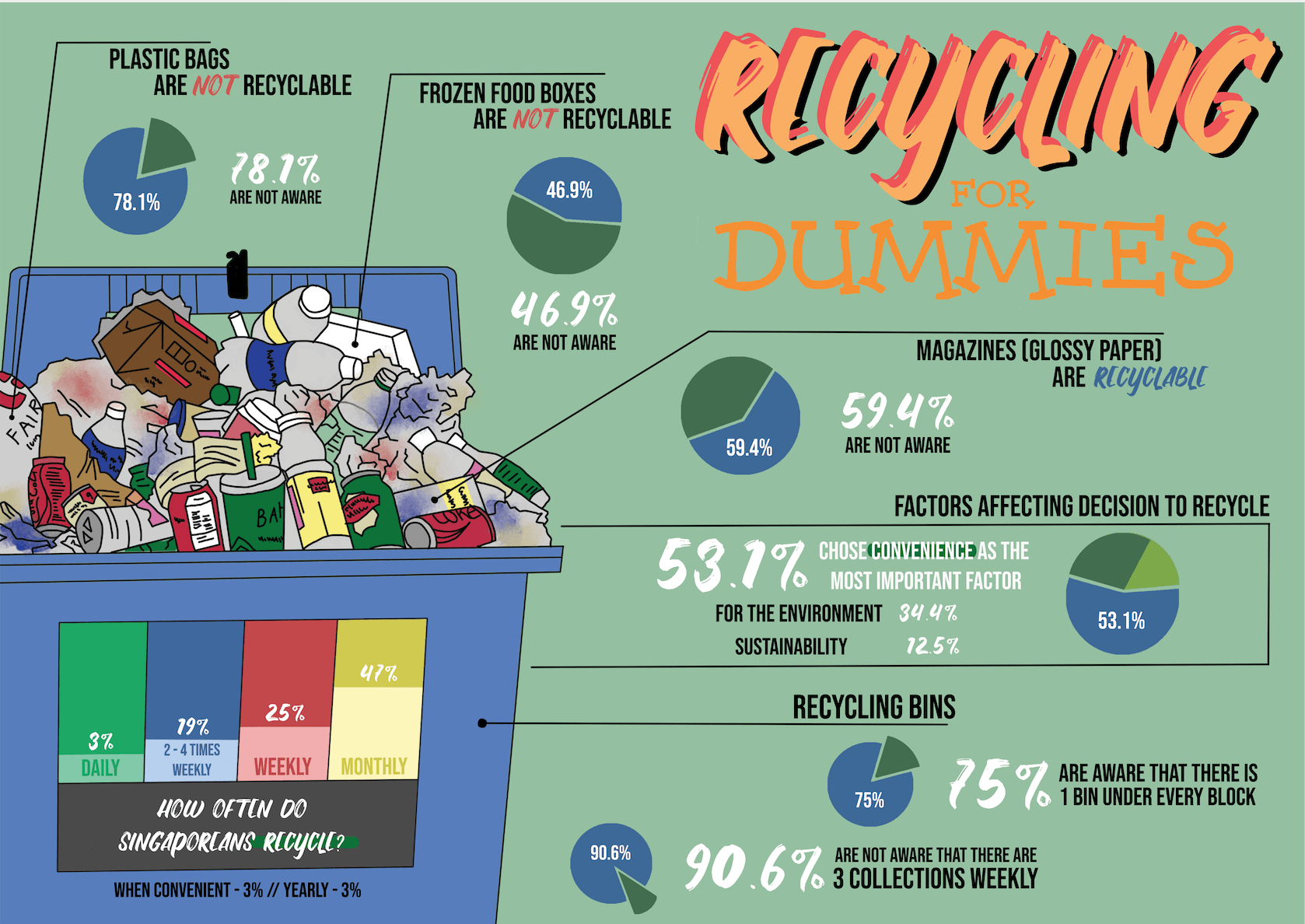 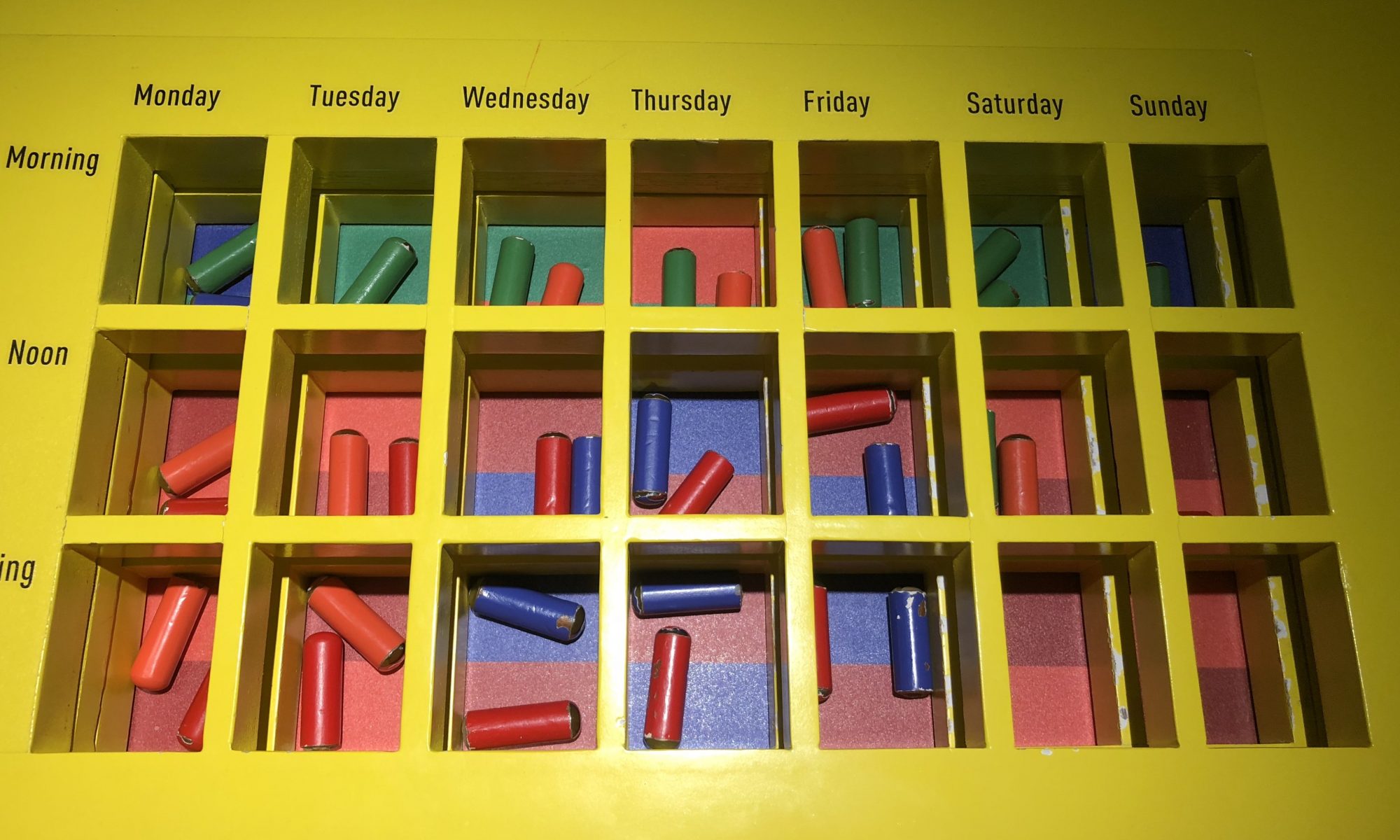 Briefly share your experience going through Dialogue with Time. What were some of the feelings, thoughts, challenges and insights gained while role playing an elderly person? (150 Words)

While going through the Dialogue with Time exhibit, we got to see through a window of what it is like to live the life of an elderly. The experience started with allowing us to think of our life journey and how we would like to experience life when we grow old. That allowed me to effectively put myself in the elderly’s shoes as we were induced to think about the elderly from on own point of view. The yellow room was my favourite part as we could physically experience what difficulties the elderly may experience on a day to day basis. I tried the mobility station first that required us to tie 2kg weights to our ankles and walk up and down the stairs. When I first put on the weights I was immediately surprised by how much harder it was to walk with it. Thereafter, while trying out the other stations such as the medication station and the listening station, I was again made aware that I had underestimated and undermined the extent of such day to day difficulties experienced by the elderly, allowing me to better understand how it is like for the elderly.

Drawing on your experience, can you think and list some of the benefits inherent in the design research technique of role playing? (150 Words)

In Dialogue with Time, the yellow and pink room encouraged role playing. In the yellow room, participants actively experience the simulation of the physical difficulties the elderly experience, and in the pink room after experiencing the yellow room, we get to listen to the difficulties we’ve just experienced. This has allowed me to better put myself in their shoes and better relate to their problems, in turn better understand their problems as accurately as possible. Hence, the design research technique of role playing aids in:

Can you think of some contexts where role-playing can be useful to help discover and define design challenges or contribute to the development of design solutions? (150 Words)

While people can be empathetic towards others, it is always hard to completely or correctly understand another person if one has not personally been in the same / a similar situation. It is always hard to understand someone else, but I think role-playing allows designers to much better grasp the concepts of the problem and tailor the most suitable solution to the problem in the design process. For example, if designer who is not pregnant or hasn’t been pregnant wishes to design solutions to aid pregnant mothers during their term or to raise more awareness for the problems they face, it would be difficult for the designers to design a solution that will accurately address the problem. With the help of role play, designers have the chance to experience the very problems that pregnant mothers face and hence be able to design more specific and directed solutions to tackle the root of the problem.

Task 1A: Exploratory Research – Exploring the What, Why, Who, and How

Food is a key aspect in a human’s survival and food security plays a big part in ensuring that there is food available and accessible to individuals. While the issues of poverty, accessibility and climate change has always been a few of the factors affecting food security, as time passes, we start to face more issues such as the issues with food exports and the issues caused with worsening and more unpredictable climate changes.

Climate change has always been a concern to the world and even though efforts are being made to slow down the pending destruction that the Earth is heading towards, such efforts are not being translated into effective results and issues with rising temperatures, rising sea levels and the increase in natural disasters has been on a rise. While global warming may not directly affect on generation, our future generations will have to face dire consequences if we do not take action now.

Mental health is an issue that many individuals have been grappling with, but yet the world still does not pay much attention to the importance of mental health, causing the undermining of how mental health can affect an individual. Although the awareness towards mental health has been increasing, many still shun the issues revolving around mental health and there are also many stereotypes that exist due to our lack of understanding towards these invisible disabilities.

Social media usage is currently a large and vital part of many individual’s daily lives, especially the youths. While social media has its advantages, there are also many repercussions that came with the increasing usage of social media. Such repercussions have in turn caused many deeper issues such as mental health issues and self esteem issues.

Out of the above 4 issues, I am most concerned about climate change / global warming as it is one of the most pressing issues in the world now, with sustainability and concern for the future generations also in the picture. Hence, I would like to explore deeper into climate change.

The issue I would like to focus on is Climate Change.

With the recent Australian bushfires wiping out many wildlife habitats and posing a danger to humans and infrastructure, the concern for climate change and global warming are now on a rise again, and issues regarding the environment are now in the spotlight of concern once again. Global warming has caused glaciers to shrink, ice on rivers and lakes breaking up earlier, plant and animal ranges shifting and trees flowering sooner. Such changes against nature proof to be a threat to the environment as sea levels rise and temperatures rise.

The Intergovernmental Panel on Climate Change (IPCC), which includes more than 1,300 scientists from the United States and other countries, forecasts a temperature rise of 2.5 to 10 degrees Fahrenheit over the next century. It is predicted that by 2100, sea levels will rise 1 – 4 feet. This not only will cause natural habitats to shift, cities that lie nearer to the sea level may also face beng submerged as time passes. Not only that, issues such as food security and sustainability may also start posing as an issue that may endanger life on Earth.

These changes to nature may ultimately threaten the human kind’s survival on Earth and with Earth being the only planet that can sustain life, the topic of extinction of life may just be possible  in the near future.

As climate change is an issue that affects everyone, everyone has a part to play in the efforts to ensure sustainability and to protect our only homeland. However, global warming is a long term problem and poses as a long-term threat, possibly endangering the lives of our future generations. Hence, I would like to choose youths (generally around ages 15 – 30) as a target audience as youths are one of the groups with the highest consumption (and hence the groups with the highest waste disposal) and are also the most probable to experience the negative effects first hand.

Another important group of people I also would like to address are consumers. Consumerism produces waste to be disposed and encourages wastage and does not contribute to efforts in slowing down the rate of climate change.

I aim to raise awareness and also help youths and consumers alike recognise the threats we are now facing as well as threats we will face in the near future, and also help consumers to more effectively dispose of trash by recycling or reusing. By raising awareness, I hope consumers and youths are more inclined to play a bigger part for the Earth.

Choice of Media: Digital app (for a mixed reality experience)

Unmoored explores a potential future of melting ice caps and rising oceans filling Times Square. Developed in collaboration with Microsoft, Unmoored allows guests to explore a submerged Times Square in mixed reality, to use their mobile phones to access an augmented reality experience.

I think this was an effective way of raising awareness of climate change as users get to experience a mixed reality experience and is engaged in the entire experience as he/ she walks down the streets of Times Square. The eye-catching visuals in the application was also appropriate for users to experience our future if action is not taken now.

Dear Climate is an art project that was conceived as “a new way to talk about the weather.” The project is a collection of posters and sound collages that take on climate change with a more personal and conversational tone. As these tones target more personal emotions within humans, it allows us to more deeply connect with ourselves and relate better to the issue that was being brought up. The posters were only in black and white, and its’ colour choice reflected the occasion. The message brought across by the campaign/ works are also very precise and clear, allowing viewers to understand what the artists were trying to convey across.

This campaign was viral when it was ongoing and it gained a lot of attention due to the special qualities of it. Whenever a user pulls out a piece of (green) tissue, the tissue level in the tissue box falls, revealing an empty outline of a country. The more tissues the user takes, the faster the country on the tissue box turns from green to black.

I think this is a very effective way of increasing awareness and also very effective in conveying the message across with fun, hands-on elements. The user sees the effect of his/ her actions (the action of pulling out the tissue paper), directly resulting in a consequence (in this case, a green country slowly turning to black because the level of green tissues keep falling as longs you take tissue from it. It was also very engaging for the users because the users are able to be involved in the installation and first hand “cause” the destruction of nature.