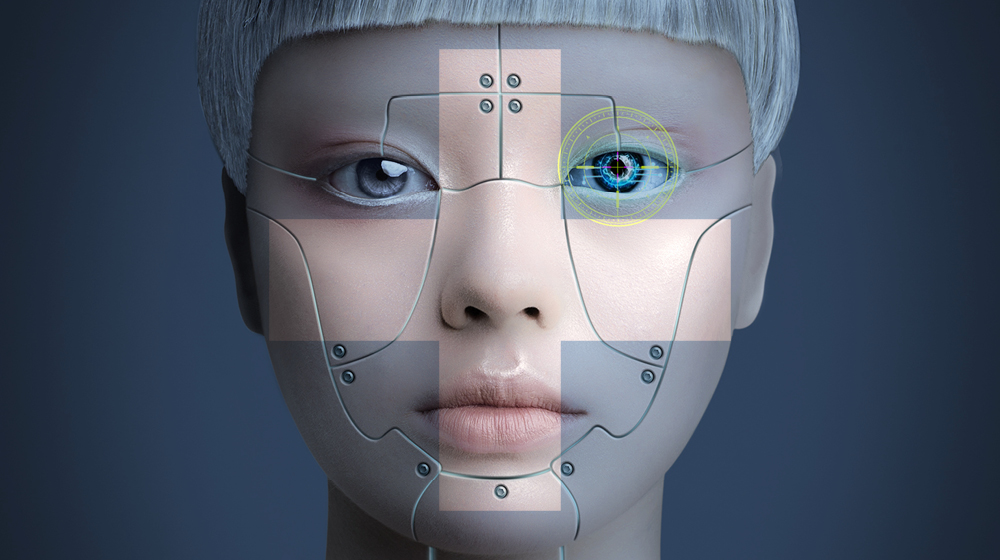 The trip to ArtScience musuem was really enlightening in helping me realize the rapid development in technology today – it is almost like the realization of Sci-fi movies and games. The devices/artworks were really awesome – they ranged from beneficial – impacting people’s lives via prosthetic arms, to quirky – the wearable skin suit, and even disturbing – the dolls made out of living cells. It also posed many ethical dilemmas in science, being very thought-provoking – how far is too far? While this might be an advancement, seemingly the bright future, it can also be a dystopian outlook for our society if we take this too far. Ethical concerns aside, in which I will be touching upon later, I was still very impressed by how much we can push the boundaries, and how there are just so many possibilities in technology – it gave me further thought that within our course Interactive Devices, there is much to explore, much room to break grounds – thus resulting in the innovative potentially life-changing works in the exhibition.

Changing our environment – Integration of the synthetic and natural

The work I will be addressing on is the Beamer Bees by Anab Jain, in which he attempted to create synthetic animals and seamlessly integrate them into the ecosystem. This is inspired by the destruction of many bee colonies due to many combined factors, also known as colony collapse disorder. Bees are very important to the ecosystem, they pollinate flowers – source of our fruits and vegetables. Bees are said to be responsible for “one of three bites we eat”. They also create honey with is an important consumer product in our market. Therefore, the disappearance of bees are a problem. 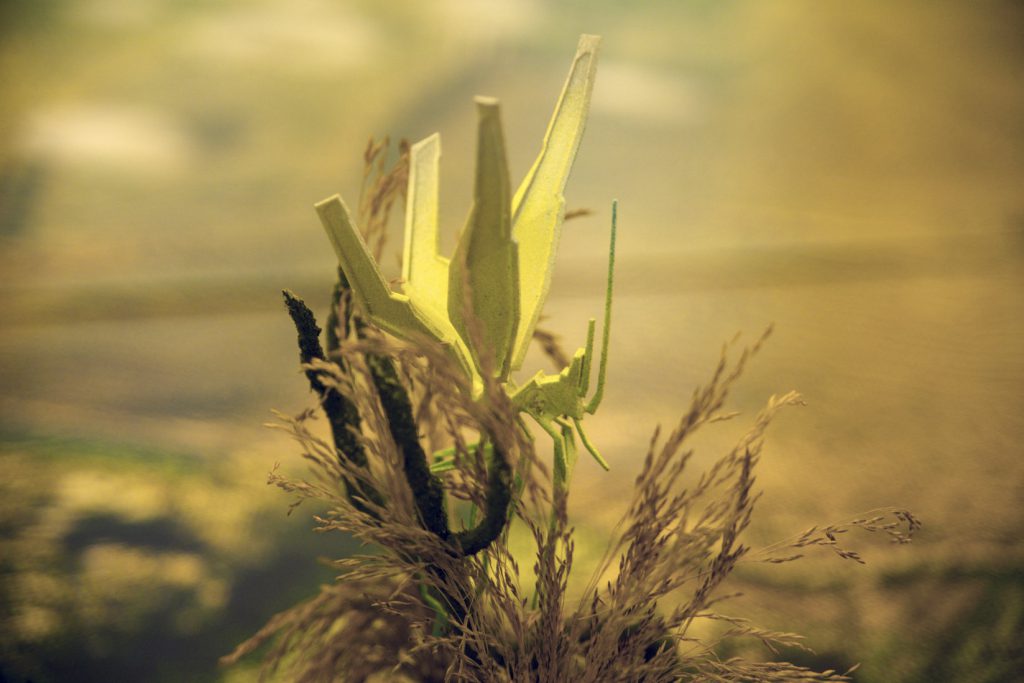 The making of the a synthetic pollinator that never perishes

Beamer Bees are hence bees re-designed, synthetic insects that will never perish – so that pollination will not be an issue. It uses various DNA qualities from animals that will benefit the creation of this artificial species – e.g. pigment cells from colorful fish, wing fibres from birds and wave sensing plasmids from bats. After genetic modification, the bee embryos are created – resulting in its creation. 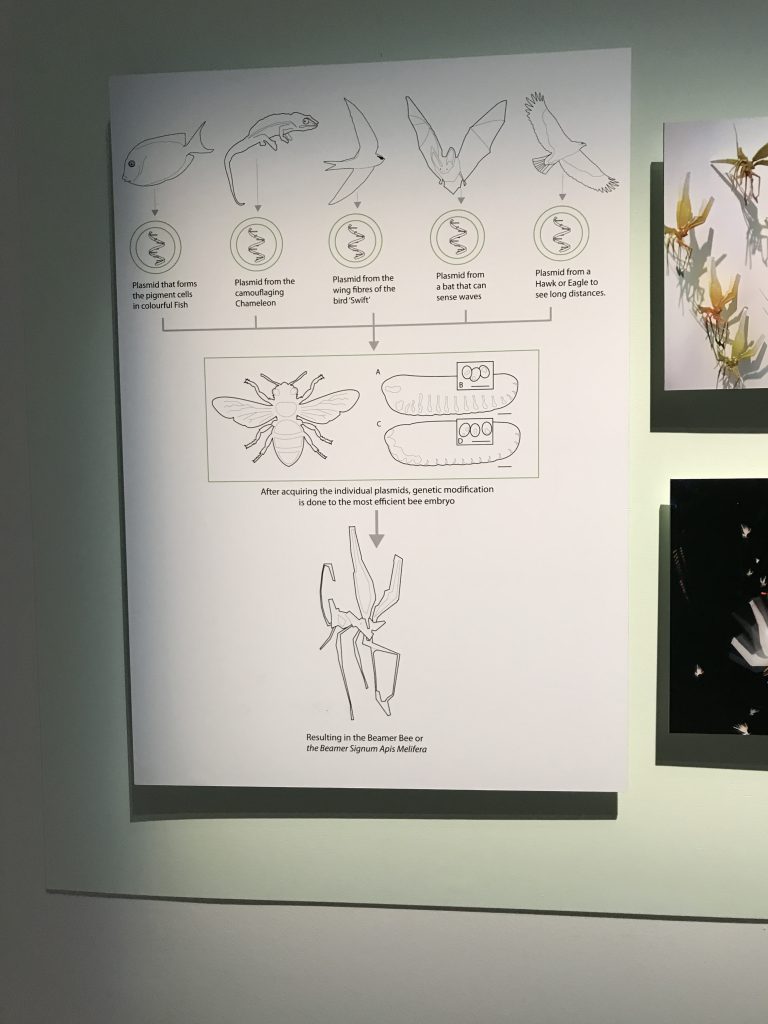 Process of the making of Beamer bees

Here’s the process video on how they made the bees.

Bees in the works

In a fictional Acres Green, the bees are imagined to be living harmoniously with the residents and ecosystem there. 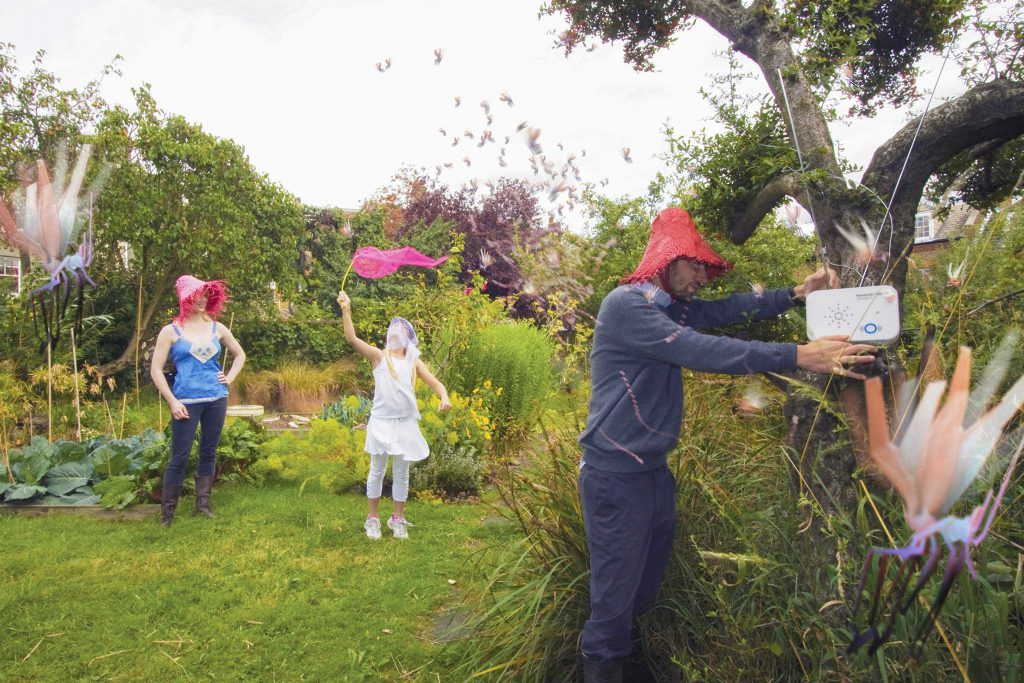 I thought this work was indeed a huge step from our natural system, showing the possibilities of integrating artificial with the natural, eventually perhaps even the creation of an entirely artificial ecosystem. Beamer Bees project is beneficial to wanting to make the world a greener and self-sustaining place, amidst the environmental downfall. If this project is widely successful, we can start creating more species that are essential to nature and human needs e.g. silkworms.

I do find it interesting and slightly ironic, that such methods are attempts by humans to salvage the damage that we have done to the environment, because through technology it has also brought the means to its destruction. The artificial has killed much of mother nature and thus the artificial is used to build it back up. Once again, how far is too far? The future of our ecosystems could be an optimistic turn towards a greener, self-sustaining area. However, there might be a possibilities that our attempts to manipulate the environment might worsen it even more – bringing us closer to downfall. This could be a potentially dangerous bio-weapon if fallen into the wrong hands. Will we be able to do these with humans next time? If we are able to create organisms will ideal qualities and don’t perish, perhaps we can even produce super-humans that don’t perish – seeing that genetically modified babies are already in the making.

All in all, Beamer Bees is a fantastic push in technological field and it definitely has great intentions. It also makes me think of the potential future of our environments – which can be both good and bad depending on its control.