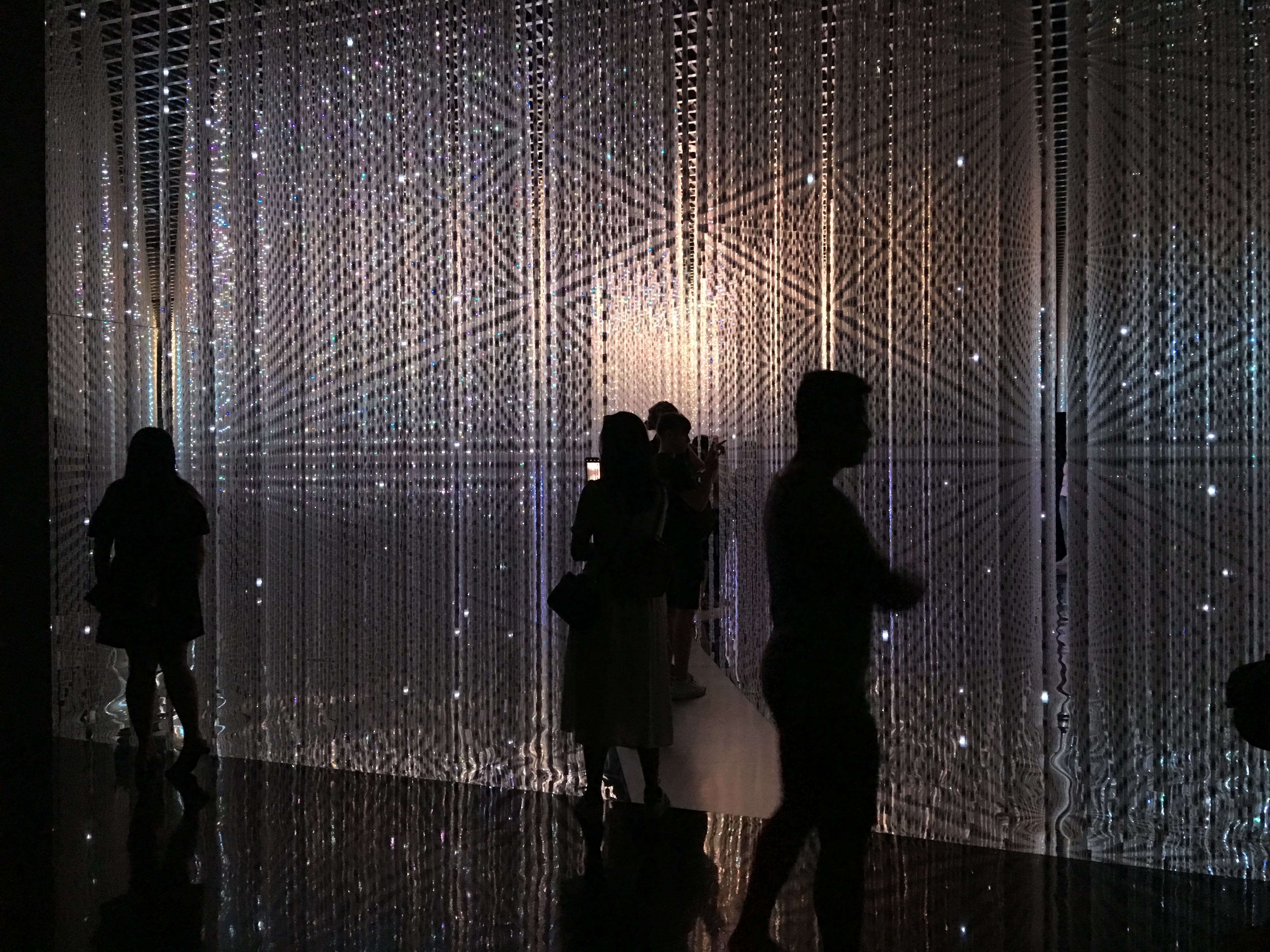 Future World is an exhibition that explores the relationship between art and science through immersive, interactive projects suitable for all ages. It allows people to have fun and play, but also probes an individual’s relationship with people, mother nature, and the universe. It has five themes – Nature, Town, Sanctuary, Park and Space – whereby these spaces are often transforming and different based on the interaction by guests.

TeamLab is a collective of people with highly various backgrounds ranging from art, programming, engineering to architects, where they unite to define artistic expression in the digital world, merging both art and science respectively. TeamLab is often interested in works that challenges the boundaries of the viewer and the space surrounding them. For example, their latest exhibition in Tokyo, Planets, is headlined “become bodily immersed in a massive art space with others”, allowing visitors have the ability to influence the work through their interaction and immersion, blurring the boundary between themselves and the artwork.

In Future World, teamLab uses a range of interactive technologies to construct the immersive installations – ranging from projection, motion sensors, lights and participation from the users.

Immersive installations in Future World often allows users to participate in them and influence the artwork. In the Nature room, through the usage of motion detectors, the waterfall projection on the floor will bend around the viewer. Also, the walls have butterflies on them where people can hover their hand over the butterflies, as if touching them, and they “die”. Interactive element can be subtle, like the subtle water bending effect around the viewer, or deliberate where the viewer has to perform an action to see an desired outcome. Both combined together, creates an immersive space where the viewer has an influence in the space they are in and hence makes it highly engaging. 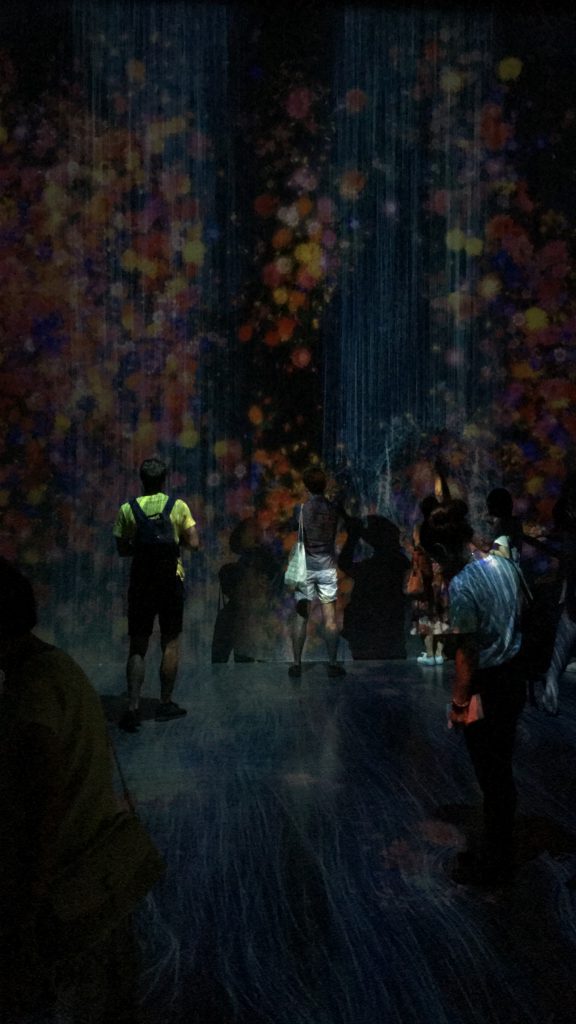 Apart from the participation aspect in the installation, the space design of the installation itself also contributes to creating an immersive environment. In the rooms like Nature exhibition, they often designed to seem boundless. The waterfall projection starts from wall and continues to the floor, till the end of the room. The surrounding walls have butterflies and forest elements, hence this makes the room feel like an actual nature space. This builds immersion as the artwork does not feel bounded to a canvas, but rather it surrounds and sometimes, almost engulfs the viewer.

Some works, like ‘Connecting! Block Town’ are highly reliant on participation, and does not rely so much on immersive space as compared to Nature exhibition and Crystal Universe where it is designed to seem boundless. 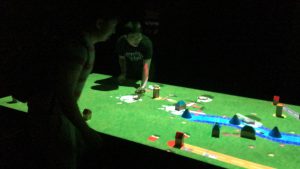 ‘Connecting! Block Town’ allows viewers to determine the position of the blocks, and the Kinect above will detect the shape/colour of the block and hence determine the placement of an element of the town e.g. train, house, road and river. In these works, the artwork is mostly “created” by the viewers, the tools are the blocks and it is up to them to design their own town, using the table as a canvas. Participation is encouraged in form of play, which also promotes immersion in the installation.

In both cases, the installations are successful in immersion. The similarities lie in how viewers have an impact to the artwork which encourages them to participate, some more playful (activities) and some more subtle (just by including the viewer into the space). How the space is designed for immersion is where the installations vary, dependent on the purpose of the artwork.

That being said, some works depend greatly on people interacting with them and when they are not being interacted upon, for example the Hop Scotch and the Slide, these works cannot display its full potential (nothing seems to really happen). Hence, this might be a flaw to interactive art when it depends heavily on user’s activity. As such, these works might not be as successful as others, where it still feels very much alive even without people interacting with it like Nature exhibition.

All in all, something that I felt really interesting in Future World upon visiting for the second time, was that the artworks are never fully similar at any point of time as it is dependent to the how viewers interact with these works at the particular time. This creates immersion beyond the individual, and probes further into how the individual relates to others in an environment.

Future World is an example of art work that teamLab produces. On the other hand, they done some commercial works like creating a Digital Light Canvas with ice skating rink. 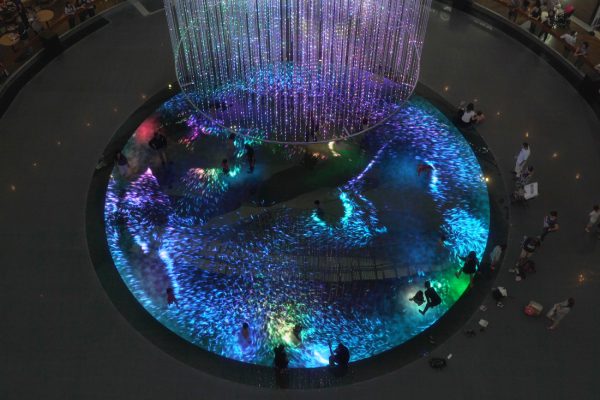 The distinction between art and commercial industry work is more blurred in relation to TeamLab’s works, because they merge both well together. Often they are able to create immersive, beautiful spaces whereby they also determine their own creative direction, plus they gain commercial success for doing so. Hence they are producing artwork unique to them, even in their commercial works. In today’s world, the boundaries between art and commercial industry work can be challenged, for example artists like Jeff Koons merges both together. Likewise, I would say that teamLab is able to do so too.