The Human + Exhibition explores the idea of enhancing human capability in a form of an augmented limbs. I find that the exhibition was a mind-boggling journey through all the ideas and artwork. 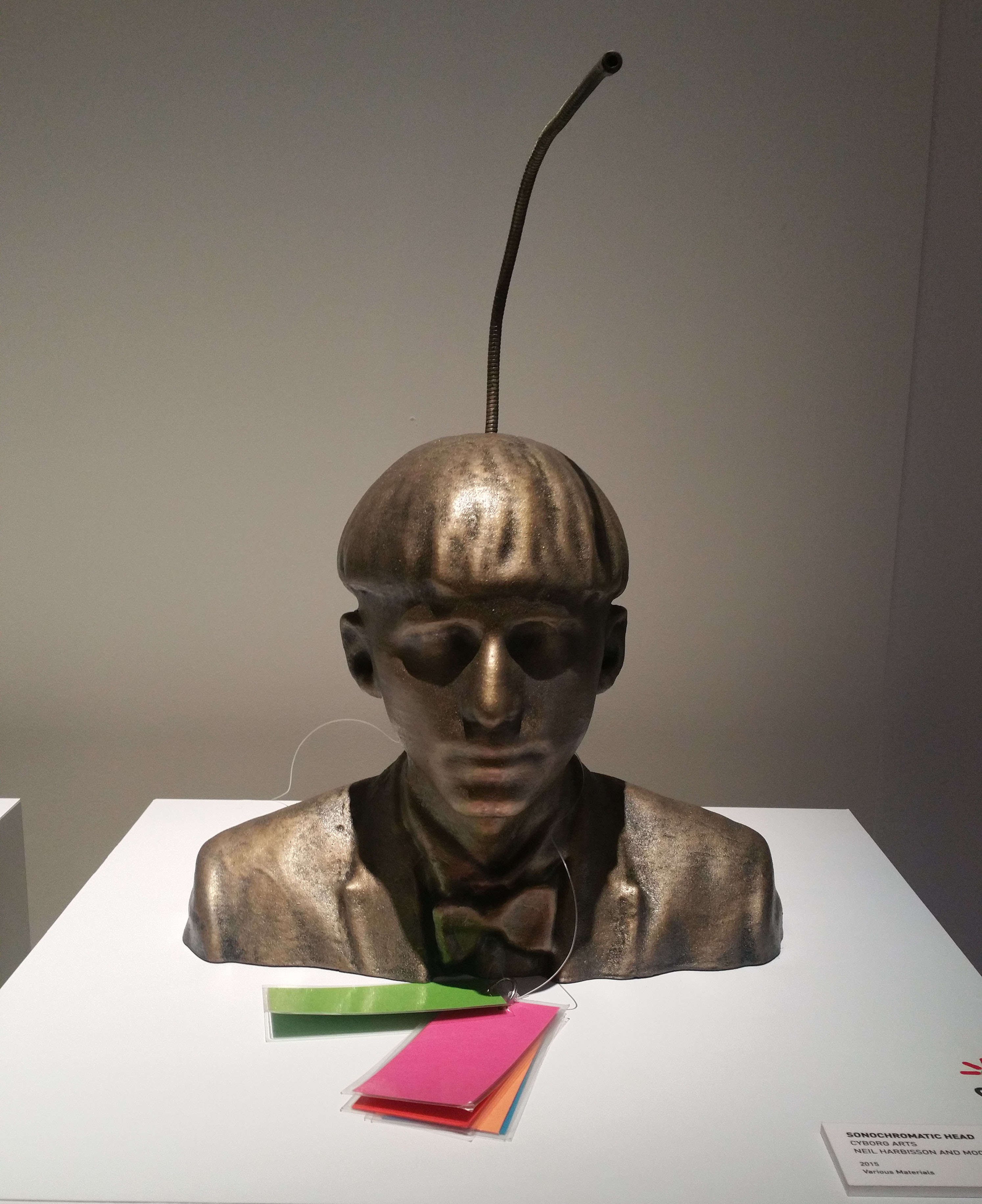 One of the weirdest augmented limbs that I find quite disturbing was the Sonochromatic Head by Neil Harbisson. The function of the tube at the top of the head act as a sensor that allows the user to listen to colors. The tube was surgically placed into parts of the brain that would allow such enhancement to happen. At first sight, I felt that it was a weird idea to be putting a “limb” on one’s head, but after hearing that Neil Harbisson was born with achromatopsia, rendering him unable to see color at all, it started to make senses. Each time a color come in front of the sensor, it would make a pitch, and the user could learn to recognize the pitch to identify the color. Neil was able to find joy in everyday lives through his “third eye”.

Augmented limbs such as Neil Harbisso’s Sonochromatic Head serves as a perfect example of how technology was able to help people with disadvantage and even function better than a normal human being. Neil Harbisso was able to detect infra-red and ultraviolet rays that would be potentially potent to humans. I believed that Human + had shown the possible utopia of mankind that human enhancement(cyborg)  would be the betterment of humanity. However, there would always be another side to the story. 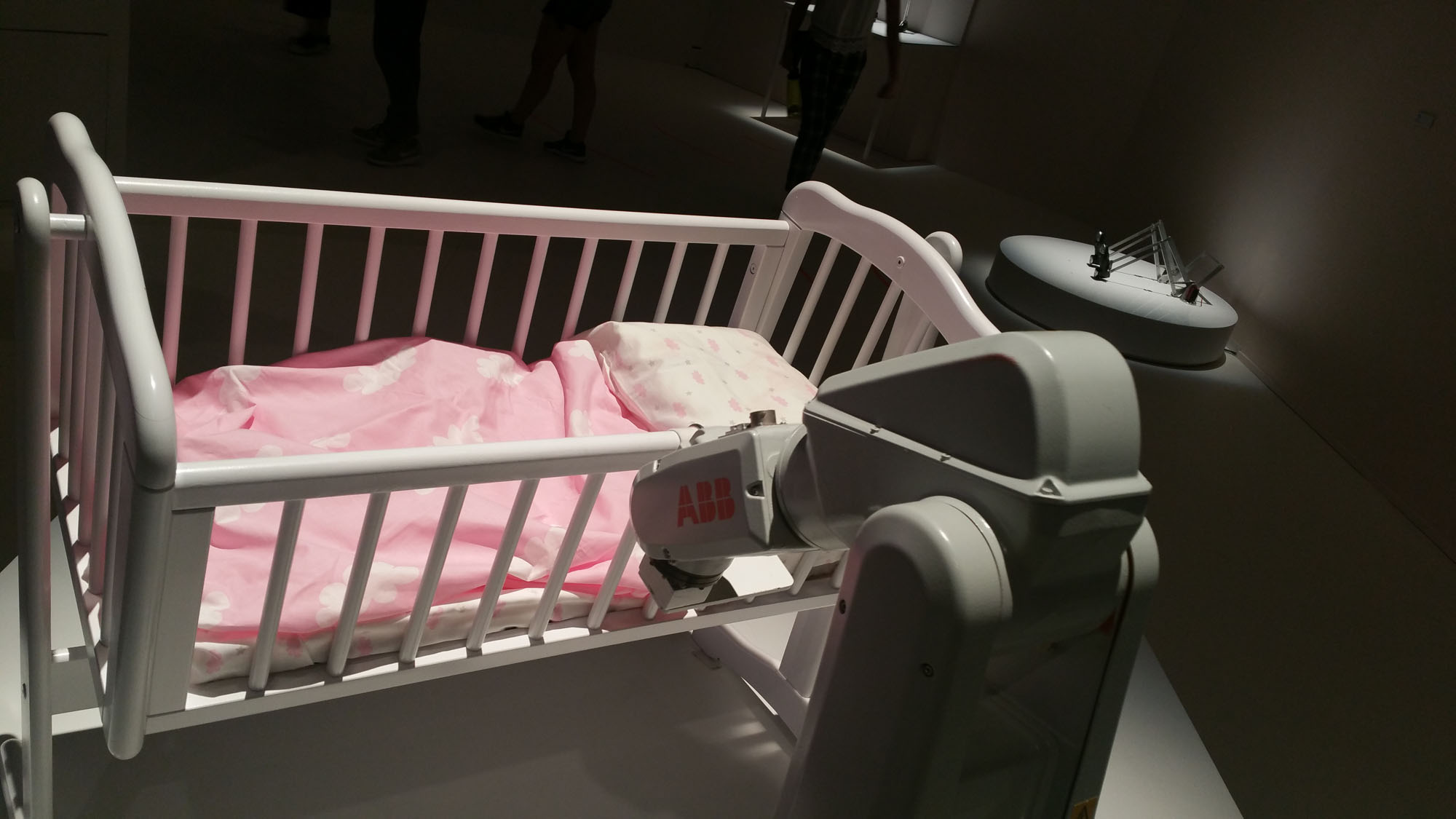 The Optimization of Parenthood by Addie Wagenknecht was a chilling artwork that showed the other side to technology. A robot arm would start to rock the cradle once a cry was registered. It might seem like a good idea that would help parents to parent their child. However, on a closer look, it might not be as ideal as it seems to be. Having a robot arm as the nanny would remove all kinds of human interaction and replace it with algorithm and sensors. It would be a pity to miss all the moments with the parent’s child, having all such interaction to be replaced by an automatic system.

In conclusion, technology and human enhancement is the tool that could allow us to have a more comfortable future. However, abuse of such tools could have repercussion on our future generations and the responsibility falls on us to use it carefully.

A fun fact, a cyborg is defined

by a person whose physiological functioning is aided by or dependent upon a mechanical or electronic device.

By that definition, a regular person wearing glasses or a handicapped sitting on a wheelchair were both also considered a cyborg. So the future of humans and cyborg living side by side were already happening in today’s society. The visions and ideas exhibited in Human + might not be so far-fetch after all. 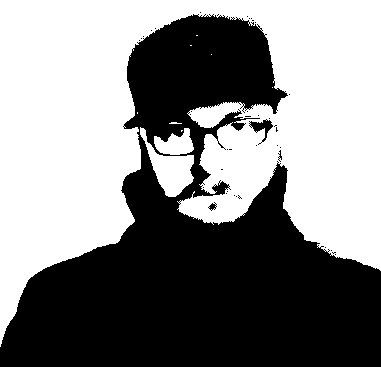 Bold3RRR by Jon Cates was an art piece that explores the possibilities of our relationship with technology, of how noises and glitches were the product of our crafting of the digital world. It was a poetic expression of our current expectation of the mechanics, that it was a perfect and clean environment for us to utilize, but Jon Cates thought otherwise. Jon Cates believed that the new media was imperfect, “dirty”. It implies a humanistic side to our media, that we are imperfect, therefore the crafting of our technology should not be perfect either. The art piece further explores the importance and possibility of accepting aberration in our media.

The work brought new perspectives to our society, to how we view our social media or “techno-social”. It was the exploration of how we “contaminate” our “third space” through interactions of our own and making technology humanistic. I was unaware of such interaction or “contamination” until I had read through the interview. I felt strange and could not agree more with Jon Cates. It was such a natural behavior for me to make all my space (for example, social media and my own desktop) my own, it was too subtle for me to realize until the reading. It had opened my eyes to how humans behave and the possibility of how our behavior changes our virtual surrounding.

Bold3RRR and the meaning behind the work were closely related to our next lesson that is Desktop as Mise-en-Scene. If the “third space” is our playground for us to socialize and interact with one another, then I would use the same metaphor and visualize our Desktop as our “house” or “living room”. It was the virtual space that we used as our shelter, for work, play or entertainment. It changes according to how we wanted our “living room” to feel. Therefore, if one would be streaming and using Desktop as a background, it would be the equivalent of inviting the audiences to your virtual home. It should be similar to how the Videofreex broadcast their content, using their house as their mise-en-scene and audiences were able to interact with them through telephones. However, in this case, we would replace the house with our Desktop and the audiences were interacting through Facebook chat instead.

In conclusion, BoldR333 by Jon Cates was an eye-opening read for me. It made me realized my own behavior and how the public interacts with technology.